You certainly can’t accuse Arnon Kartmazov of having led an ordinary life. Born in Russia, his parents immigrated to Israel when he was around eleven. As is normal in that besieged country, he did his mandatory military service with the Israeli army and saw combat in Lebanon. In his civilian life, he worked in a blacksmith shop, learning the trade of forging ornamental ironwork.

Having a gift for languages, he then moved on to employment with a U.S. government agency as a linguist in the Far East. Eventually, he found he was unsatisfied with that career and apprenticed to a traditional Japanese knife and tool making shop, where he spent the next 12 years learning to craft superior quality blades.

Once he had mastered that trade he moved to the U.S. and in 2000 he settled in Portland, Oregon where he opened Bridgetown Forge. (For all you non-Northwesterners, Portland is nicknamed “Bridgetown” because of all the bridges over the Willamette River running through the center of the city.)

Arnon specializes in ornamental ironwork (hooks, hangers, gates, fireplace fronts, tool sets and similar items), handmade blacksmithing hammers, and custom knives. He also offers classes to those wanting to learn these same skills. While he produces a variety of outdoor knives, most of his blades are currently aimed at the huge gourmet and professional cooking culture this city is famous for.

TWO DAYS IN THE SHOP

I recently spent the better part of two days in Arnon’s blacksmithing shop where we discussed his equipment and I watched him hand-forge two knives. The large spacious building in an old industrial area is filled with a huge collection of power hammers, gas powered kilns, blacksmithing anvils, hand tools, traditional Japanese knifemaking equipment, steel bar stock and belt grinders. I’ve been in a lot of custom knifemaking shops over the years but very few are as large or well equipped as this one.

There is little argument in foodie circles that the Japanese produce some of the finest kitchen blades in the world, and most gourmet chefs are also sold on the traditional Asian knife patterns. Given his background, it is not too surprising that most of Arnon’s kitchen knives tend to follow Japanese styles with a special emphasis on the all-purpose santokus and the single-bevel edged slicers.

Arnon walked me through his entire process for producing these knives, starting with selecting the steel bar stock from his many racks. This was then heated red hot in the kiln and the handle tang of the knife pounded to shape by his skilled use of a hand hammer on an anvil. Once the tang was created, the blade was forged to shape by a combination of the power hammer and anvil work.

While Arnon told me that to speed up production, he normally heats more than one blade at a time, the entire process took around an hour for each of the two blanks I watched him forge. At this point the blade was roughly 90 percent finished, with the surface requiring smoothing and the edge sharpening. From here out, the belt sanders and his huge, water cooled sandstone wheel took over.

Traditional Japanese kitchen knife handles normally consist of a simple drilled out wood shaft and an oval collar at the base of the blade. Though modern knives often use a plastic collar, the highest grades of Japanese knives feature buffalo horn.

I noticed that all of Arnon’s knives had iron collars. Knowing his background, I asked why he didn’t use horn. He told me he had tried horn, but it shrinks and swells too much in our ever-changing Northwest climate and he could never keep a collar tight on a handle. This resulted in too many knives being returned by customers. He then showed me how he heats and hand hammers to shape the iron collars he does use right there in the shop.

Anyone who uses Japanese style kitchen knives has probably already discovered that the “experts” insist that they must be sharpened on waterstones. You then also find that the working surface of waterstones requires “flattening” on a frequent basis to work most efficiently. There are a number of different commercial flatteners sold for this purpose but Arnon was quick to show me his own personal method.

Pouring a partial bucket of water on his concrete shop floor, he dropped to his knees and worked the stone back and forth across that surface for a few minutes. It seemed to work, as a brief time later he was honing one of the knives he had made for me to a razor sharp edge.

Eventually, Arnon and I settled on him making three knives for my evaluation: a large 1085 carbon steel Asian style cleaver, a 15N20 Swedish steel 8.25-inch santoku, and a 5160 carbon steel 7-inch tube handled “camp knife.” He also threw in a left-handed grind kiridashi (a type of single-bevel Japanese carpentry and general utility knife, because he wanted to convince me that this style of blade is superior to a double-bevel.

Santoku is said to mean “three virtues,” which is a reference to its all-purpose nature and ability to serve as a slicer, dicer and light chopper. It seems to be a fairly recent introduction to the Japanese cutlery family. Basically, it was created as a utilitarian kitchen knife for modern home cooks who were more interested in simplifying their lives than in following tradition. They have since become very popular in the U.S. and often serve as an introduction to Japanese pattern knives for many cooks.

Arnon’s proved to be extremely thin-edged and lightweight (7 ounces). Though he makes many smaller versions of the style, I asked for a large one as I felt that would provide a better match to my own Chinese and Thai based cooking style. Like most hand-forged knives, the 15N20 blade requires a certain amount of care to prevent rust. The upside of this is that his blades are very easy to sharpen and take an incredibly keen edge. I’m especially fond of santokus for making dishes that require cutting small quantities of various herbs, spices and vegetables, like my favorite Thai curries. For those who feel cutting paper thin slices off a vine ripened tomato is the ultimate test of a kitchen blade, this knife will make a believer out of you!

The “camp knife” is a little unusual. Arnon forges the one-piece blade with an all steel, open-end, tube handle. This is a fairly common type of construction in most of Asia for plain working knives, but I haven’t seen it used much on higher grades of cutlery. Through a slight mix up in communication, he ground my 7-inch-bladed knife with a right-hand single-bevel (I’m left-handed) when I thought I had asked for a double-bevel.

The saving grace here is that both sides are so thin I didn’t find this to be a particular handicap for me. Defining what “camp knife” actually means varies a lot with users. For me, it is primarily a food prep blade for use under field conditions that is also heavy enough to serve for mixed camp chores. Arnon’s is close to my ideal size and shape for this type of use. He also makes larger ones for those looking for something a little heavier duty.

The cleaver is probably the one blade of Arnon’s my personal jury is still out on. Americans have been convinced that the Chinese cleaver is a very thin, lightweight blade that is only used to slice and chop soft materials. Most of those sold in this country even come with a warning label that they are “not for bone chopping.” Actually, in China cleavers are made in several different weights for varying uses.

Chinese often prefer to prepare poultry and waterfowl by chopping them into wok stir-fry size “bone in” pieces. The locally made cleavers I found most common there were of medium thickness and could be used both for soft materials and light bones like chicken, duck, fish and pork ribs.

Arnon felt he could forge a blade that would be thin near the point for slicing and thick near the handle for light bone chopping. What resulted is a fairly heavy blade that weighs a full 21-ounces, is 7 inches long, 3 ¾ inches wide, and ¼ inches thick at the spine. It seems a bit heavy for a handy slicer but a real brute for chopping most anything else. I quickly found my own chicken bone chopping tends to focus on the center of the blade. So far I have zero problems with edge damage and with all that weight behind the blade, it goes through poultry bones like hot butter.

So, do you need Bridgetown knives in your own kitchen? It is probably easiest to start with the reasons why they may not be for you. If you are looking for knives that hold their edge “forever,” don’t waste your money on Arnon’s or any other top-of-the-line blade, there is no such thing. The need for sharpening skills goes hand-in-hand with quality cutlery. Next, don’t even think about sticking these knives in the dishwasher, they must be hand cleaned and dried. Those looking for permanently shiny, polished surfaces will also not be happy with Bridgetown blades. Plain carbon steel knives will darken with use and rust if not cared for.

For those of us who take homestead cutting tools seriously Bridgetown knives still have many desirable qualities. First off, being made one at a time means the maker can work with the user to craft a knife based on his own special needs. Longer, shorter, thicker, thinner, wider, narrower—all are possible. The same carbon steel that some will hate for rusting is an equally strong plus for many knowledgeable users because of its ease of sharpening and keen edge.

In general, I can promise you that all of Arnon’s knives will cut far better than anything found in a “big box store” and that a handmade knife has a special feel that something made in identical thousands will never have.

For more information about Arnon’s knives or his blacksmithing classes, visit his website, bridgetownforge.com or call 504-804-1524. 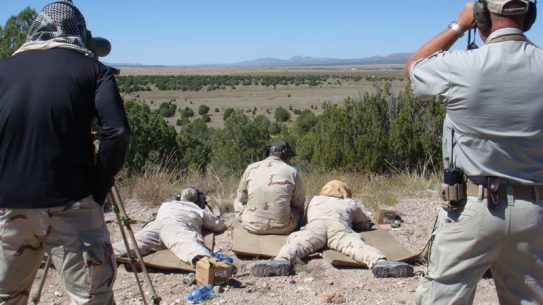 Aggressive bear on the porch? Meth-head invading your home? Defend your homestead!