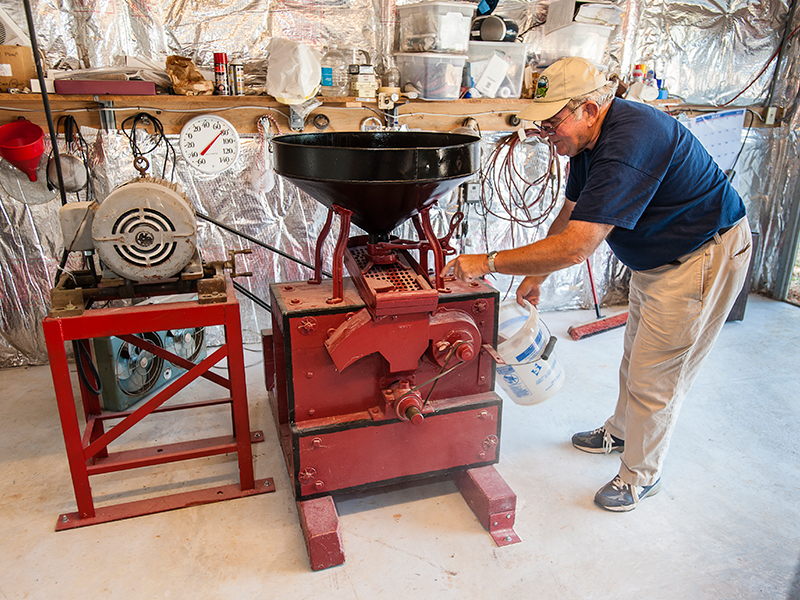 Sometimes sticking with the tried and true is the trendiest thing you can do. But that’s not why Theodore McEntire kept raising Crooked Creek Corn when other farmers in North Carolina were planting the higher-yielding, disease-resistant varieties that were developed after World War II.

Peaceful Valley Farm was a dairy back then and yield was not that important nor was the fact that Crooked Creek Corn is an open-pollinated white corn native to America—a true heirloom. It probably originated in Eastern Tennessee. Theodore didn’t know what his son John later found out: As far as anyone knows, the McEntire family farm was the only place in the United States where it was still growing.

“The main reason my father kept planting the seed was because he liked the grits and cornbread it made. We all did,” John explained. “Moonshiners around here liked it, too. We saved the seed each year and kept planting it.”
The corn took its name from the creek that runs through the farm property in Old Fort, North Carolina. It was growing there when the first McEntires settled the land 140 years ago.

When John and his eight brothers and sisters were growing up, the family didn’t have a lot of money but they always had plenty to eat. Saving, not buying, seed was a tradition as was stone grinding their own cornmeal and grits, making sorghum molasses, and growing all their vegetables.

“I was the next to last to leave home,” John said. “The morning I left for college, my dad gave me a $10 bill. That amazed me—it was the only money he had ever given me. Growing up, we kids didn’t know there was a way to live other than go to school, come home and work.

“When I left, my dad hired a young man to help around the place. That didn’t work out and he decided to close the dairy and raise beef cattle. He still kept growing a small amount of the corn,” he recalled.

John majored in math and chemistry in college and became a high school teacher in Glenwood, not far from the farm. After a grade school teacher named Karen Laney captured his heart, they married and had four children. His career was going well but Peaceful Valley beckoned.

“I was teaching but wanted to keep a finger in the old family farm and help my dad grow some of the crops. When he was out of the picture I continued to farm, more as a hobby than anything.”

He increased the acreage planted in Cooked Creek Corn but the farm was still a hobby. That started to change when John, Karen and daughter Lindsay decided to bring school kids there on field trips. “We started thinking, ‘Wouldn’t it be wonderful to show kids where their bread comes from, how to stone grind cornmeal, things like that? I had always been interested in antiques and we had all this wonderful old equipment on hand and barnyard animals they could pet. To our surprise, there was a lot of interest in these little farm tours,” John said with a huge smile.

But most surprising was the demand for Peaceful Valley’s cornmeal and grits. People wanted to buy them after watching John at his mill. Before long he acquired a license to sell meal and grits anywhere in the United States. And although Peaceful Valley has never advertised, the operation has grown by word of mouth.

Times were hard in Appalachia and locals began to think of ways to help the tobacco-based economy find new ways to generate income. John became involved in the Appalachian Sustainable Agriculture Project and one thing led to another.

He became friends with Dave Bauer, the owner of Farm & Sparrow Bakery, which uses Old World methods to make bread, pastries and cookies. Dave asked John to provide Crooked Creek Corn grits for him to use in his Heirloom Grit Bread and cornmeal pastry dough.

Before long, Dave asked him to plant Turkey Red Wheat, a grain that came to Kansas in the 1870s with Mennonites fleeing the Ukraine to avoid persecution by the Tsar. It thrived in Kansas and became the main wheat variety planted on the Central Plains, only to be replaced by higher-yielding varieties in the mid-1940s.

John planted seven acres and is about to plant more. His next venture for Dave is to plant Wrens Abruzzi Rye, an open-pollinated, non-hybrid variety. He has set up another stone mill to keep up with the demand for his stone-ground corn and wheat. “I have been amazed at the demand from restaurants,” he said.

As tickled as John is to be supplying Crooked Creek Corn and Turkey Red Wheat to Dave Bauer and others, the latest buyer of his corn takes him down memory lane to the days when his uncle made moonshine.

“When I was growing up, there were five moonshiners within four miles of here. We never made it here but knew all about it. About a year ago I got a call from a woman named Troy Ball asking if she could buy 100 pounds of Crooked Creek grits. I said, ‘Yes.’ The next thing I knew she drove up in a Mercedes. As I was helping her load the sacks, I asked her what she was planning on doing with the grits. ‘Make moonshine,’ she said.”
John saw this as a great opportunity for bartering and made her an offer.

Troy had tasted corn from all over North Carolina and found Crooked Creek to make the best moonshine—“as smooth as silk with vanilla oak undertones.” She described the whisky made at Troy Ball & Sons, the distillery in Asheville, as “100 percent corn whisky like heritage moonshine.”

After their first meeting Troy and John struck up a friendship that led to John’s latest venture.

Her moonshine is winning awards and Crooked Creek Corn is used in its production. And the pair have formed Crooked Creek, Inc. to sell his grits, cornmeal, whole wheat flour and whole rye flour.

The last thing John ever thought was that he would be a player in the trendy worlds of artisanal breadmaking and legal moonshine. But he is, and he’s enjoying every minute of it. He was quick to add that he’s not in it for the money. “What I want is to preserve the heritage and history of this place and the traditions we grew up with.”
Retired now, he and Karen delight in showing kids the farm, and telling them about the old ways and hosting events and pottery classes in the milking barn where he built a studio to throw pots, another of his passions. 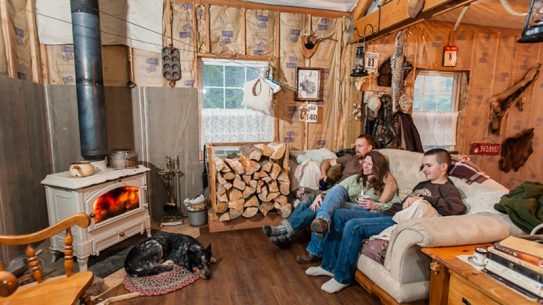 Answering The Call To The Wild

Off-grid in Idaho, the Trayers build the dream of self-sufficiency that's loaded with endless...