Wild ginseng is far superior to the cultivated American or Chinese product,” exclaimed Robert Eidus. “That’s why the Chinese will buy whatever amount is shipped to them. It contains more ginsenosides, the therapeutic component that promotes overall health and relieves stress.”

Robert is passionate about the unassuming wild American plant. He grows, harvests and sells it but that’s not all. He’s a tireless promoter of ginseng as a high-value cash crop that can benefit impoverished areas in his adopted state of North Carolina. He gives generously of his time to see that Americans have access to products made from the wild native plant (Panax quinquefolius), which is more potent that the cultivated American or Asian variety (Panax ginseng).

He said, “Currently, most of the American ginseng sold in this country comes back to the U.S. from China and the cultivated products contain minimal amounts of the ginsenosides. Asia does not send back wild roots.”

We asked Robert what he meant by “high-value” ginseng and he said that the potency of roots grown in the wild makes it so. In 2012 one pound of wild American roots sold for around $800, compared to about $50 for a pound of cultivated American ginseng. The older the root, the more potent it is. Ginseng’s fragility adds to its value. Each wild plant needs to produce 100 seeds to replace one harvested plant.

Just how did a 69-year old with a Brooklyn accent—an urban planner before moving to North Carolina and going into the real estate business—become a ginseng farmer and advocate?

“I discovered the real estate business wasn’t who I was. There was a big void in my life—a black hole.”
He became ill and credits lifestyle changes and ginseng with helping to restore his health. After attending a ginseng conference, he said, “It sounds whoo-whooish but I had a mental conversation with a ginseng plant, it was looking for someone to represent it.”

He picked the brains of people he met at the conference. He talked to Gary Stancisk, a builder who was putting up a house for Robert on land he had bought—28 acres of “hardwood cove paradise” adjacent to the French Broad River in Madison County.

“Gary was growing ginseng on his property,” Robert recalled. “A week after the conference a friend and I took a walk up one of my hillsides and found some growing. We dug up a root, brought it back and I started to learn all there was about it. I didn’t know that it grew wild in North Carolina. Next, I got a ginseng dealer’s license—you have to have one if you want to trade in it. As far as I know I am the only dealer in North Carolina who does not export ginseng to Hong Kong.”

Today his Eagle Feather Farm is also the home of North Carolina Ginseng and Goldenseal Company, which sells seeds, roots, medicinal plants, trees, rhizomes, tinctures and capsules. United Plant Savers has designated the farm a Native Botanic Sanctuary. And Robert is constantly on the go teaching classes about growing medicinal herbs and promoting the ginseng industry in this country.

He was quick to admit that his success with ginseng didn’t happen overnight. “It has taken me 19 years to make a go of it. I started when I was 50 and am now 69. Fortunately, I had rental houses to carry me through. This idea of farming in the woods is finally gaining traction and I am getting better at it. ‘I tell people, if I can grow ginseng, anyone can.’”

FARMING IN THE FOREST

Robert thinks that forest farming, an aspect of permaculture that harvests wild herbs, plants and trees sustainably, is the best way to grow wild American ginseng. In the wild it grows in shaded woodlands throughout mountainous areas of the Eastern United States and Canada, flourishing on north-facing slopes under a deciduous hardwood canopy. The most potent roots come from plants grown in this environment, although plants can be grown under shade cloth.

Before forest farming and harvesting ginseng, you need to know three things: It is illegal to harvest any but mature plants, which have three or four prongs, each with five leaflets on it and four buds on the neck of the root; you only harvest a plant when the berries are ripe (red); and always leave some mature plants in a ginseng patch.

The forest farming aspect begins when you start your own patch in the woods on the forest floor. “After harvesting a plant, sow the ripe berries, ¾- to 1-inch below the soil, 2 centimeters deep, to be exact,” said Robert. “Then, be prepared to wait seven years for a plant to reach full maturity. By law, you can sell roots overseas when they are five years old but they still do not have the full range of medicinal components.”

Ginseng and goldenseal grow in the wild together and Robert duplicates nature in his forest beds. Other than giving the plants a little water when the soil starts to dry out and watching for fungal problems, they require little care. Goldenseal helps with internal mucous activities and is taken short-term. It also alleviates skin and eye disorders and is a good companion plant since it has anti-fungal properties that protect ginseng. 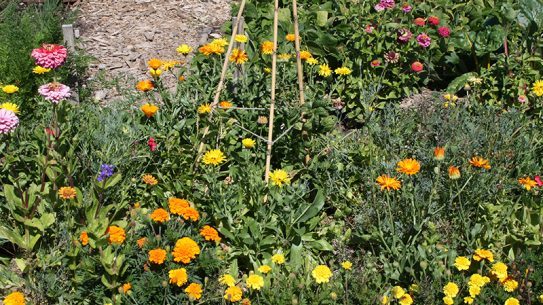 Bury it, cover it and watch gardens grow healthier and for longer. Join the...