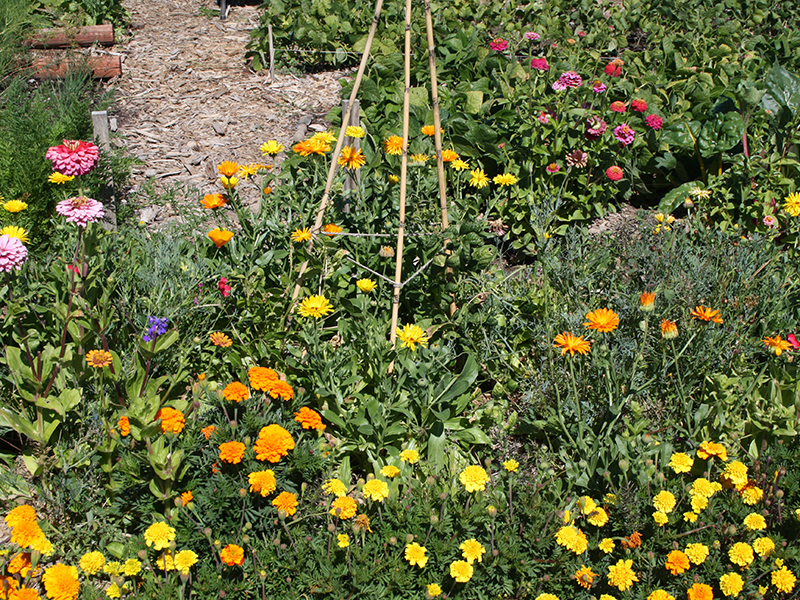 I’ve been growing food for well over 30 years; 23 of those have been in Montana where water and good soil are scarce. But it’s only been in the last year that I’ve had an “ah-ha” moment, and understood the simple beauty of permaculture, or permies.

“Permaculture is optimizing the symbiotic relationship between nature and people so I can be lazier. If you do a permaculture system, you don’t have to do anything but harvest,” says Paul Wheaton, a permaculture expert from Montana who spreads the good news through his website, podcasts and talks. Permaculture techniques bring the garden closer to its natural state, requiring far less care.

This realization clicked for Paul Gautschi, a master arborist and avid gardener for over 40 years, several decades ago when he battled insufficient water from his well and weeds in his Washington orchard. When he walked into the nearby woods, and found moist, nutrient dense soil below the trees where duff had built up for years, he had his answer, and spread bark chips underneath all of his fruit trees. “I haven’t fertilized or watered my orchard in 34 years,” he says.

It worked fabulously well, yet it took him many more years until he applied the same process to the garden. “Everything in nature is gorgeous; it’s covered,” he says. “The cover is like a sponge. It holds moisture.”

When he covered the ground everything changed. No longer did he battle weeds, water or fuss with the garden. He simply planted and harvested. As he points out, in the Book of Genesis Adam and Eve were directed to tend the garden, not work it. This is a way to get back to that concept.

Since nature abhors bare ground, covering it is the key. Gautschi says he’s used straw and other materials as a covering, yet prefers wood chips because they stay in place and gradually break down to create a nutrient-rich planting medium. He recommends using no more than 4 inches of chips if you’re going to plant seeds. When it’s time to plant, pull back the wood chips to the ground and seed directly into the soil. Once the plants are up, push the wood chips back around them.

For an area with sod or lots of weeds, place 6 layers of newspaper on top of the ground, and then spread the layer of wood chips. You will want to let it set for several months to allow the layers to kill the sod or weeds below and soften the soil, but you can put the chips down anytime.

Resist the temptation to turn the chips into the soil. This could tie up the nitrogen in the soil, and make it counterproductive. Gautschi says that the chips are simply a covering. As they break down they create a nutrient-dense and balanced planting medium.

“Scientists couldn’t believe how everything grew (in my garden). The soil test in the wood chip garden is 7.0 pH. This is why I can grow blueberries with celery next to it,” he says.

To maintain the soil, Gautschi says he follows God’s cues by replenishing organic materials in the autumn. He notes that when leaves fall or plants die they are then transformed during the rain and snow of the winter to rebuild the soil. “Every year it gets better and better,” he says.

Tilling makes Wheaton twitch. “It’s awful to see. You should think about building your soil instead of ripping out all of the organic matter,” he says.

Gautschi also sees no point in it. “God never turns stuff in. What’s so scary about tilling is that in the soil you have thousands of life forms. We’re killing and destroying that environment when we till,” he notes.

Once again, Gautschi turns towards covering the soil. “I’ve watched the process. Everything in nature is gorgeous because it’s covered,” he says.

We are conducting an informal experiment at the community gardens in Great Falls utilizing this concept. For years we tilled the 18,000-square foot garden, but after Paul Wheaton’s talk to our group this spring we called off the big tractor. Instead, the majority of gardeners planted and covered their entire garden. Some used grass clippings, others straw, and a fair number opted for a thick layer of bark chips. On the other side, some gardeners turned under their individual plots with rototillers, and chose to garden as they always have.

After a summer of extreme heat and little natural moisture, it’s interesting to see the difference. As a general observation, the covered beds are thriving while the traditional beds struggle except for one, which is immaculately cared for by a retired gentleman. The real test will be next year when the covering is allowed to settle and break down further throughout the winter. But one thing is for certain. There will be fewer weeds because we won’t turn up seeds by tilling the soil.

Retaining moisture is critical in traditionally dry climates, as well as in those parts of the country that are experiencing drought conditions. Wheaton believes hugelkultur is the answer.

“Hugelkultur is emulating the concept of the nurse log,” he says pointing out the logs in the forest that lie on the ground for years with all sorts of new life growing from them.

Hugelkultur is simply piling logs, wood debris and organic materials anywhere from 2- to 7-feet high, then covering them with soil. He recommends planting all over the mound, including adding shrubs and trees. Before long you’ll figure out what plants do the best in particular areas of the contoured beds.

Wheaton recommends building the bed as high as possible because it will shrink, and the more organic materials that are within the pile, the better it will retain moisture. He maintains that a bed will need no additional water after a couple of years. In addition, the composting process bumps up the heat a bit, resulting in up to four weeks of longer growing time on either end of the season.

I built my first hugelkultur bed this spring. Logs are scarce on the prairie, but when a friend called with half-rotten untreated lumber, I jumped at the offer. I put down the wood and also added the enormous sunflower stalks from the previous season’s garden along with other organic matter I found. Since our “soil” is more akin to concrete, I dumped decade-old aged cow manure on the 3-foot tall pile.

The boys planted the hugelkultur bed with pumpkins, carrots, potatoes, beets and Swiss chard—I even think there’s some dill in there. To add to the organic matter, as well as to keep moisture from evaporating, we put grass clippings on top throughout the summer. The pumpkin is climbing all over the hill, and the other plants are doing well despite blistering heat. My next step is to attach another hugelkultur garden perpendicular to this one, creating protected areas within my garden for fruit trees.

While I built up my bed, Brenda Groth of Michigan, who has been practicing permaculture techniques for decades, created a pit in an attempt to eradicate Jerusalem artichokes from a particular area. “I had to dig down 2-feet to get out all of the stragglers. I dug and dug, and I had this big hole,” she says.

She filled the trench with hunks of aspen trees and replaced the soil. On top she planted raspberries, blackberries, and other perennial fruits. Although Groth says this isn’t the type of hugelkultur bed Wheaton prescribes, her plants thrived, despite a challenging season with heat and unusually dry conditions. There is a multitude of info on permaculture techniques, but take baby steps. “Start with a hugelkultur bed that is only 3- to 4-feet tall and 4-feet long. Try it out,” says Wheaton.

It’s easy to create a poly-culture garden where plants are grown together instead of in straight rows. Every plant has something to give and something to take from the soil. By planting them together, they have an opportunity to work with each other.

And cover the soil. Don’t leave it exposed to the elements. As you take steps to create more of a food forest and less of a labor-intensive landscape, you’ll have your own “ah-ha” moment. 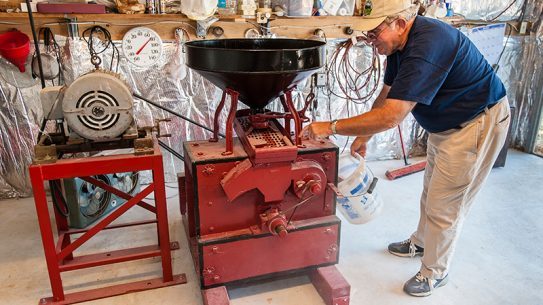 The McEntires go back to their roots to reap Crooked Creek Corn grits, bread...