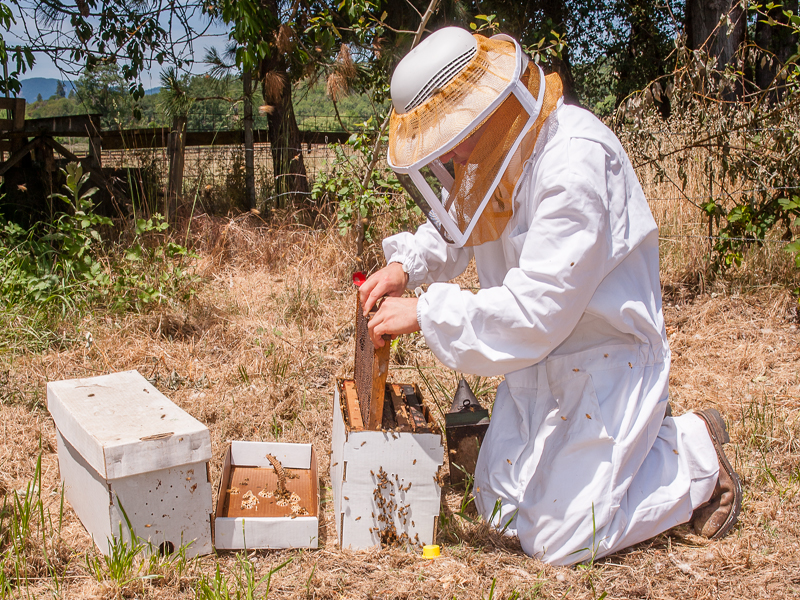 Photo by Thomas Kirchen
Noah inspects the frames in the boxes of swarms he’s collected.
Comment(s)

At age 21, Noah Clipp is not among those in his age group who are wondering what they’re going to do with the rest of their lives. Since his early teens, Clipp has been hard at study and work. And as a budding beekeeper living in a rural Southern Oregon valley, he is learning what it takes to be in business. “I’m the entrepreneur of the family,” he says. “I love to work and see things come to life. It’s a passion.”

His interest in bees came as happenstance. As one of nine children, Noah says that common illnesses were quick to spread from one child to the next. Looking to improve their health, the family took the advice of a friend who suggested that they switch from processed sugar to honey as a sweetener. The reasoning was that honey could help build their immune systems against common illnesses.

The family made the switch—with the positive results—and it wasn’t long before Noah’s father urged him to learn more about honeybees. “I was about 13 or 14 when I started,” he says. “I was fascinated with them.”

He had a brother-in-law in the bee business to help him with his apiary education, as well as a neighbor who worked with bees. “He took me under his wing,” Clipp says of his neighbor who was looking to retire. “I studied bees for about a year.”
Soon, Noah was able to purchase his own beekeeping equipment. He assembled the hives and within the year, began harvesting honey. “I got 30 to 40 pounds of honey [per hive] the first year,” he says. “The average in Oregon is about 30 pounds per hive.” Figuring that a pint of honey weighs about 1.5 pounds, that’s about 20 pints per hive.

But not all was so sweet. “There was a lot of trial and error that first year,” he recalls. “I was scared to get stung. But then—it’s a hive, and they’re honeybees.” So he endured the stings—many times. “I’m immune to it now,” he adds.

Next was learning to deal with the business challenges. “The tough thing is keeping the bees alive and healthy,” he says. Three years ago, despite his best efforts, disaster struck in the form of Colony Collapse Disorder.

“I lost everything—there wasn’t a bee left,” he says of the syndrome, where bees suddenly disappear from the hive. While some blame CCD on parasitic mites, disease or stress on the bees, no one has come up with a definitive cause for the bee die-off.

Clipp spent a lot of money in those early years to build up his hives and now he suddenly had nothing to show for his investment. While losing the bees was a setback, it was also a lesson. “I was too spread out. It was time to scale back down and take care of what I could,” he says. “It’s hard to admit to defeat. And I love to see the bees flourish.”

So he bought more bees to repopulate the hives. Now, he is back to tending 30 to 40 hives. And he’s planning for the future.
“My goal is to have 50 to 100 hives that will help maintain the pollination in the valley,” he says. “I want to do my part in keeping this valley fruitful.”

But it’s the sweet nectar of the bee—honey—that is the heart of his business. So far, Noah has been able to sell all of his primary product without fancy ad campaigns. “Most of what I sell is to friends and by word of mouth,” he says. “Honey is concentrated nectar.” And each type, from blackberry to wildflower to poison oak, has its own flavors and characteristics that he’s learned to identify.

“There are the different colors and textures. You can definitely taste the differences,” he says. “Everything from a light-colored honey to a dark, syrupy honey.”

Honey also purportedly has medicinal properties. “Poison oak honey will help you develop an immunity to poison oak,” he contends. Other types of honey that contain pollen remnants may help alleviate plant allergies.
“Sometime it takes time to realize it,” he says of the immune properties.

Clipp doesn’t harvest all the honey from the hives each season, but leaves enough behind as food for the overwintering bees. During the winter, bees go into a type of hibernation, balling up inside the hive to keep the queen warm. Clipp periodically checks the hives to ensure all is well, and then he’s off to another job, working as the deck boss on a fishing boat that works the coastal waters of Northern California and Southern Oregon.

When daytime temperatures begin to warm into the 50s, the bees begin to fly from the hive in search of food. In the early spring of Southern Oregon, bee food can be found in the pollen of the native alders towards the end of January. “You have to have your eyes open to see what is happening,” he says.

During the spring, summer and fall, Clipp must ensure that the hives are placed in an area where the bees can gather plenty of pollen, be safe from predators such as bears, and be out of direct sunlight so they aren’t baked.

Another business challenge is to keep the hives from swarming, which he’s been pretty successful at achieving so far. A swarm occurs when the hive gets overcrowded and about “half the hive takes off,” Clipp explains. If he’s alert to the potential problem, he can split the hive himself by taking a portion of the bees and moving them to a new hive. “If it swarms, it shows that I’m missing the signs,” he says.

A hive can house anywhere from about 16,000 to 80,000 bees, with large hives having over 100,000 bees, he says. Clipp’s goal is to manage his hives organically by not painting his hive boxes and by keeping them away from areas that may be treated with herbicides. “The whole honeybee thing has turned into a labor of love,” he says. “Beekeeping is addictive.”

Clipp hasn’t yet found an official name for his enterprise. He’s been too busy developing other aspects of the business.

He also sells other bee products: wax, cut comb honey, royal jelly and even the bees. He is also developing his own line of beekeeping equipment.. He has brought his brother into the business to help. “This might end up becoming a family thing,” he says. “You have to be innovative and think outside the box.”

Then there is his pollination service. He takes bees to other parts of Oregon and to California to do their job in orchards. And he is a “swarm collector,” answering calls from local businesses to remove swarms when they are causing problems.

Noah is eager to share his knowledge and plans to head to Scotland this year to help an acquaintance teach young adults beekeeping skills as a way to combat high unemployment. As he puts it, “I see the younger generation helping bring [beekeeping] back to life.” 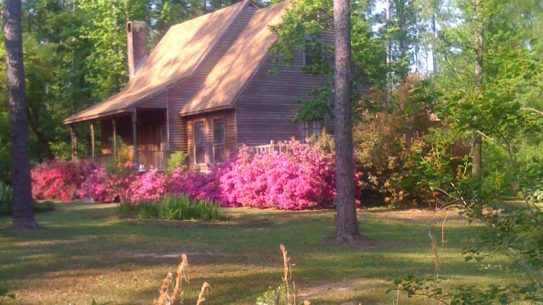