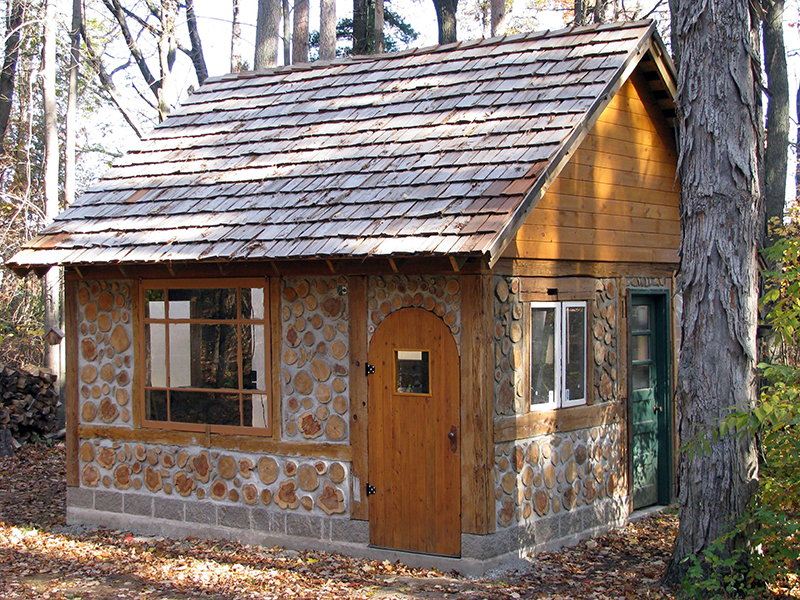 Photo by Cordwood Construction
When the Barchackys of Green Bay, Wisconsin, wanted to build a cordwood garden shed using mostly repurposed material, they called on Richard for advice.
Comment(s)

For seven years at summer’s end, the McAllens and their seven neighbors celebrated the end of mosquito season with a homespun festival. Residing in rural Wisconsin, the McAllens live outside the town of Galesville, along the winding Black River, which jumps its bank during the rainy seasons creating pools of stagnant water—an ideal breeding ground for mosquitoes.

At the party two guests would be crowned King DEET and Queen Citronella while everyone would sing familiar songs with the words changed to be about mosquitoes. A neighbor who’d saved all the blood-sucking insects felled by his bug zapper would cap the night’s festivities by ritualistically dumping them into the bonfire.

The annual rite ended after the McAllens had cycled through all the possibilities for the kings and queens but it mirrored their family’s home: affordable, a little quirky and very do-it-yourself. When Ed and Julie moved to the property in the mid ’80s, they knew they eventually wanted a house that reflected their lifestyle, and though it took a few years and a lot of sweat equity, Ed built them a unique, beautiful house for less than what many people spend on a car. “Neither of us have become big income makers,” Ed admits.

But for the McAllen family, a modest income didn’t prevent them from owning a mortgage-free home and carving out a small slice of paradise for themselves.

Ed got the idea for the house from an article about cordwood (also known as stack wood) homes in an old issue of Mother Earth News. Cordwood construction involves taking short debarked logs and pouring a masonry mixture around them with an affordable insulation, most often sawdust and lime, between the exterior and interior walls.

“I loved the way it looked,” Ed said. “I knew I could do it really strong and efficient energy-wise.”

At the time the McAllens were living on the property in an un-insulated two-room cabin—Ed called it a 13′ x 30′ “tar-paper shack”—with no indoor plumbing and limited electricity. Over the years, Ed slowly made upgrades: increasing the cabin’s electric-load capacity, insulating the walls and installing running water.

“At the time we thought of it as an adventure,” Julie said.

They moved to the property in 1987 and for years endured trips to an outhouse and hauling their own fresh water from town. They have a scrapbook from this time commemorating the ups and downs of close-quarters life; pre-modern living that includes a joyous photograph of them inside the cabin’s first working shower holding a sign commemorating the occasion.

In 1992 Julie learned she was pregnant. With a family on the way, the dream home could no longer be deferred. Ed’s many projects upgrading the cabin and working with his father, who had been a handyman and carpenter in northern Wisconsin, had prepared him for what would be his biggest project ever.

Ed also had done his research on cordwood construction, reading books and articles on the subject and attending conferences. He contacted Jack Henstridge, an author he’d admired who wrote the book Building the Cordwood Home. Henstridge, who’d made his own cordwood home in the shape of an airplane, convinced Ed that the best, most efficient shape for a house is a circle.

“He said if he were to do it over again, he’d build it in a circle,” Ed said. The circular shape maximizes living space. “If you look around in nature,” he said, “we’re the only animals who build their homes square. With a round house you also don’t have to worry about working with corners, which makes construction simpler.”

The first step was finding enough wood. Luckily, Ed knew someone who allowed him to clear his land of pine trees for free. For weeks, after he got off work at his factory job he’d cut the trees, remove them of bark and cut them into 16-inch pieces, using a unique lead-weighted table with an attached chainsaw that worked like a paper cutter for large pieces of wood.

He traded a friend an old deer-hunting rifle for the chainsaw table. And this thriftiness is a recurring theme in the McAllens’ stories about their life; particularly Ed’s about building their cordwood home. Julie said the dumps in Northern Wisconsin were “our mall,” as vacationers’ stuff ends up there at the close of the summer season.

Ed built their house integrating into his design plans what he could get for free, barter for or buy as cheaply as possible. “Everywhere I could use recycled stuff instead of buying lumber I saved a lot,” he said.

Ed can point to almost any feature in the house and tell you how he came about the raw materials. The wood for the bed in the bedroom came by trading some homemade sausage for it.

One story about some of the wood used on the roof’s substructure involved a trip to a man who sold homemade birdhouses. “He grew up in the Depression, so he saved everything,” Ed said. Behind the man’s house were piles and piles of scrap wood. Ed bought all of it for $200.

In 1993 Ed spent the entire summer cutting wood on a friend’s land, and for two years he let the cordwood dry—a crucial step in cordwood construction. Otherwise the wood can shrink drastically, creating large gaps in the home’s walls.
In 1994 Ed quit his factory job and cashed in his 401K to work on the home full time. “We basically lived on savings while we built it,” Ed said.

In 1995 he cleared the home’s site and laid a 48-foot-base with two connecting circles of perforated drain tile, gravel-sand mixture and insulation topped with a concrete slab floor with thicker concrete and rebar around the edge holding it in place. The base is similar to a design favored by Frank Lloyd Wright for its simplicity. The rubble-trench foundation uses compacted stone to minimize concrete and maximize drainage.

During this time Ed was also collecting unique glass bottles—of all shapes and sizes. One of the interesting properties of a cordwood design is that you can put almost anything in the mortar. The wood, Ed explained, isn’t load bearing. It’s the concrete doing the heavy lifting, so throughout the walls he interspersed bright pockets of sun-lit color provided by glass bottles he’d collected, fusing two bottles together when necessary to make them long enough.

On the second floor Ed arranged some bottles in the wall in the shape of the Big Dipper, the family’s personal constellation. “You put them into a wall and turn junk into magic,” Julie said.

Since he designed the floor plans for the house, Ed was always looking for ways to save on costs. One of the biggest savings came from designing the house around the windows. Knowing he wanted a lot of natural light, Ed had been prepared to spend quite a bit on windows, but instead of being tied to exact dimensions, he knew he only needed them to be “long and tall” to accommodate his round design.

At the home-supplies warehouse store he found a bunch of custom-made windows that had been returned, and since the different sizes wouldn’t work for most homes, Ed got all the windows for his house at a steep discount—19 windows for about $1,500.

On October 18, 1998—five years after Ed began collecting the wood for the home—the McAllens moved into their new house. By then Ed and Julie had two girls, who were 5 and 3 at the time.

“It was just wonderful having a bathtub,” Julie said, “and not be cleaning the girls in the sink.” The timing was fortuitous because the tiny cabin had recently been irreparably damaged during a severe thunderstorm.

On a recent Saturday afternoon, Ed walked around the house pointing out different features. The wood in the walls is rough-hewn and all different shapes. In one part of the wall the cordwood is arranged in a way that resembles the face of a clown, which wound up being appropriate because in recent years both Ed and Julie have gone to clown school and now perform locally in parades and at local nursing homes.

“The house knew before we did,” said Julie, laughing.

The 1,600-square-foot house ended up costing them about $23,000, not including the well and septic system or the price of the land. Of course, the work was intensive and time consuming, taking Ed about three years to complete almost entirely on his own. Ed literally put his sweat and blood into building the home. He used his fingers to caulk around the cordwood for a seamless, airtight seal, working his fingertips until they bled.

Julie said she’d sometimes worry he was going to dehydrate himself from working so hard. “He was so intense, during that time he just let his hair grow down his back,” she said.

Ed grew a long ponytail, which he cut off and put in one of the bottles mortared into the wall. In another bottle is a squirrel skull, inside jokes that only the family knows are there, and a visitor would never even notice. The home is heated by a woodstove, the concrete by chimney radiating heat. The home’s well-insulated thick walls keep it warm in the winter and cool in the summer, and the interior design is open and quite welcoming.

With a river just outside and a 3,000-acre public hunting preserve across the river, the McAllens live simply. Ed built a walk-in root cellar that he keeps well stocked with home-canned food. Their oldest daughter is now in beauty school, and their youngest has two years of high school left.

Ed’s job as a courier gives him time to daydream about new projects. Julie would like to move into town eventually, though Ed cannot imagine doing so. If they do sell the house, they’d make a tidy profit since they never went in debt to build it, and he estimates it’s now worth around $200,000.

“This house was the neatest thing I’ve ever done!” he said. 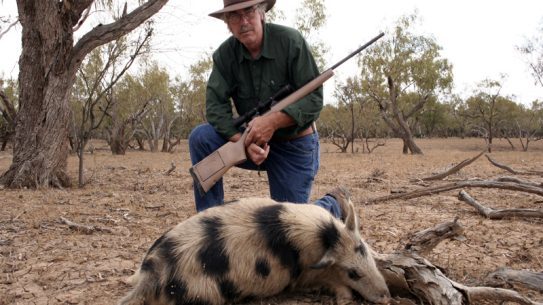 Defend Your Homestead From Wild Hogs

Don't let a mob of pigs ruin your precious land. Keep ’em down for...