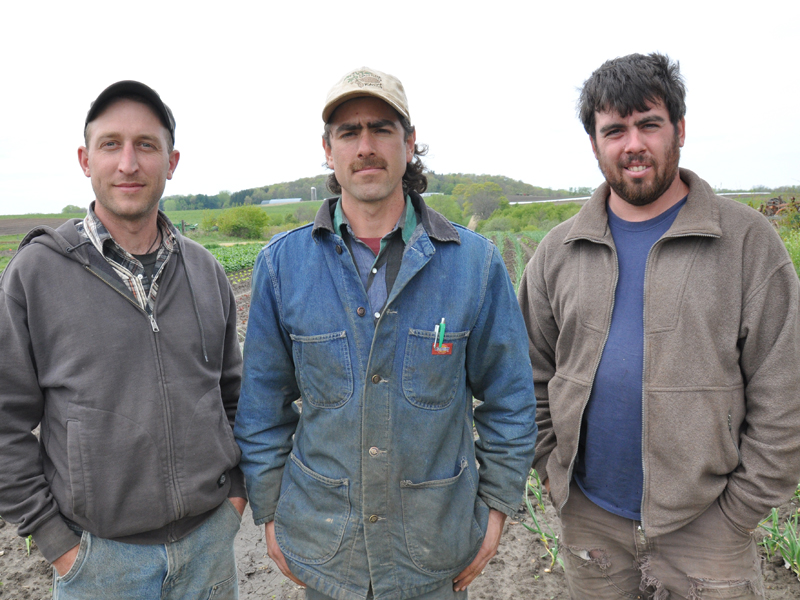 Josh Engel can recall the moment he knew he wanted to live and farm in the Driftless Region of Wisconsin where he was born and raised. He’d been away for a while, travelling, and was returning home to Soldiers Grove after driving through an endless brown expanse.

“It was the most magical thing, after sitting on I-90 you drop into the Mississippi River Valley and you’re just like, ‘Whoa,’” Josh said.

The Driftless Region of southwest Wisconsin where Josh and his brother Noah Engel started Driftless Organics with their friend Mike Lind in 2006 is characterized by a rolling landscape with bluffs and valleys. In the summer the land is impossibly green, and it’s here where they tend the earth on a patchwork of three small farms growing, as Josh puts it, “everything we can.”

There are a multitude of caves, underground streams and cold springs. Near Josh’s house an old-fashioned bathtub collects clear water gushing from the side of the earth. Nearby hang two drinking cups.

“That’s called Bathtub Spring,” Josh said, pointing it out as he drove by in his pickup truck, a fresh-picked morel mushroom on the dashboard.

The region is so named because it wasn’t impacted by the movement of glaciers, and therefore is without the sediment, or “drift,” the vast sheets of prehistoric ice left behind in the areas to the north and east of it. Thus the region is “driftless.”

Like any place, there are downsides to living here. A hard rain can easily turn into a flash flood, and the winters can be harsh.

“But it’s a beautiful area that’s quiet and fun,” Josh said. Noah is 28, Josh is 30 and Mike is 34, and in the summer Josh said they spend their hours when not working biking the country roads or canoeing the many creeks. “Nowhere else has more water than this area,” he said.

On its website, the guys describe the Driftless Region as home to “organic pioneers, musicians, back-to-the-landers, farmers, entrepreneurs, artists and conservationists.” And it’s here, among them that all three of the young men wanted to put down roots—to live and work and play.

“We’ve kind of been in cahoots for awhile,” Noah said of his partnership with his brother.
The Engel brothers started farming early in life. Josh was 11 and Noah was 9 in 1994 when they began setting up at farmers’ markets selling the organic potatoes they grew in their parents’ backyard. They called the business Rainbow Potatoes because they offered so many varieties of spuds.

“It was just kind of a summer project,” Josh said. “We had to help our dad out a lot around the farm, too.”
The Engel brothers grew up on their parent’s dairy farm—one of the first certified organic dairy farms in the country–and they learned a lot about farming by working it. But the potatoes were always his and his brother’s business, and their parents allowed them to keep the money they made from it.

“That would be a great picture, us at the farmer’s market at that age,” Josh said. “But I don’t think we have one.”

What began as less than half an acre of potatoes when they were boys has grown into a thriving small business with more than 100 acres of vegetables, fruits, grains and sunflowers all of which are grown within a few miles of the home where Noah and Josh were born. Their parents recently sold off most of their dairy cattle because their other careers—their mother is a veterinarian and their father certifies organic crops—were commanding most of their attention.

Josh said Driftless Organics is busy, too. “The market demand has probably been more than we can handle,” he said.
Half of Driftless Organics’ business is community supported agriculture orders where nearby residents buy a small portion of the farm’s crops and receive a regular supply of fresh produce during the growing season. To keep the CSAs interesting, Driftless Organics grows between 80 and 100 varieties of crops every year.

“We’re growing everything we can for CSAs, trying different things,” Josh said. He pointed out some rows of aronia berries. “That’s an experiment.” Later on he pointed out an herb they were growing called calendula—another “experiment,” he said.
The other half of the business is sales to cooperatives and grocery stores, with Whole Foods comprising about 10 percent of the farm’s business. They split the duties pretty evenly between the three of them: Josh is in charge of delivery and budgeting, Noah is in charge of machinery and maintaining the equipment and Mike is in charge of coordinating the CSAs, ordering seeds and managing crew.

“We all knew this was something we wanted to do full time,” Josh said.

The average age of the American farmer in 2011 was 57 and is expected to rise, in part because the price of land and start-up costs for young farmers are formidable. Josh said he’s heard stories about the difficulties young farmers face, but he said that having a small home base to begin with on their parents’ farm helped him and Noah.

They’ve expanded gradually by leasing nearby land, and he said they’ve taken out some large loans from the bank. After high school Josh attended a few years of college, and Noah went to work on larger organic farms.

“I wanted to get more experience in vegetable farming from some veterans,” Noah said. He said the experience gave him time to mature and develop a management style. “They were able to deal with an 18-year-old who barely knew anything but thought he knew everything.”

It was at another farm that Noah met Mike, eventually bringing him on board to his and Josh’s upstart business, which at the time was called Engel Brothers. When Mike joined as a partner, the name changed to Driftless Organics, a name they chose to reflect their commitment to the region.

Mike had 12 years of experience, including an internship in Washington D.C. and some farming experience in Europe. In addition to the work he does for the Engels, he has a business selling grass-fed beef that he markets under the Driftless brand.

The farm has thrown some curve balls at them. The unique topography of the region with its peaks and valleys causes severe flooding problems during the rainy season because many of the crops are in low-lying land. “Just learning how the land reacts to weather” has been the biggest learning curve, Mike said, standing in front of a field of newly leafing crops.

They’re currently in the process of leasing higher land to avoid the flooding they’ve encountered in the past. And as the years pass, they’re getting a firmer handle on all the different crops they grow. They currently grow about 35 acres of vegetables, 20 acres of cover crops and 100 acres of grains.

It’s the daily learning and variety of work the farm affords that they enjoy. “Every day is different,” Josh said. And Noah appreciates “the freedom to move from one project to another.”

In the summer months, when they have about 15 additional hires working, Josh said they try to rotate their jobs so they don’t get burned out. The work can be labor intensive. “Almost every single thing we harvest is touched by hand,” Josh said.
Still, Rachel Rebman, one of the farm’s full-time year-round workers, said it’s a fun job. “I actually didn’t think I was going to be working on a farm for so long,” she said as she prepped tomato plants in the greenhouse. “But I like working outside a lot, and I can’t see myself going indoors again.”

Outside the farm’s office, which is an old farmhouse with a wood-burning stove for heating, sits a floating inner tube on the porch. The inside is charmingly cluttered with a couple of bicycles, muddy boots, farming catalogs and various paperwork related to the farm—a mix of fun and business. Josh currently lives here with his wife, but he said they’re going to move into their own house soon and keep renting the farmhouse for Driftless Organics.

Across the street is the old cheese factory they currently use for storing, washing and packaging their produce. In late summer they throw a “harvest party” and invite all their CSA members to a barn dance and farm tour.

“We like to keep it fun,” Josh said. For more information, visit driftlessorganics.com. 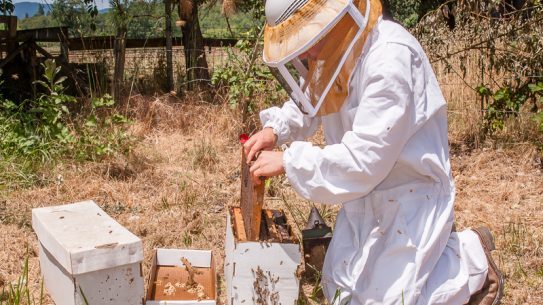