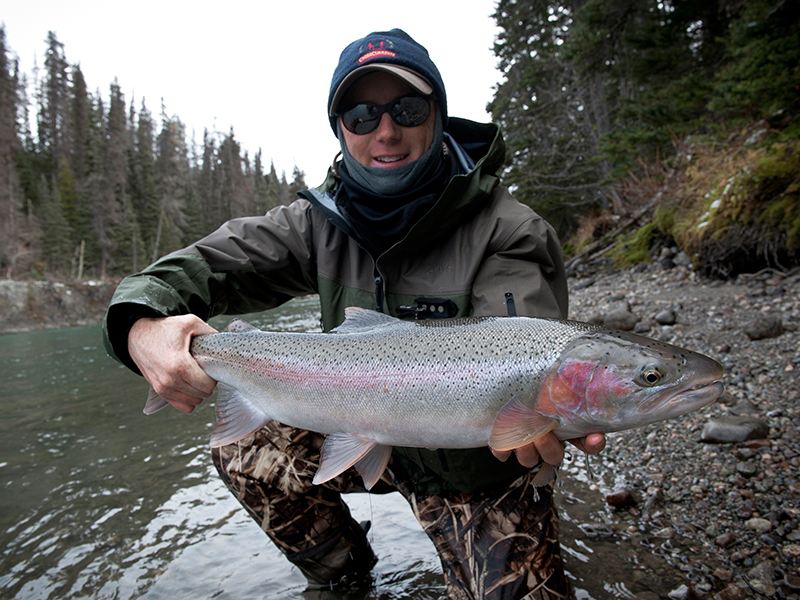 1 of 5
Get Hooked On Steelies 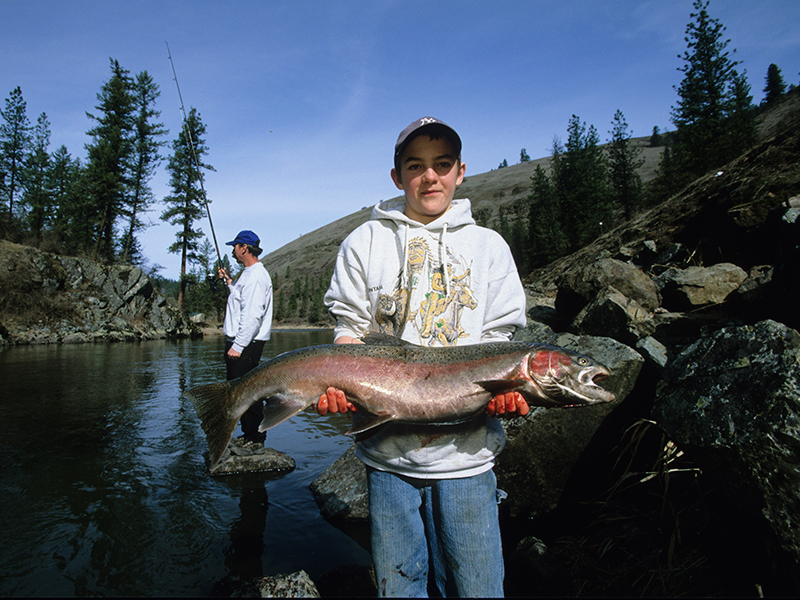 2 of 5
Get Hooked On Steelies

3 of 5
Get Hooked On Steelies 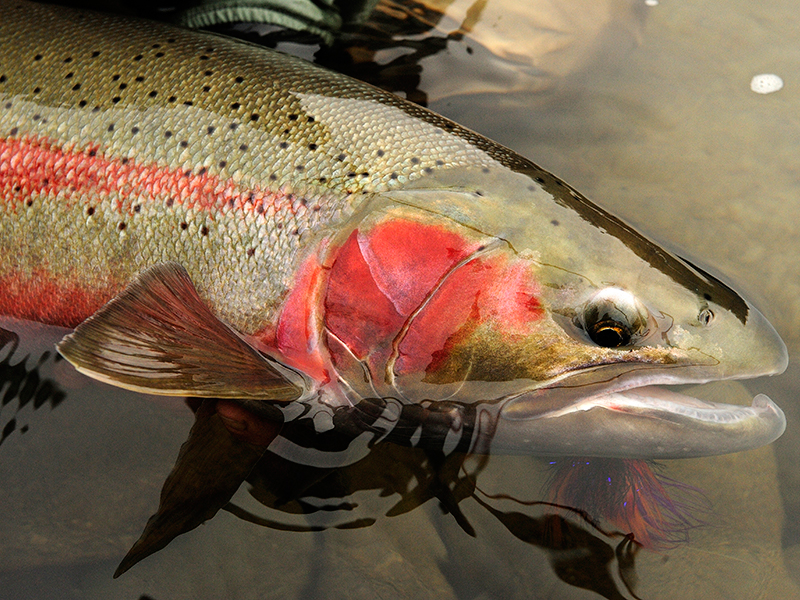 4 of 5
Get Hooked On Steelies 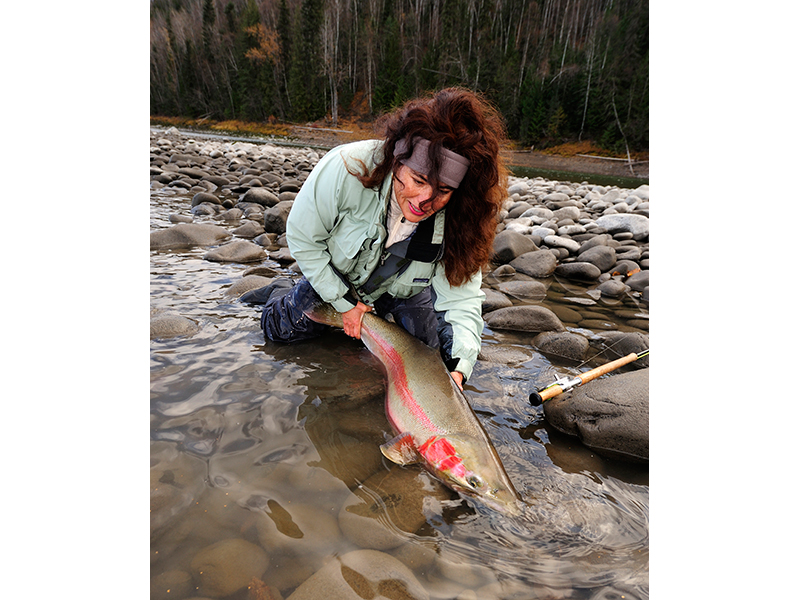 5 of 5
Get Hooked On Steelies 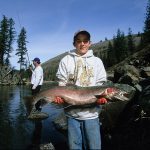 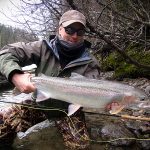 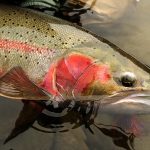 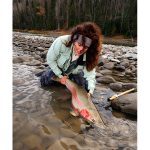 Steelhead anglers on brawling, deep-running Pacific Northwest rivers might tell you they first imagine the fish finning in the current in front of them. Then they try to catch that illusion. Sometimes they even do. Back in the Northeast, it’s the same on New York’s Pulaski River and elsewhere. Each cast brings you closer to hooking up.

Strategies to put your bait, lure or fly in front of steelhead so they eat it follow here—but first a word or two on the fish itself.

“Steelhead” as we dub them, are rainbow trout that move to the sea, grow large and well-muscled before returning to the inland stream where they were born—or in the case of hatchery-raised “wild brood stock,” released. They’re sea-run rainbows if you will.

Anadromous fish, the mystery of their seasonal movements builds angler anticipation and makes this pursuit the somewhat mystical (and obsessive) thing it is. They’re also drawn to big lakes before finning back to what are known as skinny waters.

I traveled from New England to Oregon on a train to hook my first one. It’s rare I don’t think of that fish when in the act of trying to catch others. A Western farmer in our observation car moving through Montana commented on my fishing tackle: “Best trout fishing I ever did was in an irrigation ditch with a pitchfork.”

My effort would involve a great river and more traditional fishing tackle.

For days I’d caught salmon, fish we baked in the oven, covered with capers, white wine and butter inside tin foil, but no steelhead. Autumn heat rivaling that in a camp stove passed. A fine, cool mist and fog greeted me that morning. I hiked upriver.

On the seventh day of trying, just as my drive to catch a big steelhead seemed to fade from hope to desperation, I cast, and then looked distractedly upstream to see a number of deer crossing a shallow spot.

It was then that the Clackamas River steelhead decided to strike. At first I thought it was one of many bottom-bumping hang-ups. I’d lost a number of lures and flies during my cross-country angling adventure that way. It’s a necessary evil—getting the offering down where they can see it, follow and hit the business end of your line. The throbbing, heavy weight rising to the river surface told me otherwise.

A yard-long steelhead will get your attention. I fought it upstream and held my own, though the fish certainly retained a fighting power I’ve rarely encountered in my decades of fishing. And then it made a counter move, a run downstream. I followed my trophy, stepping over slippery rocks, wading into the Clack’s heavy emerald-green current. My reel’s drag protested. Finally, I turned the fish my way and after much effort, it seemed to relax just a little as if tired from the fight. I know I was.

I eased the big fish toward me, struggling against the current, and held the steelhead by the jaw and thick spot above the tail. That wild eye looked once more my way and with an effort to survive, the fish shook and the line snapped with the sound of a ruler hitting a desktop. The swift current took the fish back. There, then gone.

Whether I caught, lost or released that steelhead is up to debate. I’ve caught even larger fish since then, but that first Oregon steelhead is one of my more bittersweet angling memories. I remain grateful for the encounter.

Out West: The Pacific Northwest holds numerous steelhead fisheries. In Oregon these include the Clackamas River, plus fabled others such as the Deschutes and Rogue River systems. Just to the north, Washington offers steelhead angling on the Snohomish River (formed by the confluence of the Skokomish and Snoqualmie fisheries), isolated haunts in the Olympic Peninsula region, and plenty of others. Both states share the Columbia River fishery and respective tributaries. Points north in western British Columbia, Canada, such as the Skeena River drainage, see traditional steelhead runs.

Back East: New York’s Salmon and Oswego rivers offer shore and drift boat steelhead fishing. Lake Ontario tributaries are stocked annually with fingerlings, sustaining this fishery from year to year. Public access is widespread. Great Lakes steelhead fisheries include casting along the many tributaries in this broad general region. Michigan’s Muskegon River is one such traditional location.

General locations in all geographical areas include deeper holding pools below riffle water where numbers of steelhead stack up together as they move upstream. Catch one and stick with the water—if not that day, the next, so long as that window of movement is ongoing. Finding your own special location is deeply satisfying.

Timing: Summer steelhead enter freshwater between May and September. So-called “winter” steelhead move into freshwater locations sometime between October and May.

Both seasons put you in a situation where you might catch the fish of a lifetime. As ever, local angling insights are discussed streamside and at local fly and tackle shops.

Lures: Flashy spoons and spinners trigger steelhead to strike. Cover the expanse of a deep hole, imagining the bottom structure there. Cast, let it drift, then drop. Work upstream to the next hole. Study the currents. Where would a big fish hold? Some use swivels to avoid line twist as the offering moves through the current. My favorite steelhead spinner: a red rooster tail. Whether it’s the color, action or both, it works like nothing else.

Baits: Fish eggs (roe or “spawn”) can be wadded on an octopus-style hook and bottom-bumped for steelhead. Anglers often wrap the offering in pink or blue mesh. If you don’t have fresh salmon eggs, they’re widely available from regional bait shops in screw-cap jars. As with lures, getting the offering down (and just above) the stream-bottom current seam in which steelhead lurk is essential—even if one catches rocks and hangs up.

For bank fishing, rig the common night crawler on a sinker and slider rig to get the bait down and keep it straight and firm. Steelhead anglers also favor crayfish tails and shrimp.

Flies: The Woolly Bugger is universally reliable for trout and bass, as it is for steelhead. Traditional salmon streamers work well, plus egg-sucking leech patterns, and any high-profile fly. Use a floating line when fishing nymphs or “skating” big dry flies, and a sinking option for getting streamers down deep. For bigger steelhead, fly rods should be 8-, 9- or 10-weight. Lines should match your choice.

Ten to 12-foot leaders tapered to 12-pound test are the norm, but variations (depending on your abilities) are manageable. Fly patterns can range from sizes 2 to 8. If you’re into smaller summer steelhead, fly fish as you would for trout that size (5- to 7-weight rods, etc.).

Be sure to check angling laws, lure, bait and fly regulations, including tackle and technique restrictions.

First decide on the river you want to fish and the casting position where you’ll stand—this location will change throughout the day. Base your positioning on water depth and current speed. Your goal is to control the drift of the lure, bait or fly you are casting. The trick is to place it in front of the steelhead so it has enough time to see, move to and strike the offering. You want to put it at the eye level of the fish, in the sight window.

If the river is fast and deep, cast upstream to allow the terminal rig (your lure, etc.) to sink enough to get down to where steelhead hold. You may have to adjust weight with non-toxic sinkers or some other system to do this. If the water is slower and shallower, you may simply cast directly in front of your position (or even below it) to fish the offering correctly.

Cover all the water in front of you repetitively, varying the cast and depth of your lure, bait or fly. Chances are, the deeper you go the better—risking the loss of gear—in a deep, fast river. As mentioned at the start, you’ve got to imagine where the steelhead might be and this comes with experience.

Keep what fish you’ll eat as a rule and within possession limits; gently release the rest.

Unlike salmon, which typically die where they spawn after the run upstream, steelhead often return to the ocean (or large freshwater lake) from which they came. Release ensures the possibility of future runs. Exercise care when doing so, reviving the steelhead in the current until the fish fins off on its own power.

Prepare meals as you would with any trout (or salmon) recipe. Grilling, broiling and baking all work well. 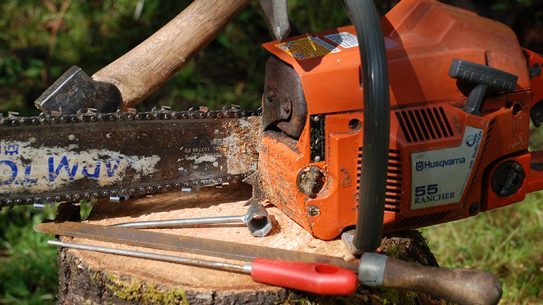 With the right file and sharpening technique you can maintain your cutting edge cord...