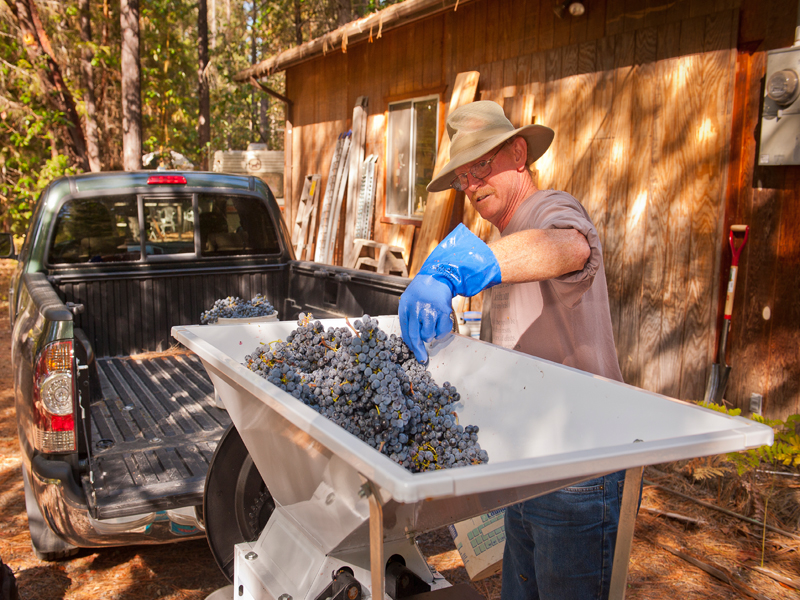 Photo by Thomas Kirchen
Scott unloads the picked fruit and gets ready to put it in the destemmer-crusher.
Comment(s)

Before diving into stomping your own grapes, The New Pioneer wants to give you a good dose of background information on Scott Loomis. Tasty homemade wine doesn’t come overnight. There are many lessons to be learned in Scott’s odyssey from plums, to musical instruments, and finally, blue ribbons!

Scott made his first wine 40 years ago in San Jose from plums that were falling on the ground and making a mess in his yard. “My friend and I scooped up the plums, put them in a plastic garbage can and he stomped them in his sneakers—he did wash them first. We didn’t know anything about winemaking except that you were supposed to add yeast to it to start it fermenting. I don’t think we even used yeast, but the wine turned out OK. It was pretty good.”

That tweaked Scott’s interest and he bought a kit. “In those days that meant using a can of concentrated grape juice and adding water to it. The wine wasn’t great but I started to read more about winemaking.”

Then life got in the way. Scott and his wife Linda had their first son, Jacob, and decided it was time to leave San Jose—“a bad scene then”—and move to southern Oregon. He quit his job at a tech company and they headed north. “I thought we would buy a piece of land and I could start a vineyard and winery. We found a beautiful piece of land but it had one problem—no water.”

Scott took that as a sign it was time to set his grape growing and winemaking dreams aside to raise a family and earn a living. Linda became a teacher and Scott started working with wood, doing cabinetmaking and helping people finish houses. Eventually he went back to school and became a high school teacher—until the sound of a Native American flute was the start of a new career.

“I was interested in Native American culture because of my cultural heritage and got involved with some drummers and singers. When I heard the flutes I fell in love with their sound. One of the musicians said to me, ‘You’re a woodworker, why don’t we make one?’ I bought a book and made my first flute. It sounded good and I decided to start making them full time in 1990.”

Wind’s Song flutes quickly gained a worldwide reputation. One of Scott’s fans was the head of entertainment at Sterling Vineyards in Napa and asked Scott if he wanted to barter a flute for a case of Sterling’s famed Cabernet Sauvignon. “I said ‘yes’ and before I knew it I had traded him for 16 cases of beautiful wine. That tweaked my interest again and I started branching out and buying wine on my own—and lots of it. Four years ago, I said to myself, ‘This is getting expensive, why don’t you make your own?’

“I didn’t want to jump in with both feet at first with real fruit and decided to try another kit.” In the 40 years since he tried his first kit, they had changed a lot—and for the better. “They produce good wine now. They use real juice, not concentrate. Some will even give you a bag of grape skins.”

After making three kit wines, Scott began using grapes from a local vineyard. Wine from his third harvest won two gold medals and a bronze at a local harvest fair. “I entered the competition because I wanted to get the feedback from the judges—they were professionals,” he says. “I was blown away by their comments.”

SCOTT’S TIPS FOR MAKING YOUR OWN

Like many other skills, you learn how to make wine by doing. It is not a complicated process, despite all the mystique and winespeak you hear. Most professional winemakers will tell you, “Less is better. Great wine is made in the vineyard.” But they need to help Mother Nature along, ever so gently, and so do home winemakers. Based on his experience, Scott suggests that beginners do the following.

READ UP: First, he recommends buying one of the home winemaking “bibles” and reading it thoroughly to get familiar with the terminology and procedures involved. Two of his favorites are Home Winemaking Step by Step by Jon Iverson and From Vines to Wines by Jeff Cox. He also suggests reading WineMaker magazine, which gives step-by-step instructions on various aspects of winemaking.

START WITH A KIT: Before you use raw fruit, he advises buying a kit to make the first few batches of wine. “Doing so will give you an understanding of the process, which is pretty much the same, and familiarize you with techniques.”

BASIC GEAR: Next, buy the basics you need to get started: a primary and secondary fermenter, an acid test kit, a pH meter, potassium metabisulfite to preserve the juice, a corker, carboys to hold the wine, a destemmer-crusher if you decide you are serious about making wine, staves (pieces of oak) and/or oak barrels. The books will tell you what you need.

“Take it easy buying equipment,” Scott says. “For fermenters I use food-grade 24-gallon plastic containers. Buying food grade is important. If you don’t, the plastic will affect the taste of the wine. Carboys (5 to 6 gallons) for holding wine during the racking process run from $35 to $40 each. When bottling I re-use bottles that I have thoroughly cleaned.

“When I first started I didn’t have a destemmer-crusher—I used my hands to strip the grapes from the stems and crushed them by hand. Later I found out that was not a bad way to go. I was actually doing whole berry fermentation, which is quite popular now. Doing the stemming and crushing by hand is slow going and I ended up spending $350 for an Italian destemmer-crusher.”

He says that interest in home winemaking has exploded in the last few years, that manufacturers have responded by making a variety of high quality gear for the home winemaker. At some point he hopes to get a stainless steel fermenter and a small oak barrel or two. “But first I have to come up with some way to move them. They are heavy.”

He stresses the importance of having equipment on hand before beginning the winemaking process. “You don’t want to have picked your fruit, be ready to crush it and have to run to the store to buy something. And make sure that your equipment is clean—sterile—before your begin. Dirty equipment will ruin a batch of wine.”

GRAPE SENSE: If using raw fruit, decide on the grape variety you want, then visit the vineyard and taste the grapes to see how far along they are. Winegrapes are ripe when they taste “over the top”—almost too sweet. Scott says that taste buds are the ultimate judge but for help you can take along a refractometer to test the sugar content of the fruit and look at the color of the seeds, which should be brown or turning brown.

When it’s time to pick, take 5-gallon food-grade plastic buckets to hold the grapes. Figure on about 120 pounds of grapes to make 5 gallons of wine.

CRUSHING THE FRUIT: When you get home, destem and crush the fruit, either with a machine or by hand. Crush the fruit into the primary fermenter. Having the right temperature in the area where you ferment is important. What it should be will depend on whether you are crushing white or red grapes. Scott uses red grapes and ferments in his shop using a yeast appropriate for the grape variety.

“I keep the ambient temperature about 80 degrees. The heat of fermentation bumps that up about 10 degrees. I learned about temperature as I went along. Full extraction happens quickly and you can see the color of the juice darken as the skins start breaking down. While fermentation is going on, you need to punch the cap (the grape pulp that rises to the top of the juice) down twice a day. If you don’t, the fruit will go bad. I use a potato masher on a long pole.”

RACKING: After the juice has fermented, Scott moves it into carboys and lets it settle. At this point he adds malolactic bacteria—for red wines. He says to consult a good winemaking book to gauge how much to add. “You want the sediment to go to the bottom of the carboy. When it does, siphon off the juice and move it into another carboy. That’s when I add oak chips or oak staves (pieces). I rack two to three times.”

After racking, he ages the wine in carboys, tasting and testing it every few months. Scott cautions beginners, “Don’t be concerned about manipulating the juice—adding sugar or acid, for example. Let Nature do its thing. Then I usually let the wine ‘bulk age’ in the carboys until just before the next year’s harvest, almost a year.”

BOTTLING: Next comes bottling the wine. And after that, says Scott, “Rest the wine, give it more time, then uncork a bottle and enjoy it. If I could give the home winemaker two pieces of advice, I would say: Be patient…and taste, taste, taste through the whole process. Wine is a living thing. It changes in the bottle. But that’s what makes it exciting.” 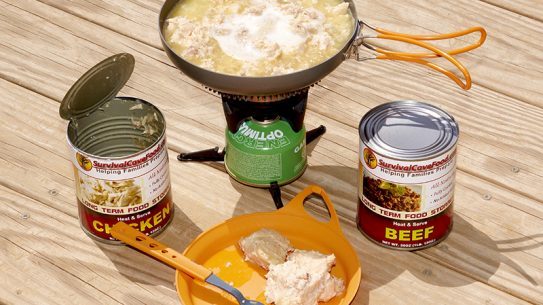 When natural disaster strikes, or the zombie apocalypse begins, let our MRE-foodie critic be... 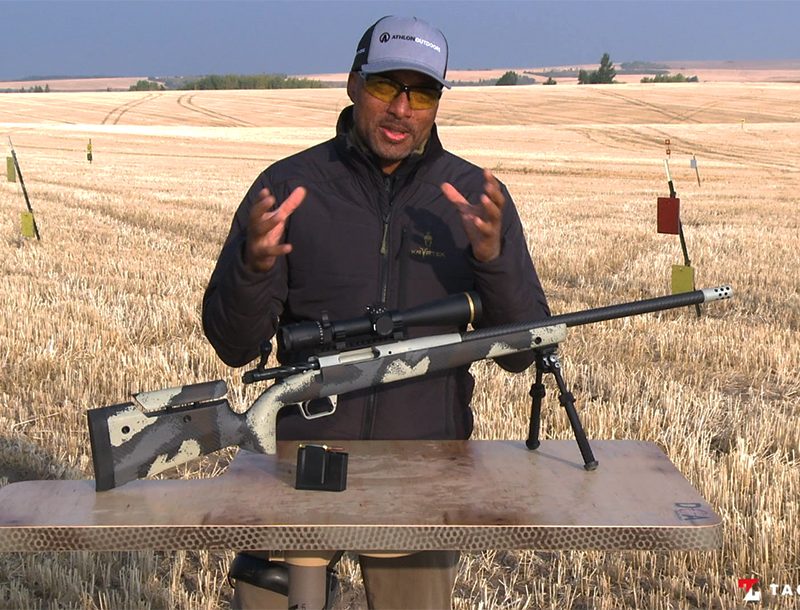 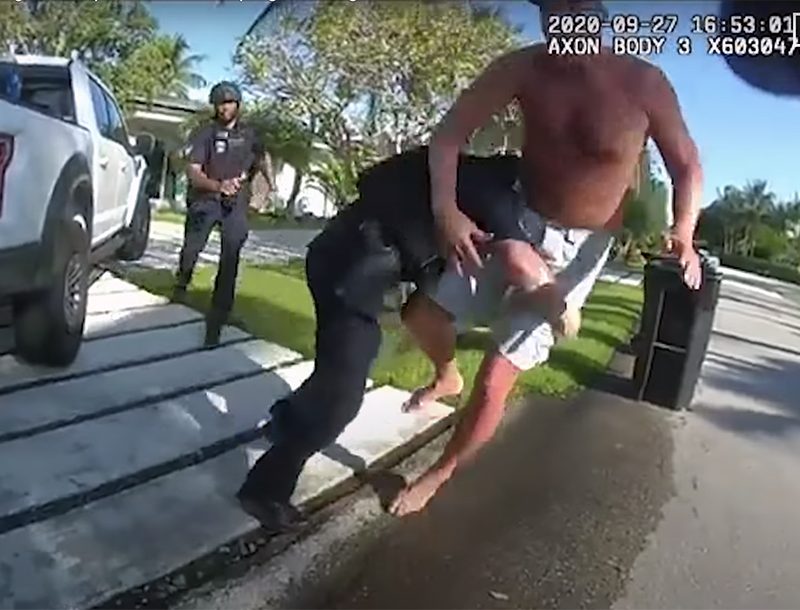