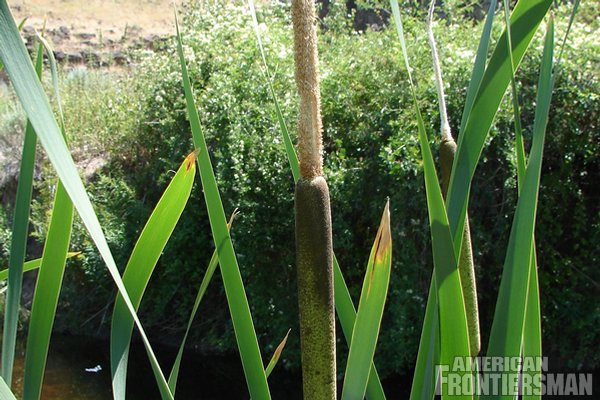 1 of 3
tyla_010_pvp_phatchfinal
A desert oasis can provide food even when water has dried, if it has cattails. Odds are good it will. In bloom, these provide easy pollen; unripe catkins are good like corn on the cob; roots are good any time. 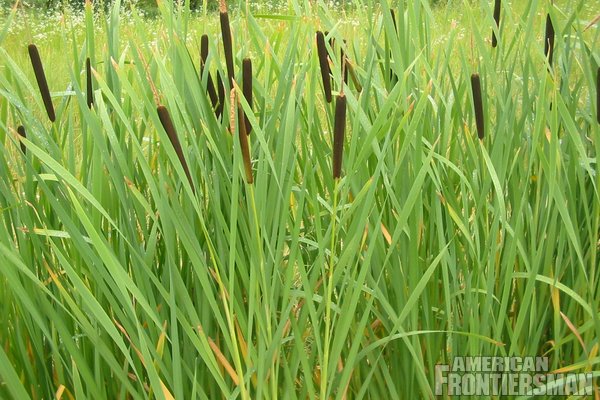 2 of 3
Typha_latifolia_02_bgiu_phatchfinal
Found all over the Northern Hemisphere, Typha latifolia provided food and shelter to prehistoric Europeans, Native Americans, and Frontiersmen. 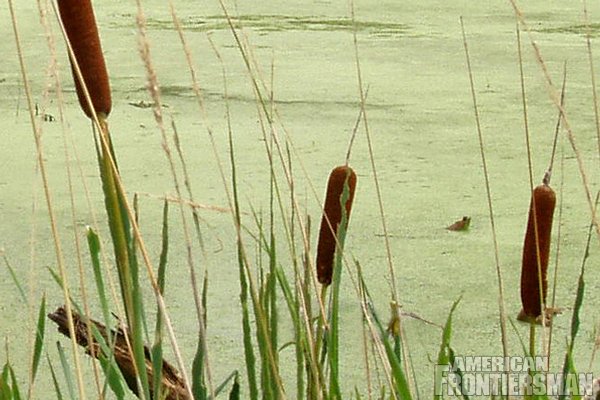 3 of 3
OLYMPUS DIGITAL CAMERA
Ponds and wetlands are typical, but not exclusive, venue for cattails. When in standing water, the nutritious rhizomes are easily harvested by hand. 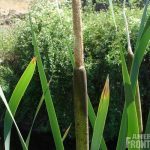 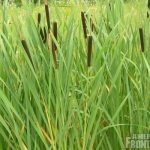 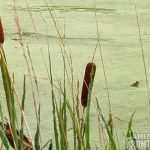 If I had to choose between surviving bare-handed near a pond with catfish or one with cattails, I’d probably opt for the cattails, and not just because they are easier to catch.

Sure, catfish are tasty and nutritious, but they’re only one kind of food: Cattails provide many kinds of meals—also tasty and nutritious—plus you can lay up a supply for winter or for travel. They provide medicine, clothing and shelter to boot. One of the greatest points in their favor is that you may find them find anywhere in moist soil or standing water, yup, even around your favorite catfish pond.

Some dozen species grow just about worldwide in the Northern Hemisphere and Australia, the most common and largest being Typha latifolia. All perennials, they spread out in favorable habitat, creating an incredibly dense food resource because virtually every part of the plant is edible. And not just “edible” as in goat fodder that only Euell Gibbons could love, but tasty and very nutritious fare from the buckwheat-like, high-protein pollen at the top, the vitamin-rich shoots, stalks and young flowers in the middle, to the starchy rhizome network in the soil. Some part is edible at every time of year, and it’s always relatively easy to harvest. There is probably no other pollen on the planet as easy to harvest by the pound as cattail, and there are so many tasty things to do with this fine, flour-like staple.

“Ewww, eating grass” you say? How about corn, rice and wheat? They’re all bugs and grass… Other tasty grasses (family Gramineae) include oats, barley, rye—and cattails. Considered objectively, cattails would be the king of them all as a food stock, and not just because it’s one of the few grasses with a worthwhile root (actually a rhizome, an underground lateral stalk). Native Americans, for example, didn’t consider cattails as a food of last resort. It was a go-to culinary staple for many dishes, including desserts. It grew so well naturally they didn’t have to cultivate it any more than they had to farm the native fish.

Preserved Typha starch found on grinding stones in Paleolithic digs across Europe indicate cattails were a common staple tens of thousands of years ago. Cattails thrive all over Europe. I’ve never seen really big forsaken stands there, because the folks eat ’em up. The early-season shoots (corms) and tender young stalks are peeled and boiled as “Cossack Asparagus.” They’re excellent with a hollandaise sauce at home; in the woods, you can just graze. Depending on the cleanliness of the water, you may want to only eat raw above the waterline.

The best beds of cattails I’ve seen, though, have been in North America, probably because nobody much since the Native Americans and frontiersmen have molested them. They could be an immense resource if we’d quit draining our wetlands. How immense? There is actually a Cattail Research Center at Syracuse University, which cited some stunning numbers: they could harvest some 140 tons of rhizomes per acre per year (about 10 times a decent potato crop), which would yield 32 tons of dry cattail flour. Compare those numbers with spuds or GMO corn!

Keeping in mind that you can dry and keep cattail pollen and starch to use all year, let’s follow the frontier calendar-based recipe review of cattail cooking. It’s honestly haute cuisine when we do it right in a kitchen, and tolerable victuals in the wild because it starts good, and by the time you have messed with it under aboriginal conditions, odds are that you’ll have worked up an appetite. Cattail products may be too labor intensive for the supermarket, but what’s that got to do with a frontiersman, yesterday or today?

For a root starch, cattail contains a fair amount of gluten, which is good news if you want to make a flatbread or tortillas, or need it to hang together because you don’t have utensils. In the woods, as kids we just washed and peeled the roots, cut them up, and pounded them with water in a can with a blunt stick until the starch washed out, then best we could strained out the fiber, let the good stuff settle and poured off the water. You can also split the root and scrape out the starchy part, which is still fibrous, and wash the starch out of that. Depending on your setting, you can wash, cut up and dry the roots, then pound them as fine as you can, put them in a cloth and boil the starch out.

Our best “recipe” was to boil it down until it got about like porridge, then add pollen if in season, until it got thick about like biscuit dough. We’d put a wad of that on a forked stick and roast it in the fire like a marshmallow or stick biscuit; or cook any consistency from batter on up on a hot rock. Once, we mashed in a lot of blackberries, and that was pudding you wouldn’t have to apologize for, anywhere. In even a frontier kitchen, of course, you will have all kinds of options for preparing and cooking. The starch can be quite sweet, but different varieties of cattail, in different growing conditions, will vary in flavor and quantity. Best starch collecting is in late fall and winter, when it’s stored in the rhizome.

Some people think it tastes like mashed potatoes if seasoned the same; some think it tastes like poi. Peeled and the inner core thinly sliced, tender shoots can be fried and reportedly taste like new potatoes. As with most bland-flavored starchy foods, seasoning of choice can really help.

Last year’s seeds are also edible once you burn the fluff, but they’re so small I never have seriously bothered. East Coast Indian cooks mashed and boiled the roots, then boiled the juice down to a thick syrup.

1 of 3
tyla_010_pvp_phatchfinal
A desert oasis can provide food even when water has dried, if it has cattails. Odds are good it will. In bloom, these provide easy pollen; unripe catkins are good like corn on the cob; roots are good any time.

2 of 3
Typha_latifolia_02_bgiu_phatchfinal
Found all over the Northern Hemisphere, Typha latifolia provided food and shelter to prehistoric Europeans, Native Americans, and Frontiersmen.

3 of 3
OLYMPUS DIGITAL CAMERA
Ponds and wetlands are typical, but not exclusive, venue for cattails. When in standing water, the nutritious rhizomes are easily harvested by hand.

With Spring, you can pretend you are the legendary Panda who walks into a bar, eats, shoots, and leaves. [What, you never heard that one?] The pointed little corms that sprout up from the rhizome can be broken off and if the water is clean, eaten on the spot. Some folks think they taste like cucumbers or maybe zucchini. Once these corms grow into an upward shoot, that shoot can be peeled and eaten raw. The easiest way to harvest shoots once they break water, is to grab the stalk like it was a grass stem you wanted to chew on, and pull straight up. The crisp white lower part is what you want, just like on a grass stem. On the upper portion of a shoot, peel away the outer layers until you get to the crisp and tender inner parts, then just pretend it is asparagus.

Boil or sauté it, can it, pickle it just like you would asparagus. Generations of Cossacks can’t be wrong. Raw, some folks think this part tastes like mild celery.

Usually around the end of June, you can get tender inner stalks, immature “corncob” flowers, and pollen all at the same time from different plants. Peel the leaves away from the developing flower spike, boil and eat like very small corn on the cob. It may be the power of suggestion, but they tend to taste a little like corn. The male shoots at the very top, which will produce pollen, can also be boiled and the soft parts eaten early on, before the larger female parts really have started to form. In short, any tender part can be eaten raw or cooked, any time you can get it. Think salads, stir-fry, casseroles.

You can peel and eat them well into the summer: pick the largest shoots that haven’t begun to flower, pull straight up. Peel and toss all outside layers that are not tender. Ratio of food to fiber varies with the size of the shoot: for efficiency, go for the biggest ones that are still tender.

By the end of June in most areas, seed heads will mature and pollen will come. It’s the most worthwhile pollen I’ve found that doesn’t have to be harvested by bees. Just bend the top over into a paper bag, hold the bag closed and shake. In a good stand if the wind has not robbed it, you can get pounds per hour. It’s yellow, and very fine like flour, I’d guess about 100 mesh or finer, so doesn’t have to be milled before use to upgrade or extend flour. It’s quick and easy protein for a knight errant or other woods traveler, with a nutty/corny/buckwheat flavor to it. Like the starch, it’s a good component or extender for all kinds of recipes from mush to meatloaf, from soup to cinnamon rolls, from casseroles to corn-meal pudding. It gives a yellow cast if mixed with wheat flour, for attractive cookies and muffins. Both pollen and starch work well with other ingredients, and although the starch may be sweet it’s available and extractible year ’round, any time you need carbs.

Once you and your consort start using it around your cabin, you’ll find yourself substituting this pollen for flour in all kinds of breads, biscuits, cakes and cookies—just like our frontier forebears.

And another thing: when the rib sends you out for venison or a mess of fish, even if you get skunked, you never have to return without something for the pot if you have cattails! 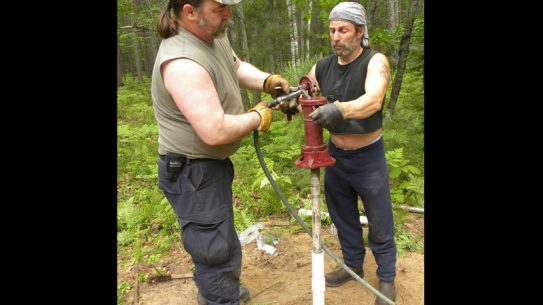 With elbow grease and this simple DIY project you'll have a reliable water supply...