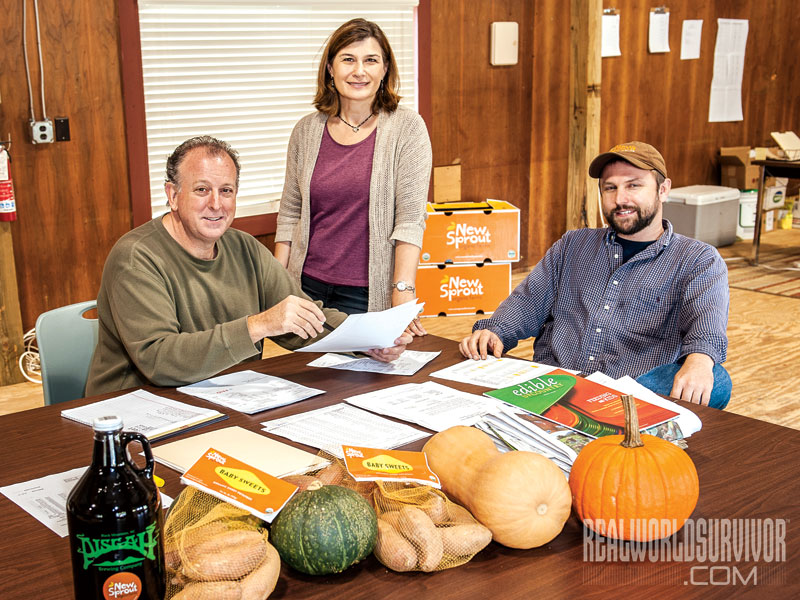 1 of 5
Photo by Thomas Kirchen
New Opportunities
Alan and Jill Rose go over some accounts with Michael. They want to put their produce into more value-added products, such as the Pisgah Pumpkin Ale and small packages of sweet potatoes on the desk. 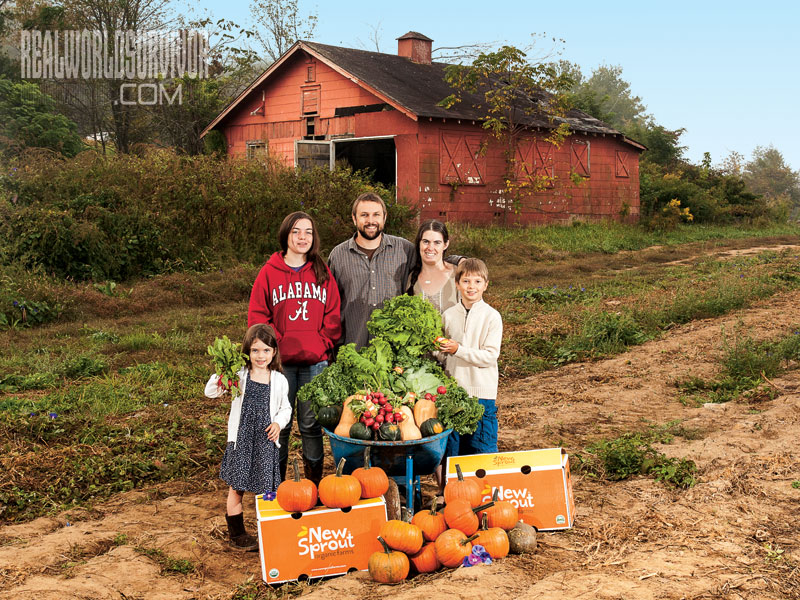 2 of 5
Photo by Thomas Kirchen
New Sprout Family
Michael, Michelle and their three children with produce they’ve gathered in this field, one of several that New Sprout leases in the Asheville area. 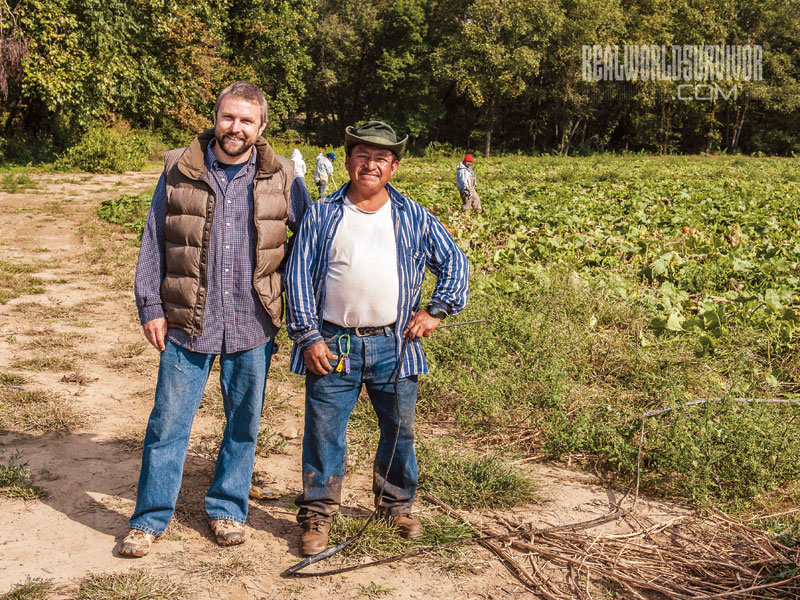 3 of 5
Photo by Thomas Kirchen
Full-Time Employees
Michael and crew leader, Juan Tecam. One of Michael’s goals at New Sprout has been to have enough work to keep his crew on full-time, one of the reasons the company is looking into more value-added products. 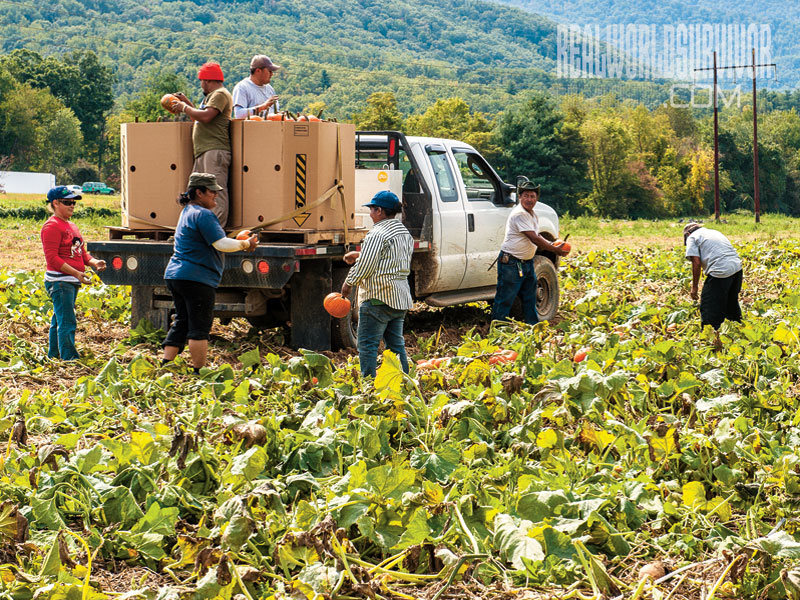 4 of 5
Photo by Thomas Kirchen
Harvesting Pumpkins
Harvesting pumpkins assembly-line style is fun at New Sprout. These beauties are going to Pisgah Brewery, which is next to the New Sprout warehouse. 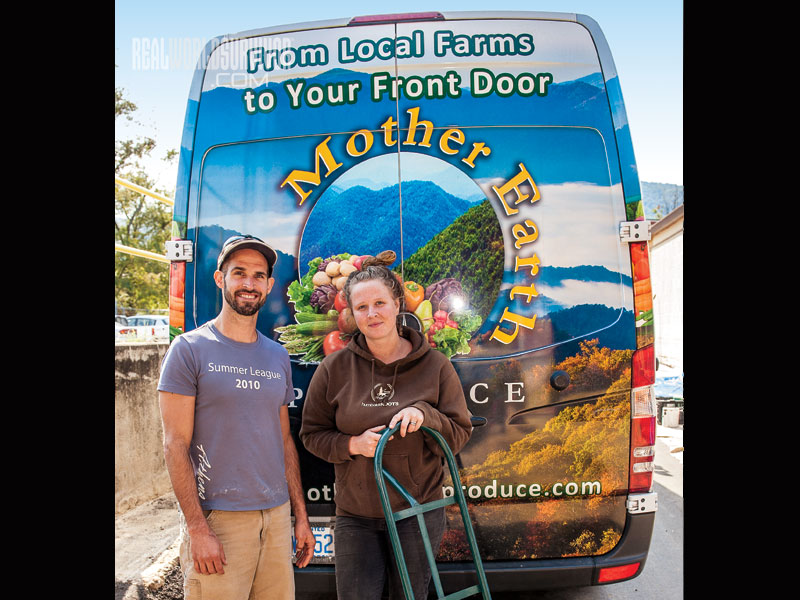 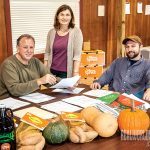 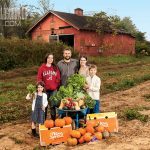 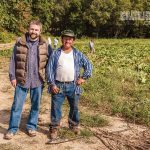 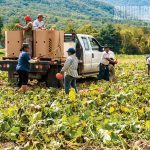 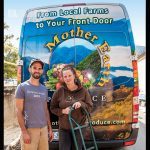 Many farmers think all you have to do is grow great produce. They don’t see the importance of marketing or don’t know how to build a successful brand,” Michael Porterfield said as he steered his pickup onto a dirt road alongside a New Sprout field of kale, located in the outskirts of Asheville, North Carolina.

Six years after he planted his first small garden, his company, New Sprout Organic Farms, is one of the most innovative food producers in the southeastern corner of the United States, thanks to his farming skills and entrepreneurial savvy.

“I wanted to go beyond selling to farmers’ markets,” said the 37-year old as he bent down to check an irrigation valve. “One of the reasons New Sprout is successful is that we not only know how to grow and harvest produce but have learned post-harvest handling, that you have to pick and cool produce fast and refrigerate it quickly. The consumer wants perfect looking produce, and the store wants it to last as long as possible on the shelf.”

Those don’t sound like the words of an idealistic fine arts major who dropped out of college to see some of the world but that’s what Michael did. “My parents told me I was a throwback to the ’60s,” he says. “I traveled around the country and to South America, followed the Grateful Dead, tried a lot of different things and met many great people along the way.”

His nomadic life ended 14 years ago when he married his wife, Michelle, a New Englander. They settled in Asheville after falling in love with the city and the Smoky Mountains on a trip to North Carolina.

“I spent many summers in the Ozarks at my grandmother’s house and just loved the mountains. My father was in the military so we moved around a lot growing up. The mountains were the one consistent thing that I always came back to. I lived in New England a while but never felt I was really home.”

In Asheville he had no trouble finding work and hadn’t thought about starting his own business. Then the farming bug bit him and he realized that simply growing good food was not enough, that he had to find a profitable way to market and sell it.

“I think all my traveling around and meeting different people helped me relate to people and develop successful business relationships. I like being with people, think that makes you naturally a decent sales person. I am very much an attention-to-detail kind of guy and that got me interested in how growing produce interlocked with the selling and marketing of it. People said to me, ‘You are really good at this,’ and I started to think that maybe I was.”

Michael didn’t know it at the time but a farm tour he took set in motion the start of New Sprout. There he met Alan and Jill Rose, a couple with extensive business experience who were interested in organic farming and wanted out of Atlanta.

“Two years later Alan was at a food conference where I was speaking. He looked me up and said, ‘I don’t know if you remember me—I am not a farmer but want to get involved in something to do with organic farming if I can find the right partner. Would you be interested in going into business with my wife, Jill, and me?’”

“The timing was perfect. I was trying to figure out the next step. We talked, sat down, scribbled and made some doodles on a napkin. That was the beginning of New Sprout,” said Michael.

Before long they hired a farm manager, Rich Leavy from California, who has lifted a load of work off Michael’s shoulders. “He’s spectacular in every way, and frees me up from being on a tractor 12 hours a day so I have more time to  concentrate on marketing and selling.”

Today the New Sprout opeation has 88 leased acres and 50 under cultivation. From the distribution center outside of Asheville, New Sprout trucks deliver the company’s produce and that of other small organic growers to the Ingles food chain, Whole Foods, Earth Fair and some distributors, traveling to Charlotte, Atlanta, Chattanooga and Knoxville.

“For us, one sale to Whole Foods is more profitable than selling at several farmer’s markets each week. We are providing quality produce to people who will never go to a farmers’ market,” explained Michael.

The company now has seven full-time employees, 25 part-time. Most of the warehouse is given over to washing, grading and packing produce. Michael, Jill and Alan work at cluttered desks, wearing jeans and t-shirts. The trio do a lot of brainstorming and are looking into using their produce in more value-added products, like the Pisgah Pumpkin Ale made in the  brewery next door to the  warehouse. But Michael still spends hours  in his pickup, checking on crops and talking to retailers.

New Sprout will soon be sprouting a new venture and Michael is enthusiastic. “We are now getting into organic seed and fertilizer sales because we buy for ourselves in volume. We can supply growers in the Southeast at a lower cost to them than they can buy elsewhere and still make money. We fell into this. It will be lucrative and allow us to keep staff on year round. It’s a win-win situation.” 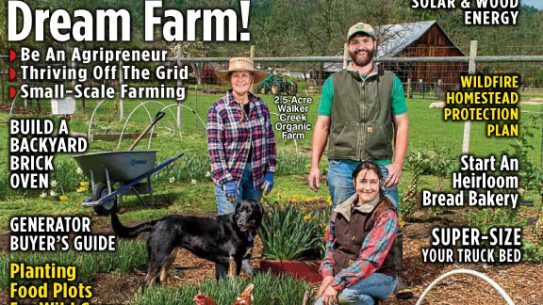