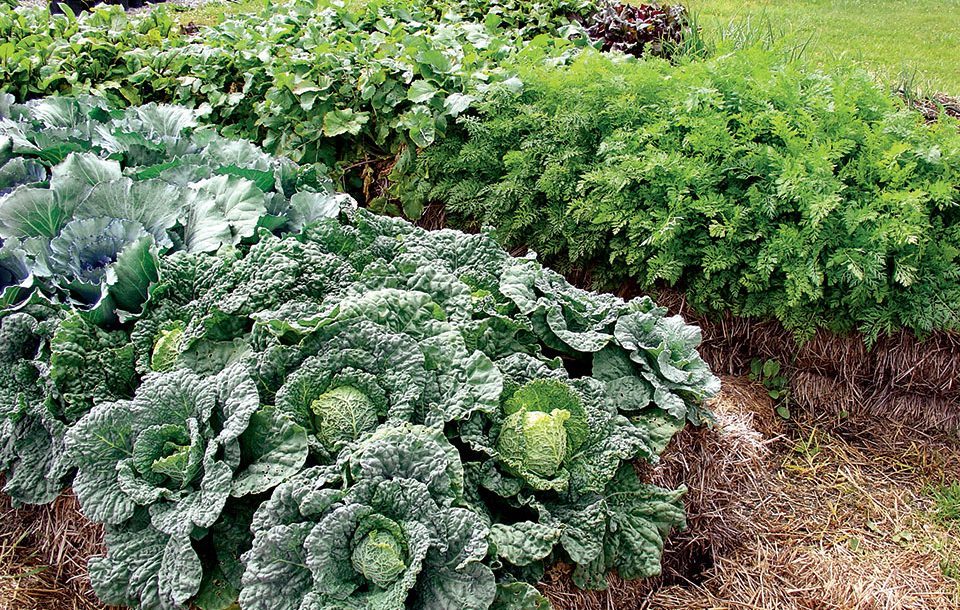 There’s nothing like tilling up a swath of black earth and getting your hands down in the rich soil to plant tomatoes, beans and cucumbers. Backyard gardeners everywhere follow this time-honored ritual, then marvel at Mother Nature as vigorous plants emerge from the ground and provide a bounty of fresh vegetables for the table, freezer and canner.

This traditional way of gardening worked for your grandmother, and it’s served you well over the years, too. But that doesn’t mean it’s the only—or always the best—way to fill your bushel baskets with goodies. What if your property has clay-hardened or rocky soil? What if your usual garden plot is laced with fungus that wilts your tomato plants? Or what if Father Time is catching up with you, making it difficult to crouch down to do planting, weeding or harvesting?

Then it may be time to consider straw bale gardening. Tightly strung bales of oat, wheat or barley straw—used for many purposes out on the farm—can be a great raised-bed planting medium. It offers a sterile, weed-free environment transformed with fertilizer into a nitrogen-rich host for any crop that retains moisture without drowning plants. And as the soaring population of aging baby-boomer gardeners can appreciate, it brings the planting bed up off the ground a foot or two.

In Minnesota, horticulturist Joel Karsten turned to straw bale gardening to overcome a number of these gardening challenges, and in the process he’s penned a best-selling book on the topic, Straw Bale Gardening. The book and his website, strawbalegardens.com, have captured the imagination of gardeners the world over. It all started when Karsten remembered an incident from his childhood, on a farm in southwest Minnesota.

During his first attempt at stacking straw bales on a wagon, Karsten dropped a couple of bales, which broke open and sat against the barn for a year. In the spring, a giant thistle weed sprouted and grew to Jack-and-the-Beanstalk proportions, prompting him to wonder how it all happened. 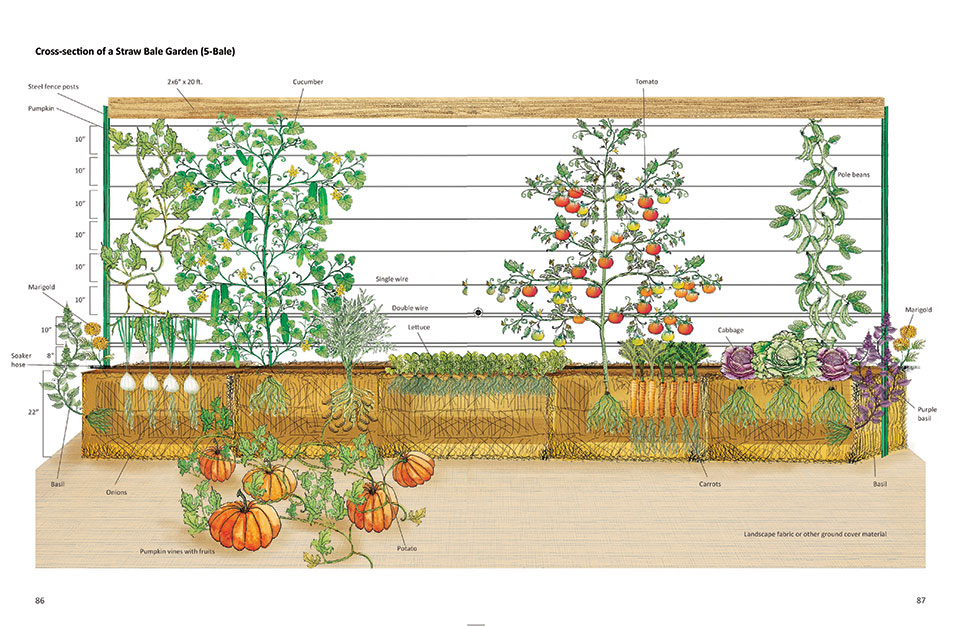 A few decades later, Karsten found that his suburban yard consisted of a lawn covering piles of construction debris and little topsoil. Recalling how the thistle thrived in the decomposing straw bale, he returned to the fam- ily farm and experimented, planting a variety of crops in the squares. After perfecting a recipe for conditioning the bales with fertilizer, Karsten was astonished with the results. “We have 20 bales in the backyard, and my wife and I grow enough vegetables for us and all of our neighbors,” he said. Karsten built a ledge alongside the mailboxes lined up on his cul-de- sac, and he takes boxes of produce out there every night during the summer. “The neighbors come home, get their mail and pick vegetables out of the box.”

Straw bales work well as a growing medium for any vegetable or flower that already grows in the climate where the gardeners live, Karsten said. For people occupying confined urban spaces or areas with poor soil, the bales can be brought in to create an instant, highly effective planting bed, even when placed on a concrete patio. In Karsten’s cool zone 4-to- 5 location, straw bales extend the growing season by about a month over planting in the ground. When other gardeners are planting tomatoes around Memorial Day, Karsten has had his plants in the bales— warmed through decomposition and tented with clear plastic—since April 15. As a result, he gets ripened beau- ties early and doesn’t leave a lot of green fruit on the vine by fall’s first frost. “You plant tomatoes in a bale that’s 90 degrees, and they go nuts. The roots grow like crazy inside, and you get really good early-season root production,” he said, and added that gardeners in Alaska report growing prolific vegetables like never before during their brief summer by using the straw bale method. And in an odd twist, Karsten said he’s able to grow the decidedly southern crop of peanuts at home by using the bales.

If you think straw bales won’t provide any advantages to gardeners in the South, think again. Gardens in that region are plagued by soil-borne diseases, and the sterile environment in straw bales eliminates that concern, Karsten explained. To further limit disease problems, Karsten recommends using only sterile potting soil mix when soil is needed with the bales. Potting mix is sometimes needed to fill in around plant roots after a hole is cut into the top of the bale. When planting seeds, Karsten suggests topping the bales with a few inches of potting mix, then planting seeds just under the bale surface at the same spacing recommended on the package.

Another advantage of straw bales is that they reduce the time gardeners spend pulling weeds. That, in addition to elevating the planting bed, has been a godsend to Kansas market gardener Sandy Golay. She and her husband, Bob, are the owners of Golay Gardens, and she became a devotee of straw bale gardening after visiting Karsten’s website several years ago. She incorporates the method into her 1.5-acre garden plot every year. “I thought it would be too good to be true, but decided to try it,” Golay said about picking up her first load of 90 straw bales.

Golay turned to bales during a wet spring, when the couple couldn’t get enough of their land into production on time and were afraid they wouldn’t meet customer demand. Using a pickup truck and small trailer, they hauled about 40 bales at a time from a farmer 10 miles away, laid them out side by side and got to work. Anything they’ve planted in the bales has done well, and they’ve been getting rave reviews, especially for their small melons, compact cabbage and sweet potatoes. “Some things just grow really well in [the bales],” she explained.

“We’ve never been able to grow turnips before, but they turned out fine as do beets and sweet onions.”

And Golay loves harvesting potatoes in the clean bales. “They’re the most amazing crop in the straw bales. I just kicked the bales over, and here are all these beautiful clean potatoes. All I had to do was pick them up, put them in crates and haul them to the market,” she said. “I was a happy camper not having to dig them up.”

Once the bales are hauled, placed and fertilized, everything about the gardening experience is easier than it is with the couple’s large traditional garden beds. She said they avoid some soil-borne diseases and cut weeding down to almost nothing, and she likes the break from stooping so much. “Digging sweet potatoes is really hard on an old lady,” she joked.

Golay is happy she took a chance using straw bales, with a little encouragement from Karsten. “I’m known for pushing the envelope,” she said. “You’re never going to find out if something works unless you try it.” 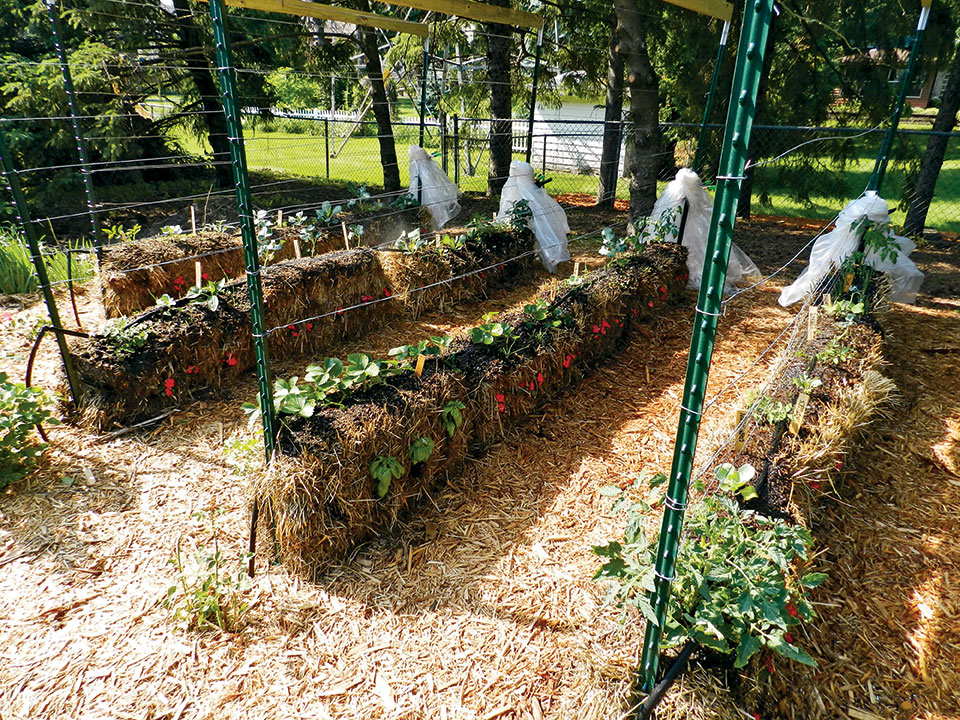 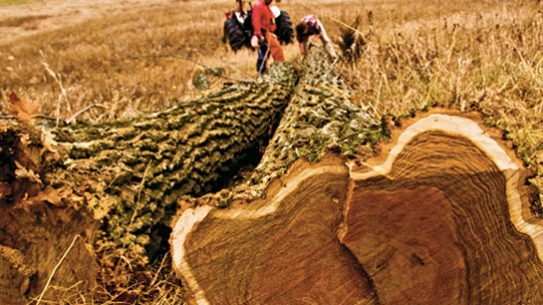 Get Full Value Out Of Your Timber Harvest

You can get taken by large-scale foresters or can keep it eco-smart and fruitful...