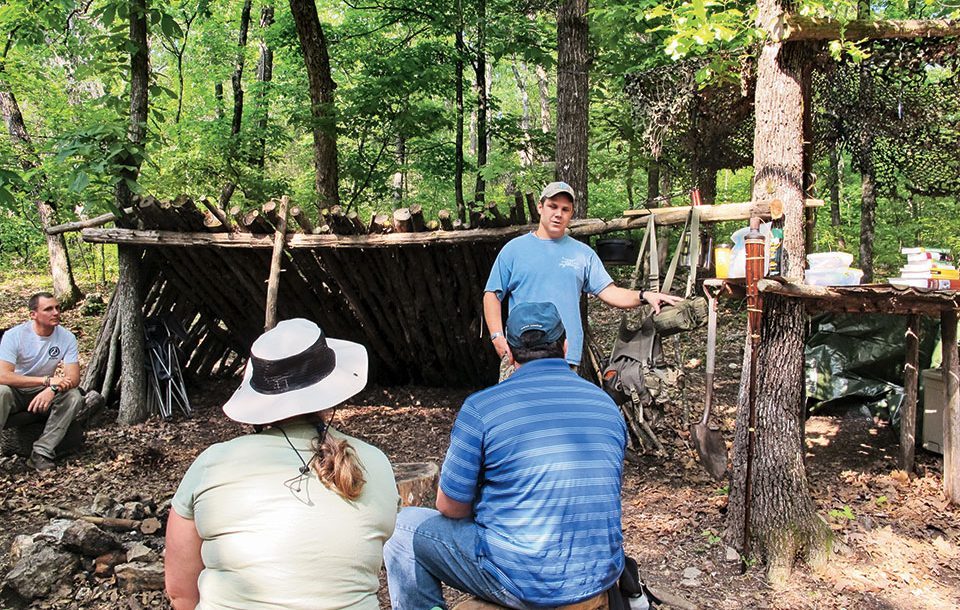 In the wild Ozarks of Arkansas, nestled near the border of Missouri and Oklahoma, an outdoors skills school is carving a name for itself. Ozark Mountain Preparedness (OMP) offers classes taught by head instructor Jerry Ward, a seasoned outdoorsman and trapper, that blend primitive techniques with modern skills, including urban survival, primitive weapons, fire craft, and minimalist and advanced survival. I had the chance to participate in a wild edibles class offered by OMP, chomping down on nature’s best while learning what you can find in your own front yard.

Head To The Hills

A relatively young school, OMP put down its roots in January 2011. However, Jerry has been working in outdoor education for more than 20 years, instructing survival classes for over 10 years. More than 100 classes have taken place on OMP grounds. Shelter skeletons, flint shards and remnants of past classes are intertwined throughout the well-kept outdoor classroom. A large fire pit, complete with a tripod and rustic-style log benches, sets a pioneering backcountry mood.

In the upper camp, a more permanent roof structure was built for a blacksmithing area that will be featured in future classes. Animal furs line the site in various stages of preparation from recent runs on the traplines. The most interesting feature is a trophy tree with a band of skulls hung all around it, the Abenaki menu tree. The skulls, in various stages of decay, include those from coyotes, bobcats, beavers, squirrels, deer, foxes, even turtle shells. Jerry explained that this type of decoration was used by the Abenaki culture, set up by scouts in an area to alert the nomadic tribe about the types of food to be found in a given spot. Also, a gourd would be either face up for good water, or face down for bad water. The tree helps to serve as a bridge for the students, connecting them with the past.

OMP consists of several different teaching areas, ranging from a private property of 12 acres, to a 350-acre plot, all the way to a state forest, but for this class we stayed on the main property. The students can choose to stay in a tent or sleep in one of the primitive shelters that OMP has constructed. During the weekend-long basic and advanced survival classes, students build their own shelter and are urged to sleep in them, but doing so is optional. Jerry elaborated, “The emphasis is on learning and retaining the information, not being miserable from a hard night in a debris hut.”

For the more hardcore student, there is a minimalist course that involves a tiny shoulder bag of equip- ment for a four-day stint. The minimal- ist course is designed to put students in a situation where they are out of their comfort zone. Only a small amount of food is taken, and much of the course involves trying to obtain food, using a combination of wild ed- ibles, trapping and fishing, along with shelter construction. It is a very demanding course, physically and mentally, and is just one of over 20 courses that OMP offers.

Skill Reclamation
Some may argue that many survival skills are useless in the outdoorsman’s repertoire. They include trapping, start- ing fires with limited resources and shelter building. What people don’t re- alize is that the skills have hidden les- sons in them. The trapper, for instance, has to have a working knowledge of the ecosystem, the flora, the fauna and how it all comes together to even be- gin to think about trapping. With this in mind, OMP teaches the courses in a pragmatic way so that they are ap- plicable to more common problems. Everything from trapping problem an- imals to keeping pests out of the gar- den is covered during that particular course. “These are skills that we lost in just two short generations,” Jerry said, “things that our great grandpar- ents did every day as a way of life to be self-sufficient. Do you know, currently, they are even making cars without spare tires? That is how conditioned we are to depending on AAA, cell phones or even supermarkets to provide for everything we need.”

The classes top out at six people. That may seem small to some, but this is important, Jerry feels, to keep the instructor/student ratio low to make sure that people get the attention they need and deserve. Too many survival schools try to pack in as many people as possible, and the curriculum suffers because of it.
OMP does have other instructors to aid with larger classes, such as those for the law enforcement agencies it has trained. “Those situations are easier because everyone knows each other,” Jerry remarked. “But in the ci- vilian classes, if just one person is a little shy, then he won’t get the skills that he paid for.” In classes like the one on fire craft, the group number is essential so that students can learn the nuances of each method of fire-making. Flint and steel is by far the easiest, as the ground is littered with flint.

Feasting The Wild Way
The wild edibles class, as with many OMP classes, brings practicality into the skill set. Jerry explained that these skills were for everyday life, not just for being lost in the woods. The ben- efits of the class included snacking on the trail while walking, keeping the mouth wet, and obtaining nutrients not found in everyday food. With a brief introduction on how it applies to people today, the lead instructor explained how to test food to see if it is edible and ways to prepare food. Then we started on a hike.

To emphasize the practical, we started out in a normal front-yard setting, sampling different material from time to time, including the dan- delion and yellow sorrel. We learned that a common tree in the Southeast, the redbud, is even edible during the springtime, when the new growth is soft and supple. We then embarked on a hike up a mountain trail, with the instructor illustrating the different varieties of common edibles found throughout the region and the differ- ences between these and poisonous counterparts. During the walk, the forest changed, and we were told how the ecology shifted at this point up the mountain and how animals and meadow-dwelling plants utilize this shift in habitat. By the end of the first day, we had an enormous wild edible salad that was absolutely delicious and distinct in flavor.

Fire By Flint And Steel
It was dinnertime, and we needed a campfire. Jerry gave an impromptu lesson on fire-starting using flint and steel. The students learned about the properties of the flint rocks on the property, and Jerry explained how to use char cloth (a cotton cloth that has been charred) to catch a spark from a high-carbon steel striker and the flint. Working from toothpick-sized sticks and up, utilizing cedar bark as tinder, a healthy fire was made in seconds. When the fire lit, water was boiled, and several of the plants—their roots, leaves and other parts—were steeped into refreshing teas.

After watching the instructor in action, and seeing the satisfaction on student’s faces, it’s safe to say that OMP’s classes are informative and well organized. At many such schools, instructors teach “magic shows” to showcase their skills. That’s not the case with OMP and Jerry Ward.
To learn more about the school call 870-350-6995 or ozarkmountainpreparedness.com. 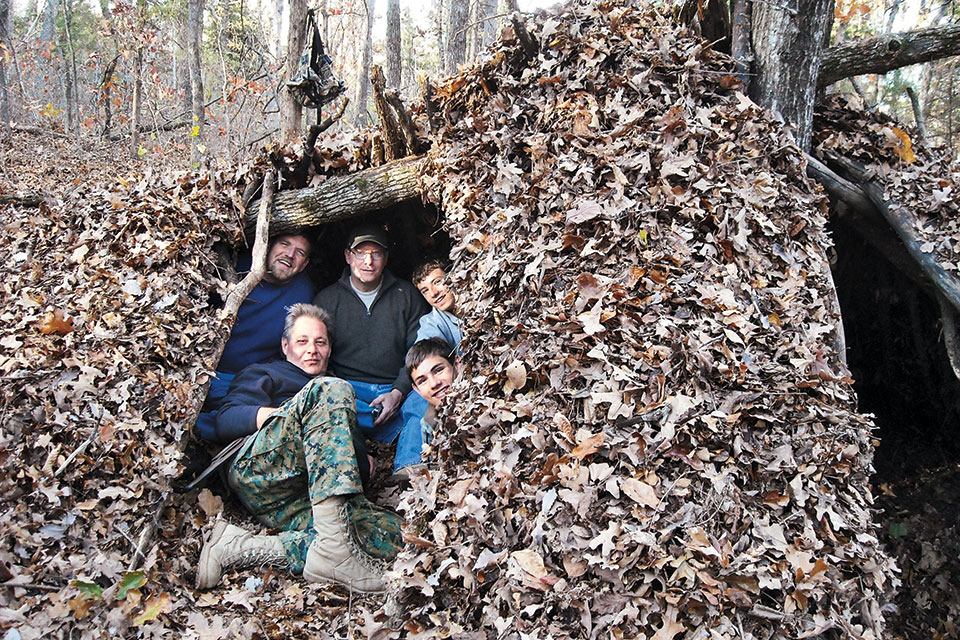 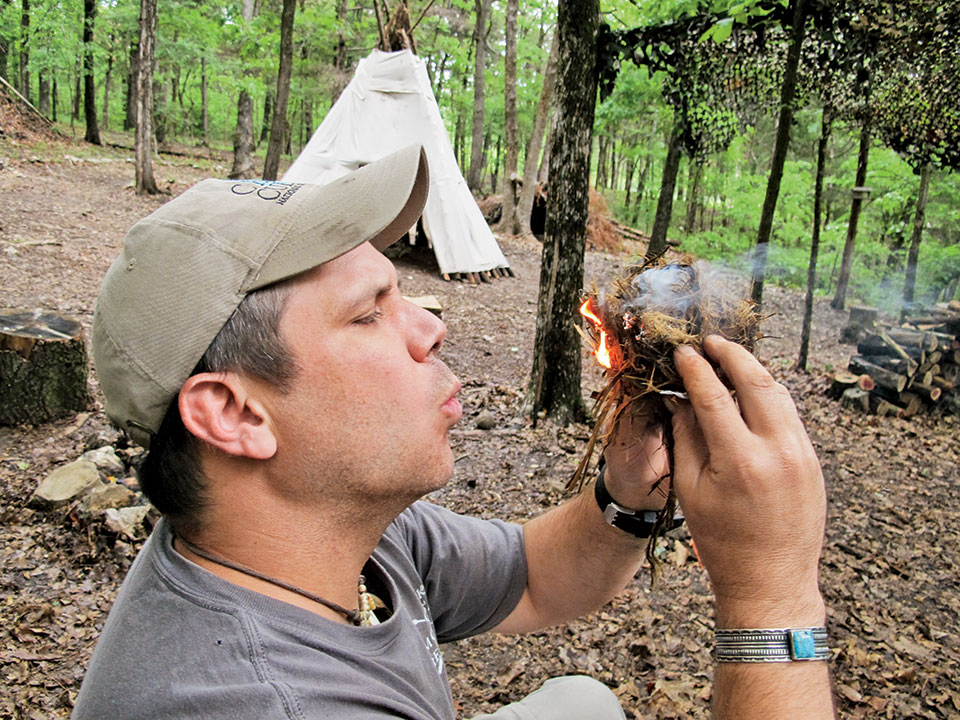 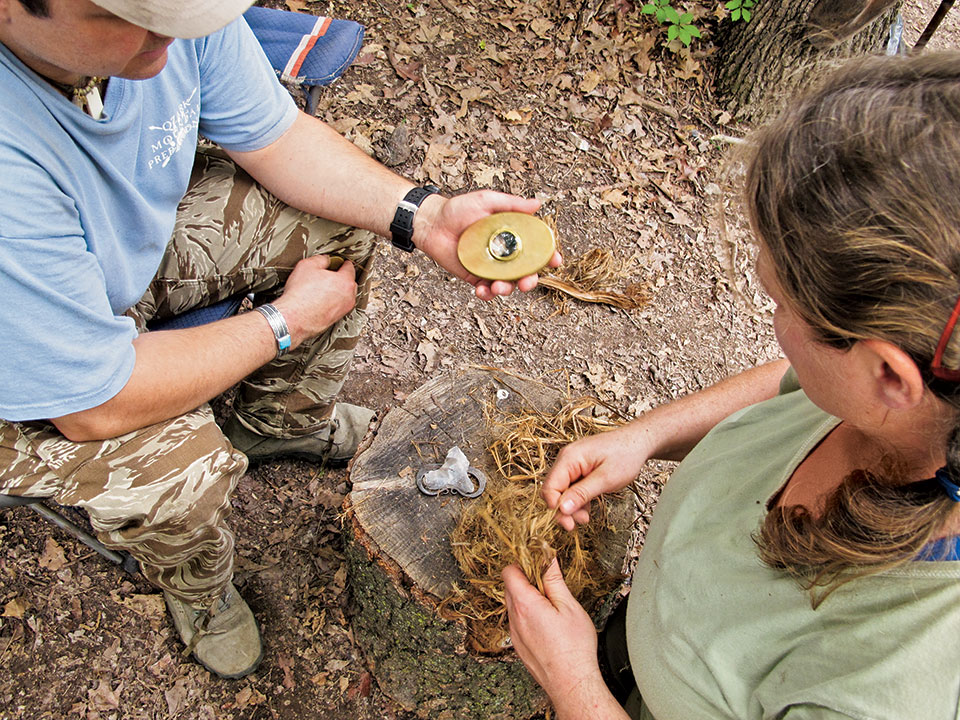 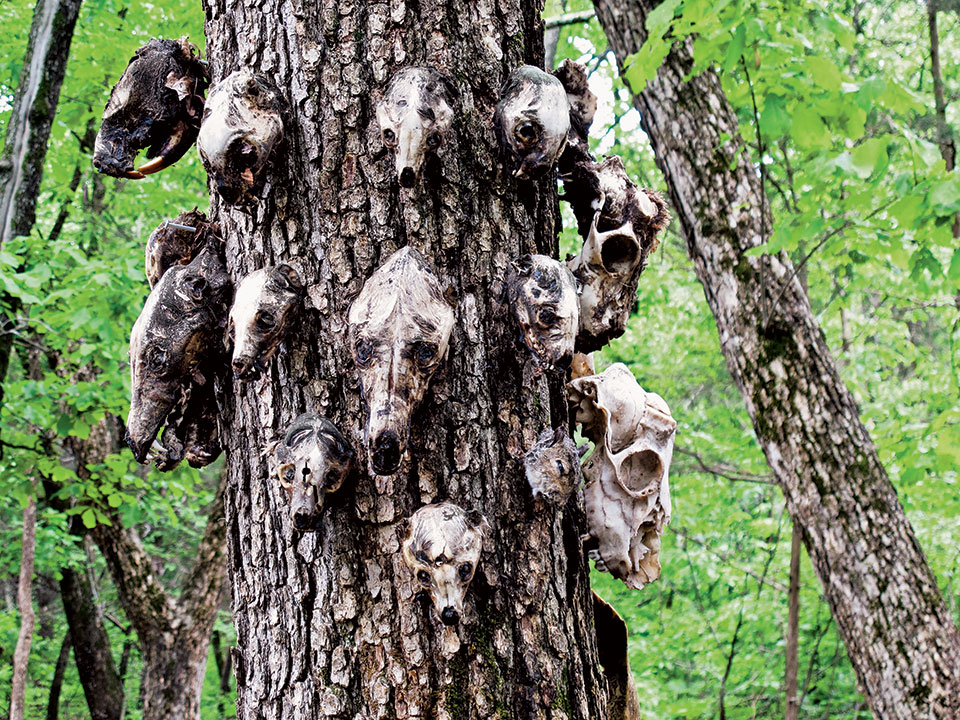 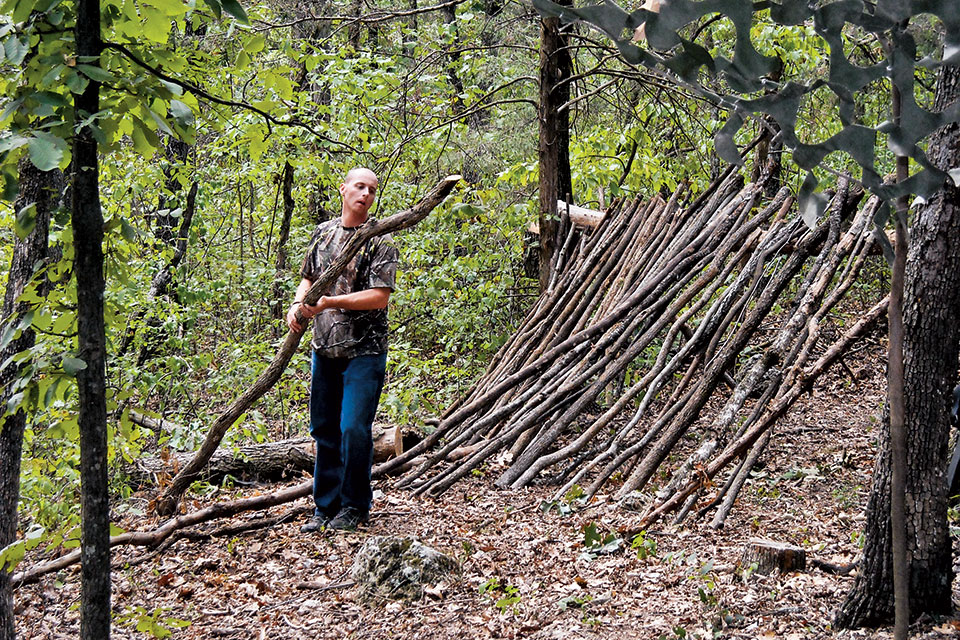 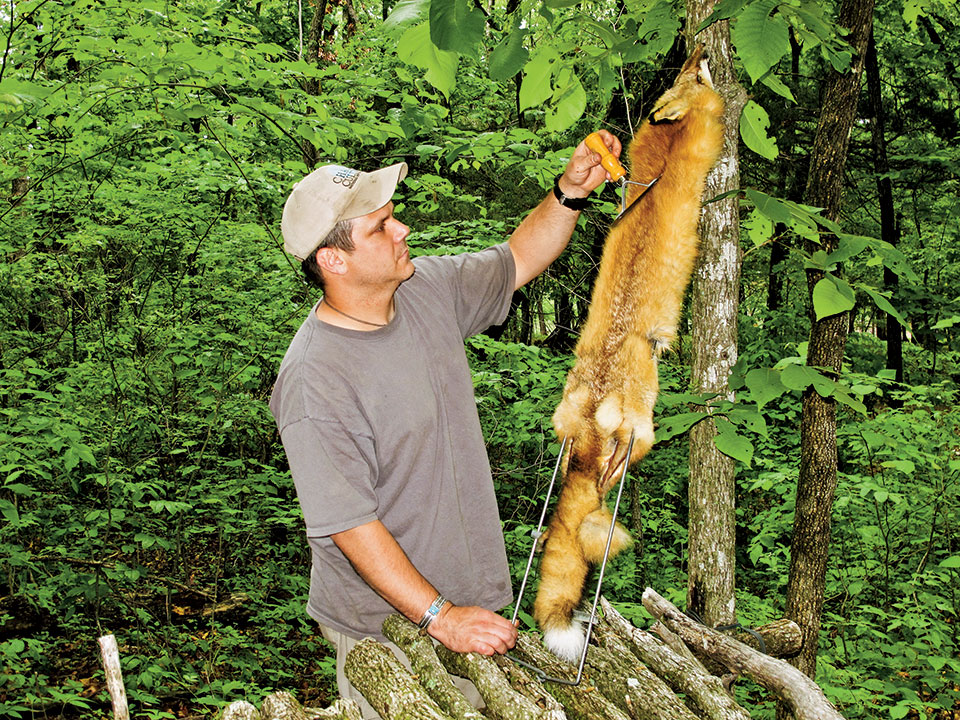 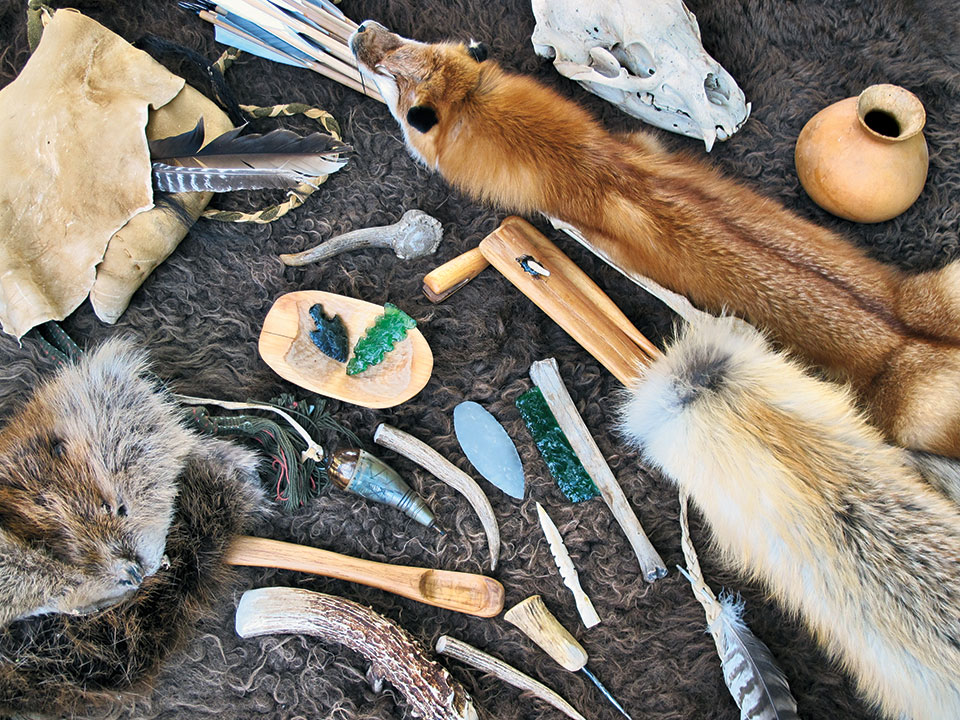 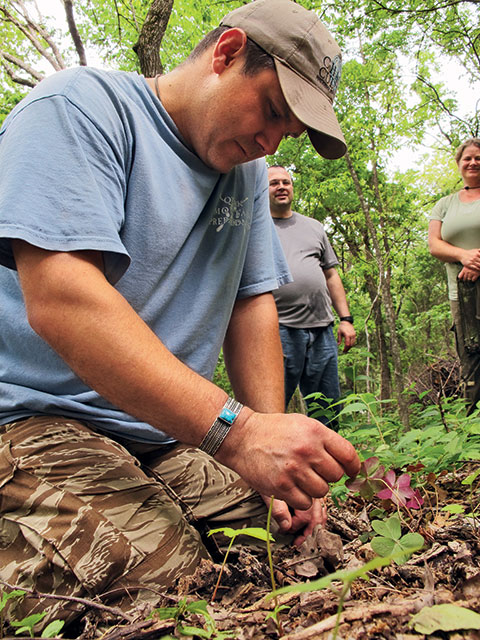 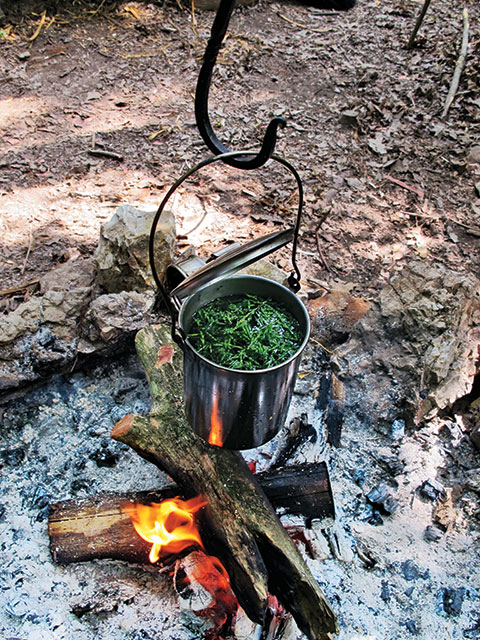 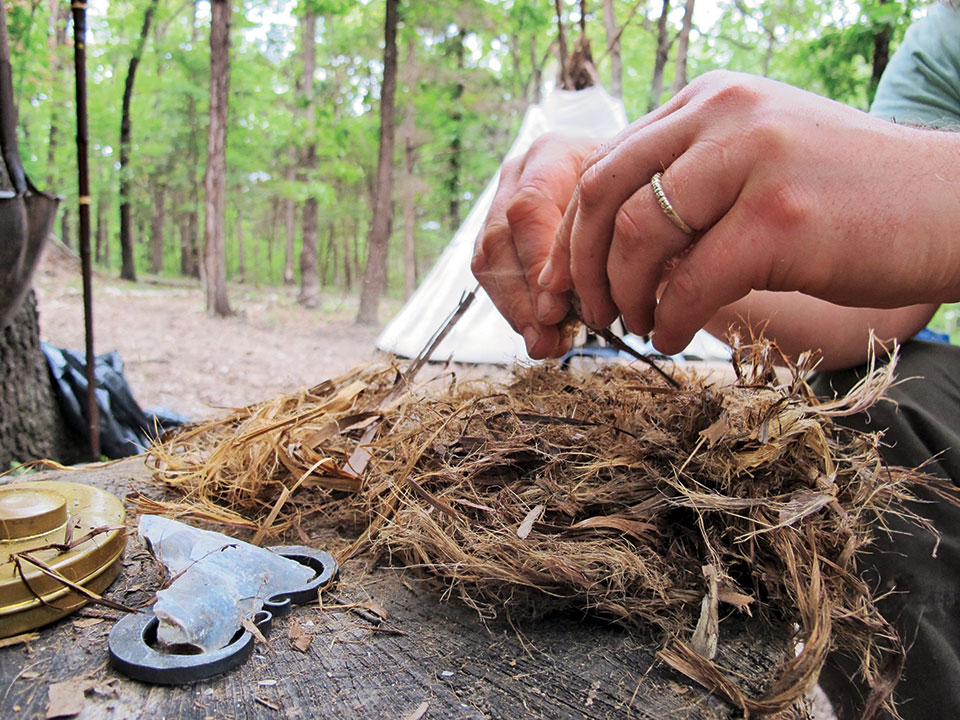 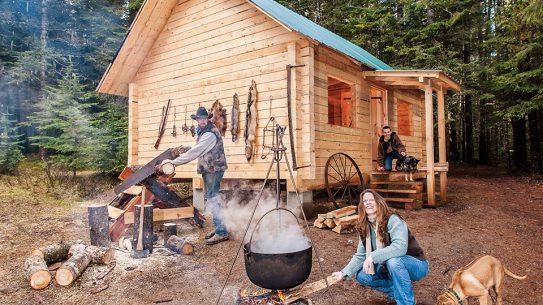 How to Make Beeswax Lip Balm

A collection of helpful hints and easy do-it-yourself projects for the pioneer in you!