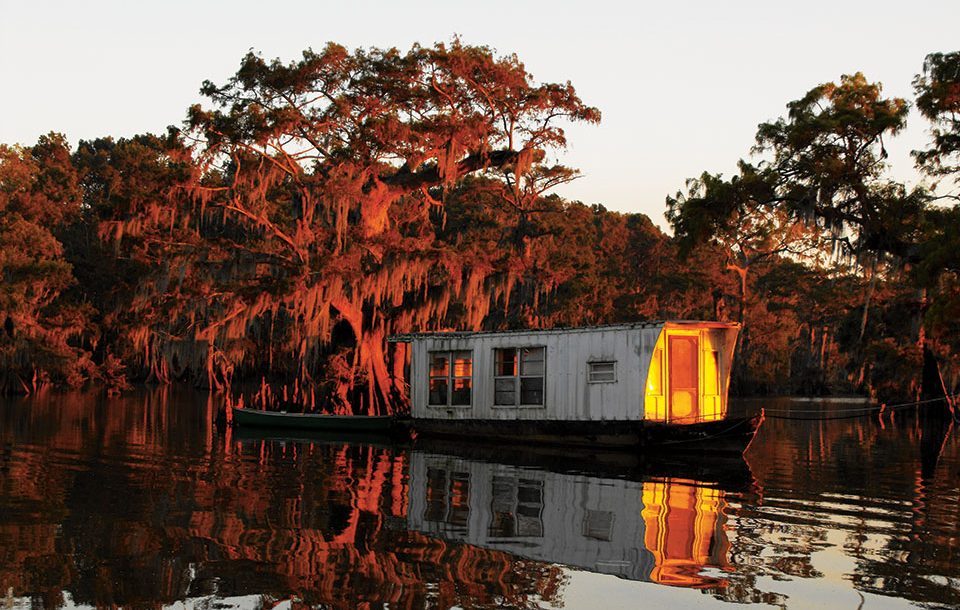 Shrouded by cypress trees, Greg Guirard slowly wades through knee-deep water, pulling his pirogue filled with buckets of bait and crawfish. It’s been one of the worst crops in more than 10 years, but he always finds a way to make a living inside the Louisiana swamps.

He built this crawfish pond on his property 20 years ago. He cleared trash trees, planted cypress, dug the pond and filled it with water pumped from nearby Bayou Amy. Most of the crawfish live in the ground and come up in early winter, so he fills the pond in the fall and seeds it with live crawfish caught in the nearby Atchafalaya Basin. With a good crop, he will have his first boil in December and hopefully make a profit selling sacks of live crawfish.

In past years he crawfished the basin’s bayous, but now ponds out-produce the basin. He enjoys taking his grandchildren to the pond to help empty and bait the traps. “I love crawfishing,” he says. “It’s really fun when you are catching them, but making a living is hard.”

Dedicated to living the lifestyle of his Cajun ancestors, Greg credits his grandfather, Wade O. Martin Sr., five- term sheriff of St. Martin Parish, along with writers Henry David Thoreau and William Faulkner, for his passion to preserve this land and the Cajun culture. Cajuns are descendants of the Acadians, who were French set- tlers exiled from Nova Scotia in the mid-18th century by the British. Over the next 100 years, Acadian, German, Spanish, French, English and Indian influences melded together to form a new, Cajun culture.

The Cajuns built homes along Loui- siana’s aquatic countryside. Among them were the Guirard family, who settled outside the small town of Catahoula at the turn of the 20th century, a time when timber was king. The lumber lords logged the giant cypress almost to extinc- tion, from the end of the Civil War to the 1930s.

Greg spent hours in the basin as a child with his grandfather—hunting, fishing, learning the history and listening to the tales of nature. He never forgets his grandfather’s words: “Wish you could have seen the swamp like I did.” Today, these words haunt him as he repeats the history and tales to his own grandchildren.

The Do-It-All Cajun
Now in his 70s, Greg has lived a full life as English professor, farmer, cattle- man, carpenter, furniture maker, saw- mill worker, crew-boat driver, craw-fisherman, speaker, photographer, author, actor and technical advisor for film production. He has a degree in agronomy, a masters in English literature and a rare fluency in the Cajun French language. A divorced father of four, he has never remarried and enjoys the freedom of a simple life, doing whatever it takes to stay on this land of dreams. “I enjoy the photography the most,” he says. “Going out to the swamps is like a treasure hunt for me.”

Greg has planted 40,000 trees, a mix of over 20 species of oak, cy- press, birch and poplar. It wasn’t an easy task—the land was impenetrable and consumed with snarled vines and trash trees. He hired a bulldozer to clear enough room so he could bush-hog the weeds and control encroaching trees. Now the oaks have room to grow. “I want to put the land back the way it was before they started clearing it in the early 20th century,” Greg says. “It’s a full-time job. If I didn’t do anything else, I could stay busy every day cutting trash trees.”

Sinker Logging
In the mid ’70s, supporting a wife and four children on a teacher’s salary, Greg began to fall deeper in debt and turned to a more traditional way of life. He quit teaching, began collecting driftwood and sinker cypress logs and earned a living making furniture. When the virgin cypress forests were cut in the 19th and early 20th centuries, many were lost in the water. They are called sinkers because they were not supported by barrels or floatation devices and sank. Cypress contains a good deal of oil, resulting in a very dense wood that is resistant to rot and termites.

Greg has pulled hundreds of sinker logs ranging from 18 to 36 inches in diameter. The longest log was 82 feet, and one 60-foot piece was straight as a ruler. Harvesting sinker cypress connects him to a time when the basin towered with virgin cypress, each tree having a diameter of 8 to 9 feet and rising 120 to 140 feet.

Most locals work the narrow bayous with a standard aluminum boat, normally 16 to 17 feet long with a 40-horsepow- er motor. Greg hunts for sinker cypress when the water table is very low. “I mostly find them when walking across the bottom of the swamp. I tie them up, then attach a pontoon or large piece of Styrofoam to one end of the log,” he explains, noting that they are too heavy to move. “I leave the log tied there until spring, when the waters float it high enough so I can pull it out with my boat.”

It can take four to six hours to haul the heavy logs back to the launch, depending on location, size and number. Using his pickup, Greg guides the trailer down the boat ramp until it is almost completely covered in water. He then moves the floating logs onto the trailer and heads back to the swamp for more logs. “I usually load it up with three or four logs and bring them straight to the mill sopping wet,” he says.

Bayou Homestead
Greg’s homestead rests on Bayou Amy. The curled branches of live oaks hold some odd relics, like an old outboard and a sinker cypress log consumed by holes. Under a large oak, a 25-square- foot metal warehouse holds the milled lumber along with his woodshop. It’s a carpenter’s dream, each piece unique in color, pattern and weight. A closer look reveals slanted axe marks on some of the pieces, which could indicate a tree cut prior to the Civil War. Greg explains, “If the big end of a log is cut slanted rather than straight across, it usually means the tree was cut down before the Civil War, since crosscut saws were used almost exclusively after the war.”

For a long time, Greg sold the lumber to the public but recently began reserving it for furniture making and family requests. The pieces are milled with a straight edge and a natural edge. Then the straight edges are pressed together to form a tabletop. A friend crafts the legs, which Greg adds to the tabletops. Finally, Greg finishes the table with several rounds of sanding and varnish.

Inside and out, Greg’s cabin is built with cypress lumber drawn from the Atchafalaya Basin. He’s especially fond of the screened-in porch for an afternoon snooze. “Sleeping there is the next best thing to sleeping outside on the ground,” he says. “I hear bird and animal noises, usually owls, frogs, bobcats, alligators, as well as the wind in the trees, fish jumping in the nearby water, and dogs howling miles away.”

Moved by the basin’s infinite beauty, Greg continues to record its sights and sounds, harvest the crawfish and ancient sinker logs, plant native trees and preserve the Cajun culture. Over the last 40 years he has been preaching the basin’s beauty in his lectures, books and photographs. His camera never leaves his side.

The photography itself can be a painstaking process; catching a sun- rise is not a chance occurrence for him. Determined to get the perfect shot, Greg built a wooden platform squeezed between three cypress overlooking a corridor of trees. For one memorable image, he braved the predawn dark, cold and foggy waters to capture a blue heron perched on a stump in front of the rising sun. In his book Atchafalaya Autumn he writes, “There’s something about being out in the swamp, especially when you’re alone, that seems to suck the poisons of civilization out of you, some sort of healing power that lets you be yourself again.” 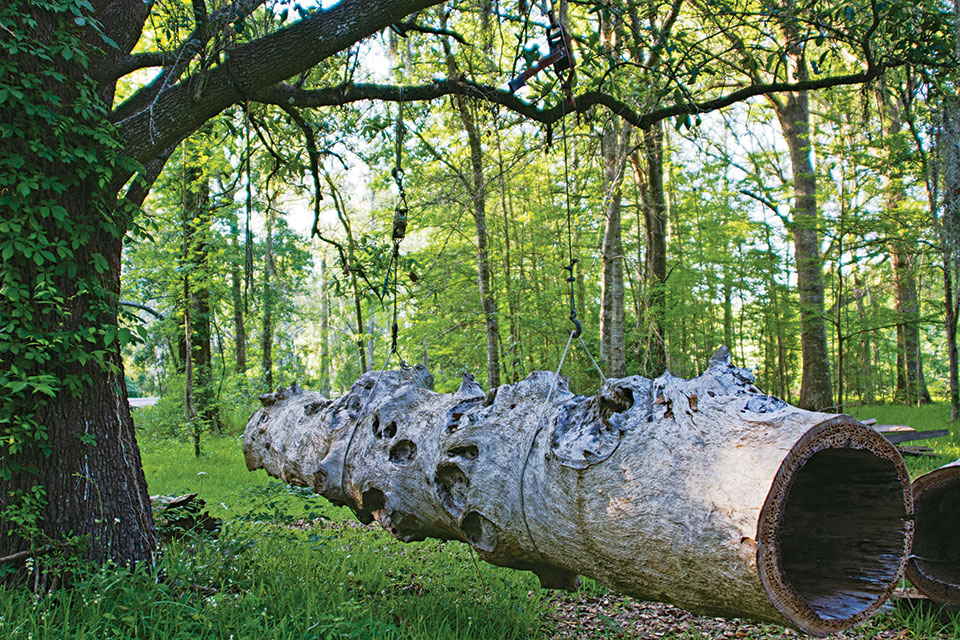 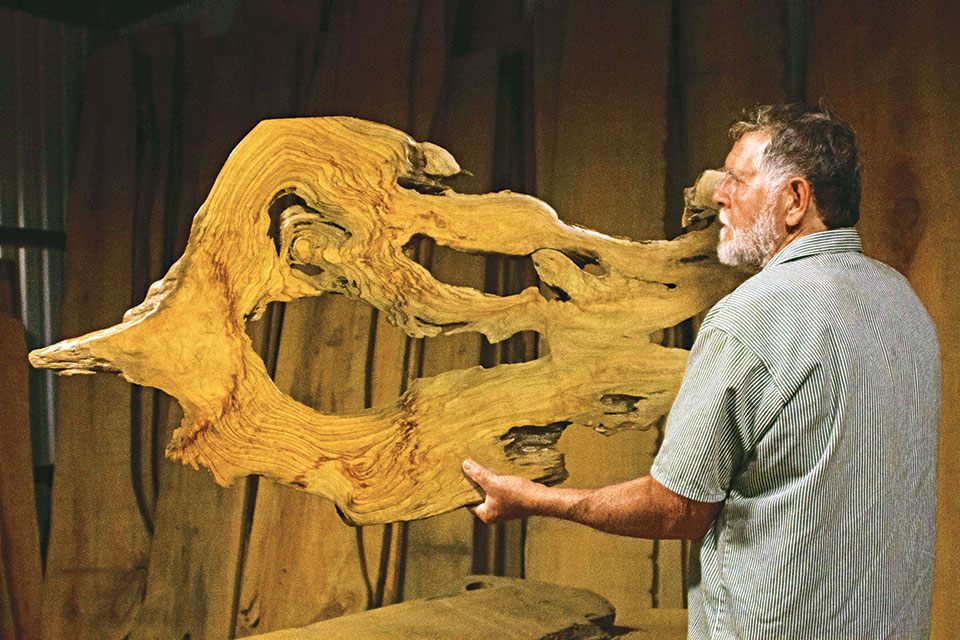 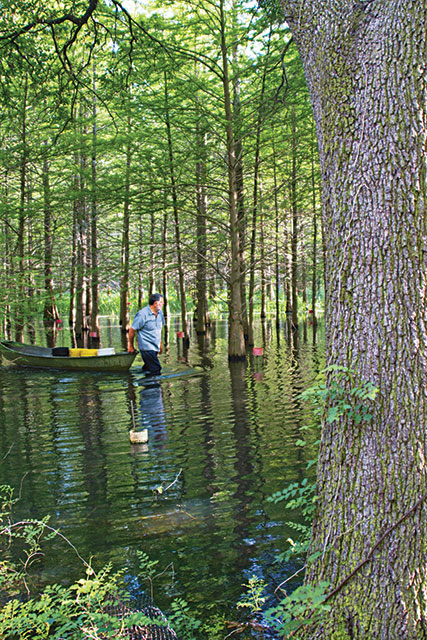 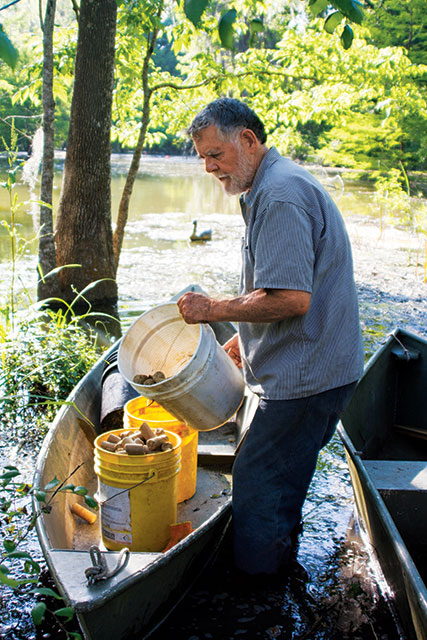 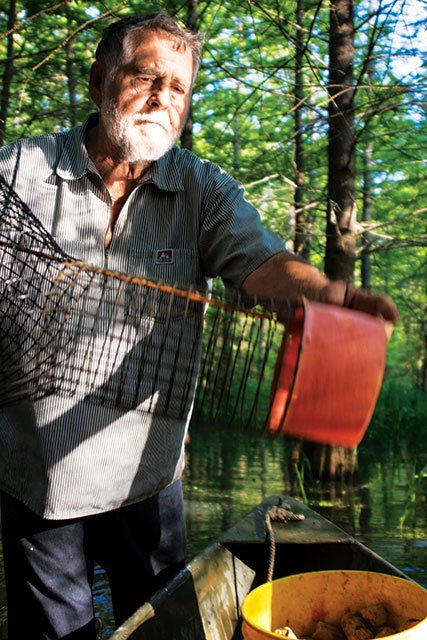 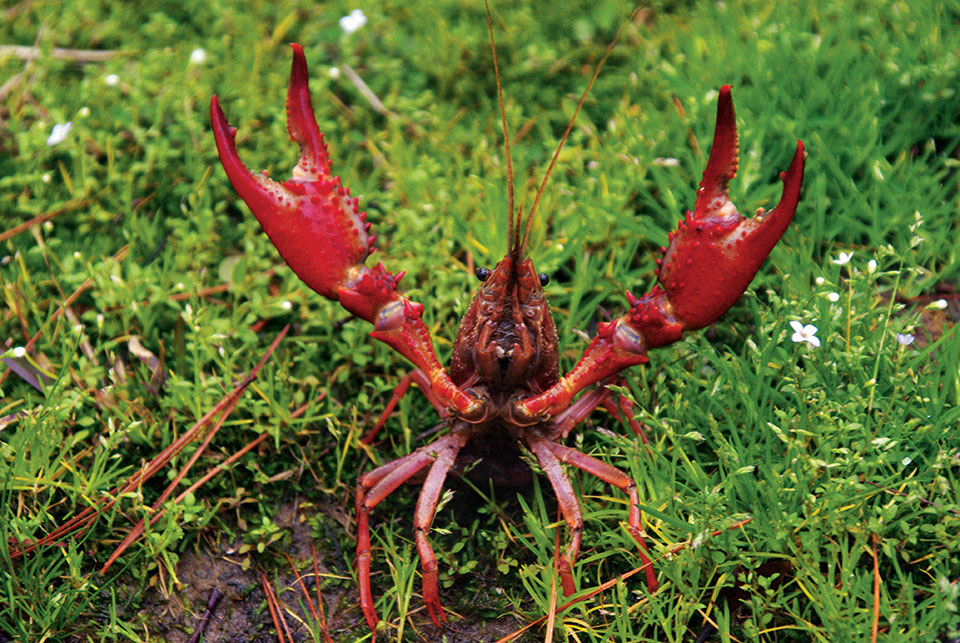 Visit gregguirard.com to learn more about Greg and his books. 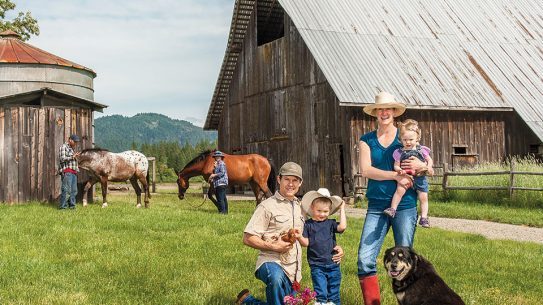