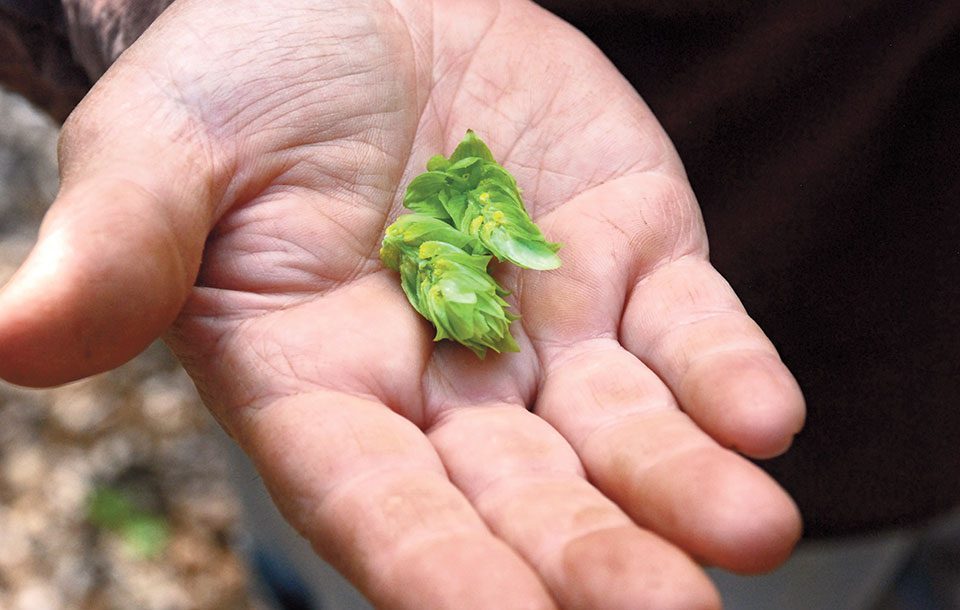 Without beer, hops are vigorous weed. Beer without hops, well, I’d rather not even think about it. No conversation about one is complete without the other. The pair have been joined at the hip for centuries, but it wasn’t always so. Before hops caught on as the spice of choice for beer, aromatic plants like mugwort and yarrow were popular.

Ironically, it wasn’t for flavor that hops won out. Oils in the hop cone are a natural preservative and were used for that reason. India Pale Ale is thought of as a “style” of beer, but in fact, it was more a byproduct of shipping techniques than a style.

English Pale Ale shipped to India did not travel well due to hot temperatures and wood barrels. But the same barrel, half full of dried hop flowers and topped off with ale, stayed totally fresh and tasty.

Hops have been a cash crop in the U.S. since the early 1800s. Native wild hops crossbred with European Noble hops led to the staggering varieties available today. Hops grow worldwide in latitudes between 35 to 55 degrees, but it was in the Pacific Northwest that the plant found just what it liked. Today, Washington State alone annually produces 30,000 tons of hops.

Local brewers in the 1970s, eager to test the limits of yeast, barley, water and hops, began to rekindle the old flame between hops and beer. By the 1980s hoppy, flavorful micro-brewed beers started creeping out onto store shelves in a wider and wider circle. Today, small craft breweries are popping up around the country like dandelions. This is good news for a commercial hop grower. The current popularity of heavily hopped IPAs, requiring two to three times the amount of hops than more traditional brews, doesn’t hurt either. 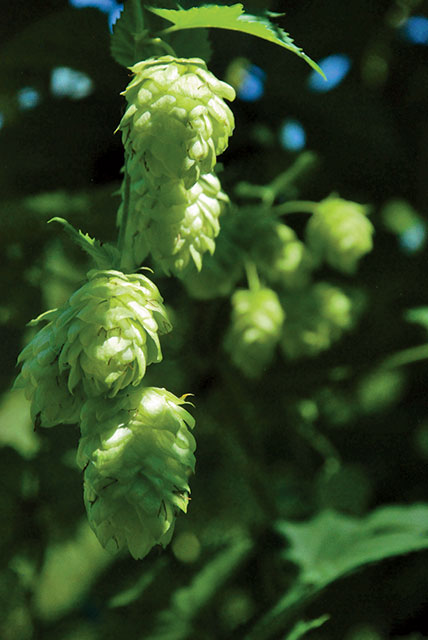 Growing Tips
Variety selection is the first hurdle for the potential grower. There are hundreds of choices with new strains appearing every year. For the small, local grower the best bet is to start by talking with potential customers. Find out what they are using now and what they wish they could get their hands on. Standards like Cascade, Chinook or Goldings will always have a market.

Newer, trendy varieties have huge potential but also carry the greatest risk. In the last couple of years, the new Mosaic variety has gotten lots of attention. Its unique blend of bitter alpha acids and high aromatic oils makes it highly sought after while production remains relatively low. For a grower with 200 Mosaic plants ready to go into production, this could be a boom. Doom would be waiting the two to three years for young starts to mature only to watch current trends shift to the next big thing. No matter your choices, it is wise to grow at least a couple of varieties. Start with one high alpha bitter and one mellow alpha having good aroma character.

Plant Cuttings
The commercial hop yard is best built off of root cuttings (hops are rhizomes). Hops are easy to grow using this method, and it offers many benefits to the grower. First, starts give you a two-year advantage over sowing seed. They can be male or female. The female is the workhorse of the hop yard, and male plants are discouraged. Root starts will be a clone of the plant they are taken from, so only use starts from a female plant. 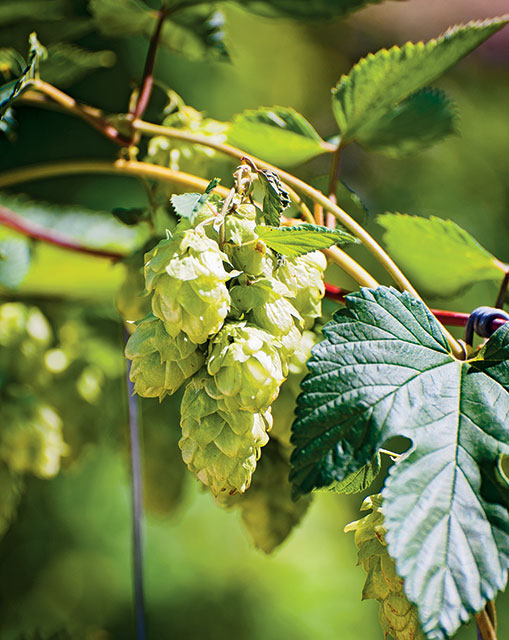 Beware The Hop Snatchers
Hops are tough and hardy, but they are still susceptible to some diseases and insect pests. New York State was once a major hop producer. In 1909 the crop was devastated by powdery mildew. Sulfur-based fungicides brought it back around only to have it be wiped out again in the 1920s by downy mildew.

Both types of mildew are best controlled with good hygiene, mulch and drip irrigation. Young spring shoots are most susceptible. At the first sign of mildew, the grower must remove these starts and burn them well away from the hop yard.
Hops like moist soil, but don’t like being wet. Applying a heavy top mulch in the fall will get young shoots off to a good start. Aphids are the number one insect of consequence. The best natural defense against them is lacewings and ladybugs. Inter-cropping with shade-loving plants that attract these beneficial insects is an excellent use of space between the rows. 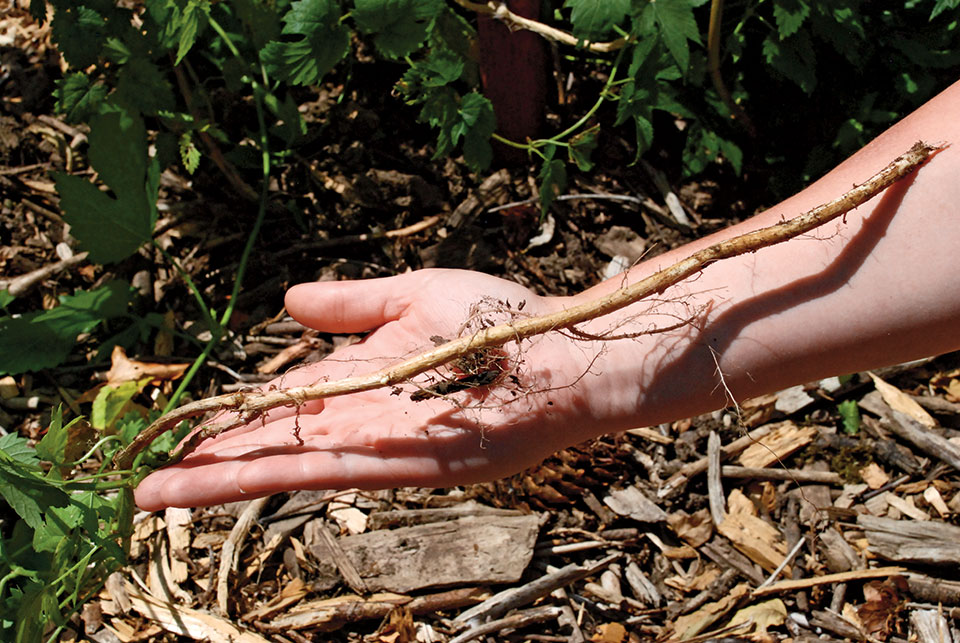 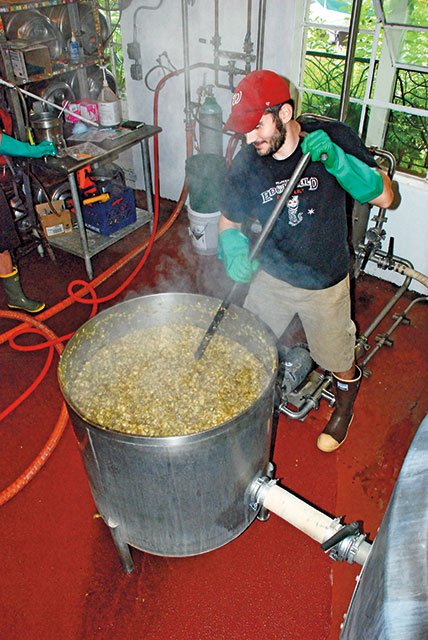 Try Trellising
Hops are impressive climbers. Growing as much as 30-feet tall in a single season, they need some permanent infrastructure. The typical trellis consists of a single cable supported on poles 20-feet tall. Running over the top of each row, biodegradable cord is run each spring from the base of one plant over the top of the cable and back down to the next plant in the row. Other trellis designs are out there, but this method has become the standard for commercial growers.

Spring in the hop yard is full of activity—running up the trellis cords, training young shoots and pruning back all but two or three healthy shoots from each crown. During the summer it’s mostly pruning as needed and irrigating. Early fall is when things start to get exciting. As the harvest approaches, flower cones are sampled daily.

Breaking open the flowers for visual inspection and crushing them up in your palms and smelling them are the best ways to tell when they are ready to harvest. You are looking for lots of yellow resin inside and that classic hops smell. After harvest, the fresh flowers can be vacuum packed and refrigerated, frozen or dried. (Regardless of the method employed, the aromatic oils and bittering oils will break down over time.)

Selling Local
For large, high-production hop yards, the market is easily accessible. It’s not so simple for the grower with just 1 or 2 acres. The smaller the yearly harvest, the smaller the market. A great option for the small grower is the smaller local market. Confine your search to customers who are brewing on the same scale as you are growing. A larger brewery that runs through 100 pounds of hops a day will have little interest in your 200-pound annual harvest.

If your product is very unique and of exceptional quality, you may have a shot, but beware of the “all your eggs in one basket” situation. An emerging market of interest to the small-scale grower is organic beer. As other organic products gain in popularity, beer is following suit. A small hop yard is easy to manage without chemicals, and doing so opens you up to a wider market. Aside from breweries, get to know your local home brewers and the shops and clubs that support them. A potential side benefit to this relationship is a list of folks willing to help out come harvest time.

Notes From A Brewmaster
To be a successful hop grower, it’s important to know a little about brewing beer. To get the low down on the roll hops plays, I talked to brewmaster Jeff Cooley and crew at McMenamins Edgefield Brewery in Troutdale, Oregon. The value of hops to the brewer is contained in the lubulin glands tucked in each flower.

When mature, these glands produce a yellow resin powder, rich in oils and other chemical compounds. Each variety has its own unique characteristics that lend it to certain styles of beer. How and when hops are added during the process determine which of these characteristics are highlighted.

On the day I visited, the guys were brewing a 1,200-gallon batch of bold, double-hopped Northwest IPA. Getting heavy, up-front hop bitter with smooth edges and a clean, citrus and pine aroma requires lots of hops and some tricky cooking. Heavy on alpha acids, varieties like Chinook and Centennial are added to the wort at the beginning of the boil. This supplies a balanced bitter. As the boil progresses, other varieties are added.

Timing is critical, as the boil time determines which of the hops’ traits are extracted. A long boil will draw out the bitter alpha acids, but also cook away delicate oils that add the trademark “piney” or “citrusy” aroma. As the boil time ticks down, the brew crew added varieties like Citra, known for its aromatic qualities.

With some 85 pounds of whole, dried hop flowers in the tank, Jeff and his crew had one more trick up their sleeves. The boil now completed, they pumped the wort to the fermentation tanks. Along the way it was run though a secondary tank and filtered through 11 more pounds of a secret blend of hops. That works out to about a third of an ounce or one good handful of flowers per pint! 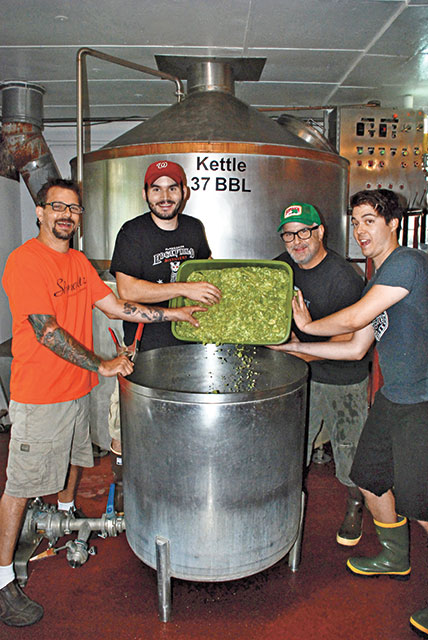 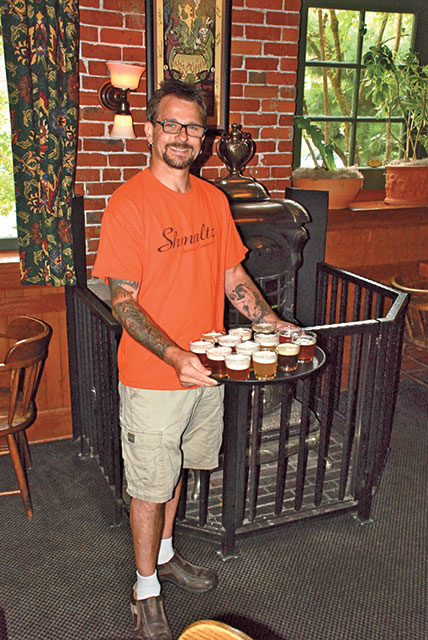 Other Hops Moneymakers
Long known for their sedative properties, mature flowers are packed in “dream pillows” to help induce restful sleep. Dried vines can be used as cordage, and tender spring shoots are often eaten like asparagus. Selling starts is also another good source of income.

Whether you have a single plant or acres of them, hops are fascinating, growing as much as a foot a day in the right conditions. If a local market is available, they can be very profitable on a small scale. For the home brewer with a little space (mostly vertical), growing a couple of hop plants is a no-brainer. If you already have hops, but are not brewing, Portland local Tom Traver has some good advice. “If you like to cook and have some scientist in you, go for it!” 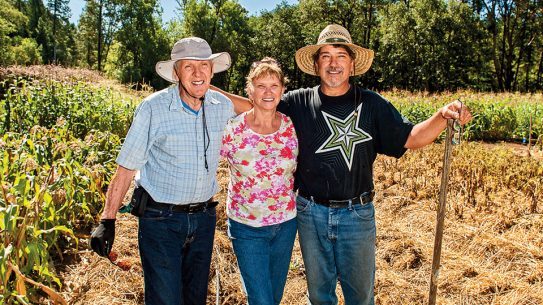 From backyard garden boxes to a 33-acre piece of heaven, the Eden’s Edge success...