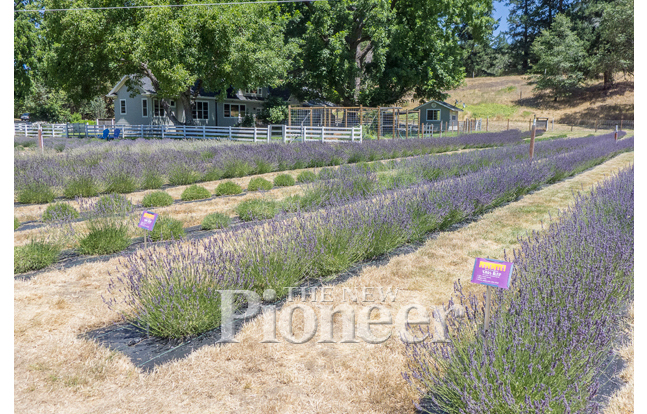 John Rinaldi, a former surveyor, laid the lavender beds out with an engineer’s precision. Some of the plants have already been cut back to use in the distilling process.
Comment(s)

John and Bonnie Rinaldi are living the life of lavender at their Lavender Fields Forever farm in southwestern Oregon. It’s a long way from their former life in Las Vegas, where John worked as a land surveyor/property manager and Bonnie as a land-use planner and city/county administrator.

“We loved our work,” John said. “We had very exciting jobs. We loved it, and it was great doing public service.”

But they were ready to leave the desert and do something else. So they headed to Oregon and eventually settled in the southern part of the state.

“We weren’t ready to retire completely. We wanted to be active,” Bonnie said. “We were enthralled with the other things that people were growing in this area.”

“What you can grow here is so phenomenal,” added John. “We wanted to be a part of it.”

The Rinaldis wanted their own small farm but initially thought they’d grow another hue of blue in the form of blueberries.

Five-Acre Dream
After months of searching, they found their perfect five-acre property in the Applegate Valley of southern Oregon. They quickly realized that the climate there was a bit too warm for blueberries, but it was perfect for lavender.

The first years were spent fixing up the farm and transforming the 3,000-square-foot barn into the headquarters for their lavender enterprise.

“We knew we could put the barn to good use,” John said of the soaring structure. Using a looped-chain mechanism, the Rinaldis hoist bundles of cut lavender into the barn rafters, where it takes about a week to dry.

Out in their cozy 1-acre growing field, they planted seven varieties of lavender, mixing in English (Lavandula angustifolia) and hybrid (Lavandula x intermedia) types. “We picked ones that grew well in our climate,” John explained.

Additionally, they included types such as “Gros Bleu” that, with its long stems and bright color, is perfect for wreaths and craft products. Pink- and white-flowered lavenders also create nice additions for craft projects. “Grosso,” grown around the world for essential oil production, makes up about 25 percent of their plant stock. And then they added types that are best suited for culinary purposes.

“People are pretty amazed at such a variety,” Bonnie said.

While the former pasture had overhead sprinkler irrigation, they opted to use a drip irrigation system to establish the plants. Since lavender is native to the Mediterranean region, it doesn’t require a lot of water.

An Ancient Herb
It is a fact that lavenders have been cultivated for centuries and have been used as medicine, for flavoring, and perhaps more commonly, as a sweet aromatic. “The Romans took it north and added it to their baths. It’s very calming and relaxing,” noted John.

Today, lavender continues to be used for cleansing and refreshing the body and soul.

“It’s great for aromatherapy,” Bonnie explained. The soothing scent “goes straight to the part of the brain that works on fight or flight.”

And it’s not just the scent that addicts people. “Lavender is a great bee habitat,” John said. “The bumble bees will spend the night in the blossoms.”

“It’s as if they are drunk,” Bonnie added, with a smile.

Team Lavender
The Rinaldis were not the first in their neighborhood to consider growing lavender as an agribusiness. They met other growers who shared their enthusiasm for the plant and its products at an herb conference held in the area.

While they planned and developed their own farm, the Rinaldis also thought they could help expand the interest in lavender and its products throughout the region.

“We contacted everyone growing it and said ‘let’s do things together and we will have a lavender presence,’” John recalled.

They agreed, and the lavender growers created the Southern Oregon Lavender Trail. “Jointly, we have more to offer than any of us individually,” Bonnie explained.

The group decided to team up with the much larger statewide Oregon Lavender Festival, a project of the Oregon Lavender Association, which promotes lavender as a viable agribusiness throughout the state. During the association’s annual festival, lavender farms open up for tours and special events on the second weekend of July. This past year marked the first time that the local growers promoted their Southern Oregon Lavender Trail as a coordinated event.

Fresh Flower Season
The prime season for visitors is from July through mid-August, when the lavender is in full bloom and the Rinaldis open their farm to visitors Fridays through Sundays.

“We offer a U-pick, which is very popular. People will come by just to pick a bouquet,” said Bonnie. “We’ve been pleased by the amount of traffic.”

The rule of thumb is that a typical lavender plant can produce up to five bundles of blooms with between 150 to 200 stems per bundle.

When the fresh flower season fades, the Rinaldis spend their time cutting the remaining blooms and either drying them or processing them into lavender oil. During the fall, they trim their plants to keep the shrub compact. “We want them vibrant and productive. If you don’t prune them properly they get too rangy.” she said.

There’s always something to do, whether in the barn or the field.

“The growing part happens when people are not here,” Bonnie explained. “We’re mowing, weeding and watering.”

They also hold workshops in creating lavender crafts, such as wreaths, wands and baskets, and showing people how to distill lavender.

Beyond Hobby Farming
During the winter, they’re working on their product line.

“We’ve been having a ball with product development,” said John. Their goal, added Bonnie, is to become sustainable, “to produce enough lavender to meet the oil and fresh bloom needs.” And while John thinks that the small-scale lavender grower and product producer could make a living at the endeavor, especially if he sold products through an online outlet, Bonnie noted that “for now, it’s a hobby that supports itself.”

In their cozy store tucked into a corner of the barn, products are displayed for sale, ranging from soaps with lavender scent, lavender honey and preserves to hand sanitizers, essential oil and packets of dried lavender buds. It’s a mix of products from their own labors as well as from other lavender growers in the area.

John doesn’t foresee making many changes, “We haven’t planned to have any other outlets or to sell online.”

“We want people to come here for the products, of course, said Bonnie, “but our main objective is for people to have the lavender experience. 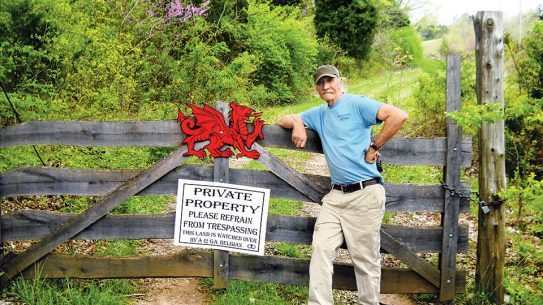