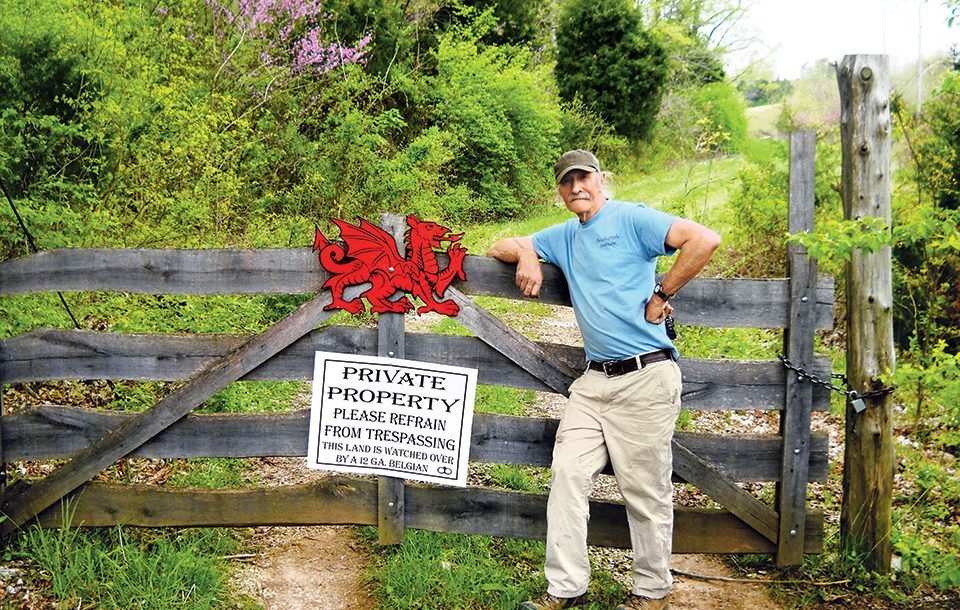 The first thing one notices upon walking into Don Weber’s workshop in the bend-of-the-road-community of Paint Lick in eastern Kentucky is a sense of quiet, relaxed focus. While Don does have power tools, he prefers to minimize their use in constructing his custom-built furniture, working primarily with hand tools that were commonly used prior to the advent of industrialized woodworking.

During the portion of the workweek he spends in his shop, the sounds you are most likely to hear are the whir of his foot-driven pole lathe, the chink of a hammer hitting a chisel or the smooth glide of a drawknife as he works a chunk of raw wood into a chair part. Between these sounds one will often hear the lilt of his Welsh brogue as he conducts one of his workshops, talks with a customer or chats with a curious visitor.

What’s A Bodger?
Don is a master woodworker, blacksmith and bodger. The first two are self-explanatory, but what is a bodger? As Don describes it, a bodger is a wood turner who turns the stumps, legs and rungs of Windsor chairs from green wood. The term “bodge” is British slang with a meaning similar to “cobble.” It came into use because of the manner in which bodgers would bodge together the spring-and-pole lathes (or boom-and-treadle lay/lathe, as it is known in Appalachia) they used to turn parts for chairs from unseasoned green wood.

In England, Ireland and Wales, a bodger worked out of a hut that he would build in the forest near the village for which he supplied furniture and farm implements. The bodger’s forest hut was essential to his craft, as he would need to forage green wood regularly for his chair-and lathe-making materials.

The Early Days
Don was born in upstate New York in 1944 on the cusp of World War II. Once the war broke out, his father was deployed behind enemy lines in Germany with the Office of Strategic Services (OSS). His mother had emigrated from Wales to America, and subsequently married his father, a German immigrant. She returned to Wales when the war broke out, bringing Don and his brother with her.

In Wales at that time, middle-school students were given the opportunity to decide if they wanted to go on to higher education, or choose a trade and begin work as an apprentice. Don enjoyed working with his hands much more than sitting in a classroom, so he apprenticed to a joinery shop at the age of 16. After his family returned to the United States to live in Connecticut, Don elected to go back and finish the apprenticeship he’d begun in Wales and England.

In the agricultural area of Llandrindod Wells, the woodlands were busy, populated by all sorts of artisans who kept the wheels of agriculture turning. They were busy not only making chairs, but also producing agricultural equipment for village farmers. When not crafting materials to support themselves and their community, bodgers turned out parts for factories producing Windsor chairs in High Wycombe outside of London.

Don quickly became fascinated with the bodgers and blacksmiths he would meet while wandering his forest “classroom.” Most bodgers were farmers themselves, working their farms in the summer and producing equipment during the winter. The equipment was primarily wooden and therefore would wear out during a season of heavy farming. Rather than visiting the local hardware store, they would simply produce new equipment and trade amongst the other members of the village. It was a self-supporting community that drove its own economy with little need for outside services or materials and limited monetary exchange.

Getting The Wood Goods
To gather materials, bodgers would forage the forest understory for coppiced material. Coppicing, as Don describes it, is “selective woodland management.” Coppiced wood is procured by selectively cutting trees and shrubs down to ground level to gather materials for constructing tools, fences and buildings. This method helps to maintain a renewable source of timber and makes room for new growth. Not just any tree will do, though.

Bodgers in the know specifically look for trees that sucker, meaning that they produce offshoots that grow straight and narrow. “If you cut wood really close to the earth and allow it to sucker, you’re going to get a lot of really thin rods, which can be used for fish traps, baskets and other utilitarian ware that was part of the economy,” Don explained.

Tools indispensable for coppicing include the felling axe, the bill-hook (or hand-bill) and the slasher (or hedging-hook). On Don’s homestead, he is cultivating a copse of willows in a marshy area by a creek that he plans on using as an ongoing source of bodging materials. 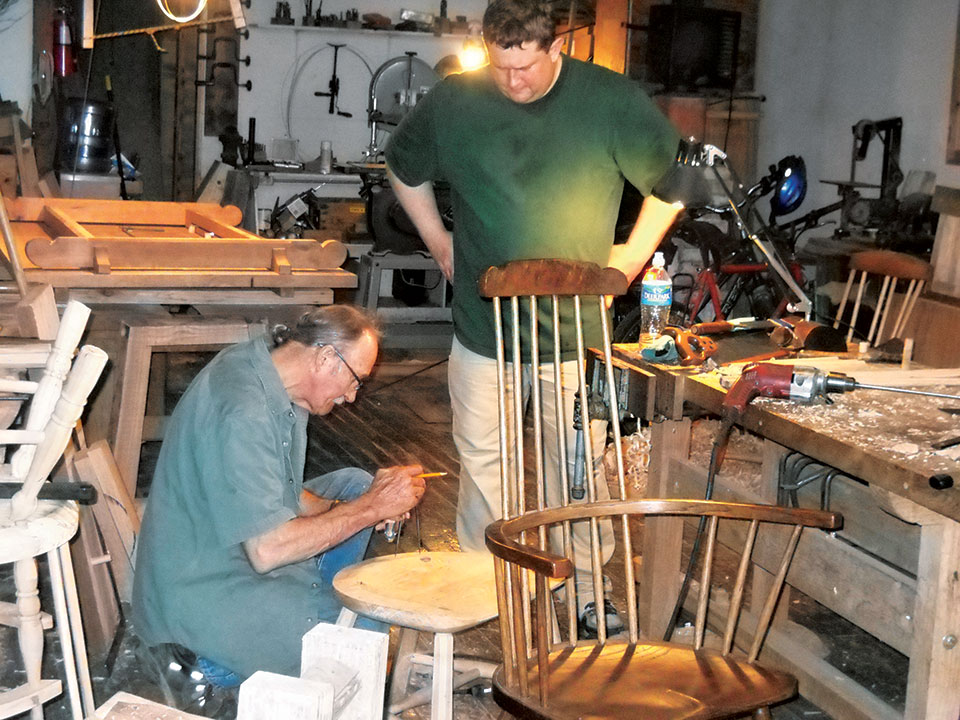 Back To The U.S.A.
Don returned to America in 1968, when he moved to Truth or Consequences, New Mexico, following an Irish friend, Terry Corcoran, who had married an American woman and moved to a commune near Las Cruces. Since he wasn’t interested in the communal life, Don sharecropped a nearby farm. When Corcoran and his wife moved to Mendocino, California, in 1979, Don followed them. While living in California, he worked summers at the Permaculture Institute in Vancouver, British Columbia.

“When I came to America, I happened to come during the time of the back-to-the-land movement,” said Don, “which is where I became involved with permaculture organizations.” One of these organizations was Linnaea Farm, a permaculture farm in British Columbia. Every year he would spend about a month working at Linnaea, primarily with the Klahoose First Nation, a Native American tribe indigenous to the region.

“I was invited by the tribe to create a cottage industry on the reserve using traditional tools and techniques,” Don said. One thing he taught them was surface carving so they could produce totems akin to those of their ancestors. They also built Welsh chairs, in which the Klahoose carved traditional patterns.

New Twist On Bodging
Don has travelled extensively, and lived in Ireland for a period out of a shepherd’s wagon behind an artist friend’s shop. He regularly travels to South America for the Maderaverde (GreenWood) Project, a group of woodworkers who instruct villagers in third-world countries on how to cultivate, harvest and convert understory trees into saleable products using tools that they produce themselves from locally salvaged items.

The bicycle-gear-driven lathe that Don invented for a workshop in Honduras was featured in an article Don wrote in the August 2007 issue of Popular Woodworking magazine. In a modern twist to the tradition of bodgers of yesteryear, he sets up shop in the area where he will be teaching and gathers all of his material locally, encouraging workshop participants to gather material from their own residences, scrapyards, and from sawmill and factory excess.

Don The Blacksmith
Don is also a blacksmith, forging tools for himself, and for customers who commission his work. He picked up his skill in blacksmithing through a chance meeting. “I was invited to demonstrate my pole lathe at a gathering of artisans,” he explained, “and I’d left some of the parts for my treadle lathe back at the shop.”

As he reluctantly prepared to make the drive of more than 100 miles back to his shop, a Swedish blacksmith named John Soini, who was set up beside him, said, “Why bother? We’ll make them.”

“So, the next morning,” Don continued, “we set up the forge, made some nuts and bolts, and we rebuilt my lathe right there.” After that, Don was intrigued by the idea of making his own tools and approached Soini about working for him.

For six years, Don spent three days a week with Soini, learning blacksmithing while teaching Soini woodworking so he could build the wooden fishing boat he’d always dreamed of. “We did that until he moved up to Port Townsend, Washington, to work at the wooden boat school doing metalwork and brightwork for boats, and teaching,” explained Don. 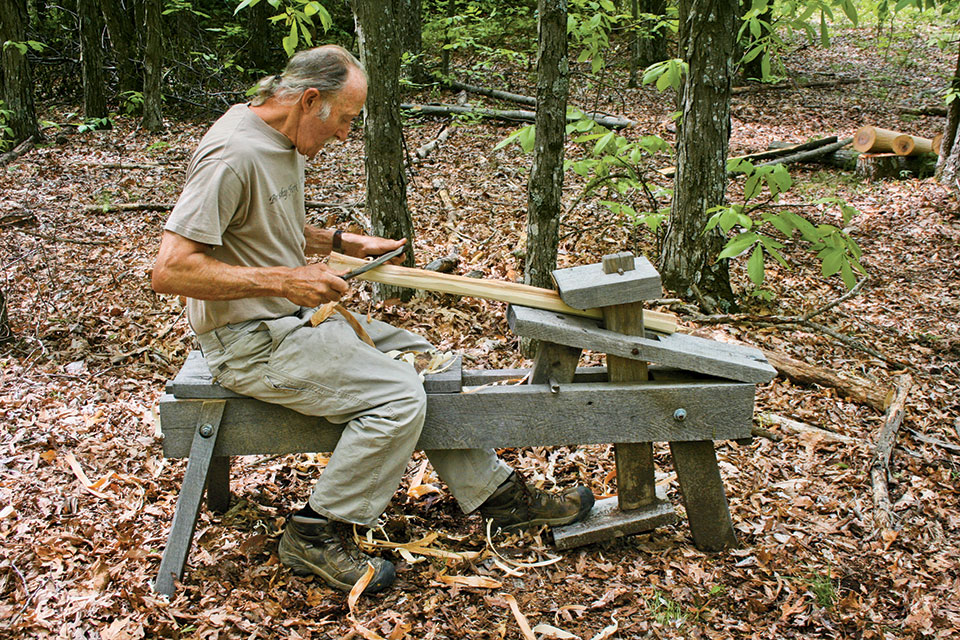 Shop And Homestead
Don and his wife Beth Curlin have recently moved out of their house in Berea, Kentucky, into an apartment Weber built above his shop in a building in Paint Lick, Kentucky that is listed on the National Register of Historic Places. He bought the building, the former Calico & Brown grocery store, in 1996. The store had been in operation since 1901, and was the last of the buildings in town that was still completely original.

His shop isn’t far from their 20-acre homestead in Garrard County, where he and his wife escape as often as they can to work on their garden, camp, gather woodworking materials and prepare the land for the house and farm they plan on constructing and retiring to within the next five years.

Their plans include installing fencing and transporting a barn they recently purchased to hold Nubian goats and Highland cattle, a yoga pad for Beth, and a writing/art studio in the style of a Japanese pagoda for Don. He wants to pursue his interests in sculpture and to write his life story. “I’ve met a lot of characters in my life,” he said. “I’d like to document some of the interesting times I’ve had.”

These characters include forefather of the self-sufficiency movement, John Seymour, master chairmaker Brian Boggs and bodger Samuel Rockall. Weber himself is a fascinating character, and has lived a life well worth documenting. He’s also a good friend, a great neighbor and a treasure trove of information that is important to preserve, particularly for those interested in living what his friend Rockall called an “all-inclusive lifestyle.”