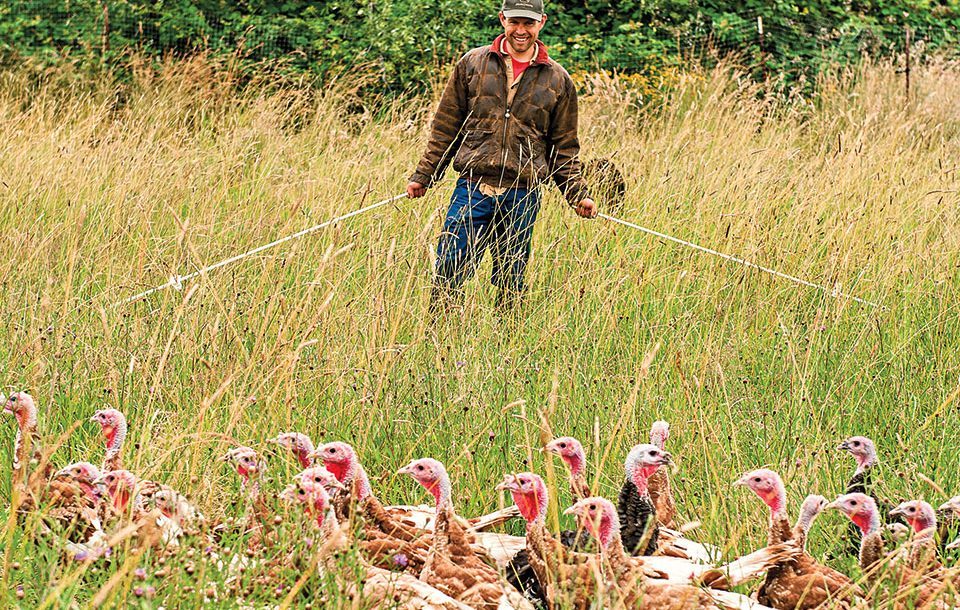 Turkeys are both fun and profitable, and can be a fine addition to the small farm. When considering if you should add a “rafter,” the name for a group of turkeys, a key decision to make is whether to raise conventional or heritage varieties.

Heritage Birds
Commercial institutions favor the conventional (or broad-breasted) varieties due to their superior ability to convert feed to meat in a short period of time and their fine table presentation. An added benefit for the small farmer is the availability of these birds at almost every feed store under the names “Broad-Breasted White” or “Broad-Breasted Bronze.”

Small farmers like me, however, increasingly prefer heritage varieties for several reasons. Raising them is a way to ensure independence. When you buy conventional turkeys at the feed store, you cannot mate them; they are physically incapable of breeding because the males have such large breasts. If they could mate, you would not get a stable animal since they are hybrids. But with heritage birds, you can collect eggs, incubate them and start a new flock.

Owing to their slower growth and more natural proportions of leg to breast, heritage turkeys enjoy significantly fewer health problems than commercial varieties. Not only does that better health translate to better profits, but it also contributes to the feeling that you have done something to make the world a better place.

Another virtue of heritage birds is taste. They hold more fat under their skin, which functions as a sort of automatic basting unit during roasting. Combine this with their muscle tone, which is better than that of conventional birds, and eating a heritage turkey has the potential to become a memorable dining experience.

As one who sells these birds for Thanksgiving Day feasts, I’ve found this usually to be the most important factor in the consumer’s buying decision. Since the holiday only comes around once a year, most chefs are willing to pay the premium price to improve their chance of impressing the table with “the best bird ever.”

One downside of raising heritage turkeys of interest to small farmers is their ability to fly. While young broad-breasted birds might only be able to leap a low fence, even fully grown heritage birds can easily make their way into trees, the highway or anywhere else they care to go. So unless you plan to raise the birds in confinement, clipping their flight feathers is an essential bit of monthly maintenance. At our farm, we clip only one of the wings because it takes half the time and, if they do try to fly, they’ll just go around in a circle.

Feeding Guidelines
Turkeys have a higher protein requirement in all stages of their life than chickens. For the first eight weeks of life, a diet of 28 percent protein (sometimes referred to as gamebird ration) is typical, while chickens typically receive a 21 percent ration for only the first week or two of life.

Unfortunately, this 28 percent protein ration is difficult to find in a form that has all of the ingredients certified organic. If you want to be 100 percent organic, you’ll probably need either to custom order the ration or mix it yourself from locally available sources. For example, let’s say you have a source of 44 percent soy meal and 21 percent chick starter. Doing the algebra, you would mix them in the ratio of about two parts chick starter to one part soy meal, which gives you a final protein mix of a bit over 28 percent. Another approach is to put your organic ideals aside for the first eight weeks of life and buy conventionally produced feed.

After about eight weeks, a turkey’s growth will slow down, and you need to ratchet down the protein accordingly. We’ve found the 21 percent chick starter to work well, and we continue them on this ratio until slaughter, which for us is in about 30 weeks. If your birds look overly fat or lethargic near the final weeks, consider dropping the protein even further to the 18 percent range. 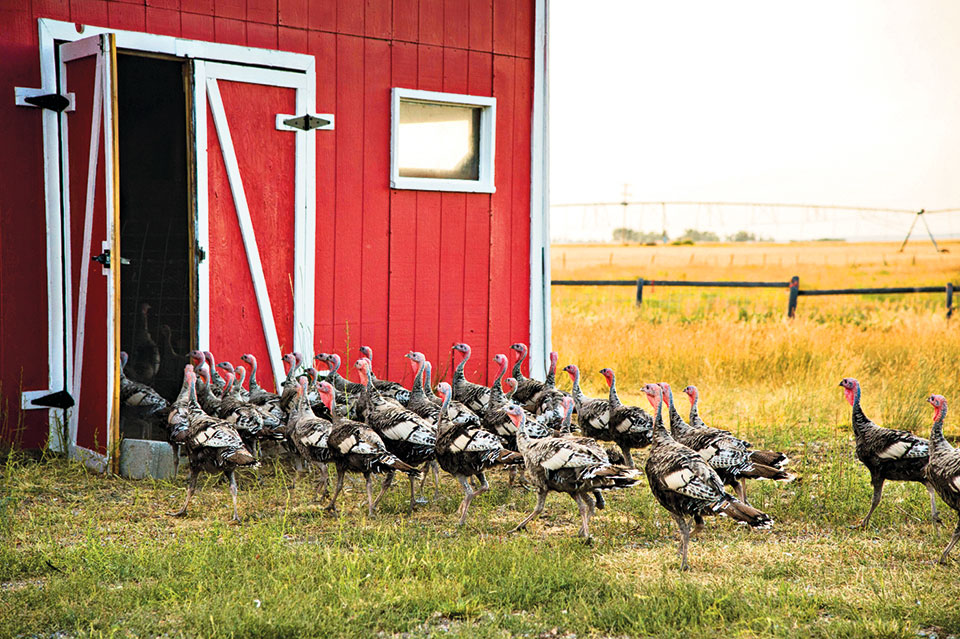 Fantastic Finishing
Turkeys raised for meat are likely to benefit from a final feeding phase known as “finishing,” when they are fed high-carb foods in an effort to fatten them up for harvest. As mentioned, a nice layer of fat under the skin is a key ingredient in a succulent roast. Since this finishing event is well timed with the fall fruit and vegetable harvesting chores, those of us living on a farm can take advantage of this period to get rid of all those rotten apples and second-rate tomatoes while offsetting feed costs.

If you don’t have such a surplus, consider giving the birds a separate ration of whole grain along with their principal feed. If you go with this approach, however, make sure you soak or, better yet, sprout the grain.

This step is necessary due to the relatively primitive digestive system of the birds, which is essentially just a bag with a few small rocks in it. Softening and even slightly fermenting the grain makes these rocks much more effective, allowing the birds to extract the full nutrition, further reducing feed costs.

Bird Housing
Young turkeys, or poults, are very fragile, even more so than young chickens. Where we might leave our chicks in a brooder for only one week, with poults we go at least two. The rule of thumb is to keep them there as long as the brooding space will accommodate their numbers and size. After this initial phase, we move our birds to a converted stock trailer parked in the field. The trailer has been amended with roosts.

We make sure that all drafts have been plugged as well as any holes a predator might use to gain access. In our area, we have the occasional weasel that can sneak through a very small space!

Since we prefer to raise our turkeys on open pasture, we need to train them to go back to the trailer at night. We do this when they are around six weeks of age by giving them a small enclosure (about 100 square feet) that they can use to go outside the trailer. The area is not big enough for them to get into any trouble or run off.

Every night we shut them back in the trailer, and after a week or two they learn the pattern and begin to think of the trailer as home. Should a predator like a hawk or coyote arrive on the scene, they are quick to retreat to the safety of the trailer. Their affinity for this “nest” also makes it easier to shut them in at night and move them around the property. On those occasions where the turkeys might resist going into the trailer at night, I have found that a pair of 8-foot bamboo sticks allows me to “funnel” them back home. We remove the smaller enclosure when they are eight weeks old, timing it with lowering the protein in their feed. At that point we also give them full free range (our pastures are fenced). 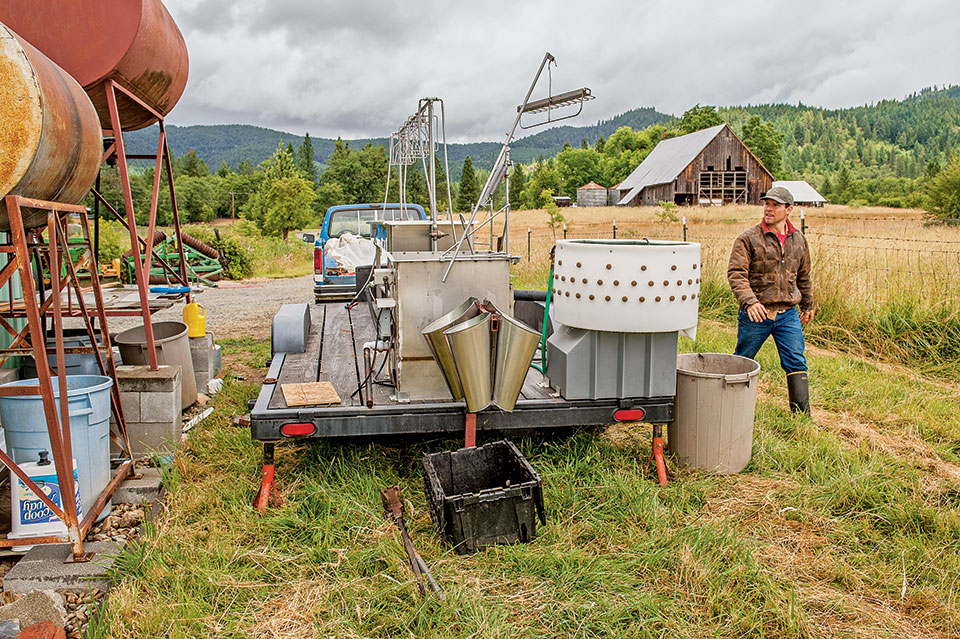 Nearly Free Range
Even domestic turkeys are natural foragers, able to get up to about 40 percent of their feed requirements from pasture. This nutrition comes in the form of grass, clover and other herbiage, and also insects such as grasshoppers. By allowing the birds more space to roam, you’ll lower your feed costs, fertilize your fields, and decrease the buildup of manure around their primary pen.

Since we use converted trailers to house the turkeys on our farm, rotating them from one field to another is easy. One of the problems with this approach, however, is the availability of water. Unless you are fortunate to have hose spigots everywhere, you are either going to be carrying a lot of water or running the water through a long hose. We initially tried the hose approach, but found, particularly late in the summer, that the water temperature was practically scalding—way too hot to encourage the poor thirsty birds to drink. We switched to white 0.75-inch poly hose, which can be found in most irrigation supply stores. Not only does the white color reflect most of the heat, but buying the hose in 500-foot lengths is much more cost effective.

The Pecking Order
Fighting will occur among toms, and this propensity increases with density. The basic pattern is that the toms scuffle a bit until one in a rafter is selected as the weakest. All the birds then gang up on that weak one, pecking its head and feathers until it slowly becomes even weaker. Without intervention, this pattern will quickly devolve into a miserable death for the weakest tom, and then the birds select the next weakest tom and so on.

I’m only a small rancher, raising perhaps 50 turkeys a year, so I don’t know how (or even if) large-scale ranchers deal with this problem. Our solution is to watch the rafter carefully and immediately quarantine any bird that becomes the brunt of persistent bullying. Oddly enough, you can expect the bird to show clear signs of emotional distress while separated from the others. Even still, it’s important to keep the bird from further abuse until it properly heals. If it seems like healing will take a long time, you can try giving it a companion of the opposite gender.

To my mind, slaughtering turkeys is the most difficult aspect of raising them and deserves an article all to itself. In a future issue of The New Pioneer I will discuss how we adapted European methods at our farm and built a mobile processing unit. 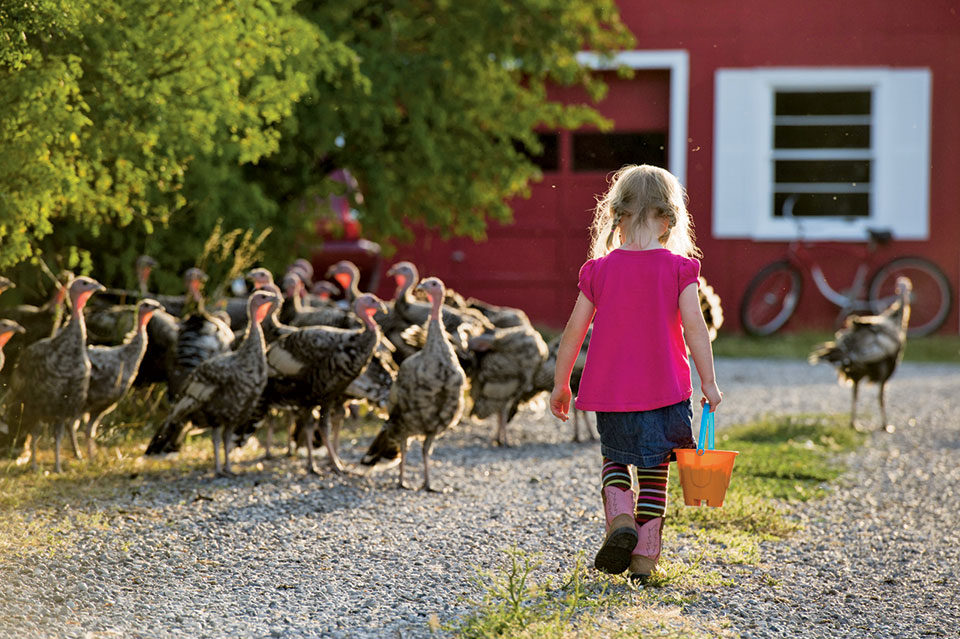 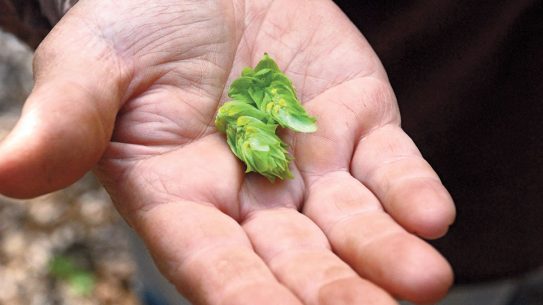 A bittersweet way to have fun, make a little money and improve your home...