We drift down the bayou slicing through an early morning haze with the sound of a screaming regret in the distance. This is south Louisiana, known as alligator country. The rich marsh, swamps and bayous are ideal feeding and breeding grounds for the ravenous reptiles. I’m riding shotgun in a 20-foot skiff with Francis Motichek, a 25-year veteran alligator and nuisance control hunter, and we’re ready to catch a boatload of bayou alligators.

The alligator season runs from the end of August to the end of September, a time when the Louisiana heat is thick with humidity and the swamps are ripe with snakes and mosquitoes. Besides the oppressive heat, it’s also hurricane season.

The Early Days
Francis has never ventured far from the Louisiana bayous. Growing up in southeast Louisiana, in the small town of Madisonville, he trailed the piney woods and waterways, Bayou DeZaire, the Tchefuncte River and nearby Lake Pontchartrain. As a young boy he made forts in the woods, and pitched tents along the shoreline while fishing and crabbing. Soon he began duck hunting, walking miles in the marshy waters to find the best spots.

When he started gator hunting, he began taking time off from his management position with a local exterminating company each year during hunting season. Francis and his helper, Bo (Timothy) Blackwell, mainly hunt the Pearl River Wildlife Management Area and try to finish in 10 days.
They set the lines the day before they hunt and hit the water at daybreak. A 50- to 60-foot line is staked to a cane pole on the bank and baited with chicken leg quarters and a shark-like hook. At night the gators reach up and swallow the bait.

Getting Hooked
The goal is to hook the alligator in the stomach. If the hook catches in the mouth, the gator can yank it free by wrapping the line around a tree stump or fighting with the hunter in what’s called a roll.

“If they swallow a hook, alligators won’t fight because they know it will rip out part of their stomach,” Francis explained, adding that big alligators don’t get big by doing dumb things. “I killed a 12-footer—he was wrapped up short around a stump. I had to lift him up with a hoist, and he began to get free, but I killed him just in time.”

On the show Swamp People Francis believes that everything is taken to extremes. Harvesting and moving the alligator into the boat requires the utmost attention, but nothing like the fighting shown in the television series.
Six to 9-foot alligators are usually hauled in the boat using a helper; anything bigger requires a winch. And Francis uses a standard .22 rifle rather than a pistol or heavy-duty shotgun used by the hunters on TV.

“You lift the line slowly and shoot the alligator in a specific spot in the back of the head where the spine meets the brain,” Francis said. “Don’t get me wrong, there’s an element of danger. You have an animal on the end of a line that is capable of killing you, and if you get down in the water while he is thrashing about, he could hurt you. I preach to my helper all the time that you have to pay attention to every detail, you have to be very careful.” 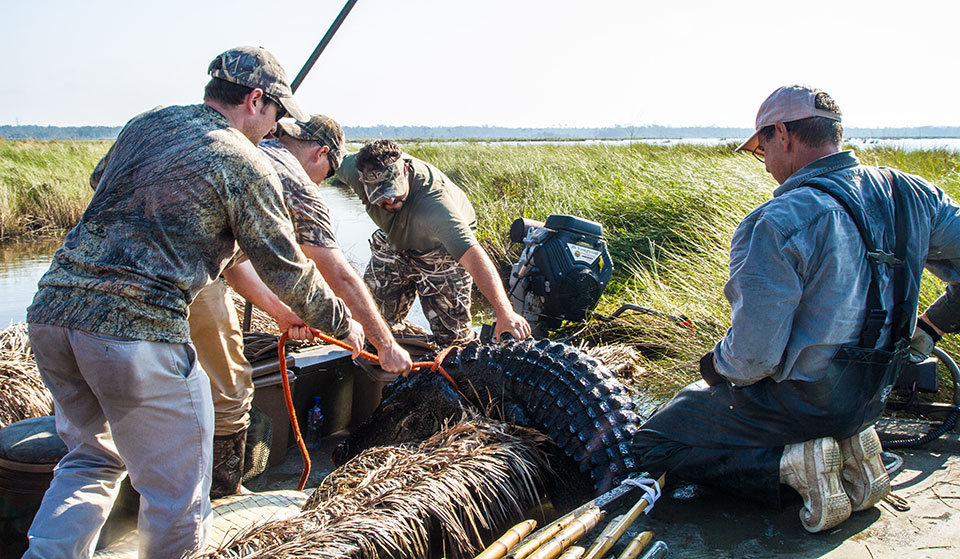 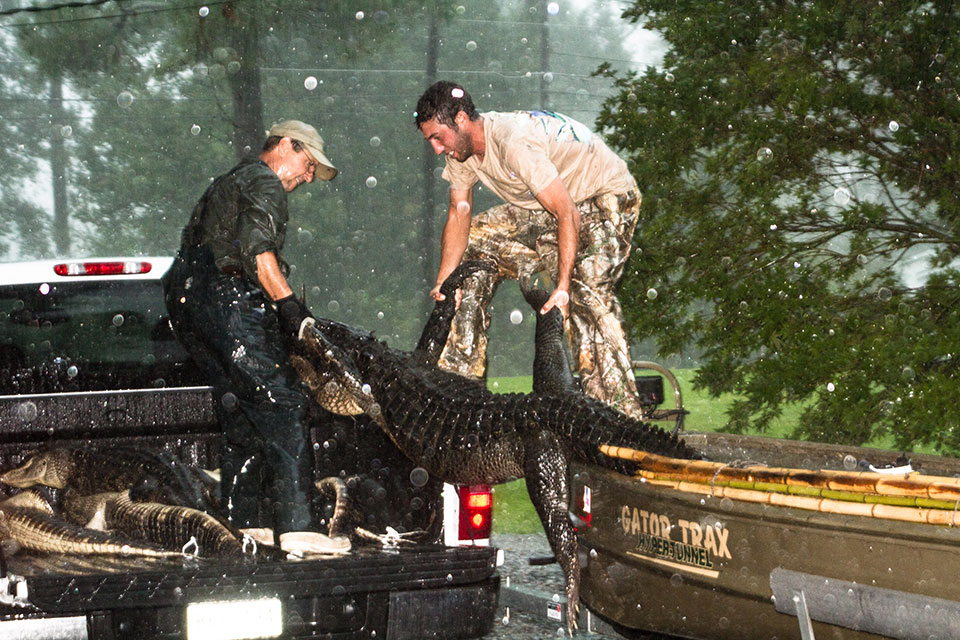 Harvest Time
The number of tags Francis receives from the LDWF varies from year to year. On average, he fills a 150-tag allotment and, on any given day, hauls 15 to 20 gators in a 20-foot skiff. The Pearl River Wildlife Sanctuary holds three estuaries including swamp, marsh and intermediate wetlands. It’s perfect habitat for alligators, yielding 25 to 30 a day.

After an alligator is harvested and tagged, Francis throws it in his pickup truck and brings it to a processing plant in Springfield, Louisiana. The plant pays Francis the going fee. Depending on size, the price ranged from $4 to $35 a foot over the last five years. Today it goes from $6 per foot for 4- and 5-footers to $35 per foot for gators 9-feet and longer.

By harvesting the designated number of wild alligators each year, the reptiles stay a reasonable size. That’s important since the larger ones monopolize the area and prey on other alligators. Most gators average 7.5 feet; 12-foot gators are rare because of the harvest program—maybe half of 1 percent of the overall catch. 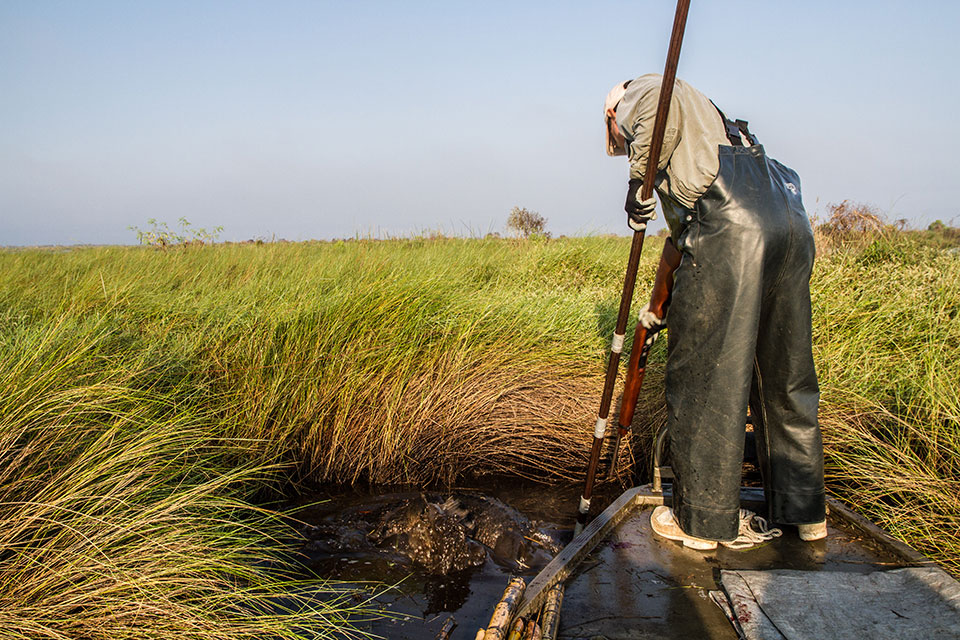 Sport Hunting
In Louisiana, a nonresident can only hunt alligators as a sport while accompanied by a guide. Francis saves some of his tags for sport hunters, who usually come from the Midwest for trophy catches. They usually get 20 to 25 alligators in one day, and if they decide to keep the alligator, they pay a trophy fee. Taxidermy services are also available and normally done during their stay.

Sometimes the alligator gets tangled on land with the line, and the hunter must find and kill it. Francis shared one of his experiences when he went looking for a hooked 8-footer during one of his sporting hunts.

“I was walking in water up to my knees and got to where the gator was, and the alligator came straight at me, but all he wanted was to get back to the river,” he explained. “I’m running back to the boat, and he’s swimming and bumping into me, racing to the water. He’s not interested in biting me, just in getting back to the river.”

Nuisance Control
In the spring of 2012 Francis had an increased number of nuisance calls, 25 just in that season. The nuisance program allows alligators 6 feet and under to be relocated, while the larger gators are killed and harvested. Francis lures the smaller gators with a special grunting call and places a wire noose around the head and tapes the mouth.

He prefers to capture the reptiles at night because there are fewer people and distractions. Besides the added element of danger, sometimes there’s disagreement among the residents about removing the alligators. Some residents get attached to an animal after feeding it or consider it a natural part of the landscape and don’t want it removed.

On a nuisance call inside a golf course subdivision in southeastern Louisiana, Francis received his one and only alligator bite from a 6-footer. “It was at night. I noosed the alligator and was talking to the complainant,” he said. “I went to hold the jaws together to tape the mouth and stuck my hand right in its mouth.”
Dominant gators force smaller ones to new feeding areas. Many of them find themselves in retention ponds due to the influx of new developments. “That’s where I’m catching the majority of the (nuisance) alligators,” he said. “They are eating ducks and Canadian geese. People get upset about that, and want them removed.”

Bayou Homestead
As a child, Francis did his share of chores tending the family strawberry farm, and today his own garden yields hearty crops of eggplant, tomatoes and bell peppers, while the 30-year-Satsuma orange trees produce enough fruit for a roadside stand.

“We have always sold things off the land,” Francis said. He and his wife, Jobette, usually sell hundreds of pounds of Satsumas each year, but one year they had a bumper crop. “We sold every Satsuma, probably 3,000 pounds. I couldn’t cut them quickly enough.”

It’s not by accident that their Satsuma trees have been so generous, since the Moticheks take good care of them. “They are very sensitive to 20-degree temperatures,” Francis explained. “I can’t tell you how many times we’ve been out here at dark trying to cover the trees with big pieces of Visqueen.”

Peeler Crabs
Inside a screened workshop is another Motichek endeavor, a 20-foot-long, oxygenated aquarium filled with peeler crabs. With a flick of the light, they scurry across the tank, backpeddling with claws in full alert. Peeler crabs are hard-shell blue crabs that show signs of shedding. They shed their hard shells, leaving a softshell crab, a delicacy across the South. Fried or broiled, the entire crab, including legs, claws and body, is served on platters with French bread or smothered in sauces and gravies.

For more than 20 years, Francis and his wife ran the traps in Lake Pontchartrain, separating the hard crabs from the peelers, saving the hard ones for crab boils. “After work we would take the dog and go out for an hour and half and run the traps,” he said. Today, he buys the peeler crabs from fisherman and puts them in the tank, then waits for them to molt.

The tank system was developed by LSU. The molted shells are used to filter the tank. and bacteria eat the waste matter. “It’s great because you can walk out of your door and tend to the softshell crabs,” Francis said. “Before that you had to work with outdoor crab areas.”

A real frontiersman and keen businessman, Francis reaps the bounty of Louisiana’s wildlife, mild climate and rich alluvial soil. He enjoys meeting new people and helping them resolve their problems. The pest control job and work as a nuisance control officer fulfill that need. “If I can do something that I enjoy and make money, that’s the best life you can have, the best thing in the world.”

Surging Swamp Tourism
The general public can experience the same flora and fauna witnessed by alligator hunters on local swamp tours. Visitors board a pontoon boat and travel inside the swamp’s cypress forests. Native tour guides call the alligators from the wild and educate visitors on their habitat. The swamp is also home to waterfowl, bald eagles and migrating songbirds. Bring your binoculars and camera for breathtaking scenery and wildlife. 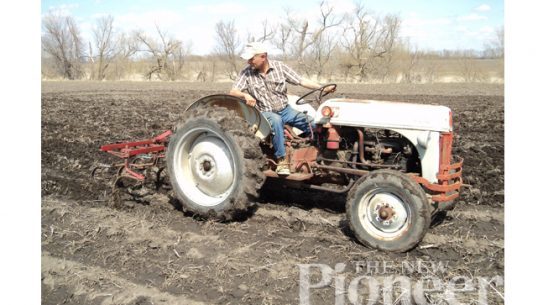 Get your rows cultivated right with this savvy ground-breaking info for farms in the...