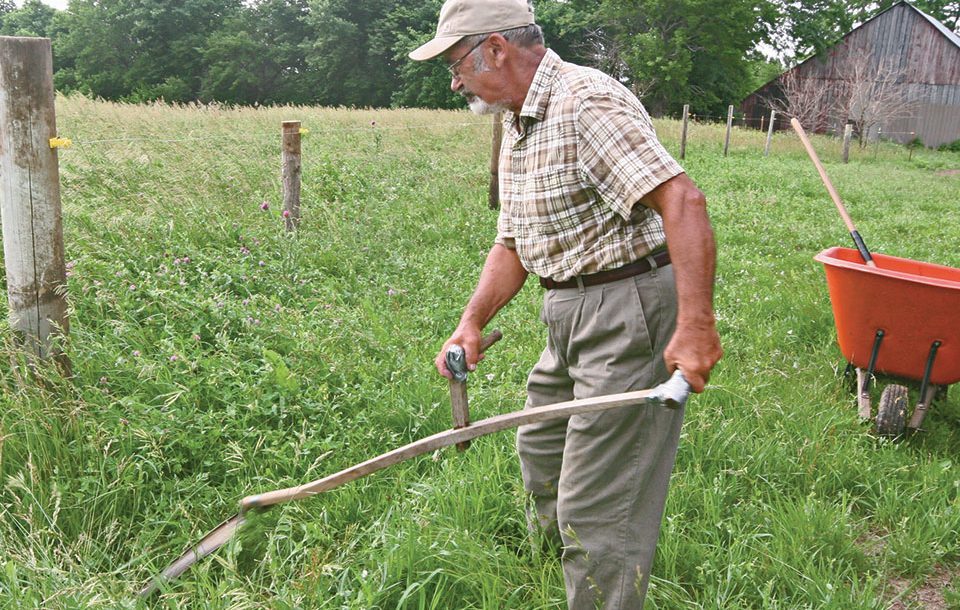 Klaus Karbaumer glided his scythe over a semicircle of meadow and made a pleasant crunching sound with every swing of the ancient tool.

“See how close to the ground I’m mowing?” he asked. “You see that I do not chop and flail my scythe around. I swing it through the air parallel with the ground.”

Klaus could speak as he mowed because scything, when done properly, does not leave the mower breathless or exhausted. And he didn’t have to raise his voice over the noise of a weed whacker.

Back To Basics
More people like Klaus are discovering, or at least rediscovering, the practicality and usefulness of the so-called Grim Reaper tool, especially for small farms. Even some homeowners are putting away their weed whackers and picking up a scythe instead. It uses no gas, doesn’t burn out, and it’s good at cutting tall grasses and weeds. Not to mention, it’s good exercise.

Amy Wilson, who owns the Marugg Company with her husband, one of the major suppliers of scythes and related tools, said that the 140-year-old Tracy, Tennessee, company has seen sales increases of 15 to 30 percent per year over the last 10 years. “We get many customers who just want to go back to the basics and want basic tools. From 2006 to today, it’s just been a huge increase in orders,” she said. She attributed part of that to the internet, which she described as ironic because it’s new technology helping to revive old technology. But Wilson said the company also sells in metropolitan areas, like New York City and Los Angeles, where the customers are suburban homeowners or members of community gardens.

“Some just want the exercise, but we also had a boost in sales when gas prices went up.”

Muscle Power
Every morning, while the dew still hangs on the grass, Klaus scythes just enough to feed his four draft horses for the day. It would not be practical or cost effective to drag out a big tractor to cut a small area, even if he had a tractor on his farm.

When using the scythe, Klaus holds its top handle with the left hand and the central one with the right. The curved blade is kept close to the ground and parallel to it. He twists his body from right to left, letting his thighs do most of the work. He does not hack at the grass, a common error among beginners, but gently slices the grass close to the ground.

“What you do is keep the blade low in a kind of semicircle because the real force of mowing is applied from the edge to about the middle of the blade,” he said. “There’s a technique to that, but once you learn how to do it, it becomes natural.”

Learning how to do it usually requires instruction from an expert. Klaus himself has taught the proper techniques and care of scythes at workshops on his farm. More such workshops are being held throughout the country as more people discover the benefits of scything.

Coaches at these workshops can help would-be scythe mowers choose the right-size blade and snath, the long wooden handle, for their height. Using the wrong size blade or wrong length snath can exhaust the user quickly. A short person should, for example, use a scythe with a shorter snath, and the snath should be ergonomically designed for maximum comfort. There are different blades for different tasks. Blades for tight areas, say around trees or bushes, should be shorter, 16 to 20 inches, than those used for open meadows, which should be 24 to 36 inches. Such factors are important if one is to be successful in mowing with a scythe. 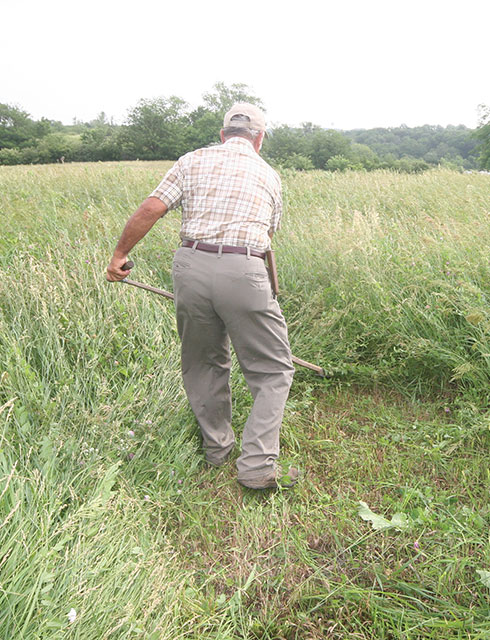 An Ancient Tool
The scythe has been around since 500 BC, in the days of the Roman Empire. Its use spread to Europe in the 12th and 13th centuries. Before then, farmers used sickles for reaping crops. (Note: It became known as the Grim Reaper tool because death was personified in England by a hooded figure who harvested souls using a scythe.)
The scythe allowed the mower to stand upright, making the job faster and easier on the back.

In America, scythes were used for a relatively brief period, but the American blade was much heavier than the European variety, and the snath design required a user to bend as he or she mowed. It was backbreaking work and hard on the knees. No wonder, then, that the American-style scythe was replaced by horse-drawn mowers and, later, power equipment.

Scythes are still popular in devel- oping countries where farms tend to be small. Most scythe users prefer the European-style, hand-forged scythe blades made by an Austrian company that has been in operation since 1540.

Still, scything is not practical for all farm operations. Klaus said he can scythe-mow 1.5 acres in a day. Pulling a mower by horse could cover about 8 acres. A tractor can easily cut 50 acres in a day. But for small areas, a scythe is a practical alternative to bulky tractors, particularly for those new pioneers who are mindful of their impact on the environment and want to move away from gas-powered tools and return to handheld ones. 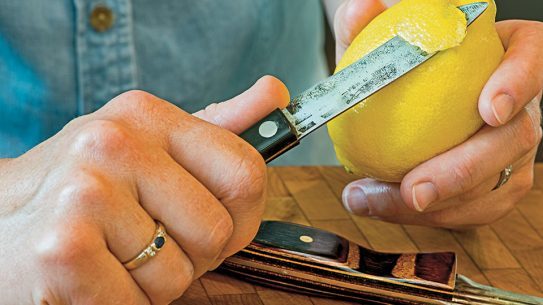 Learn how to breathe new life into a vintage Old Hickory knife and put...