1 of 6
Harvesting
When Tucker harvests lettuce, he can kneel in the 2-foot aisles between his raised beds without disturbing the plants. 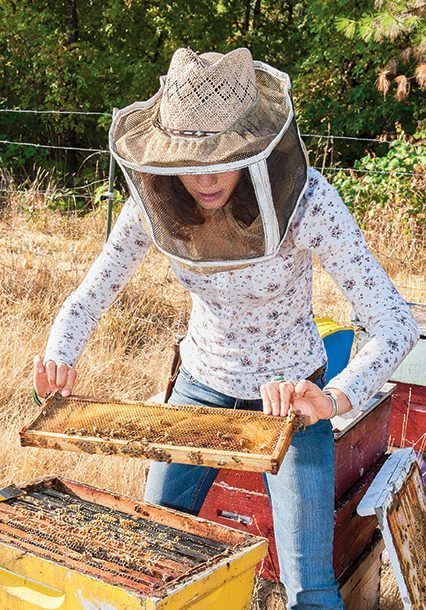 2 of 6
Bee Work
Arianna working with her bees. They don’t bother her, but she recommends that people wear protective clothing. 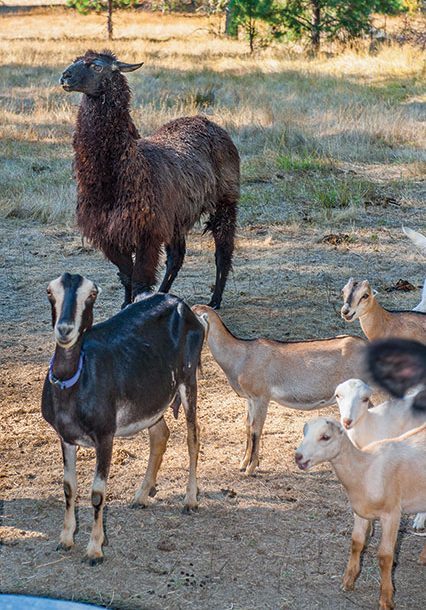 3 of 6
Llama Protection
Coco, a llama, does a good job protecting goats in the pasture. 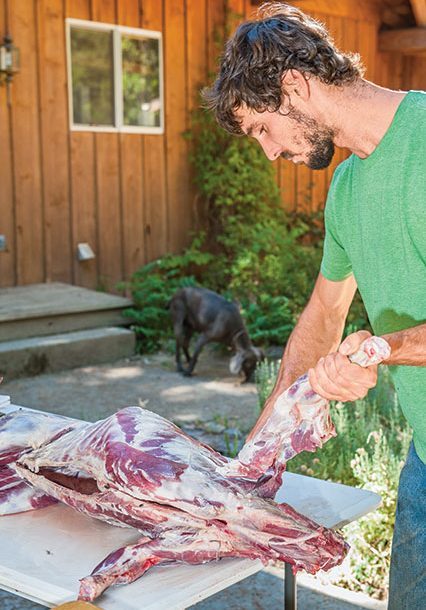 4 of 6
Butchering
While Tucker butchers the wedding goat, Lola enjoys some scraps. 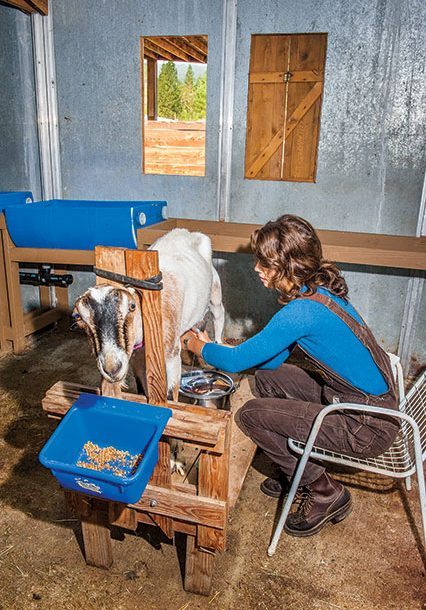 5 of 6
Milking
Arianna milks Heidi, a LaMancha. She has taken cheese making classes and wants to learn charcuterie. 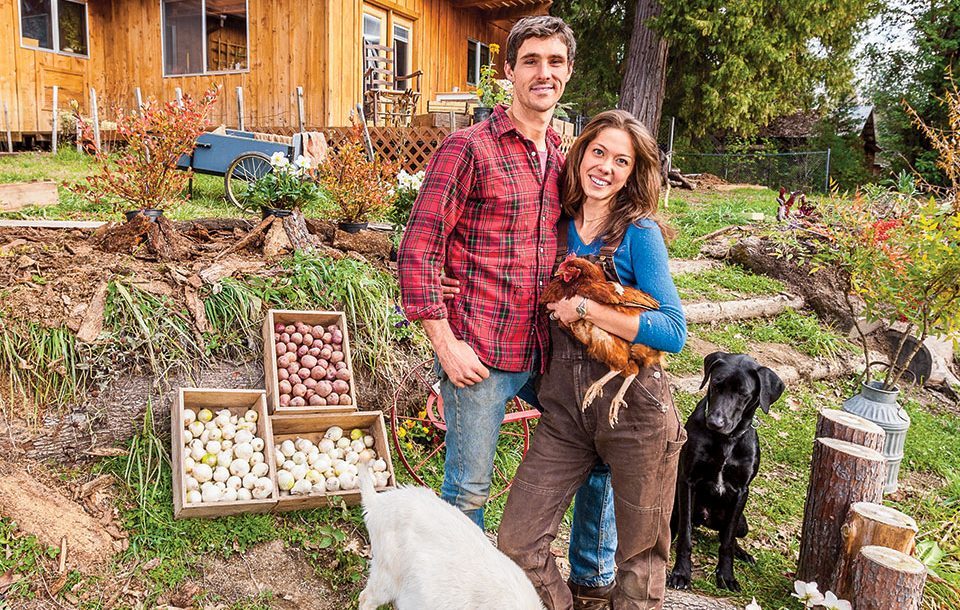 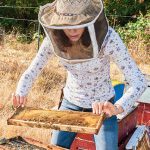 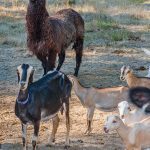 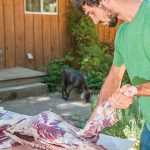 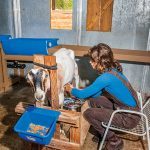 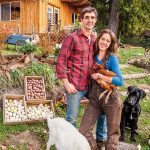 Arianna and Tucker Pyne shared the same dream, but until their first date had no idea they would pursue it together. “My pickup hit a deer and killed it,” explained Tucker. “When that happened, I thought to myself, this is a make-or-break moment. Arianna’s answer made it a make-it moment: ‘Let’s skin and butcher it. We can do it at my mother’s.’ So we drove there and Arianna introduced me.” “‘Dr. Chrétien,’ I said, ‘you have a lovely daughter and I have a dead deer in the back of my truck. We’d like to dress it out here if that’s OK,” Tucker continued. ‘‘That’s fine,’ she replied, ‘but we’re going to the movies.’”

“Later, my mother told me she knew then that Tucker was the man for me,” added Arianna. “She was used to me.”

Bluegrass And Climbing
Soulmates they are, but their interest in homesteading, self-reliance and farming developed in very different ways. Arianna has been skinning and hunting since she was a young teen. Until she was eight she lived in Italy, near Florence. Then her family moved to the United States, settling in Santa Rosa, California. In high school and college she fell for bluegrass music, which sparked an interest in farming. A college friend gave her a copy of Backwoods Home magazine and she was hooked. “I devoured it and subscribed,” Arianna said. “I was inspired by the idea that I could take care of myself and be self-reliant. I knew then I wanted to homestead and farm and started trying to learn all I could.”

Tucker, on the other hand, grew up in a suburb south of San Francisco, a foreigner to farming. He also loved the outdoors, but that meant riding his bike, playing team sports and climbing trees. At the University of Colorado in Boulder, he was a communications and philosophy major and took up backpacking and rock climbing. When he became an intern at a local company for college credits, he found out what he did not want to do.

“I believed in what the company was doing—helping other businesses generate income by going green, but there was no way I could sit at a desk for eight hours. I dreaded going in to work. The office was near a state park in Boulder that has world-class rock climbing. I was a climber and wanted to be outdoors rock climbing, or in the mountains snowboarding or backpacking recreationally.” After college he decided to go around the world, hoping to find something he really wanted to do. But after 10 months he hadn’t found his calling and came back to the States, stopping to see family in New Jersey. There, he bought a 1980 Suzuki motorcycle and decided to ride back to San Francisco.

An “Aha” Moment
On the internet he saw an ad asking for help on a small farm in Virginia. “I called the owner and got the job. That was the experience I had been waiting for. Everything clicked—we did a little bit of everything. Nick was a homesteader in a tiny Appalachian town called Narrows. He was the first person I ever met whose attitude was, ‘We can fix it, we can do it ourselves.’ It seems today that many people think the only solution is to call an expert. He showed me that there’s always a way to innovate and figure something out. Sometimes it takes getting to the point where you’re stuck that forces you to innovate and create a stellar solution.” Tucker came back to the Bay Area knowing that he wanted to home- stead. “I was clear on what I wanted to do and had an idea of skills I needed to develop, which included wood-working, building and farming.” He bought an Alaskan chainsaw mill and visited lumberyards to get old logs, which allowed him to mill his own lumber. He started building furniture and reading a lot. “My parents were very supportive. My mother let me turn the backyard into one large vegetable garden.”

The Dream Farm
He began looking for affordable land, never thinking he would find it quickly. In 2011 he saw an ad for a place in Oregon. The price was right and he drove up with his brother to look at it. “I knew what I wanted a mountain farm, something with privacy and lots of trees, a good mix of hardwood and softwoods, an area for pasture so I could raise livestock, and enough land suitable for a garden. When we drove down the driveway I said to Nick, ‘This is where I’m going to live.’” With help from his family, Tucker figured out how to buy the 82-acre parcel, moved in and went to work. He’d been on the farm for two years when he met Arianna in December of 2012. She began coming to help him each weekend, driving north from college. She took to the farming life as Tucker knew she would, and on September 14, 2013, they married in a field near their home with friends, family and dogs in attendance. The wedding dinner featured a lamb and goat they had butchered and music from a local bluegrass band. Today, the couple sell their organic produce at local farmers markets, milk LaMancha goats for milk and cheese, raise Boer goats for meat, Black Angus cattle for beef, and chickens for meat and eggs. They also have bees. Developing hugelkultur terraces behind their house is an ongoing project. From trees on the land, Tucker has made furniture and built fencing.

Black Dog’s Timeline
This year (the third) Tucker thinks the farm will have more money coming in than going out.
“I don’t think growing vegetables will make us rich, and it won’t be able to pay for the lifestyle we want with a family, but it can give us more time to focus on what we really want to do, which is to teach traditional homesteading skills, hold workshops and possibly provide a daycare setting where children can learn what farming is all about. We don’t want to be agri-tourism; we want to be agri-education.” Along with market gardening, they are experimenting with other crops to see which do well on their site. They are aiming for a closed-loop system, meaning that the manure and com- post from their fields go into their raised beds, the animals eat forage and grass from the fields, and horses provide the power. But their horsepower still comes from engines.

Farmstead Challenges
The Pynes call their operation Black Dog Farmstead because it’s both a farm and a homestead. (“Black Dog” refers to Max, part German Shepherd, part Great Dane). Figuring out how to make homesteading and farming as a business work together has been difficult. Both are really full-time, some- times contradictory jobs. Arianna summed up the challenge when talking about how hard it is to harvest produce, ready it for market, go to market and then come home and preserve food for the pantry. “It takes so much time and there is so much to do on the farming end.” Homesteading is about being self- reliant, preserving the meat and produce you raise, making or building what you need from materials on your land, and being energy independent. Commercial farming is about raising food for profit in the most efficient way possible, and if you choose to be organic, as the Pynes have, that is not an easy task. “If we took all the time that we spend on raising veggies and chick- ens, milking our goats, and our build- ing projects on the farm and put it into commercial enterprises—growing crops or raising laying hens on a larger scale—we would be making more money, but we are also building a home. To us, that is more important,” said Tucker.

They like the challenge of doing both. “One of the things I love about farming is being able to integrate my family and home with my passion for being outside,” added Tucker. “I like that I’m actually building something, creating something, not just using the land recreationally.” As we left he said. “I just hope you can come back in five years and see what we’ve accomplished.”

This article was originally published in THE NEW PIONEER #182 Summer 2014 magazine. Print and Digital Subscriptions are available here. 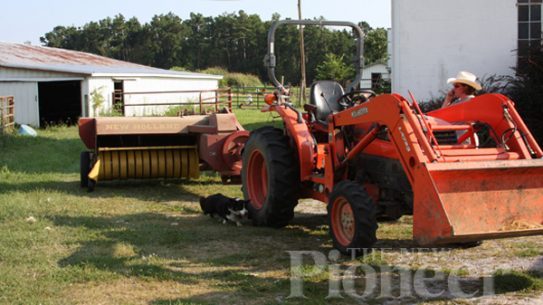 Haymaking For Green! Hayfield of Dreams

How to turn that big, sustainable pasture of yours into a hayfield of dreams...