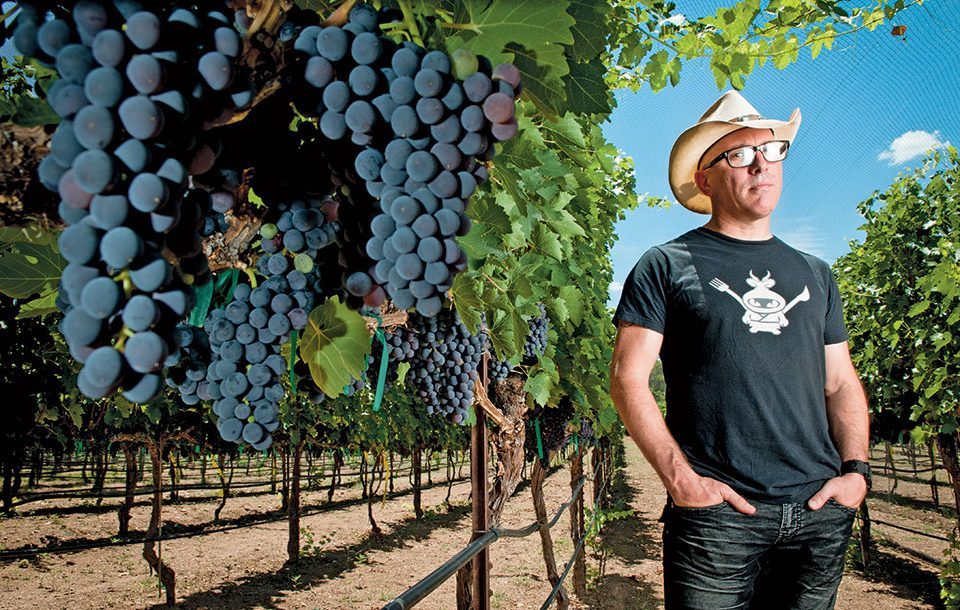 To many, leaving the rat race for the idyllic country life of a vineyard is a well-worn, but vividly painted, notion. Dreamers see sunsets with dinners at outdoor tables next to trellises of fruit-bearing vines, and it all seems so peaceful and fulfilling. The sun rises the next morning over the foggy rolling hills, and the romantic notion begins anew.

What a focused lens and a closer inspection will show, however, is a constant battle against fungus, insects, weather and toothy critters. But for a growing number of intrepid growers, the arid hills and crags of Northern Arizona are part of a winemaking life they wouldn’t live without, and one of their pioneers is Maynard James Keenan, a multiple-Grammy-award-winning rock star and frontman of the bands Tool and A Perfect Circle, known also for his screams, mohawks and on-stage body paint.

Rocker & Vinter:
So how—and more importantly why—does a rock star at the top of his game mold a large part of his life around winemaking? “The process started in the mid-90s,” said Keenan. “Winemaking is part of my survival mindset. I think too many people have lost the ability to find food and water, but I don’t think ‘living off the grid’ is truly practicable. Pardon the pun but ‘it takes a village to sustain a village.’

“There are rural communities around the world that are comfortably able to support themselves when they are focused around a single sustainable industry—wine, olive oil, wool, etc. Each person or family plays a role and sustains an element of the whole. Each contributes and trades his specialty with others. As a result, the diversely supplied community thrives. This isn’t a utopian concept; on the contrary, each group perfects its respective element and trades upon its relative value.

“My contribution is wine. One of the first things Noah did after the flood was to plant grapes. The grapes gave the people a naturally purified water source through fermentation, and food. In our modern application, they serve much of the same purpose. Here in Northern Arizona, we now have dozens of vineyards and a winemaking study program underway at our local community college.” 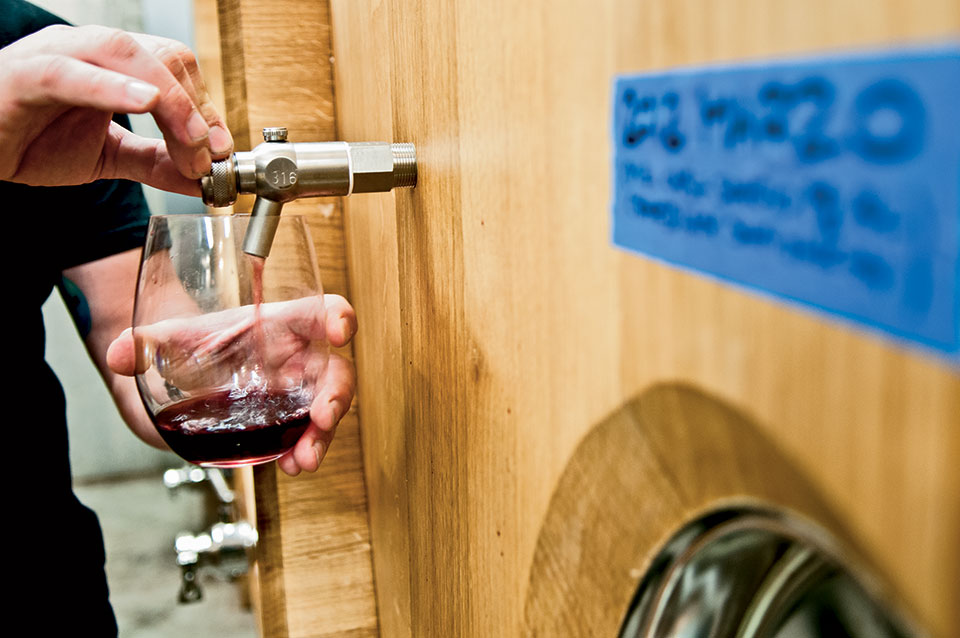 Valley Reborn
The Verde Valley of Northern Arizona has a history of booms, busts, fires, fights and strikes. Jerome, home to Keenan’s Caduceus Cellars, was once referred to as “the wickedest city in the West.” Burned to the ground twice, Jerome was a rip-roaring center of alcohol, prostitution and labor unions. After the copper mine deposits were exhausted in the early 1950s, the population, once over 10,000, dwindled to fewer than 100. Revived gradually by residents as an historic tourist and arts destination a decade later, Jerome is also home to the Grand Hotel. A former five-story hospital cut into Cleopatra Hill, it overlooks the town from its 5,240-foot elevation. Originally built in 1926, it was the scene of a number of suspicious deaths, suicides and the first Otis self-service elevator.

The Verde Valley continued to reinvent itself in the early 1990s. When Keenan arrived, there were two small winegrowers and an expanse of rocky hillsides. While Southern Arizona has a notable agro-industrial grape-growing footprint, the last major vineyard in the elevations of the north was a 72-acre operation near Sedona closed during Prohibition. In 2006, the pace of change quickened. A solid lobbying effort resulted in the passage of a state law permitting and taxing tasting room and direct wine sales. Permits were issued, and the number of winemakers grew from 10 to today’s 84.

Unlike California and Washington—with large expanses of land and vertically integrated operations—Verde Valley growers are a collection of small-business owners. The terrain and geology restrict growing to small vineyards that can be cultivated and tended in a unique way. Yavapai College Director of Viticulture Nikki Check described the conditions. “There are many little 2- to 4-acre plantings here. But because of the environment and soil conditions, we produce a nice, Mineral-rich, Old World wine, unlike the more fruity varietals in California.” The journey from the vine to glass requires an artful combination of planning, nurturing, science—and luck!

For Keenan, the winemaking wasn’t his first thought when he came to the area. “It all began when I tasted an apricot that grew on the rocky, volcanic hillside near my house. It wasn’t a big apricot. In fact, it was small, but it was intense and saturated with flavor. It was just begging to be picked and eaten and have the seed planted somewhere nearby. The aroma of the apricot, along with the intensity of aromas from the herbs we planted nearby, were so strong you could smell them half a mile up the road. Things want to survive in the desert, and it’s inspiring.”

But it wasn’t until he was enjoying a glass of wine and looking across the hillsides behind his home one evening that he made the connection. “Much of the terrain here looks like the wineproducing regions I have visited in Portugal, Spain and Italy. We have the same daily temperature swings (sometimes over 30 degrees in a day) and volcanic soil. I didn’t begin this vineyard as a business—it was simply something I wanted to do. I had no other evidence than the similarity of Northern Arizona to other parts of the world. I just intuitively felt it would fly.”

Keenan took the community concept one step further in 2009 by opening a wine-tasting room in downtown Jerome. Named for his label, Caduceus Cellars, the renovated Old West saloon features his wines, a tasting bar and locally produced gourmet items. 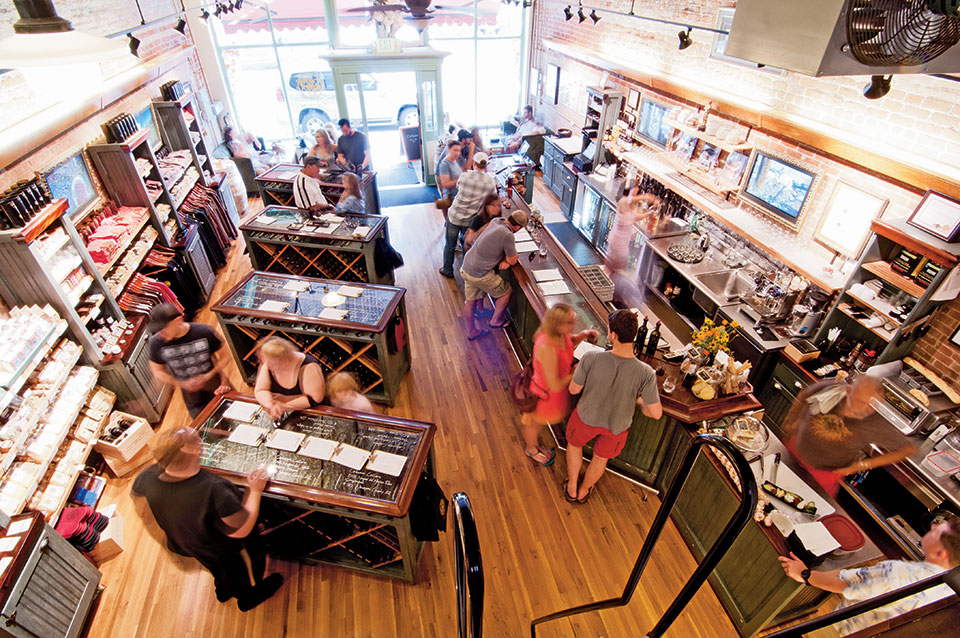 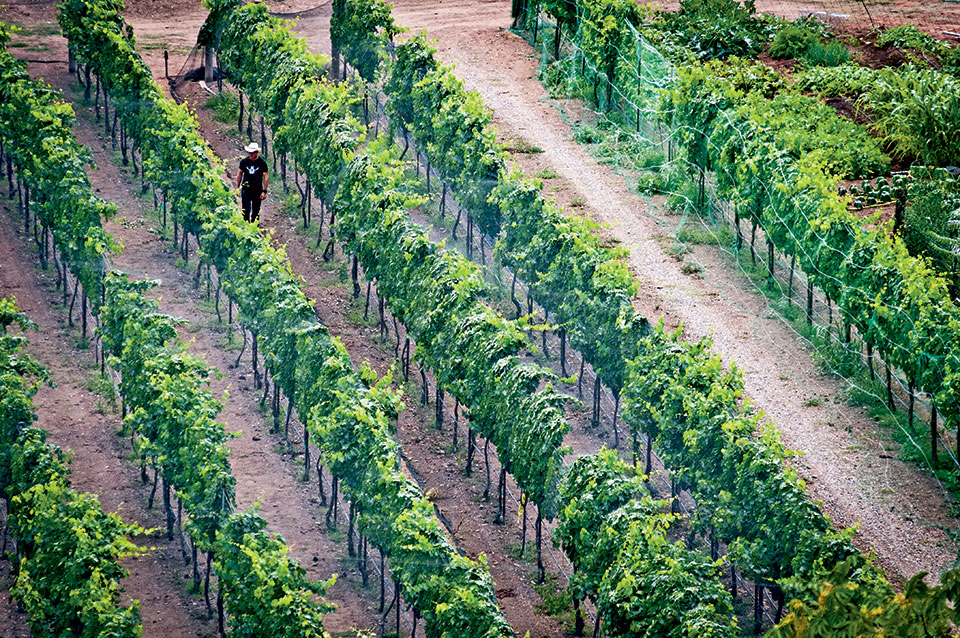 Grape Grower Or Winemaker?
There is an important distinction between grape farming (viticulture) and winemaking (enology). Viticulture is conducted in the fi eld, while enology is perfected in climate-controlled spaces fi lled with stainless steel fermenting tanks and oak casks.

“It takes a great deal of talent and expertise to do both things well,” commented Check. “Most beginning in the wine industry choose one or the other initially.”

For those who want to build a label and sell wine, grapes can be purchased from growers to be fermented and blended. Most vineyards produce around 3 tons of grapes per acre, selling from $800 to $2,500 a ton, although a ton can bring as much as $25,000; the price depends on the variety of grape, quality of the fruit and prevailing market conditions. It takes about 2.5 pounds of grapes to make a bottle of wine, but a high-quality bottle of wine can sell for $15 to as much as $500, in some circumstances more.

Check recommends that beginning growers try to start with 10 acres. Though many smaller operations exist, the start-up costs are such that planting on a scale that can ultimately cover the costs of the start-up investment increases long-term viability. Plantings must mature to produce grapes, and it may take several seasons before the vines bear useable fruit.

Growing Further
The Verde Valley’s hills are not limited to wine grapes. Keenan also maintains a small orchard and greenhouse that produce fruit, vegetables, and herbs for his home and dishes served at his wine tasting room. “The orchard was first. It’s evidence of survivability, and the intensity of the fruit inspired additional cultivation and experimentation.” 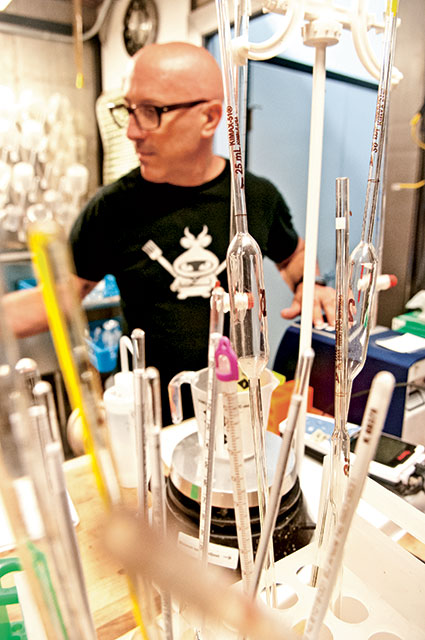 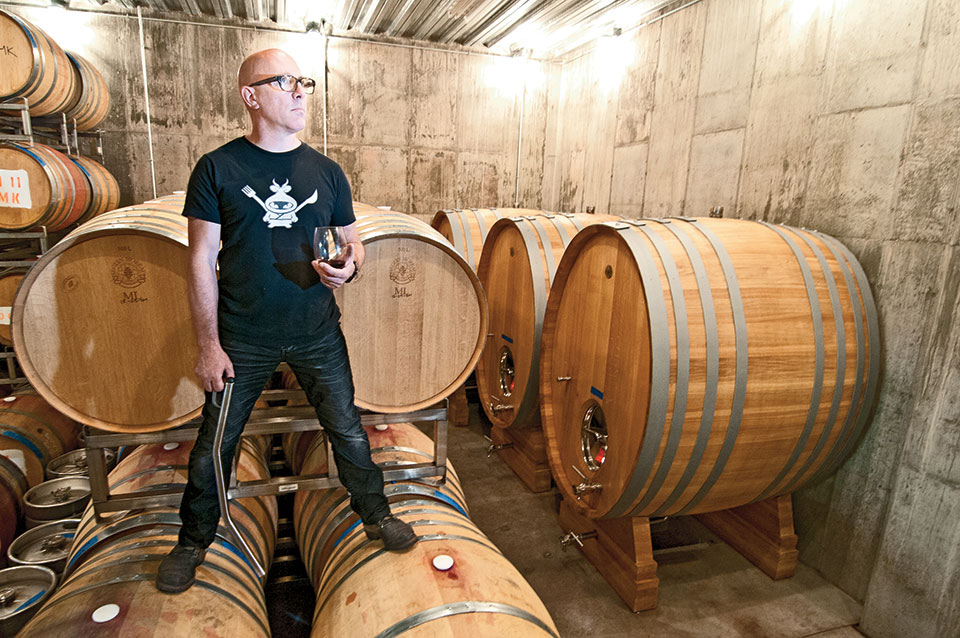 Keenan’s orchard includes apples, apricots, figs, plums, pomegranates and peaches. He also cultivates Roma tomatoes, peppers (both hot and not), as well as basil, tarragon and thyme. The orchard isn’t simply a source of fresh food, but it’s also a complement to the vineyard and a barometer of sorts for changes within the seasons.

“As a survivalist, I realize that varying weather patterns from year to year will have differing impacts on the various fruits and vegetables. For example, an early frost might damage our plums but help the apples. The diversity of plantings here provides a hedge against weather changes and limited harvests.”

So what is the future of the Northern Arizona wine industry? “The visitors and pioneers made this effort successful,” said Check. “At Yavapai College, we recently planted a 15-acre vineyard and just opened a 3,000-square-foot, student-run winery that will feature over 17 varietals. Our aim is for the program to be a hub of information for growers throughout the region. We have learned so much about what grows best and what conditions and soil types will produce the best wine. Consistent quality from our growers and healthy competition is a benefit to everyone in the area as Northern Arizona wines expand both as a brand and a destination for wine aficionados to visit.”

For Keenan, it’s all about Arizona. “Our long-term goal is to produce all of the grapes for our wines here. We want to keep the footprint small and the business sustainable. We have used fruit [grapes] from the southern part of the state and New Mexico, because our winery has the capacity. Soon, the entire production will be exclusively from our regional grapes. By 2015, we should be there.”

Visit caduceus.org to learn more about Caduceus Cellars and Merkin Vineyards, and go to viticulture.yc.edu. for information about viticulture and enology in Arizona. 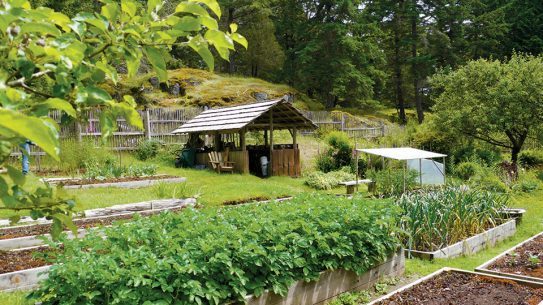 Bargain land comes at a price, but if you're willing to spend some sweat...