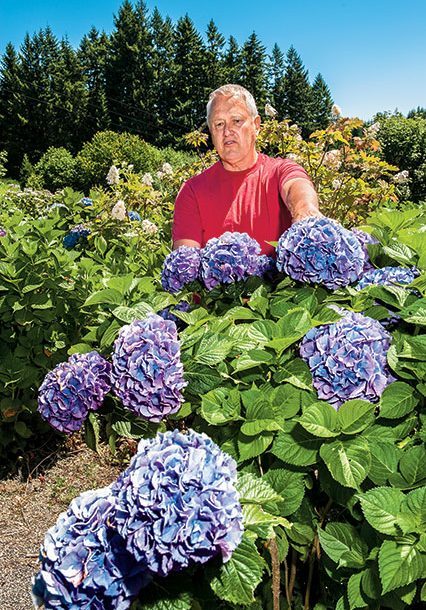 When you amble the gardens at Joy Creek Nursery in Scapoose, Oregon, you move through a glory of plant life. There are hydrangeas with blossoms the size of Alaskan cabbages, massive rugosa rose bushes thick with flowers, rhododendrons the size of trees, dense beds of rudbeckia growing chest high to a tall man. The word “lush” falls short of an apt description of this landscape.

You bend down to scoop up a handful of soil, expecting a soft, dark loam. You bring up, mostly, gravel.

NOT-SO-TOP TOPSOIL:In the early 1990s, when he bought the old farmhouse and surrounding hillside acreage that would become the nursery, Mike Smith acquired land that could be charitably described as “difficult.” The topsoil, some 160 feet deep, was a dense clay loam deposited when the great Missoula flood scoured out the Columbia River channel. That is a soil type that compacts easily, dries hard and, on a slope, sheds precious rainwater.

Smith credits an old friend—a landscape designer—with guiding him toward the soil amendment strategy that allows him to grow a wide array of plant types in his difficult soil. The friend shared an English garden magazine article that described a long-established practice of loosening dense soils by work- ing in large amounts of “turkey gravel” and compost. It enables gardeners in the South of England, where the soils are dense and chalky, to succeed with the densely planted borders of which they are so fond.

GRAVEL AND COMPOST: Working from the magazine article’s recommendations, Smith determined that, in most areas, he would work in 2 inches of gravel and about 4 inches of a locally available cedar bark com- post. He would then add another 3 inches of compost on top as a mulch.

Turkey gravel,which has particles about 0.13 inches in diameter, wasn’t available near Scapoose, so Smith went with the most similar material he could find, which is 1/4-10 gravel. He doesn’t incorporate any sand; he feels that commonly available grits aren’t coarse enough.

“Many years ago, construction sand was much coarser than it is today, and less uniform, much like English turkey grit. It might have worked just fine.” Given a choice between coarser or finer than he wanted, he opted for coarser. “And we used gravel that is crushed, not washed.”

Smith found that he could achieve better results by varying the amendment formulation based on the type of plants in a bed. For Alpine plants, which are thrifty and evolved in dense soils, he uses less compost and adds several inches of gravel at the surface as a mulch. It allows the plants to bask in full sun but still have their root runs cool and slightly moist, even in August. The vegetable beds get an extra heavy application of gravel in the soil to loosen it.

GRAVEL AS TOPDRESSING: When the small lawn in front of the farmhouse began to disappear beneath the footsteps of thousands of visitors to the nursery, Smith tried both organic- and chemical-based turf amendments to no avail. Then he began topdressing it with gravel. After many such applications, the turf stays healthy even with infrequent watering. According to Smith, rain, gravity and earth- worms do all the work of incorporating the gravel into the lawn. “All we do is spread a thin layer of gravel and let nature do the rest.”

Smith and his business partner, Maurice Horn, also do dozens of landscape and garden installations each year. They have developed 15 different soil mixtures, each one suited to one of the many soil types they encounter in the geologically diverse region around Portland, Oregon. Just about every one includes some percentage of gravel. When a client is dubious, he shows them the results at the nursery. 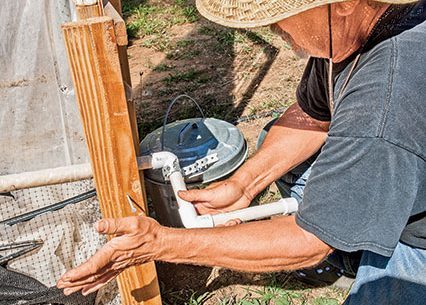 How To Keep A Bad Back In Good Shape

After 30 years working as a mechanic, Mark Crespo’s back isn’t doing well. A...