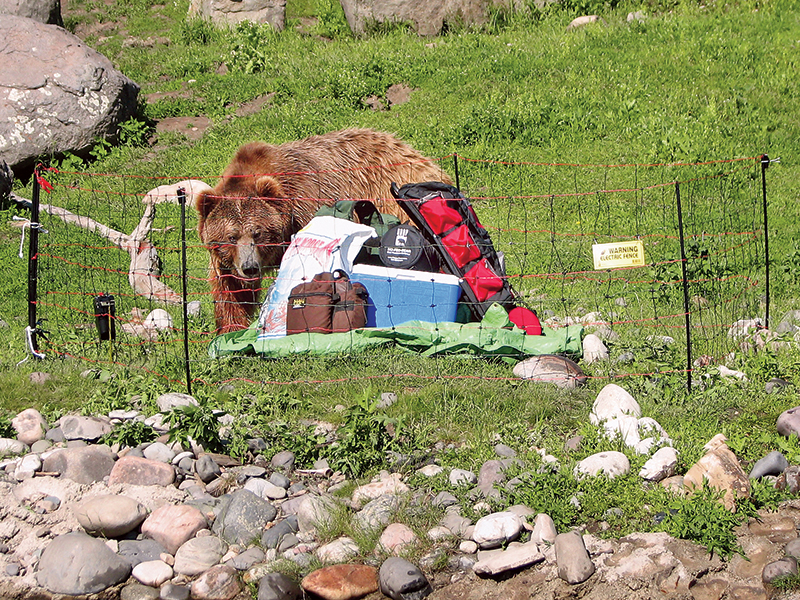 1 of 4
Bear Attack Survival: Staying Safe in the Wilderness
When confronted by an angry bear, don’t run or look for a tree to climb. Stand your ground and slowly back away. 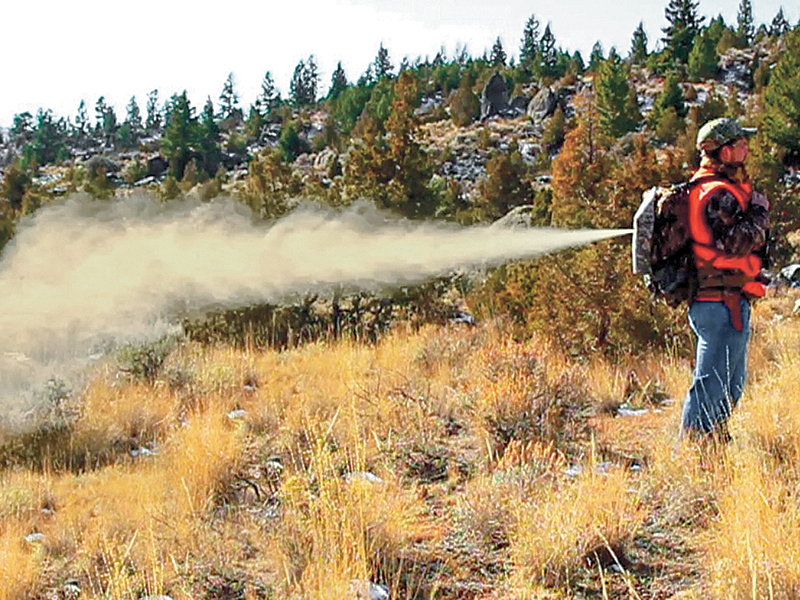 2 of 4
Bear Attack Survival: Staying Safe in the Wilderness
UDAP offers a Bear Spray Back Attack Pack, which provides protection from unexpected charges from behind or if a bear has you pinned on the ground. 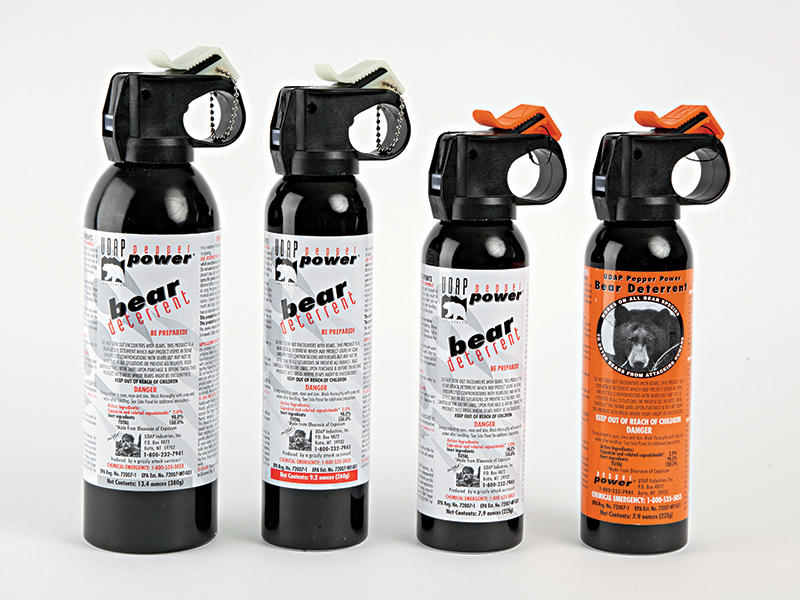 3 of 4
Bear Attack Survival: Staying Safe in the Wilderness
UDAP bear sprays have been effective in keeping bears at bay. 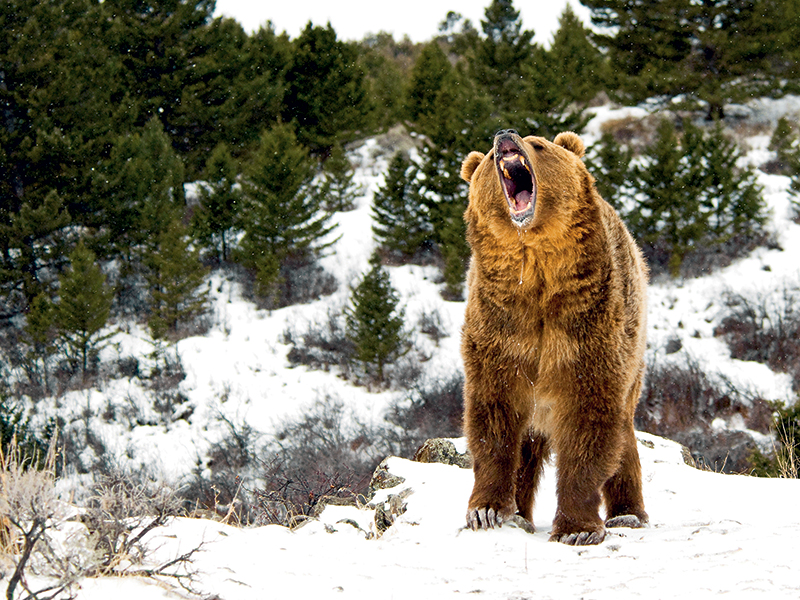 4 of 4
Bear Attack Survival: Staying Safe in the Wilderness
When confronted by an angry bear, don’t run or look for a tree to climb. Stand your ground and slowly back away. 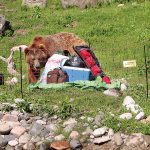 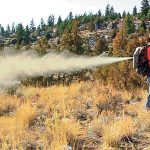 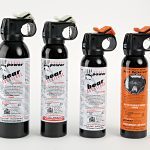 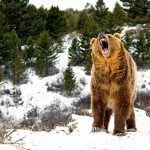 If you hike, ride a trail bike or simply like to spend time outdoors, you’re at risk for a potentially fatal bear encounter. Smaller and more numerous than grizzlies, black bears can also be a serious threat to life and limb. How you react to this threat can make a real difference to your longevity.

Bear encounters are occurring with increased frequency. Every year, joggers and hikers in wilderness areas are maimed or killed by these apex predators. Urban encroachment into once “wild country” also contributes to bear-human encounters.

I’ve hunted in Alaska several times. Giant brown bears (oversized grizzlies) are numerous, but it was a large black bear that dogged my bootprints for more than a mile in deep snow. I wasn’t aware of its presence 10 feet behind me until my guide, Ed Stevenson, met me on the trail, carrying a lantern to show the way. When he dropped the lantern and unslung his rifle, I heard a commotion behind me. I looked back in time to see a large bear disappear into the underbrush.

“He was getting up his nerve to attack,” Ed said. “You were lucky I showed up when I did.” Ed, who has been fortunate to survive three separate brown bear attacks, then told me black bears are more likely to kill you.

“Brown bears simply want to make sure you’re no longer a threat,” he said. “Remain motionless and the animal will usually walk away. But be sure it’s gone before you move again. A black bear will continue the attack until it’s sure you’re dead. Then it may eat you.”

That underscores two tactics that may leave you bruised, bleeding and battered—but alive—when a bear attacks. Most experts advise lying facedown on the ground with your hands clasped behind your head and neck when attacked by a grizzly. If you don’t attempt to fight back, the attack may be short-lived. If you’re wearing a pack, don’t take it off. A pack on your back can minimize injuries during a mauling.

If a black bear attacks, you’re advised to kick, punch and do whatever you can to fight back. You’re literally fighting for your life. If you simply lie motionless, you’re liable to become the bear’s dinner.

You don’t have to be in the wilds to have problems with bears. As homes continue to encroach on what was once bear territory, your chances of meeting one face to face continues to escalate. Bears that have become habituated to human contact are particularly dangerous.

Maulings are most likely to occur when you surprise a bear. The danger is particularly intense if you encounter a sow with cubs or if the bear has an animal carcass stashed nearby. Be aware of your surroundings: You won’t see a bear if you concentrate only on the trail before you. Stay alert to your surroundings!

Many experts advise singing, periodically clapping your hands or hollering “Bear! Hey bear!” If a bear knows you’re in the area, chances are good that the animal will leave without confrontation. “Bear bells” tied to your backpack or hiking staff also make a continuous noise.

The best protection against bear attacks is a can of capsaicin (pepper) spray designed specifically to repel bears. Such sprays are more potent than those intended for use against human attackers. Be sure you’re familiar with the safety switch your spray comes equipped with, and that you can operate it instantaneously.

A large-caliber rifle or a slug-loaded shotgun can also protect you from bears, but it may not be legal to carry a gun in the area you’re hiking. Accuracy is difficult with magnum revolvers when a bear charges you, and a wounded bear is an angry one. Most bear hunting guides recommend a .338 Winchester Magnum or larger caliber. It’s illegal to shoot bears in some areas, so this may be only a last resort.

If you encounter a bear, whatever you do, don’t run! Running tells the bear that you’re prey and triggers the animal’s instinct to chase you down and likely kill you. Bears can run 30 miles per hour or more—faster than a horse, and a lot faster than a man! Also, don’t scream—that’s another indication you’re prey.

Your best bet is to spread your arms high and wide to try to look tall, all while standing your ground and talking to the bear in a calm voice. Back up slowly or move to one side. Make sure the bear knows you’re not a threat. If other hikers are with you, cluster together to give the impression of larger size.

Try not to look the bear in the eye as it may see this as a sign of aggression. Casting your eyes down or to one side signals submission and that you’re not a threat to the animal.

Climbing a tree is usually a bad idea. Black bears climb like scalded cats, and grizzlies have been known to climb 30 feet or more to drag a fleeing hiker out of a tree.

Is There a Safe Distance?

The scent of food is a big attraction. If you’re camping, be sure to store your food in a bear-proof container at least 100 yards from your tent. Portable electric fences will keep bears at a safe distance. These fences don’t require much battery power and bears tend to bite single-strand fences erected 3 or 4 feet above the ground. The resulting shock should deter bruins from approaching your tent. 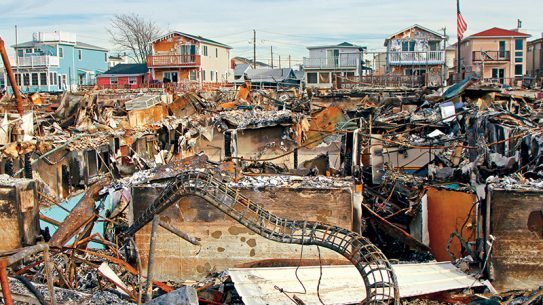 Bushido Tactical's specialized course is designed for individuals who want to prepare for urban...