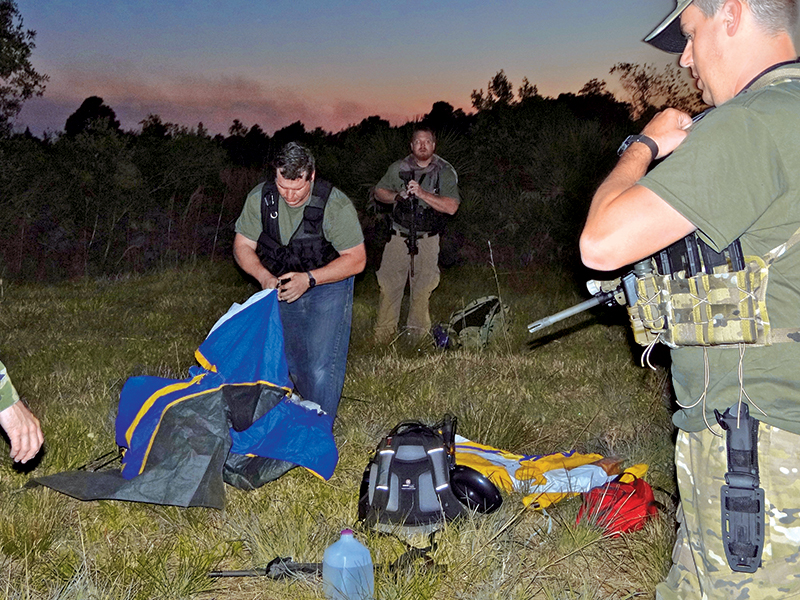 1 of 4
Urban Survival: A Lesson in Disaster Readiness
Students of the Bushido Tactical Specialized Urban Survival Readiness course making camp, where they learned to share and rely on each other. 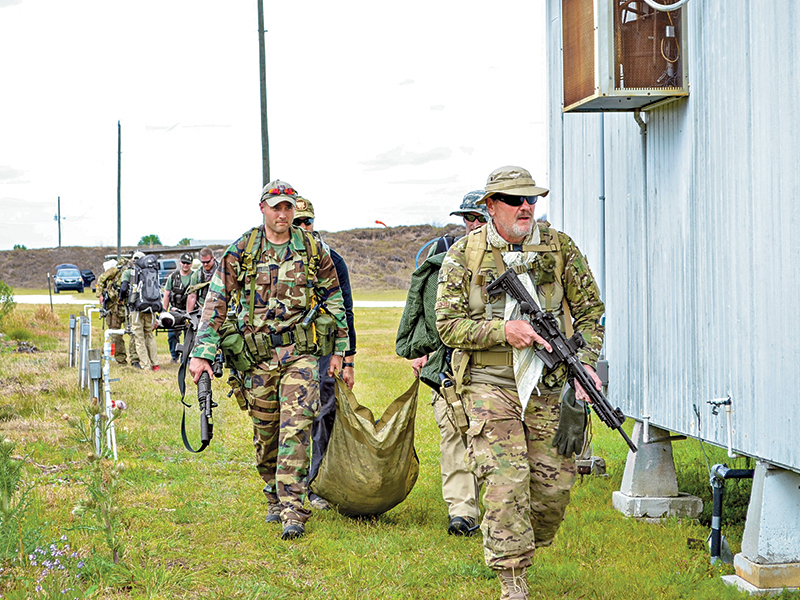 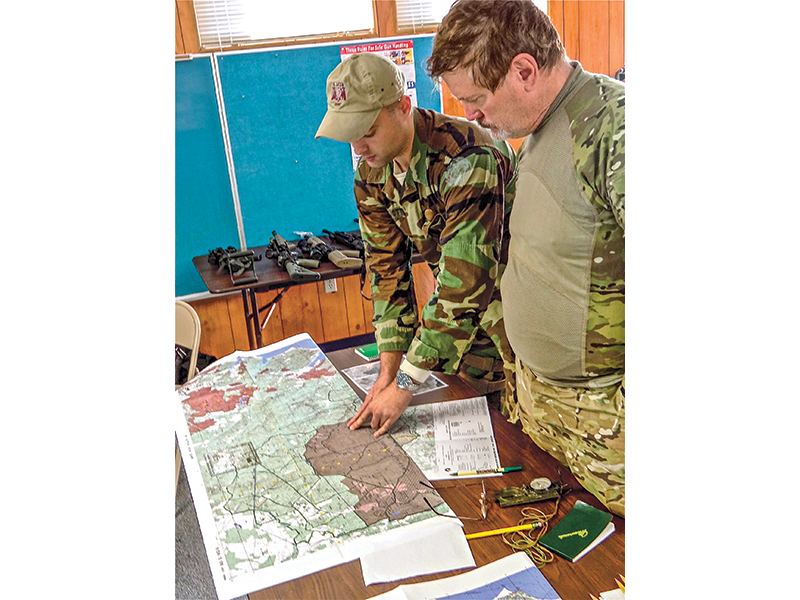 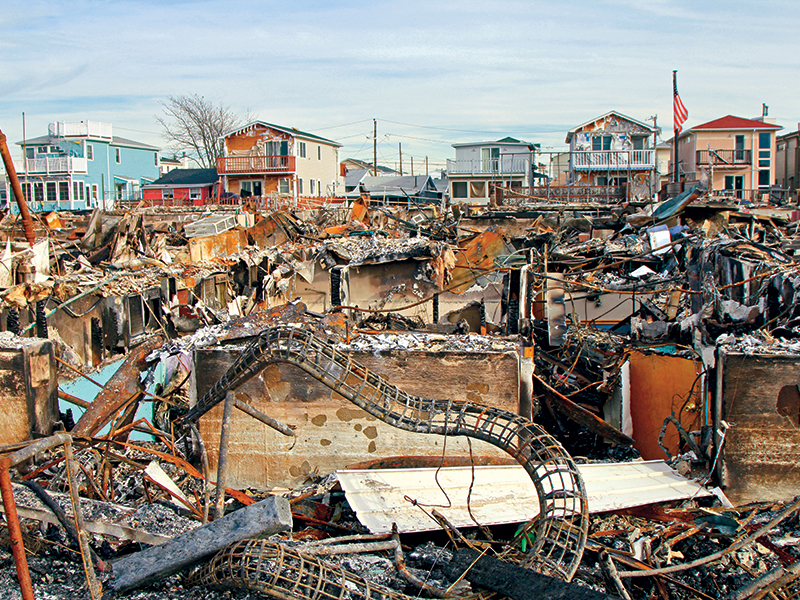 4 of 4
Photo by BigStock
Urban Survival: A Lesson in Disaster Readiness
A look at the aftermath of Hurricane Sandy. 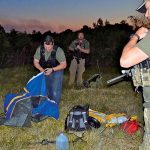 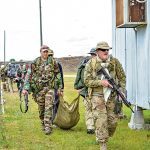 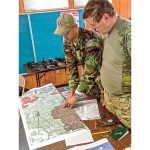 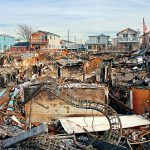 Less than 24 hours after Category-5 Hurricane Andrew made landfall and destroyed South Florida, there were few intact structures, no lights, no power and no police. After dark, the typical ambient light from the city (light pollution) was gone, replaced by the darkest imaginable void that was filled with dangers of the worst urban variety. Well after midnight I saw the headlights of a car come down my street, slowly weaving its way through the downed trees and power lines, stopping directly in front of my house. Four car doors opened and closed, followed by approaching footfalls. It was so quiet and still that although my location was cloaked by the humid darkness, the sliding metallic report of my AR-15 SP1 bolt carrier running forward and chambering a round was clearly audible in the thick, hot air. Quickly the footfalls retreated, the four doors opened and closed again as the car moved on down the street after the occupants with unknown motives realized that they too faced a danger in the post-disaster dark.

My family and I have lived through the aftermath of not one but several examples of local breakdowns in civilization, including city-wide riots, as well as hurricanes Andrew and Katrina. Each one destroyed homes, businesses, lives and turned large areas into a lawless, primitive arena. The rule of law was replaced by the pressing needs of desperate people trying to obtain the limited basics of life—clean water, food and shelter. In addition there were the people who exploited the lack of law enforcement to simply destroy, loot, vandalize and victimize the weak for personal gain. The situation required that survivors become quickly proficient in obtaining what was needed, knowing how to operate without any social, economic or governmental support and then having the ability to protect themselves from those who wished to take what they had or simply do harm to others.

Although my family and I survived, I wish I knew then what I know now based on a recent course that I took in Florida. The Bushido Tactical Specialized Urban Survival Readiness course (SUSR), taught by experienced operators Wade Rorich and Brad McCulloch, is designed exclusively for individuals who want to prepare for urban survival and natural disaster situations. Students learn, demonstrate and are tested on the important skills to survive with the most basic equipment as well as gear in their BOB (bail-out bag) that they have brought to the class.

This challenging course trains participants to survive in rough situations and a primitive environment. Using only what a person could realistically carry and would use in a real-life disaster, this class purposefully (but realistically) stresses students through training.

While not a camping trip, the SUSR class requires the students to sleep in homemade shelters or tents as part of their load-out. Our first night was cold and our exposed gear was layered in frost by morning, and that was a stress as it showed each participant if their gear was adequate to keep them operational during all weather conditions. Wade ensures that students are constantly challenged to operate out of their comfort zone, making sure the lessons learned are readily absorbed. Most important was the development of the “survival mindset.” The correct mindset will enable people to operate no matter the conditions, regardless of what they have available, and ensure they will always make the most of their situation.

Since weapons are both carried and used during the course, safety is paramount to ensure that basic weapon handling skills are second nature. Anyone wanting to attend this course will be screened first and verified to meet the requirements, ensuring that the student would be a good fit based on the course content being taught. Basically, it is not for everyone. It is for individuals, couples or groups that take their family’s safety seriously and who are ready to be trained to prepare and prevail through the harshest times that a person may be forced to deal with. Part of the course involves team challenges, with groups competing against each other for rewards and to see how well they do when called on to show their newly learned skills.

The other participants in the class included health-care professionals, students and even a lawyer or two. Bryan G. said, “I wanted to find out what it was like to take survival training” and felt that it was an important because, “If you ever need it, it is nice to know that you have that ability. You just might get stranded in a car miles away from civilization, so you never know!” Andrew K., who came from Dallas, Texas, and works for a geological survey company, signed up for the course to “brush up on the skills that I learned in the Army, as a refresher, as well as learn new ones. The wearing of gear was a stress, but it really helps me figure out what works and doesn’t work!” Logan Elliott, an attorney, took the course because “I live on the coast of Florida and we are no strangers to hurricanes, and so I figured it would be a good idea to prepare for a worst-case scenario that (after a hurricane) we would be without power, so having the ability to make shelter, build a fire and purify water and other general survival skills would be important. You can take what you learn here and build on it. But even if you take just this class, you will be able to live in the wild and do well.”

A great deal of success in this kind of survival is preparing ahead of time with the right gear. While most of the students shopped at Bushido Tactical for their rifles, accessories and tactical nylon gear, some students like engineer Peter S. had already prepared their bail-out bag and tested what they had during the course. I was prepped by Eric G. of EMG Training and Consulting, who provided me with load-bearing nylon that helped distribute my load, and John Andreozzi at Out Tac Outfitters, who set me up with well-used gear that included a compass, freeze-dried meals, chemical lights and the Out Tac survival kit, which contained many useful items. The fire-making components were greatly needed, as they were used to start our first fire as the temperature was dropping below freezing.

I was lucky to obtain a lightweight Lancer L15 rifle for use during the course. As with most people, I have come full circle from having an early Colt AR-15 SP1 rifle with a pencil barrel and flip sights on the carry handle, then a heavy barrel M4 with every doo-dad clamped on its quad rail, and now I’m back to a lighter, leaner and meaner carbine that can be carried all day without exhaustion. The 7-pound Lancer L15 Sporter, with its composite forend and accurate fluted barrel, was perfect for the one weapon to carry and use when the going got rough. And just like after Andrew and Katrina, it did.

The SUSR course is very physical and mentally challenging, so anyone attending will need to be in sufficient shape to walk distances carrying gear, ammo and weapons. I will not go into details about the evolutions because the unknown is something that has to be conquered through confidence, and that is a significant element of the course. Because of that, only a minimal amount of photographs and content have been posted or discussed in order to protect the course curriculum and keep this course very realistic by allowing students to deal with the unexpected. As a result, I was very apprehensive, as were most of the other participants, even those less than half my age. However, with the right gear, a survival mindset and teamwork, I made it through to the end.

Why do it at all? People prepare for the worst the best they can, but they seldom take the last step to validate their plan, gear or ability in a realistic environment. This class shows both the strengths and weaknesses of your kit and is designed so that if you make a logistical or training-based mistake, it is simply a learning experience and not a fatal mistake. It is better to find that out when the stakes are low and no lives are at stake.

For more information on the Bushido Tactical’s SUSR course and gear, visit BushidoTactical.net or call 407-674-7464.