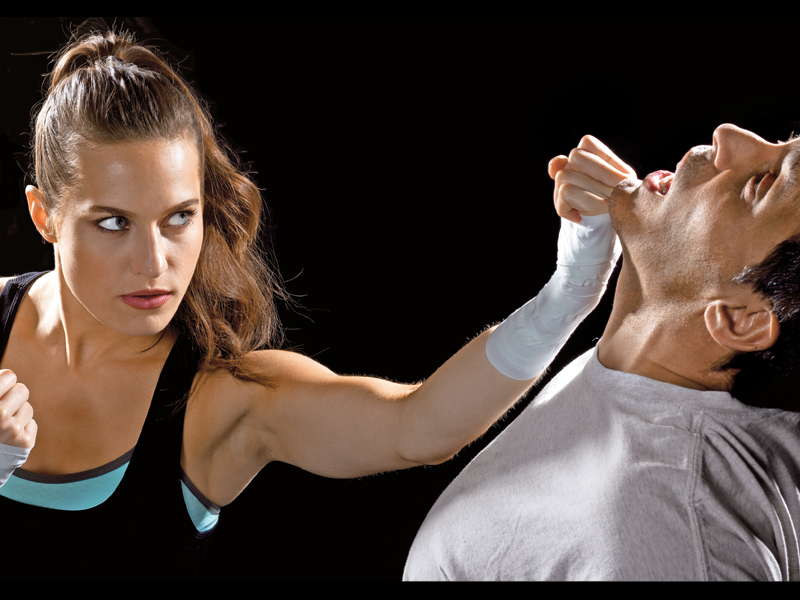 Photo by www.bigstock.com
"There is a way to not only escape from a violent attacker, but to actually take him down hard and make him regret his decision to target you in the first place."
Comment(s)

How can a small woman overpower an aggressive male attacker? Truthfully speaking, she probably can’t. Her muscular strength and body composition were not physically designed to be greater than a man’s. This fact may not be very reassuring when she (or anyone else with lesser strength than their assailant) is confronted and ultimately assaulted. However, there is a way to not only escape from a violent attacker, but to actually take him down hard and make him regret his decision to target you in the first place. This secret lies not in how hard you hit him, but rather in where you hit him to produce the maximum results with the least amount of effort.

In order to compensate for the imbalance in strength between you and your attacker, you need to focus your power (or, to be more precise, your energy) toward his body’s vital areas, allowing you to take the issue of strength right out of the fight’s equation.

Vital areas are sensitive parts of the body that can be severely affected to cause pain and/or immobilization during a fight with very little physical effort. They cannot be built-up or strengthened “in the gym,” which makes them ideal striking points when in a self-defense situation. These areas include the eyes and eye sockets, the bridge of the nose, the ears, the throat and the groin. Other vital points on the body, though less obvious than the others, include the fingers, the inner knee area, the outer thigh muscle (the sciatic nerve), the back of the neck as well as various pressure points found throughout the arms, legs, neck and face. Each vital area, when affected, creates a unique response in the recipient. Knowing what each reaction produces allows you to create your own set of self-defense moves that, in turn, become your weapons against strong or overly powerful opponents.

There is more than one way to strike your attacker. When people hear the word “hit,” they immediately think of a closed fist widely swinging towards someone’s face. Truth be told, this is probably the least effective way to hit your attacker’s vital areas. Precision is what you need to maximize results, and a clenched fist just isn’t very refined. Instead, you must learn many new and, at first at least, seemingly odd ways to hit your intended vital target. The hand alone can produce nearly a dozen or more distinct strikes. Some of these include using a single knuckle, four fingers as a spear, the blade of your hand to chop, the thumb as a hook, a downward fist like a hammer and all four fingers curved like a claw. Add to this barrage short, low kicks, elbow and knee strikes, and disabling chokes and you have a multitude of options to exploit your attacker’s “weak spots.”

A combination of continuous movement and vital area striking is essential to overcome your assailant. Remember, if he is a lot bigger and stronger and he grabs and holds you, your chances of escape become very slim. A bigger person will typically grab as an illustration of his power and control, so it is essential to avoid his attempt to hold you through the use of constant fluid footwork. As you parry (redirect the oncoming attack without stopping the oncoming energy) his initial grab, lunge, punch or any other form of attack, immediately go on the offensive against him.

Striking vital areas with life-saving success takes an understanding of what exactly is happening to your attacker when you affect various targets throughout his body.

If attacking the head, make a cup shape with each hand and simultaneously hit the attacker’s ears very quickly. This shock will create a centralized “boom” that will disorient and momentarily deafen him, while possibly bursting an eardrum. The bridge of the nose shatters easily with a back-fist or hammer-fist strike, causing the attacker’s eyes to severely water and his face to throb intensely. The high volume of splattering blood may be enough to make him run away panicked or in fear that he has sustained severe injuries. The eyes can be blinded momentarily with a finger poke or thumb snap, which alone can give you sufficient time to make your escape. The attacker’s throat is a prime target for a knuckle strike or a chop from the blade of your hand. This creates intense discomfort if moderately hit, or it can result in a collapsed airway and a damaged larynx if severely hit. As your attacker gasps for air, run for safety or follow up with additional vital area strikes.

The fingers are easy targets for you to exploit.When he puts his hands out towards you, secure one or two of his fingers and apply pressure directly downward. Once his fingers reach their maximum flexibility and lock, he should drop to the ground instantly due to the intense pain and the snap and crackle of broken or dislocated bones. Once he is near the ground, follow up with your knee to the previously mentioned facial targets, to ensure no further follow-up attacks from him and that you can get away from the dangerous situation without injury.

The groin is also fair game when overcome by a stronger foe. A strike, kick or “pull and twist” are all viable attacks to help you during a life-and-death situation. A strike to that region will naturally create intense pain and cause your attacker to release his grip from you and direct his hands to his injured body part. A quick grab, pull or twist, on the other hand, is more of a “shocking” type of defense that you can perform. In this case, he may momentarily stop his attack from the unexpected pain. You must then press your advantage with follow-up strikes before he has a chance to recover and turn his attention back on you.

Mix up a variety of combination strikes and locks because all situations differ when out on the street. 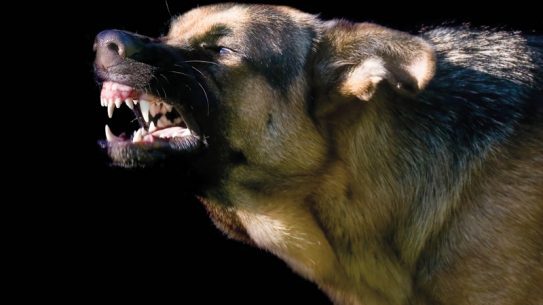 Selecting a working dog for protection.