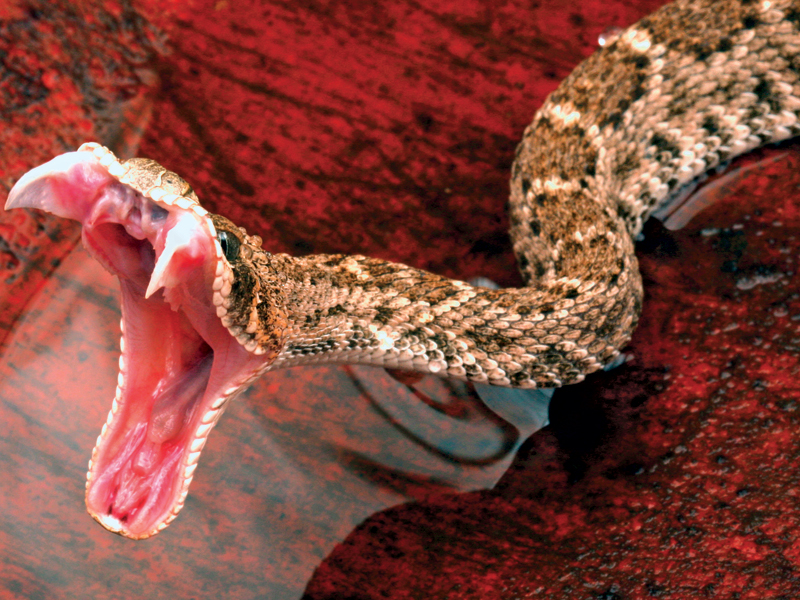 1 of 12
Photo by Shutterstock
How to Prevent and Defend Against a Deadly Snake Attack
“There are four types of venomous snakes in the U.S.: copperheads, rattlesnakes, cottonmouths and corals.” 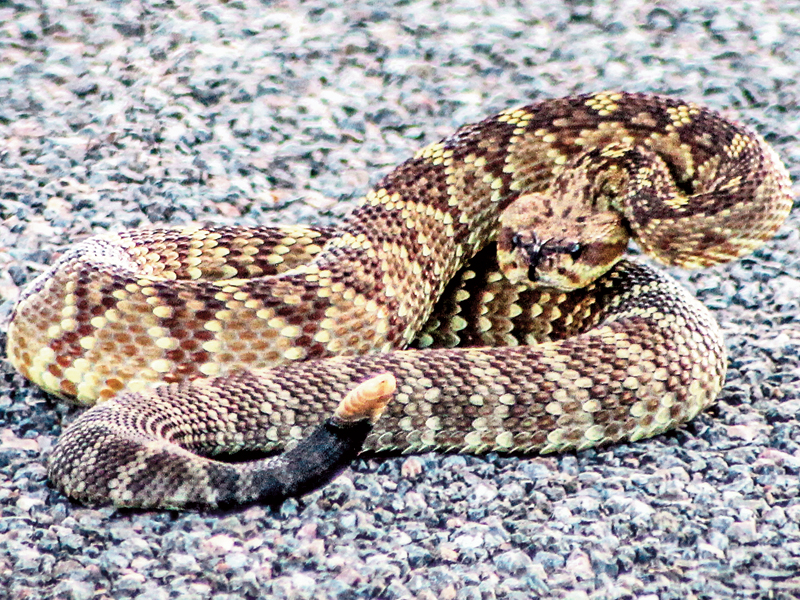 2 of 12
Photo by Gary & Cindy Smith/Gunsite Academy
How to Prevent and Defend Against a Deadly Snake Attack
When snakes are coiled and preparing to strike, their heads are motionless and easier to hit. Never get closer than 6 feet. 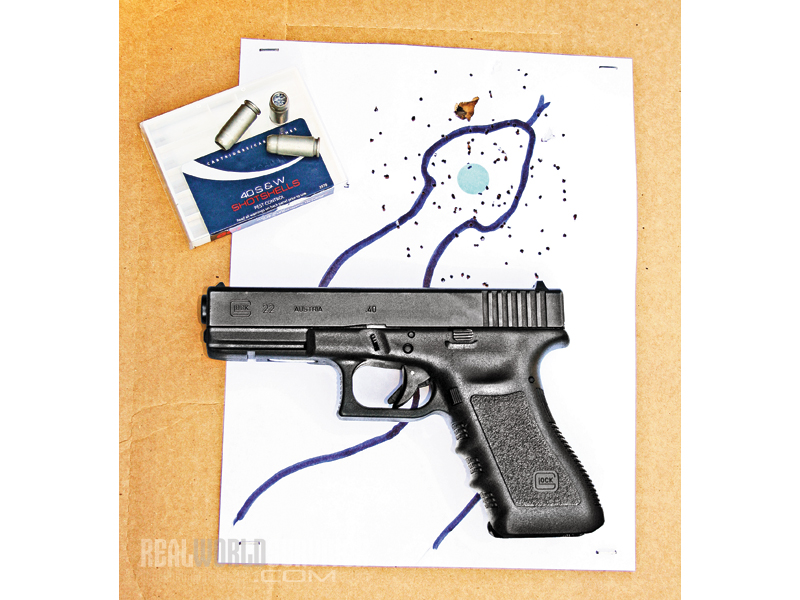 3 of 12
Photo by Richard Mann
How to Prevent and Defend Against a Deadly Snake Attack
This homemade snake target was shot with a Glock 22 at a distance of 7 feet using a CCI Shotshell. 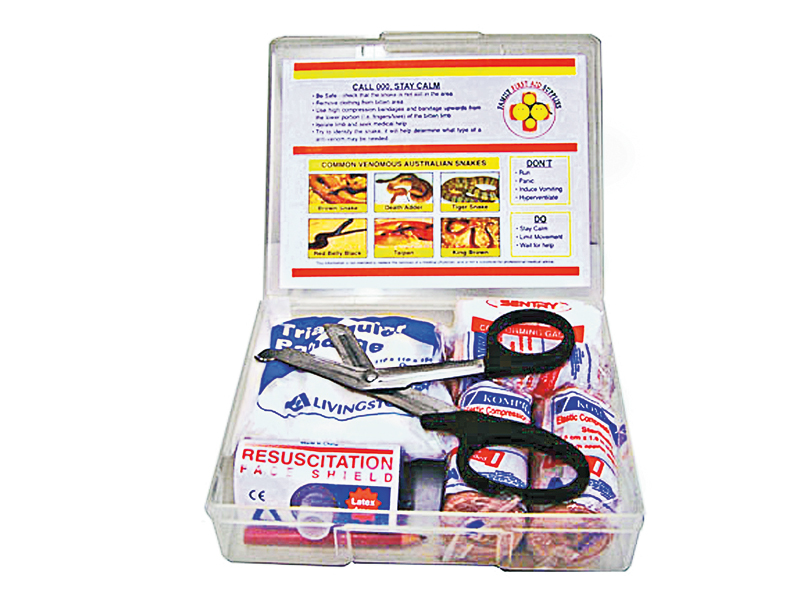 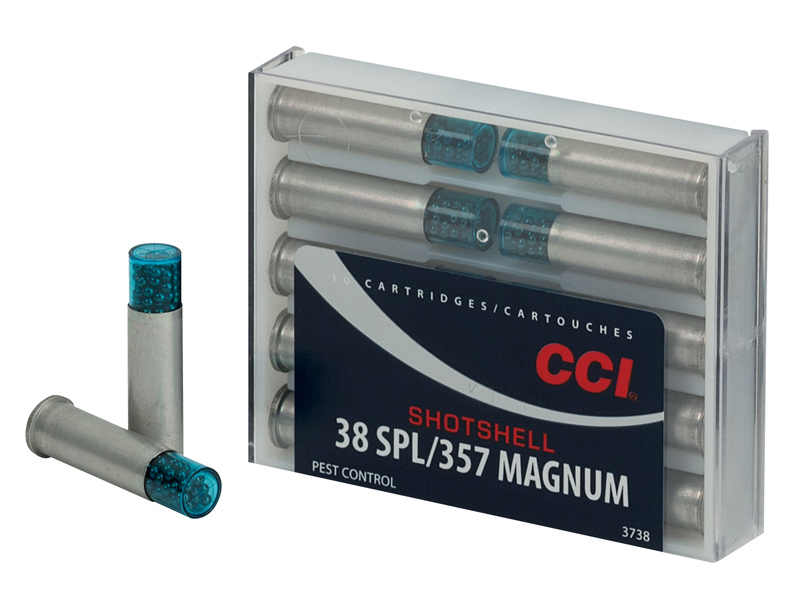 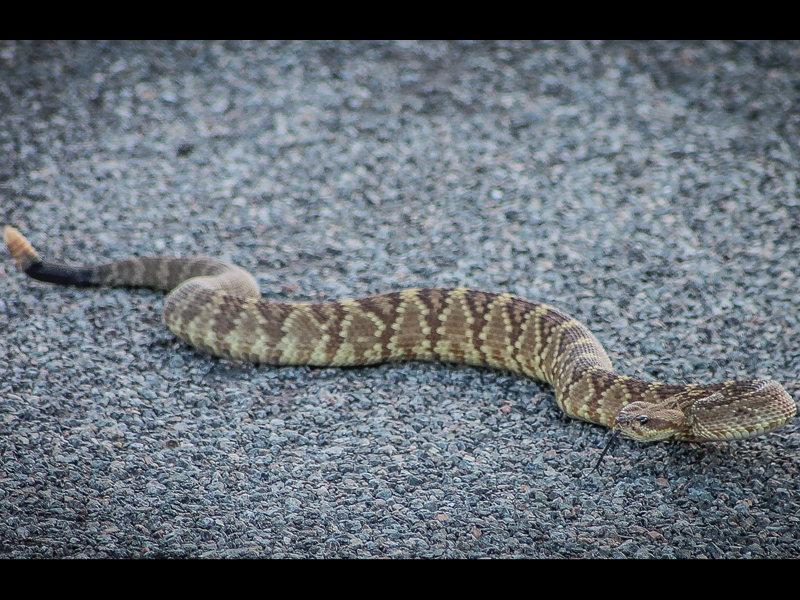 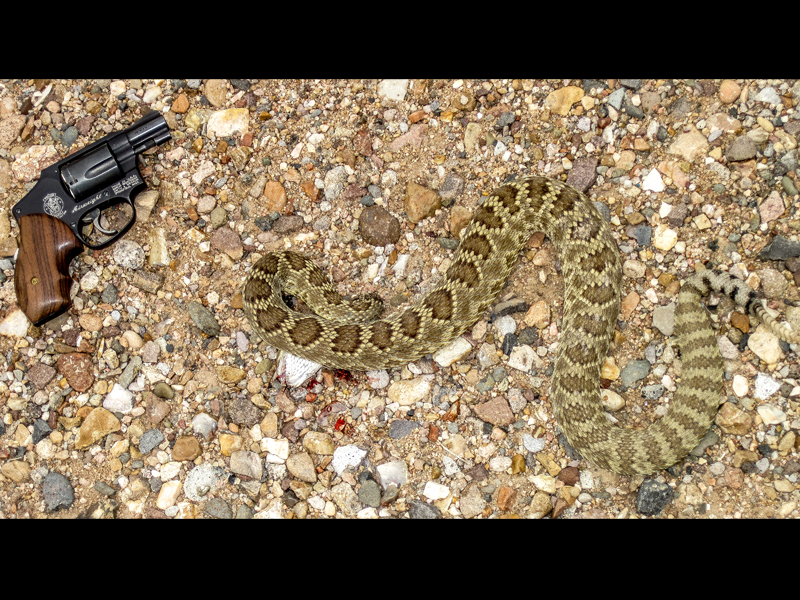 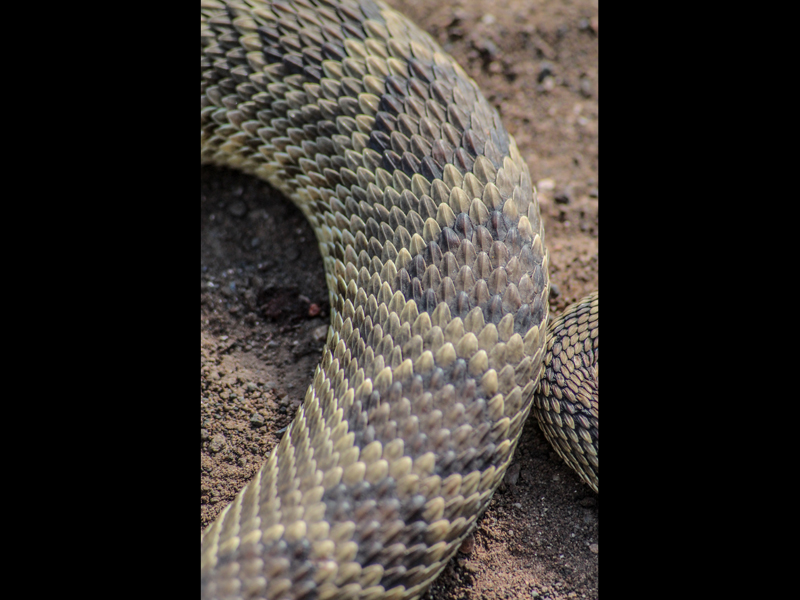 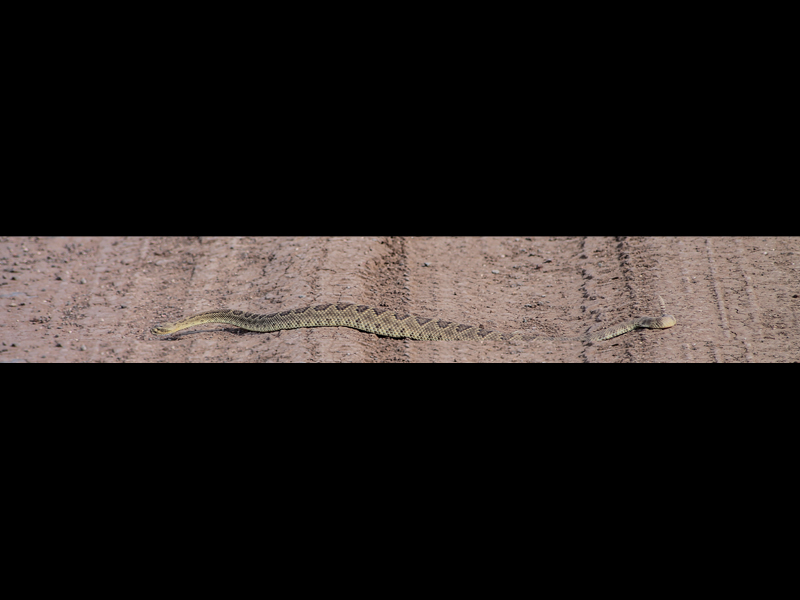 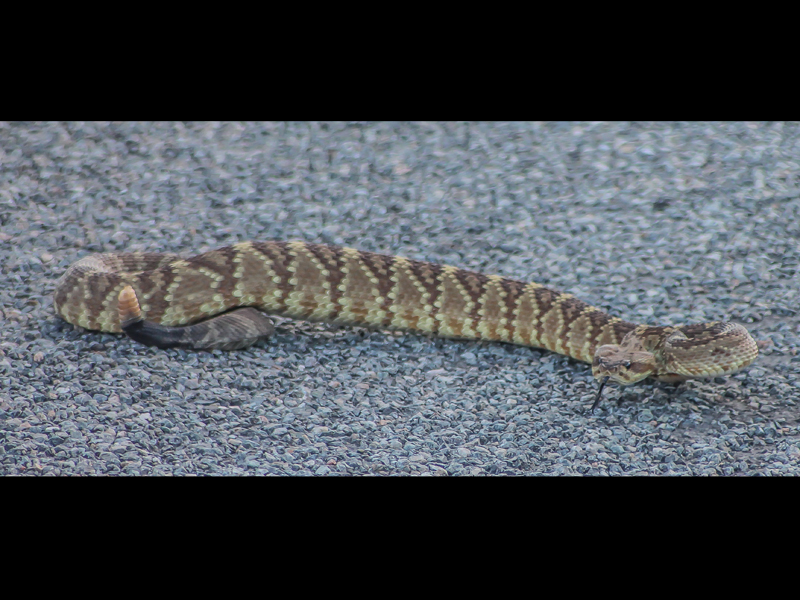 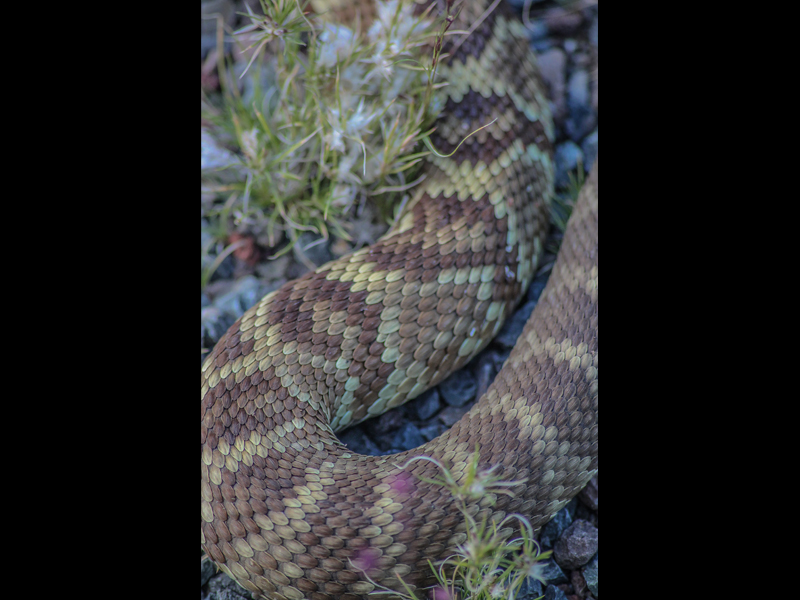 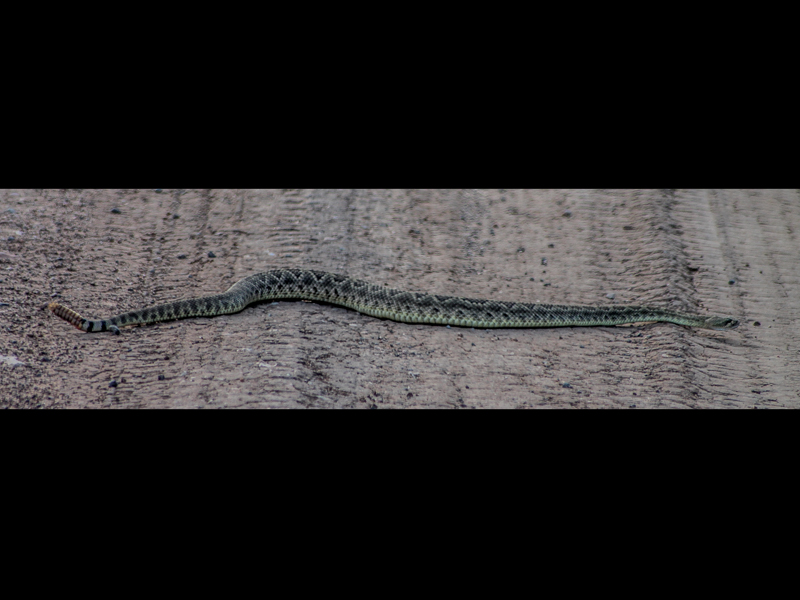 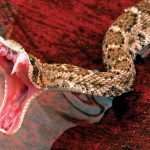 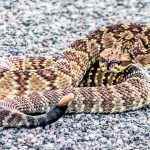 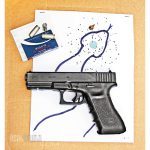 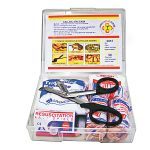 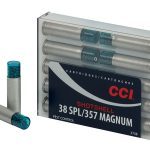 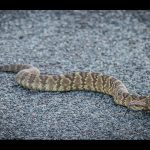 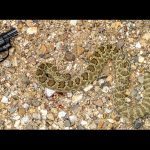 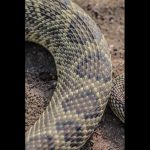 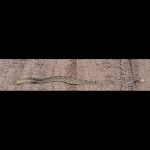 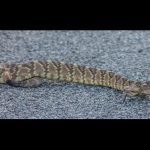 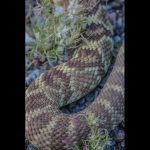 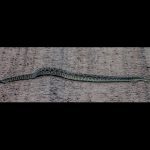 Any serious survivalist should know how to identify venomous snakes, how to kill them and how treat their bites. There are four types of venomous snakes in the U.S.: copperheads, rattlesnakes, cottonmouths and corals. The first three are pit vipers, and the coral is an elapid (because of its hollow, fixed fangs). Within these three types there are over 40 variations, and at least one is found in every state with the exception of Alaska and Hawaii.

Approximately 7,000 venomous snake bites are reported each year in the United States. If bitten, you have a 99-percent (or better) chance of survival. This is probably because about 50 percent of the bites are dry, meaning no venom was injected. That’s good news, but if you’re bitten you’ll be thinking about that 1 percent instead of the 99 percent. Bites from coral snakes are rare but high-risk. Coral snakes have a neurotoxin venom (which attacks the nervous system), and antivenom is often required for survival. Pit viper venom is more complex and is a hemotoxin (which causes blood and tissue damage). Unlike a coral snake bite, a pit viper bite is very painful. As with everything else related to snakes, there are exceptions. One variety of the Mojave rattlesnake and a few other rattlesnakes also have a neurotoxin component to their venom.

Unfortunately, there is no first-aid protocol for snake bites that everyone agrees on completely. But if bitten, you should do the one thing that is the hardest to do, and that is to remain calm. And, most agree you should not apply a tourniquet or ice, or cut the bitten area and attempt to suck the poison out. Watch for signs of shock and treat accordingly. Seeking professional medical assistance swiftly is the best course of action. Absent a qualified professional and antivenom, it’s pretty much a wait-and-see situation. Aside from death, long-term effects can be as innocuous as minimal scarring to required amputation.

The best thing to do is not get bit in the first place, and while many offer the advice of “leave the snake alone and it will leave you alone,” I tend to look at it from the standpoint of, if I leave the snake alone today, it might get me or someone else tomorrow. If I see a poisonous snake, I kill it. In some locations, however, snakes are considered a protected species, so be aware of any local laws protecting them.

Shovels, rakes, sticks and knives are not the proper snake-killing utensils, though those tools have probably killed more snakes than anything else. Arguments exist with regard to exactly how far a snake can strike. Some say one-third of their body length, some say half, and some say two-thirds. I’m not sure why anyone cares because it is foolish to get that close to any venomous snake. It’s safe to assume that, on average, the longest venomous snake you will encounter in North America will be between 5 and 6 feet long. So, to be on the safe side, stay at least 6 feet away from any venomous snake you encounter. That means forget the shovel!

As with most dangerous critters, a gun is generally the best solution because it allows you to keep your distance and still deliver a death blow. Of course, the problem with snakes is that they are not very large targets, unless they are coiled. The other problem with snakes is that, by virtue of being a reptile, even a serious injury to their body will not prevent them from biting. The best way to kill a poisonous snake is to destroy its head so that its fangs are no longer a threat to you or anyone else.

Growing up and living in the Allegheny Mountains, I’ve spent most of my life around timber rattlers and copperheads, and I’ve killed or seen them killed with a variety of instruments and firearms. Hands down the most effective snake gun is a shotgun loaded with the smallest shot you can find. At about 10 to 15 feet, a shotgun of any gauge will shred a snake’s head and/or body.

“I’ve tested the CCI pistol shotshells for every cartridge they are offered for…and at a distance of between 6 to 9 feet they are all lethal to snakes.”

Trying to kill a snake with a single bullet to the head can be problematic, particularly if the snake is not holding perfectly still. Even if a hit is obtained, expect the snake to go into a withering dance while trying to bite anything, including itself, in range. And this is where it gets really complicated. If you get a single bullet hit on a snake anywhere on its body, you’ll be lucky if you can get a second hit anywhere due to the wild wiggling that will follow.

The problem with a shotgun for snake defense is that, due to its size, you may not always have a shotgun with you. I can’t foresee a survival situation where you should not be armed with some sort of firearm, but the one most likely to be within reach at all times is a pistol. The shotshell pistol loads from CCI have proven very effective on snakes, which is why most every Gunsite instructor carries a spare magazine loaded with these specialty rounds. Gunsite is located in Arizona, where they have the especially hideous version of the Mojave rattler.

I’ve tested the CCI pistol shotshells for every cartridge they are offered for, and while results will vary from cartridge to cartridge and gun to gun, at a distance of between 6 to 9 feet they are all lethal to snakes. I once killed a skunk at about 6 feet with the CCI .45 ACP shotshell. CCI also makes shotshells for the .22 LR and the .22 Magnum.

For me, I have a three “S” rule when it comes to poisonous snakes: See it first, stay away, and shoot it dead. Follow that advice and you’ll not have to worry about proper first aid treatment. And, well, snakes are edible. 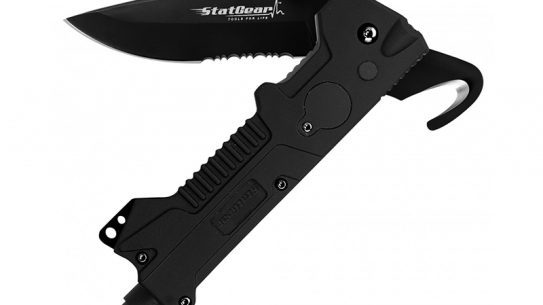