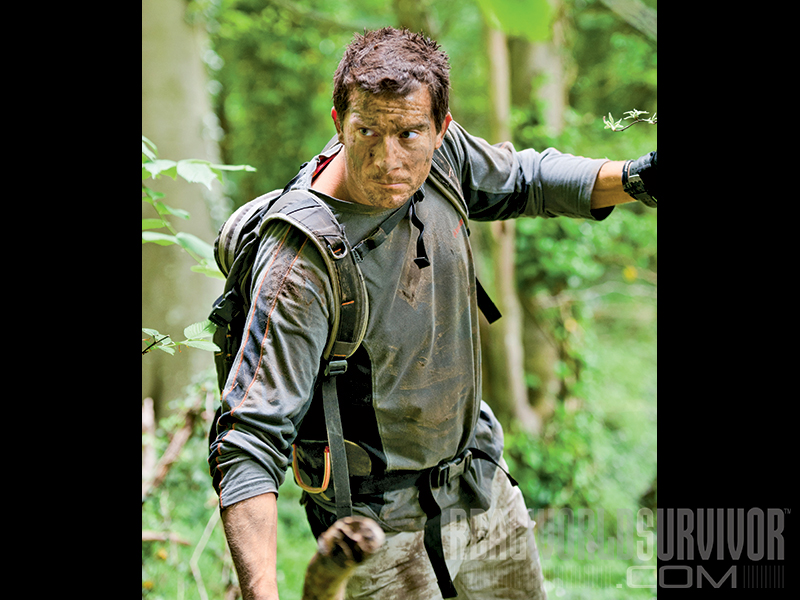 1 of 7
Navigating the Backwoods with Bear Grylls
Author, motivational speaker and born survivor, Bear Grylls is completely at home in the middle of nowhere with almost no equipment. 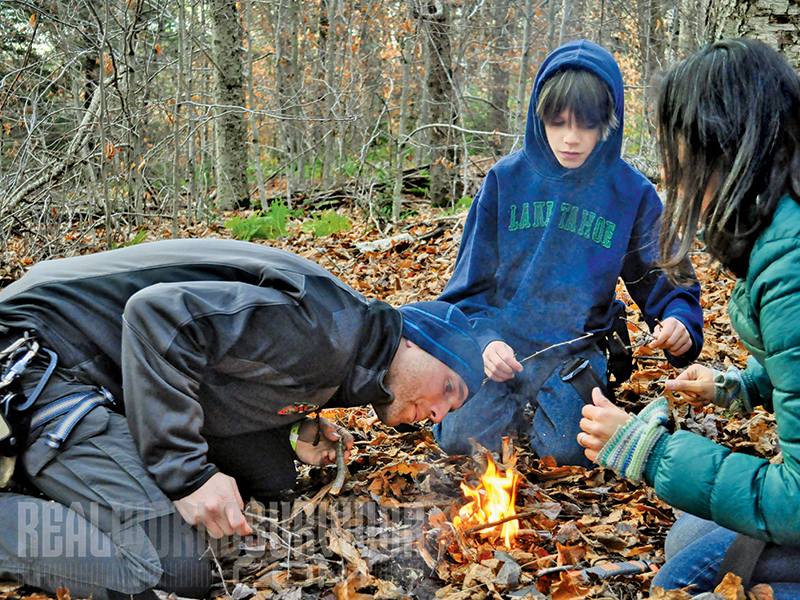 2 of 7
Navigating the Backwoods with Bear Grylls
Fire starting is an essential survival skill. 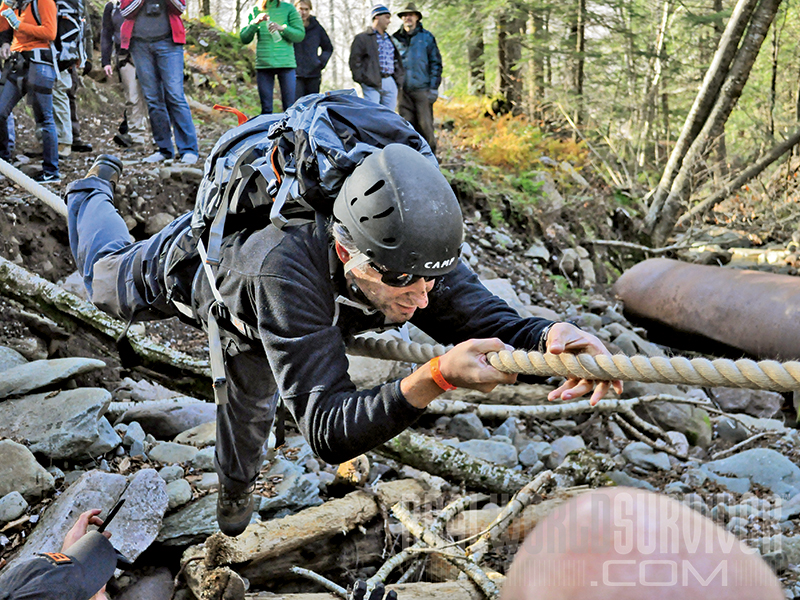 3 of 7
Navigating the Backwoods with Bear Grylls
Academy classes are physically challenging. 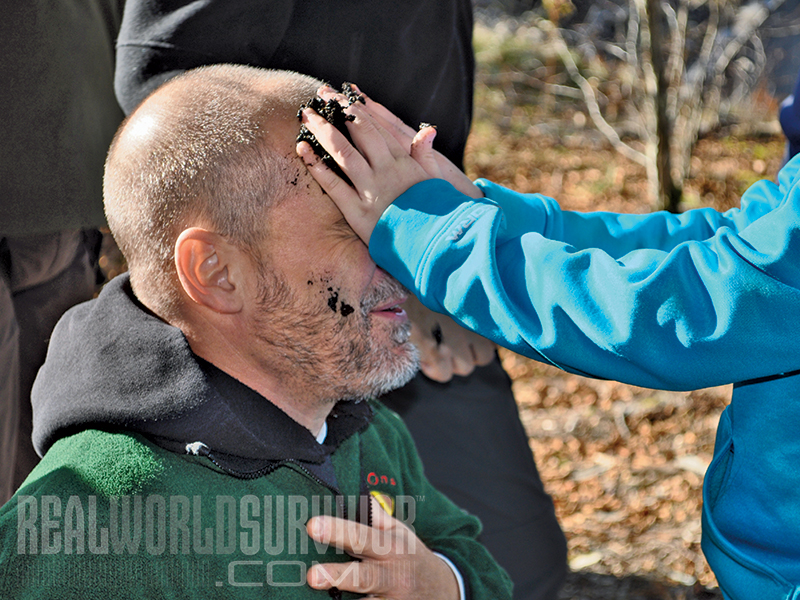 4 of 7
Navigating the Backwoods with Bear Grylls
Don’t expect to stay clean in this class. 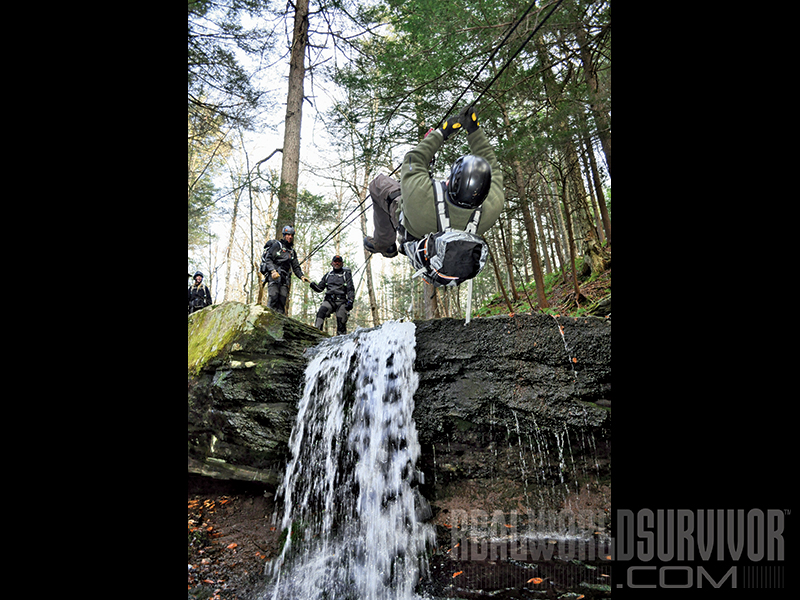 5 of 7
Navigating the Backwoods with Bear Grylls
A student learns the true meaning of “calm under pressure” as he traverses a rocky waterfall under the watchful eye of his instructor. 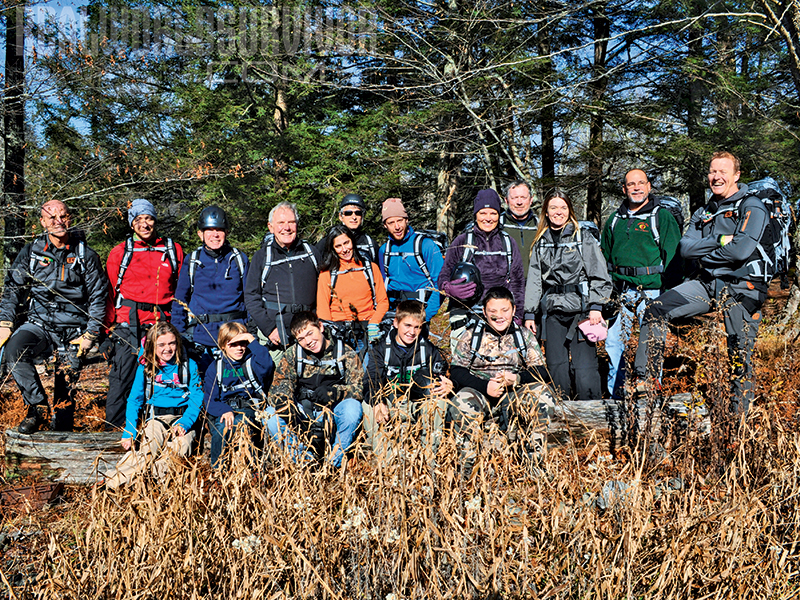 6 of 7
Navigating the Backwoods with Bear Grylls
Old and young students alike benefit from survival training. 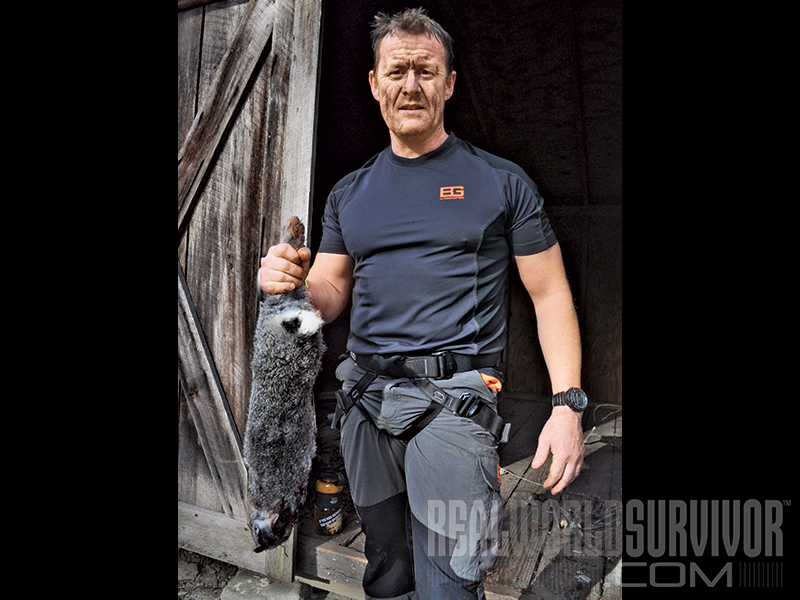 7 of 7
Navigating the Backwoods with Bear Grylls
Students learn how to trap and cook local game. 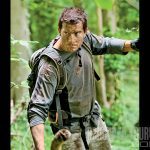 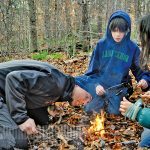 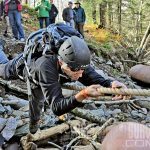 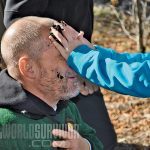 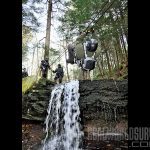 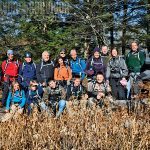 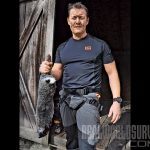 You have almost certainly seen Bear Grylls on TV swimming across icy rivers, walking down impossibly steep hills in sweltering heat, and, of course, breakfasting on disgusting bits of long-dead protein or still wriggling creepy crawlies. An Englishman, Bear Grylls grew up on the Isle of Wight, a small island and English county about 4 miles off the south coast of England. As a boy, Bear learned from his father how to climb the island’s limestone and sandstone cliffs and sail the surrounding waters of the English Channel. No doubt these skills, and a study of martial arts from an early age, helped Grylls as a young man when he joined the British Army and later applied for “selection” to Britain’s Special Air Service (SAS), where he served in the 21 SAS Regiment for three years. But the survivor lifestyle that Bear Grylls was creating for himself is literally not without its pitfalls. During a free-fall parachuting accident in Africa, his parachute ripped. He landed on his back, on top of his parachute pack, and broke his back in three places. Grylls later acknowledged that he should have cut away his main chute and deployed the reserve but thought he had enough time to fix the problem. He spent a year recovering in an army hospital, and for a time after the accident it was unclear if he would walk again.

Be sure to check out the new show Running Wild with Bear Grylls on NBC!

The incident did not, however, curtail Grylls’ spirit of adventure, and 18 months after the parachute accident he went on to scale Mount Everest and become one of the youngest climbers ever to reach the summit. Some people might have quit parachuting altogether after such a near-fatal accident, but in 2005, Grylls was back up at 25,000 feet underneath a hot air balloon in formal dinner dress with two other diners to create a world altitude record for the highest open-air formal dinner party. To train for the event, he made more than 200 parachute jumps. The event benefitted two British youth charities: The Prince’s Trust and the Duke of Edinburgh’s Award.

Bear Grylls is probably best known in the U.S. for his TV series Man vs. Wild (which also airs in the UK as Born Survivor) in which he was dropped—often by parachute—into various inhospitable wilderness areas of the world with virtually no survival equipment and a simple mission to demonstrate to the viewer how to live off the land as he made his way to civilization or a place where he could be rescued.

Man vs. Wild has been filmed in various locations around the world to demonstrate how to survive in a wide range of situations. On the Scottish coast, Grylls skins the carcass of a dead seal to create a rudimentary wetsuit. On an island in the western Pacific, he has to deal with shark-infested waters and climbs dangerously loose, crumbling cliffs before he can build a windsurfer from bamboo and sail to safety. In the Mojave Desert, he has to contend with temperatures ranging from -40 to 110 degrees and endure a sandstorm manufactured by the TV crew. One of the highlights of any episode is watching Grylls eat anything from plants and berries to maggots and live insects. Although he really does seem to have a strong stomach, he has admitted to throwing up after eating goat testicles. It isn’t hard to imagine why.

“The various classes are run by a hand-picked cadre of experienced survival instructors with SAS backgrounds who have worked with Grylls on the Man vs. Wild series.”

This brings us to a controversial issue in the TV series. Accusations were made that some survival situations in the early episodes were staged or enhanced by the film crew, and that Grylls often spent nights in local hotels at the end of the day’s filming. For a while, this created a lot of discussion about the authenticity of the various survival situations depicted on the show. The result was that the show’s producers made it clear in later episodes that the show was intended to actually demonstrate to the viewer how to survive in remote, inhospitable locations and therefore some scenes would be staged to produce the desired effect. In the end, it seems that most fans of the show understand that it’s difficult to fake jumping 40 feet into a shallow rock pool, being swept underground by a raging mountain stream or dining on a wriggling insect. So what if a sheep carcass is conveniently dumped 5 miles down the trail if it means Grylls can demonstrate how to cook it?

The Man vs. Wild series may not be the only show of its kind, but it certainly has sparked a worldwide interest among armchair survival enthusiasts, many of whom have been energized to seek out real-life training. In response to the growing interest, the Bear Grylls Survival Academy was launched in
Britain in 2012.

The 24-Hour Adult Survival Course in the south of England has an obvious goal of teaching survival skills that can save the students’ lives, but also something more subtle: development of a resourceful attitude and the ability to remain calm under pressure. Training includes foraging for food, stalking/trapping animals and preparing them for food, day and nighttime navigation, tying knots and making equipment to aid in the safe crossing of rough terrain and bodies of water. Having grown up in the south of England, I know that 24 hours outdoors can be a survival mission at any time of the year. The weather can change quickly from dry to wet, mild to bone-chilling, and calm to windy. These are all factors that can affect those who are used to living there. It can be quite a challenge for anyone who has to survive off the land. Not everyone will be physically qualified for this course. Participants must be able to jog continuously for 25 minutes, do two 90-second sets of push-ups and burpees, trek for 60 minutes carrying a 20-pound backpack and, of course, be a competent swimmer.

The 24-Hour Adult Survival Course is suggested as a good primer for the five-day Survival in the Highlands courses which are conducted on a 23,000-acre wilderness reserve at Alladale in northern Scotland. The course includes learning and putting into practice a diverse array of skills including night navigation, river crossing, ascending and descending cliffs, self-defense and self-preservation, improvised first aid, setting snares, stalking and hunting, purifying water and, of course, one of Grylls’ signature activities, building improvised shelters. These and many other survival tasks take up the first three days. Like any good class, there is a test at the end—but at the Bear Grylls Survival Academy, the test lasts 36 hours!

In addition, the recently introduced Ultimate Team Building course (motto: “Anytime, any place and anywhere, we can make it happen!”) caters to corporations and other organizations. And why not? For those of us who have endured corporate careers, who wouldn’t want to watch their boss shivering so badly that they couldn’t make a spark to light a fire?

The various classes are run by a hand-picked cadre of experienced survival instructors with SAS backgrounds who have worked with Grylls on the Man vs. Wild series. Bear Grylls certainly does attend the classes as his schedule permits, but with the growing number of classes in different locations around the world, he is prevented from being at every class.

From the five locations in Britain, the Bear Grylls Survival Academy is quickly spreading into a worldwide phenomenon.  The academy’s latest offering is a 36-hour African survival course that includes many of the training activities mentioned above, plus the Grylls signature “Gross Eat” challenge to forage for edible morsels in the African wilderness.

One of the standard procedures on Man vs. Wild episodes has been Grylls’ ability to identify and eat creatures that most people wouldn’t even pick up with their bare hands. It makes this writer wonder what a Bear Grylls fast-food restaurant would look like. The five-day “Survival in the Falls” course at Victoria Falls, Zimbabwe, takes place on the Stanley & Livingstone Private Game Reserve. It is open to adults over the age of 18. Minimum fitness levels to attend the class are the same as those listed above. The Stanley & Livingstone Private Game Reserve covers 6,000 acres. It borders the Zambezi National Park and is close to one of the seven natural wonders of the world, the famous Victoria Falls.

Bear Grylls designed the course, which will be run by his close team of highly trained survival experts. Instructor Scott Heffield works closely with Bear and said, “The greater Victoria Falls area provides the perfect backdrop for Bear Grylls Survival Academy course to launch. Topography, the rivers, the incredible Victoria Falls, extreme weather conditions and African wildlife are all important factors to consider when looking to recreate an environment that simulates real-life Bear Grylls survival situations.”

The Victoria Falls course is comprised of remote land/water survival and adventure tasks that will culminate in a wilderness expedition designed to put
the students’ newfound skills to the ultimate test. The course’s techniques include emergency shelter building, fire lighting, foraging for grubs and rodents, remote medical trauma, knife skills, a range of dynamic activities including Tyrolean traverses and scrambling, rappelling, extreme weather survival, river crossings, a white-water rafting challenge down the mighty Zambezi River and, of course, the previously mentioned “Gross Eat” challenge.

The various survival courses seem to be meeting their client’s goals. In late 2013, at a ceremony in Dohar, Quatar, the BGSA was awarded the prestigious World Travel Award for the “World’s Leading Extreme Adventure Experience” for the second year running, beating other enterprises that specialize in arctic, seafaring and desert expeditions.

Despite the obvious advantages of learning how to survive in extreme conditions, the Bear Grylls Survival Academy isn’t for everyone, but armchair survivalists needn’t despair. Bear’s latest TV show premiered on NBC in July 2013 and is titled, Get Out Alive with Bear Grylls. But for those who do want to take on the challenge of expanding their survival skillsets under the guidance of elite-level instructors, check out the Bear Grylls Survival Academy.

A total of 48 people were killed Wednesday in the TransAsia Airways Flight GE...