1 of 11
Photo by Bill Buckley
Gallatin couple
Conni and John Mahoney with their dairy goat Sipsy and faithful farm herding Collie Sami are creating their own farming lifestyle.

3 of 11
Photo by Bill Buckley
Gallatin farmstand
John helps a customer at the farm’s U-pick stand, the only one in the Bozeman area.

6 of 11
Photo by Bill Buckley
John in the field
Keeping an eye on what is happening in the field is a daily activity for John Mahoney.

9 of 11
Photo by Bill Buckley
Conni in the tomato field
Even after a devastating hailstorm, the resilient plants started producing once again. Here, Conni is busy harvesting heirloom tomatoes while John is handling the weeding chores.

10 of 11
Photo by Bill Buckley
Gallatin tomato greenhouse
The high tunnel that the Mahoneys put up creates an important growing environment in the abbreviated Montana growing season for heat-loving tomatoes.

Get inspired by the Mahoneys who keep it real, fresh and local no matter the adversity that comes their way!

When many people think of life on the farm they picture the idyllic setting of the sun casting a syrupy light on bountiful fields. Gallatin Grown, located in the Gallatin Valley near Bozeman, Montana, is as picturesque as it gets. With tidy rows of vegetables, a handful of adorable goats, a high tunnel filled with towering tomato plants and an enormous field of beautiful carrots, the farm is picture perfect.

Yet, despite the awe-inspiring setting, reality can paint a much different image, which is why Conni Mahoney didn’t originally plan to continue her family’s farming tradition.

“My dad [Walt Sales] was the fourth generation on this land,” she said. As a result, Conni knew what it meant to be subject to the whims of Mother Nature, as well as the capricious markets. Instead of heading back to the farm, she and her husband John moved to Colorado after their marriage in 2009.

“John worked at Western State College [now Western State Colorado University] in the student office. I was a bookkeeper for the public school district,” said Conni. “Life was great. We really enjoyed the outdoor lifestyle there. I did not want to move back to Montana.”

Back To The Farm

Then her father seriously considered means to make the farm viable for the future. Walt worked with Chaz Holt, production manager at Towne’s Harvest at Montana State University, a project that is striving to develop practical techniques and viable methods for small farms, including value-added products. Chaz and Walt devised a scenario where it would be feasible for a small section of the farm to support another family.

When her father asked if any of his children were interested, Conni’s siblings immediately declined the offer. Her husband, John, on the other hand, was intrigued.

Bozeman has an exuberant, food-oriented population that takes pride in products grown in Montana. The popular farmers markets create a connection between the growers and residents, and farm-to-table events have developed relationships even further. But the bottom line is that farming is still farming, which is a fickle business.

“I was not into it at all. I knew the realities of it,” Conni said. Yet, after making the call to move back to Bozeman, Conni said the enthusiasm caught up with her. She became excited about the possibilities.

Walt and Chaz planted 8 acres in the spring in anticipation for their return. In July 2012, Connie and John made the leap. “We got back on a Sunday night, and Monday morning we were weeding,” she said. Chicken Scratch: Your Poultry Farming Questions Answered!

The first year their primary focus was to learn absolutely everything possible. Not only did they have to grasp the day-to- day tasks of growing food, they needed to develop markets to sell the produce. This was far different from the conventional approach to farming.

Cold calling potential customers isn’t what a lot of farmers consider enjoyable, yet for Conni and John it meant building the foundation of their clientele. “That was terrifying,” said Conni, but with her background in business, she tackled it head on.

Conni knew what they had in the fields; however, when customers asked how many pounds were available, when it would be ripe or even the prices, these were questions she didn’t quite know how to answer.

“The learning curve was huge. I feel very blessed that people were very patient with me,” she said, laughing.

But by the end of the season, she had a firmer understanding about what they had and how to present the options to customers. At harvest time the acre and a half resulted in over 600 pounds of carrots, and she could finally see what amounts the other vegetables produced as well.

“It was nice to have some tangible numbers,” she said. This was a big step in solidifying their viability as  local growers focusing on the needs of an expanding customer base wanting quality organic food from the area.

With that first season under their belt, Conni and John planned for 2013 with high hopes. It was their first year anticipating what their markets needed, deciding what to plant and mapping out the garden all on their own. They planned for a U-pick section, as well as bulk sales. “It was fun and exciting…until the hail came,” Conni said.

In July, a devastating storm swept through the Bozeman area. Conni was away from the farm, but she knew it was bad. “I remember calling John. He said, ‘It’s gone. It’s all gone.’”

Within a half an hour the fields looked like someone took a weed-whacker to all of the plants.

Yet, the crops were surprisingly resilient. Conni said the vegetables were smaller since the plants expended so much energy repairing themselves, but they realized that they would have a harvest for their customers. As the plants grew and started producing, the couple amped up for their markets.

Then the spots arrived. They were on everything. It wasn’t like a disease situation that attacked specific varieties. Tomatoes, cucumbers, peppers and everything else had sickening speckles.

Conni and John immediately stopped sales. “We didn’t know what it was,” Conni explained. They took samples to the Schutter Diagnostic Lab at Montana State University and, upon first glance, a lab technician asked if someone had sprayed Paraquat. He wasn’t far off base. The harvest aid used to kill chickpeas in a neighboring field had drifted over to the Mahoneys’ fields and it was enough to affect everything.

As a result, all of their markets decided to pass on the produce and they lost two years of growing in their effort to obtain organic certification, which requires that no non-approved pesticides be used on a growing area for three years.

“That was far worse than the hail storm because it was man-caused,” admitted Conni.

Their story is similar to the Three Bears: The first year their garden was excellent, but the markets lagged. The second year their markets were in order, yet the crop was a near total loss. Conni is pinning her hopes on the third year to be just right.

Related Stories: Pickling and Fermenting: How to Preserve Your Harvest

While these disappointments might have devastated less hardy stock, Conni and John have taken them in stride and are ramping up with more experience under their belts.

The U-pick portion of their farm primarily caters to people who preserve their own food, so cucumbers and beans are a couple of their most popular self-harvesting varieties. And tomatoes in the high tunnel remain another important crop.

The area’s farm-to-school program is an opportunity where they really shine. Conni has roots in school lunchrooms. “Before bookkeeping, I was a lunch lady,” she said. She knows what it takes to prepare meals for hundreds of students, particularly when it involves bringing in food that requires more care.

She started by cold calling schools to talk to them about the possibilities. Now she’s a member of the Gallatin Valley Farm To School Program to help schools put programs in place to provide local vegetables to their students.

Conni sees the possibilities of providing fresh vegetables to the university and schools not only as a healthy addition to meals, but as a means of teaching students and teachers.

“The education aspect is something that John and I really enjoy,” she explained. “We can educate ourselves and others about their food choices.”

Local food is a benefit to the economy, is more nutritious and tastes better than trucked-in produce. Conni said she loves it when she has people try fresh food from the garden and it brings them back to a time when they remember how flavorful vegetables truly are.

Farming is a challenge on its own, yet there are aspects beyond the field and market that many new growers don’t consider.

“The hardest thing for us is balancing farm time and recreation,” explained Conni. “Farming is a lifestyle, so it’s different than a 9-to-5 job where you can shut off your brain. Something always needs to be done. Some nights we’re out with the head lamps picking beans.”

When they lived in Colorado, Conni and John regularly took off on their bikes or could easily head to the trails for an after-work hike. Despite living in one of the most beautiful regions in this country, it’s hard to pull away.

“When we do have time off we generally are very tired, or we don’t want to go back outside. We want to be inside where it’s cool,” she laughed. “We’re still trying to find that balance. You need to because you’ll go crazy.”

Just like every dedicated farmer, Conni and John look forward to the new season after a long winter of planning and waiting out the cold weather. John, who also worked as a hired hand for two outfits for the past couple of seasons, is now able to focus completely on Gallatin Grown.

Between guiding people in the U-pick section of the farm or delivering fresh produce to local schools, Conni said, “The rewards are so great. That’s what gets us motivated to try again.”

This article originally published in THE NEW PIONEER® Fall 2014 issue. Print and Digital Subscriptions to THE NEW PIONEER magazine are available here. 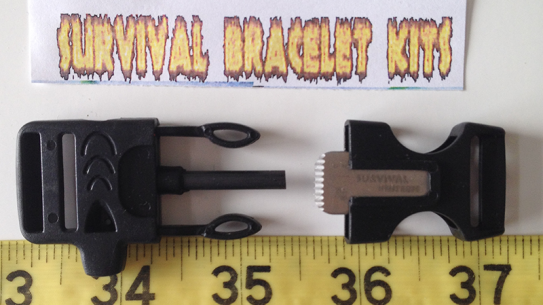 How to Make Quick Fire with X-Cords’ Fire Starter Buckle

The all new Fire Starter Buckle from X-Cords features a hidden flint on one...