1 of 16
MD Provincial Forces
The fort being manned by reenactors portraying members of Alexander Beall’s and Joshua Beall’s companies of MD provincial forces.

3 of 16
Taking the Watch
Fair Participants guard one of the fort’s entrances.

4 of 16
20th Anniversary Medal
2014 marked the 20th anniversary of the Fort Frederick Market Fair. To commemorate the milestone, the Friends of Fort Frederick, who organize the event, issued this medal.

6 of 16
Friendly Neighbors
Our camping neighbors, Steve and Deb, are frontier reenactors.

9 of 16
Custom Guns
Custom flintlock gun builders are also well represented at the Market Fair. Here, master gun builder Alan Sandy displays a beautiful recreation of a Manton, London Best double-barrel shotgun, that he built. The price is $12,000. I have no doubt he’ll get it easily for this gorgeous gun.

11 of 16
Wigging Out
Embracing all aspects of the colonial era, including the fashion, is a large part of the market fair experience

12 of 16
The Royal Treatment
This fair-goer choose to travel is style.

16 of 16
Shooting Bag and Powder Horn
The author did some shopping at the Market Fair. He picked up a shooting bag from Pepe’s Possibles and a powder horn from Old Dominion Forge.

Those of us who enjoy reliving the 18th-century lifestyle are generally forced to shop online for the period-correct gear we need. But not everything can be found online, and there are some items that we just hate to buy unless we have handled them in person first. But it is impractical to gallivant around the country seeking out far-flung craftsmen. It is much better to gather those vendors and craftsmen in one place, ready for business.

During the era of the Rocky Mountain fur trade, these gatherings were known as the “rendezvous.” Mountain men would gather from the far corners of the west to purchase the goods they needed for another year in the wilderness. It was also an opportunity to reconnect with old friends, and to enjoy some carefree entertainment before returning to the mountains for another year of hard, dangerous work. The modern rendezvous serves the same function for fur trade-era reenactors, but for those of us who favor the colonial era, there are market fairs.

One of the best-known modern market fairs is held in April each year at Maryland’s Fort Frederick State Park. This event celebrated its 20th anniversary in 2014. It draws vendors and participants from all over the United States. When it began in 1994, the Fort Frederick Market Fair had much more of a rendezvous flavor. Participants portrayed time periods from the 1600s through the end of the mountain-man era in the 1840s, and even Plains-style teepee camps were common. But, in 2003, responsibility for organizing the event shifted from a regional blackpowder club to the Friends of Fort Frederick. The Friends decided to honor the history of the region and limit the time period for portrayals to the 18th century.

The Fort Frederick Market Fair is a juried event. So, all the clothing, camping gear and equipment used by participants must be appropriate to the time period from 1730 to 1790. And vendors must also meet those standards, both in their clothing and equipment, and in the wares they offer for sale. First-time vendors are vetted in advance by the Friends of Fort Frederick Trade Committee before they are allowed to attend a Market Fair.

The 18th-century timeframe is certainly in keeping with the event’s venue. The centerpiece of Fort Frederick State Park is a massive stone fortification that was built in 1756, after the defeat of General Braddock exposed the western colonial frontier to depredations by the French and their native allies.

Fort Frederick was one of the largest frontier fortifications built during the French and Indian War. It occupies an area of 1.5 acres, and it was built to stand up to a major military assault. The fort’s massive stone walls are 4.5 feet thick at the base. Inside the fort, two large barracks buildings face each other across the parade ground. The fort is open and inside the walls you can tour the two barracks buildings. They are furnished with sleeping quarters, workshops and offices, just as they would have been during the mid-18th century.

During Market Fair, a contingent of reenactors portraying French and Indian War-era Maryland provincial troops man the fort, live in the barracks and provide interpretive events for visitors. These men portray members of Alexander Beall’s and Joshua Beall’s companies of Maryland forces. During the Market Fair, the troops have a schedule of exhibitions that they perform. You can watch marching demonstrations, flag-raising ceremonies or demonstrations of 18th-century military music.

Market Fair also serves as one of the largest gatherings of Rogers’ Rangers re-enactors. Roger’s Rangers started as an independent company of light troops. Their job was to serve as scouts and skirmishers that operated well forward of conventional troops, harassing the French and securing intelligence. They performed their work so well that, by the end of the war, Robert Rogers was a major leading a small battalion of his Rangers, and the Rangers were the chief scouting unit for the British forces. Rogers’ Rangers are the direct ancestors of our modern U.S. Army Rangers.

Today, Rogers’ Rangers are primarily reenacted by members of Jaeger’s Battalion. Jaeger’s Battalion is a national, colonial period historical reenactment group headquartered in Grand Rapids, Michigan. This is one of the oldest reenacting groups in the country. The battalion serves as the umbrella group for the various state-based Ranger companies. At the Market Fair you will usually see Battalion Adjutant Bill Blair leading companies from Virginia, Maryland and Pennsylvania, and sometimes companies from much farther afield. I’ve seen Ranger companies from as far away as Mississippi and Michigan attending.

The Rangers provide a valuable service to the Fort Frederick Market Fair. Each year, they run the park’s rifle range, giving us an opportunity to exercise our flintlocks. The Rangers’ battalion surgeon is a registered nurse who is also a certified EMT. He provides emergency medical assistance to campers and visitors to the Market Fair.

Civilian reenactors and living historians come in every type that you could have found in 18th-century society. Most of the campers portray typical frontier types, dressing and equipping themselves as hunters or scouts. But there is also a large contingent that prefers to portray the higher strata of colonial society. So, among the rough-and-tumble hunters you’ll find powdered-wig aristocrats and evening-gowned ladies. There are also quite a few people portraying Native Americans.

The fort and the military reenactors are interesting, but there can be no question that the main draw at Market Fair is the vendors. During the 2014 edition of Market Fair, over 140 vendors set up shop selling 18th-century goods. Events like this are essential to reenactors and living historians who need to outfit themselves with period-correct gear. Let’s face it, you can’t walk into Sears and buy an 18th-century waistcoat and breeches. But, at market fair you can saunter into the Ft. Downing Trading Company tent and buy 18th-century apparel right off the rack. And, if you can’t find what you’re looking for, they can measure you and sew up some custom tailored apparel.

These days, you can shop for quite a bit of period-correct gear online. I do it myself, particularly for muzzleloading shooting supplies. But for lots of things, especially big-ticket items or handcrafted items, I feel a lot better if I can hold the item in my hands. Fort Frederick’s Market Fair hosts a wide array of skilled craftsmen. There are several blacksmiths at the event making ironware on the spot, or repairing your broken items. This year I watched a silversmith resize a ring for a customer on the spot. There are furniture makers, cabinetmakers, gunsmiths, hornsmiths and leather workers, all plying their trades at Market Fair.

In addition to craftsmen, there are vendors who offer the full range of 18th-century essentials. At Market Fair, you can fully outfit your person with 18th-century apparel from several excellent tailors. You could also buy every item you would need to outfit a comfortable camp, from the tent all the way down to a colonial pot scrubber. And you can pick up all the muzzleloading gear you need, from a custom rifle or musket to a handmade powder horn or a custom shooting bag. And, if you don’t need any big-ticket items, you’ll find a full range of small items like cleaning jags and forged screwdrivers.

Besides the formal vendors, you’ll find lots of interesting gear for sale on informal trade blankets. Any camper can set up a blanket in front of their camp and offer goods for sale to passersby. Some of the best bargains you’ll find at Market Fair will be on trade blankets.

Over the years, I’ve bought a lot of my gear at Fort Frederick’s Market Fairs, and this year was no exception. Shortly before Market Fair I finished building a new flintlock longrifle, and every rifle deserves its own shooting bag and powder horn. Finding them was my mission at the 2014 Market Fair, and it was a successful mission. In short order I found a nice little bag with a red heart cutout made by Dave Kazmark, a.k.a. “Pepe,” at Pepe’s Possibles.

The horn was a little harder to find, not that there weren’t plenty of great ones to choose from. There are several top-quality hornsmiths plying their craft at Market Fair. I saw some great horns, but none of them spoke to me. Then, on the last day of the event, I saw just what I was looking for. It is a fairly simple horn made by Carl Willyard of Old Dominion Forge. It is carved with an 18th-century Pennsylvania Dutch floral motif. As soon as I saw it I knew it was going home with me.

The shopping is fun, and the history is interesting, but the best thing about the Fort Frederick Market Fair is the people you meet there. By camping at Market Fair you get to meet some really interesting people. Some of them are real characters, like the guy who gets carried around the park in a sedan chair by liveried footmen, or the wig couple. They have huge elaborate wigs that are based on the satirical 18th-century cartoons that lampooned what was called “Macaroni Fashion.” But mostly I like evenings in camp visiting with like-minded people. The 21st-century fades from view, and we enter a simpler time where good conversation, either face to face or around a cheery campfire, provides a human connection that you’ll never get from a smartphone. That’s the best part of Market Fair. 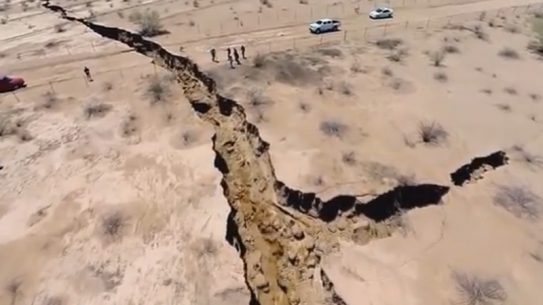 WATCH: Giant Half-Mile Crack Appears in the Earth in Mexico

Incredible video footage has surfaced showing a massive crack in the earth located in...