1 of 6
Photo by Paul Calle
Storyteller of the Mountains
There was a time, deep in the woods, along icy streams and meadows, when trapper camps were filled with songs, stories and tales as trappers vied with each other to embellish the life of the mountain men who roamed over the vast expanse of wilderness in pursuit of beaver. When the day’s work was completed, the long evenings and nights were spent in snug lean-tos around roaring fires as the trappers engaged in debates and friendly arguments in what was referred to as the Rocky Mountain College. Editor’s note: For more information about Paul Calle and available art prints, please visit calleart.com.

2 of 6
Photo by Thomas Kirchen
Coyote Trails shed
Not all mountain man caves are created equal. The screened-in beauty shown above comes from Coyote Trails School of Nature in Forest Park, Oregon. The cedar-post uprights were set in concrete and the aluminum roof is being held up by scrap 2x4s. For more on Coyote Trails’ overnight and day classes where you’ll learn to build all kinds of primitive things—and build up your bank of outdoors knowledge—visit coyotetrails.org or call 541-772-1390.

5 of 6
Photo by Michael DelRizzo Illustration
Post-and-Board Shed
An artist’s rendering of the author’s post-and-board shed.

6 of 6
Rear Locust Post
The back corner of the woodshed’s rear locust post is buried in the ground. The rough sawn boards make up the sides

In the Great Smoky Mountains the saying was always, “Make do or do without.” When farm buildings were needed, a cheap and serviceable design was the “post and board” building. These were generally nothing more than some old-growth locust logs sunk into the ground for posts with rough sawn lumber nailed between them for walls. Simple, cheap and quick to put up, they ranged in size from simple woodsheds to larger cattle sheds, open sheds for tractors and farm machinery and even full-size proper barns. A simple open woodshed required only four posts. Add a doorway and you need to add another post or two. Longer walls just mean more posts and more rough sawn boards connecting them. As long as the boards were sawn from local, old-growth timber they would last for decades, even without paint. The same cannot be said for the smooth-finished tree farm lumber you buy from the building supply houses today. It rots fast because the wide gaps in the growth rings absorb and hold more water than the narrow, dense rings of old-growth wood.

A good example is my old woodshed from the 1930s. Admittedly, it has seen better days, but it still works fine for me. It began when four locust logs were set in the ground as posts. Back then there was an old stump used for a chopping block in front of the woodshed, but it has since rotted away. Once the posts were up, rough sawn wood planks were nailed between them on three sides, leaving the front open. To keep the unsupported walls from bowing out, small cross boards were added to the outside.

The front posts were left higher than the rear posts so that there would be sufficient slope to the shed roof. Two more locust logs were flattened on the end to make crossbeams across the tops of the four vertical posts. These were nailed in place and then small logs were run from the beam across the rear of the shed, to the front beam, and nailed down. Small boards went across these, from side to side, to provide a nailing surface for the cedar shake roof. Both the woodshed, house and barn originally had split cedar shingles but we upgraded to a tin roof in the 1950s. It is important to note that nails were the only hardware that went into this building. Compare this to what a commercial builder would rip you off for to build a woodshed.

My simple woodshed shows all the basic construction techniques, but they can be expanded for other farm buildings. An open-roofed shed for a carport or a long-roofed shed for tractors, cars or other vehicles just requires more length. I have had some of my neighbors insist that things rust less in an open shed than one closed up because a closed shed holds the dampness. Since we are in the Appalachian rainforest, that rings true. One local mountain woman once said that if there was any chance of rain during the rainy season, it was definitely going to rain. I have found that to be true in my county.

Step Up Your Game

A cow shed is just a bigger version of a woodshed with doors and often center posts to support the longer shed roof. A barn can be considered to be a row of co-joined shed walls with stable doors in front, with another row of walls facing them. Instead of a slanting roof, the top logs across the posts become the foundation for the flooring of a hayloft and a proper gabled roof. This roof is also made of poles from the woods instead of expensive store-bought beams. Having a local sawmill rough saw some old-growth wood for you will normally be cheaper than the planed wood from the tree farms you get at the building supply house, and it will also last a lot longer than that new-growth wood.

Be sure to leave a place to throw hay from the loft directly through a hole in the loft floor, into the feeders for the livestock. These take the form of poles at a 45-degree angle coming out from the outside wall and going up to the ceiling. Leave plenty of room for the livestock to get their heads between the boards, and run a few horizontal slats at the bottom to help hold the hay in. This makes feeding a whole lot quicker and easier. Keep at least one stall for a corn crib, and make sure that the gaps in the boards are big enough for the cats to get through to the rats and mice. Cats are essential on a farm. Always feed them plenty of proper cat food. They don’t catch more vermin when they are hungry; they actually catch less.

At the front of the hayloft be sure to have the main roof beam sticking out enough to take a pulley so you can get hay bales in the loft efficiently. Loose hay can be placed in a tarp with ropes through the grommets at the corners, allowing your pulley’s rope and hook to draw the whole thing into a net affair that you can get up in the hayloft with minimal effort.

A barn like this costs relatively little to build, whereas I have seen contractors try to charge city folk new to the country the price of a good house just to build a barn. Profit margins on farms are small to non-existent and leave no room for high-priced contractors. If you want to make it on a farmstead these days, look to those who survived on their farms during the Great Depression and do as they did. Above all, don’t spend any money you don’t absolutely have to and don’t borrow money. These old-fashioned buildings may look crude but they can help you survive life on the rural ’stead. Remember, “Make do or do without!” 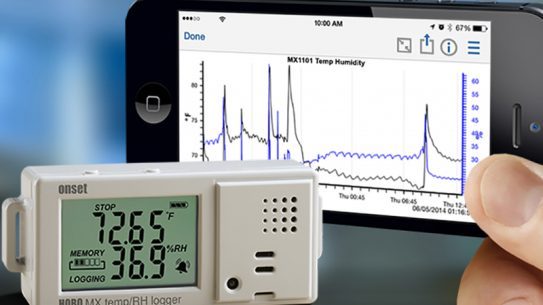 The HOBO MX1101 from Onset measures and transmits temperature and humidity without the use...