1 of 8
BEWARE BEFORE YOU LYE!
1) Keep children out of the area until you are done working with lye and it’s all washed up. 2) Always work with very good, as in positive, ventilation. Note: if you drop lye solution on a hot stove, it drives off the hydrogen and makes sodium peroxide. Sodium peroxide sublimes (goes to a vapor) instantly on a hot stove, and if you breathe it, as soon as it hits the moisture in your lungs it reforms as, yup, lye…in your lungs. Lye is strongly corrosive and just about instantly scars any living tissue. 3) Face protection is great! But Murphy is greater. If (when) you get it in your eye as solution or crystal (or even sodium peroxide vapor) you have split seconds to react. And the reaction of choice (per OSHA, MSHA etc.) is a gently pressurized flow (think spray bottle always kept in the “on” position) of common vinegar. Splashes on ordinary skin, no big deal, just quickly wash it off—but in the eye there’s no coming back if you don’t move fast and decisively.

2 of 8
Melting Lard
Carefully measured fat and water are heated until the fat forms a puddle on the water.

4 of 8
Saponfication taking place in the pot
Lye and water mixture is slowly added to the kettle of fat and water.

5 of 8
Cutting jewelweed
After the lye/fat mixture has thoroughly mixed, herbs or medicinal plants can be added.

6 of 8
After an hour jewelweed is added
When the soap flows off the stirrer in sheets, it is ready to go into the mold to cool and cure

7 of 8
Finished soap going in the mold
Pour the thickened soap mixture into molds or pans lined with freezer paper.

There was a reason why pioneer women had such soft skin. Their weapons against wrinkles and dry, cracked skin were protection from the sun and hot-process lye soap. Even before the first recorded history, lye soap was being made and used.

Fall in pioneer America was followed shortly by lye soap making. The annual rite carried on well into the 20th century. The soap recipe was simple. Mix lye with melted fat over a low fire and slowly cook the combination until the water evaporated. What remained was lye soap. The process hasn’t changed much—anyone with a big pot or a slow cooker can make their own.

Linda Odom spends five days a week from April 2nd to November 30th at the Ozark Folk Center in Mountain View, Arkansas. She makes and sells lye soap and other unguents, and talks to people from around the country and around the world about traditional soap making.

Linda, the proprietress of The Village Apothecary Shop, obviously enjoys sharing her knowledge. Her husband Troy, who runs The Print Shop at the Folk Center, helps make the hundreds of batches of soap that are sold to visitors each season. Linda also teaches classes on soap making through the Ozark Folk School, or to individuals by request.

On the day I watched Linda make a batch of jewelweed soap, the temperature soared to 101 degrees. She stayed with her big iron kettle for the five hours it took to finish the batch. Hot-process soap making isn’t difficult, but it is time consuming, and the measurement of ingredients needs to be exact. Large batches over an open fire are definitely best done in cool weather.

As she waited for the flames under her pot to melt the 4 pounds of lard floating on 2 gallons of water, Linda talked about the pioneer traditions of soap.

“Soap making almost always took place in the fall after hog killing,” Linda said. “Fat from the freshly killed hogs was rendered down for cooking, storing food and other family uses. It was too valuable to be turned into soap. Lye soap was made from the old fat that was left in the crocks at the end of the year.”

Before homes had refrigerators, cooked chickens, pork or other meats were packed in big crockery pots and covered with lard. The fat formed a protective barrier that kept the meat from ruining. This fat was later used for soap making.

After about 20 minutes, the water was gently bubbling and the lard had turned to a clear puddle floating on the water. Troy measured out 8 ounces of lye and added it to cool water in a plastic pitcher. (Lye reacts with metals like aluminum. Stick with plastic, glass or stainless steel.)

“Never pour sodium hydroxide (lye) on hot fat,” Linda cautioned. “It can explode. Instead, thoroughly (and slowly) dissolve the lye in water (into plastic that will stand boiling water—most Tupperware-type products will) before adding it to the hot mixture, and let the lye and water cool to around 100 degrees.”

She added the lye and water to the fat and water in the kettle, and the process of evaporation began. Linda used a small wooden paddle to stir the mixture in the kettle to prevent separation.

“After a few minutes of stirring, the lye, water and fat turns into a brownish, soupy mix,” Linda pointed out. “This is called saponification. It is a chemical reaction that occurs when oil or fat is mixed with a strong alkali. Once this happens, the lye is no longer dangerous. [Editor’s note: In very old soap—as in, years old—lye in soap can precipitate and form new little nodules of lye. It’s still good hand soap, or laundry soap if you shave it, but you wouldn’t want to use it on your face!) After the evaporation is complete, the end result is soap, and glycerin is a by-product. Commercial soap makers separate the glycerin and sell it separately. We leave it in our soap because it has additional skin benefits.”

Linda stirred the mix about every 15 minutes. If it isn’t stirred, she explained, the water separates from the fat. After letting it cook for an hour, she added fresh jewelweed that she had picked and cut up that morning. Very occasionally, Linda or Troy added a new chunk of wood, or spread the fire out more evenly. It was easy to imagine folks sitting, stirring and chatting 150 years ago just like we were doing on this hot June afternoon.

Tourists in shorts and tank tops fanned with anything handy, and asked questions about the history and how-to’s of soap making. Linda, in her long period dress and apron, answered and explained the process.

“Lye soap helps take the itch and redness out of poison ivy, and jewelweed poultices were an herbal remedy to keep down the blistering and swelling,” Linda said. “Combining the two makes a soap that is excellent to remove the ivy oil from skin and keep the rash from spreading. But it does more. For many people, it makes the itch go away after a few days, instead of the usual two weeks or more. Just dampen the soap and rub it on the itchy places.”

“One of the advantages of making hot-process soaps is the variety of things that can be added to make the soaps provide more benefits,” Linda said. “The disadvantage is that they don’t hold colors or scents very well.”

In the Apothecary Shop, there is a wide selection of lye soaps and skin creams. Gardener’s Supply hand soap shares shelf space with rosemary-, cedar- and peppermint- infused soaps.

After four hours of cooking, the batch of soap looked like thick split-pea soup and was almost ready to go into a mold.

“When the soap sheets off the paddle, instead of just dripping, it’s ready,” Linda said. “Once it’s cooled it will take two or three weeks to completely harden. The mold I use already has dividers so that each bar will be the same size. Most people use a rectangular cake pan or a wooden box lined with freezer paper and cut the soap with a knife.”

Using a giant ladle and a pitcher, Linda quickly poured the cooling soap into the mold. The excess soap was ladled into other containers, to be cut into bars by hand after it fully hardened.

“The soap needs to be covered so it can cool slowly,” Linda explained. “This aids in the hardening process.”

With her work nearly complete, Linda paused for a moment, wiped her brow with the back of one hand and smiled. “It never ceases to amaze me,” she said, “that it is possible to take something as nasty as fat and as caustic as lye and end up with them making a nice mild soap.” 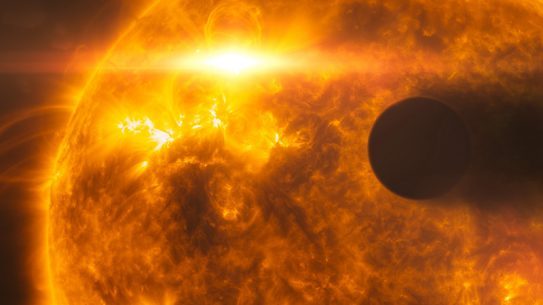 A series of solar storms is expected to hit Earth Saturday after two recent...