1 of 8
Henry Survival Rifles
Henry’s trim and lightweight U.S. Survival AR-7 can be the one that’s there when you need it.

2 of 8
‘Last-Ditch’ Rifle
The “last-ditch” rifle goes from 35 inches long down to 16.5 inches when stowed in a backpack.

3 of 8
Backpacker’s Delight
A backpacker’s delight, the U.S Survival Rifle fits neatly in a pack, functions as its own carry case, and opens up easily into a handy small-game getter when conditions dictate.

4 of 8
AR-7 Profile
The AR-7’s design takes the “keep it simple” mantra to the max. Profiles show the bolt handle and pivoting safety

5 of 8
Simplicity
The sights are very basic

6 of 8
Versitility
Henry’s version of the 1950s-era design adds an optic rail on top for more versatility.

8 of 8
Third Magazine
This Henry Survival Rifle has room for an optional third magazine that allows up to 24 rounds to be carried inside, ready to go.

Survival, like politics and religion, means many things to many people, and the description of a survival gun can be equally varied. In conversing about a survival gun there’s always the need to define exactly what the gun is supposed to help us survive. In a non-combat/non-tactical context, the survival gun is typically one that either feeds us or fends off predators interested in feeding on us, and the lowly .22 Long Rifle does a bang-up job (literally as well as figuratively) in the first category, with some spillover into the second.

While it’s more than a shade illegal nowadays, game animals up to the size of mule deer have been taken with the humble rimfire round over the years, and an uncle long since passed on to happier hunting grounds used to occasionally (and guardedly) talk of leaner and hungrier days on the farm when the .22 kept his family in venison during the colder seasons. Today that would be considered poaching, but back then it was just called everyday life, and the old, well-worn rifle he used was very much a survival gun for him.

In more modern times, the .22 LR remains a great caliber choice for a survival tool. It offers enough power to take down a variety of edible game, from squirrels to rabbits through frogs and turtles and on up to a number of wild game birds and the aforementioned deer, if circumstances demand it and you and the gun are up to the job. It’s less destructive on meat than high-powered centerfires and much quieter in terms of spooking less wildlife in the vicinity. It’s also much easier on the shoulder for anybody and everybody to shoot, and since the mild-mannered round is so un-intimidating, it’s easy to teach just about any newbie how to shoot a rimfire rifle decently well, without flinch and without the “But it’s loud and it hurts!” commentary. It’s also much cheaper to stock up on than centerfire ammunition, and a full box of 50 takes up less than half the room in a pocket or pack than a typical 20-round box of centerfire rifle rounds. Where space and weight are considerations, the .22 LR rifle will be lighter and you can easily carry better than twice the ammunition for the gun. Get yourself into a takedown version and the .22 really shines as a survival option.

The obvious star of this show is the AR-7, currently manufactured by Henry Repeating Arms. Originally designed by Eugene Stoner (yes, the father of the M16 family) during his days at the old ArmaLite company, the unique self-stowing takedown semi-auto .22 was itself based on the earlier bolt-action AR-5 chambered for the .22 Hornet, which was also designed by Stoner and accepted as a pilot survival rifle by the U.S. Air Force in 1956. The acceptance didn’t amount to much in reality; the guns were never ordered in quantity, but ArmaLite used some of the R&D and manufacturing processes to develop the semi-auto rimfire AR-7 for the civilian market in 1958. After ArmaLite ceased production of the model in 1973, the gun was manufactured by Charter Arms from 1973 to 1990, produced by Survival Arms from 1990 to 1997, and then picked up by Henry Repeating Arms in 1998. Henry’s been offering the gun ever since.

The AR-7’s role in life was never intended to be a heavy duty hunter, a Creedmoor target rifle or a high-volume plinker; it was designed to be a last-ditch, keep-me-alive-till-the-cavalry-gallops-over-the-hill proposition, and to break down into a small enough travel package that it was likely to be tossed in a pack, plane or other confined space and taken along when bigger guns got themselves left behind. Where other takedowns still need a carrying case of some sort to contain the two separated halves, the AR-7 is its own carrying case.

Today’s Henry Survival Rifle differs slightly from earlier editions. Company president Anthony Imperato says the Henry U.S. Survival AR-7 was reverse-engineered when first developed, not just carried over line-for-line from the previous maker, with a chief concern being that it actually functioned. I had a toy version of the bolt-action AR-5 back in 1961, and thought it was a cool idea. Twenty years later, I bought a real AR-7 because I still thought the idea was cool, but I ended up returning it to the dealer after one range session where it tried to go full-auto, when it ran at all. That left a bad taste concerning the design that took over 30 years to overcome, but Imperato’s done it.

The current Henry U.S. Survival AR-7 is a semi-auto blowback .22 LR package that breaks down easily and quickly into its components. The receiver is held in the hollow stock by a large, finger-operated retaining screw, and the 16-inch barrel attaches via a knurled screw-on collar that mates with the threads at the front of the receiver. The standard eight-round steel magazine locks in securely and releases by a substantial tab inside the oversized triggerguard forward of the serrated trigger itself.

To take down and stow the AR-7, you  retract the mag, clear the chamber, unscrew the barrel collar, remove the barrel, unscrew the action retainer in the stock, lift the entire action out of the stock, pop the buttstock “cap” off the rear, insert the barrel and action into their respective molded compartments inside the stock and snap the cap back on. Among the subtle refinements over previous makers’ AR-7s, this Henry has enough room inside the stock to let you leave a mag inserted in the receiver, along with slots for two spares. Older variations had to have the magazine removed from the action before stowing, and didn’t have room for a total of three inside the stock. The gun ships with two eight-round magazines, and besides selling those separately for $19.95 each, you can also order five-round magazines at the same price.

Controls are simple—the gun uses a “telescoping” charging handle on the right side of the receiver to cock it, with a sizable stamped pivoting safety lever also on the right side. The charging handle is designed to pull out to full extension when it’s needed, and to rest in a collapsed position (mostly inside the action) to fit in its recess in the stock when it’s not. The safety’s easy to find and use: back is on, forward is off. The sights are extremely basic as the front is a one-piece, orange-molded-plastic unit dovetailed into a ramped base for windage, and the rear is a thin horizontal piece of stamped steel with a larger aperture at the top, a smaller aperture at the bottom, and a retaining screw halfway down. You adjust for elevation as necessary by loosening the screw slightly, sliding the sight up or down appropriately, and re-tightening the screw. You swap aperture sizes by removing the screw and sight “plate” entirely, and re-installing the plate with the smaller hole on top.

The entire package weighs in at 3.5 pounds unloaded, with an overall stowed length of 16.5 inches that opens up to 35 inches fully assembled. In line with its intended role, the Henry U.S. Survival AR-7 uses alternative materials that include a tough ABS plastic material in the stock that resists heat and cold extremes, an alloy receiver, and a steel barrel insert inside an ABS sleeve. The hammer, trigger, extractor and ejector are stamped, and the magazine latch is metal-injection molded. In the case of the camo model I tested, the pattern’s
a film application.

On a moderately overcast day in early winter, the little Henry was a pleasant surprise. Shooting four different loads (three high-velocity and one standard velocity) off a sandbag at 50 yards, the sights took some getting used to, with that front blade standing brightly out against any and all backgrounds, light or dark, but not giving a clear definition in something of an orange glow. However, with elevation set to point of aim (POA) right out of the box, it produced best five-shot groups between 2 and 4 inches without much effort, centered roughly an inch to the right. The windage would be easily correctable, and the gun’s 50-yard accuracy was more than adequate for small game uses. If those sights aren’t quite up to your expectations, by the way, the Henry features an optic rail, and they can also provide a black front blade if you prefer one. The surprise, though, was in its reliability, which was 100 percent, including even the standard velocity CCIs. Previous AR-7s have acquired a rep for ammo sensitivity, but if this test sample’s representative, that problem seems to be gone.

All in all, if you understand the AR-7 and what it’s made to do, it’s a good option for those times and places where your favorite plinker or target gun can’t make the trip, and I can easily see it traveling along in my backpack, ATV or truck on remote expeditions, summer or winter, either ground-bound or airborne. 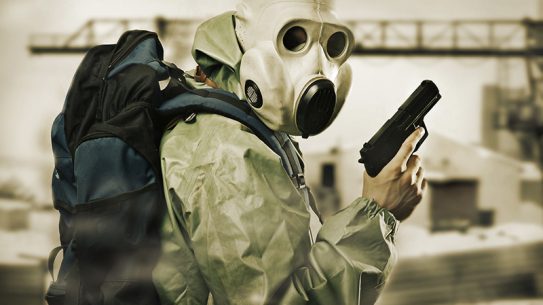 Beat the odds with this prepper’s guide for long-term survival with tips to take...