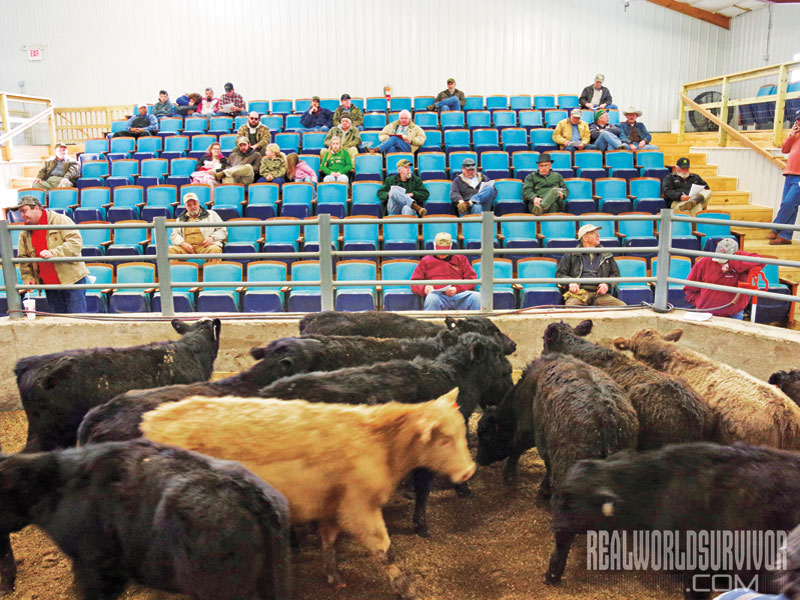 1 of 8
Photo by Jay Pinsky
A Success Story
On September 28, 2010, the Fauquier Livestock Exchange burned to the ground, but from this tragedy came a success story. 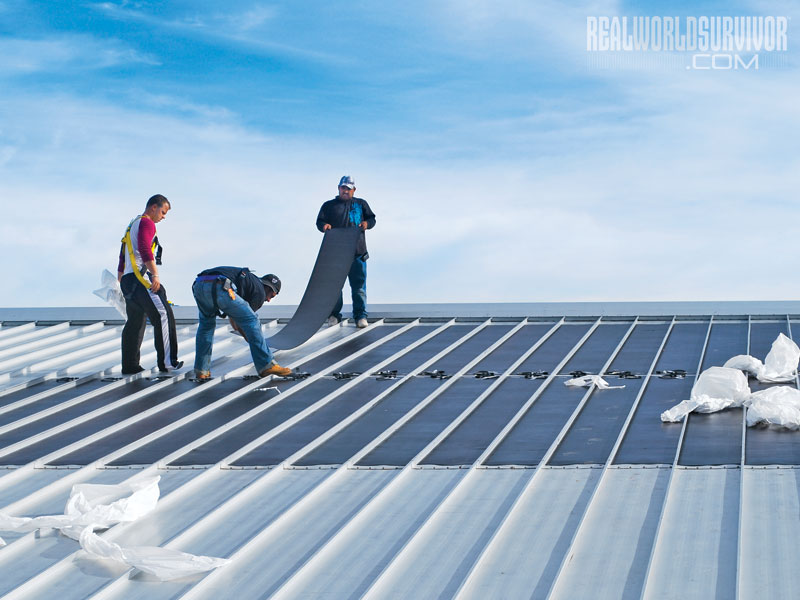 2 of 8
Photo by Fauquier Livestock Exchange
Harnessing Solar Energy
“By the end of the job more than 1,500 rolls of the laminate were used to cover more than an acre of rooftop. Each roll was designed to produce about 144 watts.” 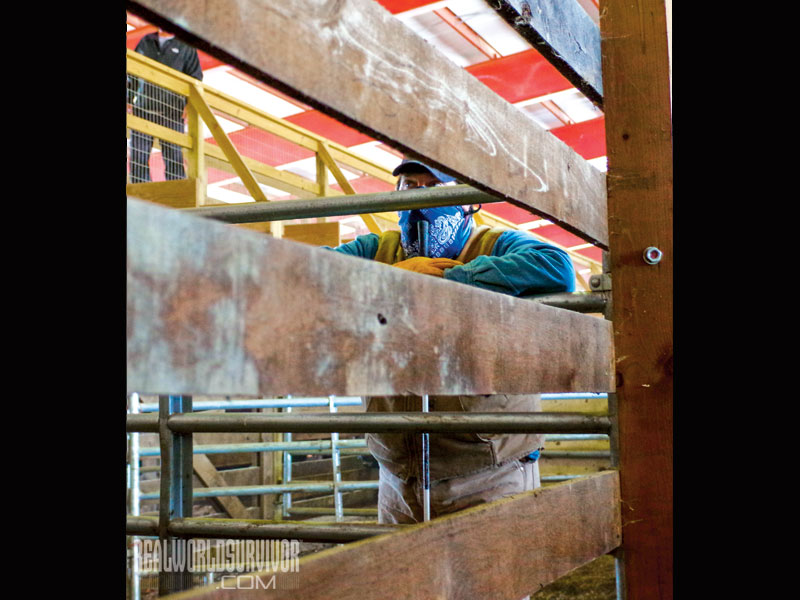 3 of 8
Cattle Handler
A LSE cattle handler waits for the next batch of animals to come into the pen. 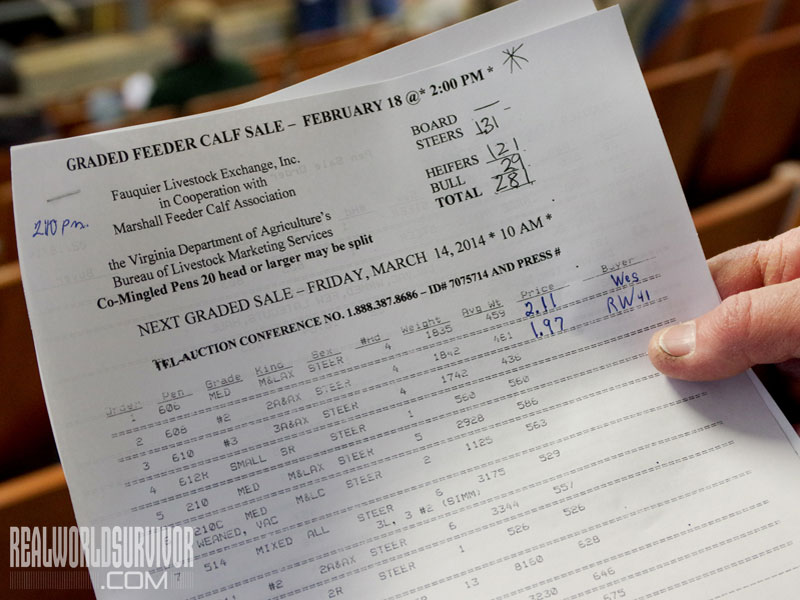 4 of 8
Photo by Jay Pinsky
An Important Industry
The Fauquier Livestock Exchange serves Fauquier County’s top industry. Most cattle sold are used to stock other farms. 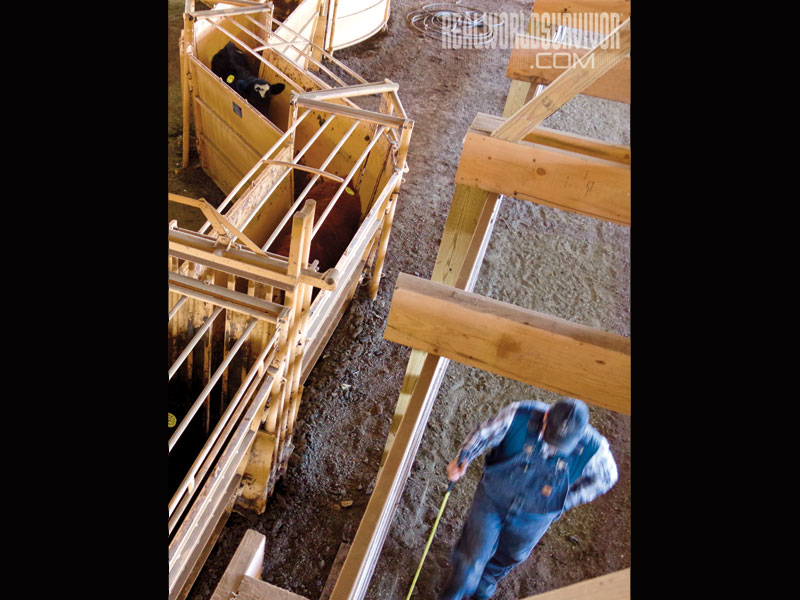 5 of 8
Photo by Jay Pinsky
Redesigning the LSE
When the LSE was rebuilt, the floor was engineered to make it easier to move livestock, which is easier on the LSE employees and less stressful for the livestock. 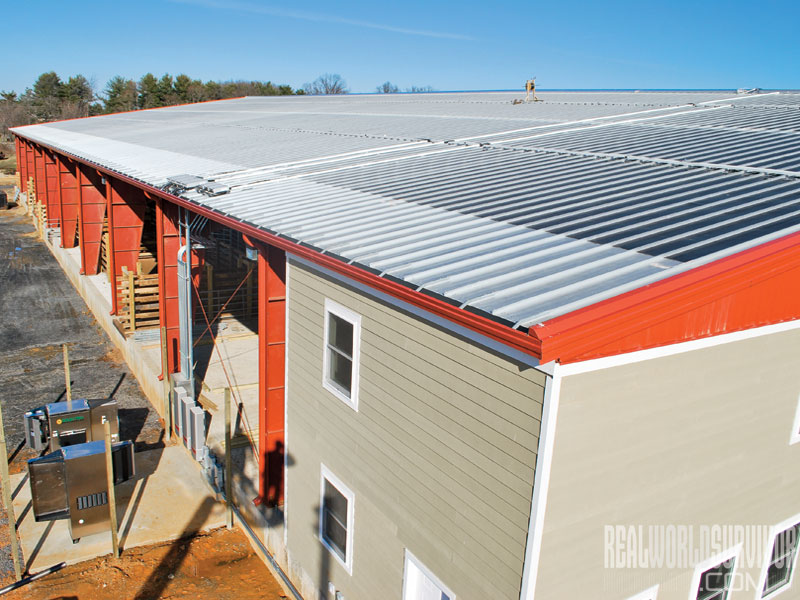 6 of 8
Photo by Fauquier Livestock Exchange
Cutting Energy Costs
Rebuilding the LSE gave its board of directors the opportunity to significantly cut its energy costs and sell power back to the local utility. 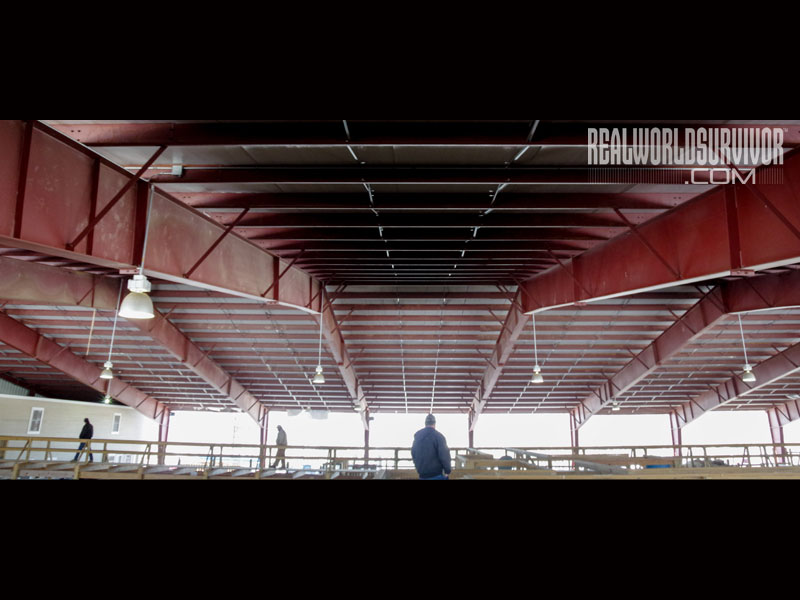 7 of 8
Photo by Jay Pinsky
Built to Last
“We built this facility for generations to come,” said Beavers. 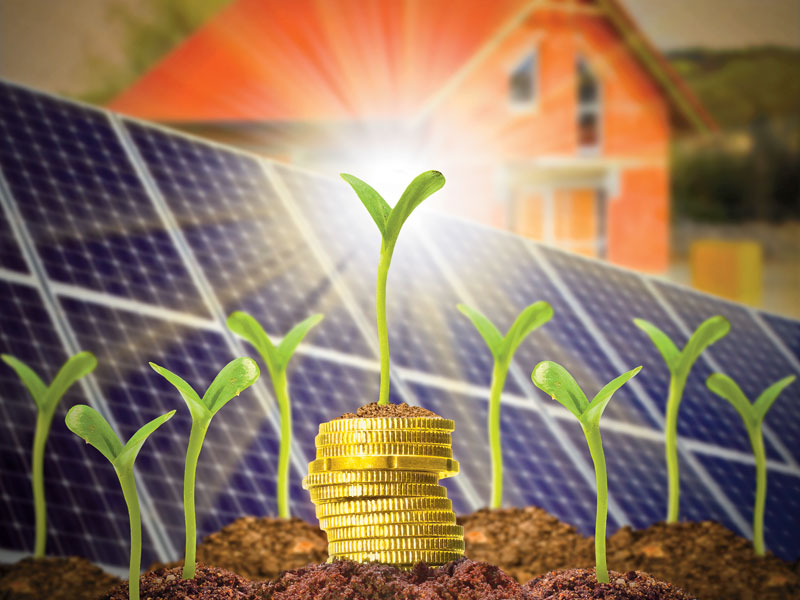 8 of 8
Photo by Big Stock
Crunching The Numbers
 Ninety percent of the steel used to rebuild the LSE is recycled.  Every inch of the roof is used for the solar energy system.  There are 1,520 rolls of UniSolar PVL-144 bonded to steel at the LSE.  The LSE system is rated at a total of 218,880 watts of energy annually.  The system is designed to produce more than 284,544 kilowatt hours of usable energy each year.  Based on the average American home using between 3,000-6,000 kilowatt hours of electricity a year, the solar energy system could power between 45-60 homes.  The first 32,000 watts are single phase, with the remaining 180,000 watts dedicated to three-phase power.  There are five inverters. Three are 10kw Fronius single-phase inverters and two are 95kw Solectria three-phase inverters. 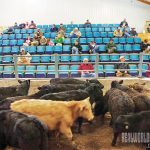 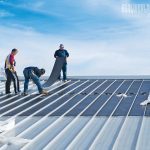 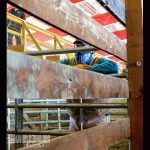 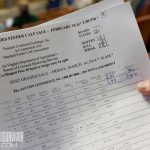 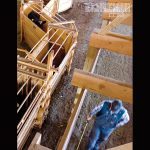 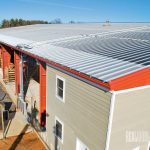 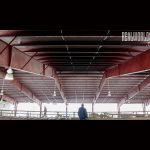 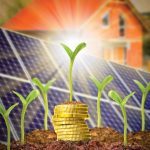 The Fauquier Livestock Exchange (LSE) has one of the the largest solar panel arrays in the state of Virginia. Unfortunately, it took a tragedy to make this happen.

On September 28, 2010, the last thing on the minds of the farmers of Fauquier County, Virginia, was solar energy. The county’s only livestock exchange had just burned to the ground. Cows died, millions of dollars were lost, and Virginia’s biggest beef producing county found itself without a place to showcase its cattle for the first time in more than 50 years.

“The Livestock Exchange was completely destroyed,” said Roger Beavers, the exchange’s spokesman. “The night of the fire more than 200 people came to help, including 10 fire companies, and some came from as far away as Winchester, Virginia.”

It seems that farmers, like the animals they raise, are not keen on feeling sorry for themselves. Despite the tragedy, the LSE didn’t stop selling cattle. According to Beavers, the LSE never ceased operations, even during the rebuilding process. It relocated operations to neighboring Culpeper County’s Culpeper Agricultural Enterprise. Armed with community support and a sizable insurance claim for $1.29 million, they did what most farmers do every year—they started over.

A chance to start over also meant a chance to makes things better, and the farmers did just that as they rebuilt the LSE. What they did went well beyond selling livestock—they figured out how to hire the sun and grow much more than cattle.

“We were faced with an opportunity to rebuild,” said Beavers. “It was our desire to build a structure that was innovative in design and would serve the agricultural community for generations to come just as our forefathers had done.”

According to LSE Cattle Manager Lindsay Eastham, some of the upgrades to the LSE included making the new LSE the most modern around by using the newest equipment, providing better ventilation for the cattle and being modular on the cattle floor, which would allow the LSE to change its configurations for different breeds of cattle and horses, sheep, goats and whatever else the business side of the LSE saw fit to run through.

Innovation sounded good, but it also sounded expensive to the farmers. Unfortunately, according to Beavers, the LSE didn’t have a lot of money, despite the insurance being paid in full because infrastructures like a livestock exchange are historically difficult to value properly. Just having the LSE rebuilt proved to be a financial challenge.

While funds might have been low, one thing the farmers had plenty of was rooftop. The plans for the LSE called for more than 42,000 square feet of shade over the cattle. Then it dawned on the farmers that the sun, which powered their crops and cattle, could power the LSE. “We started looking into an integrated solar system that would be large enough to take care of our energy needs,” said Beavers. “We began the conversation about becoming carbon neutral.”

Carbon neutral? What the LSE was talking about was lowering its carbon footprint to a net of zero by producing not just enough energy to power the LSE itself, but so much energy that it could make more energy than it used. In fact, the LSE could actually sell the excess energy it produced back to the electric company, a cooperative known as the Northern Virginia Electric Cooperative, or NOVEC, through Virginia’s new net metering energy law. “By capturing the sun’s almost endless supply of renewable green energy, we realized we would be helping not only ourselves but generations to come,” said LSE member Kevin Jennings.

Jennings explained that during the planning phase of the LSE’s reconstruction several members of the LSE’s board of directors petitioned for solar energy integration on the roof. The farmers had done their homework and even argued for the use of photovoltaic laminate roofing material to serve as the solar energy collector, rather than the more traditional simple solar panels.

“The new laminate was much lighter at 7 ounces per square foot versus 7 pounds per square foot,” said Jennings, who stressed that weight was very much an issue on a roof as large as the one the LSE hoped to use.

Solar energy, although innovative, still wasn’t cheap. Proponents of the solar energy business model were able to sway enough of the LSE board of directors to make it a reality by explaining the availability of federal government grant money to offset the investment needed to make the solar energy roof system a reality.

Jennings said the solar laminate came from a Michigan-based company and was installed by Infinite Green Energy, which was located in Marshall, Virginia. By the end of the job more than 1,500 rolls of the laminate were used to cover more than an acre of rooftop. Each roll was designed to produce about 144 watts.

Jennings said a system as large as the one designed for the LSE was capable of producing more than 284,000 kilowatts each year in direct current (DC) energy. Roughly translated, he explained that the LSE could make enough energy to power between 45-60 average-size homes for a year. In addition to the energy, the solar energy system would generate between 250-280 carbon credits per year, which are commodities these days. The LSE installed three-phase inverters so it could supply energy back to the local power grid and help power neighbors. He added that the LSE solar energy system is one of the largest privately owned solar collection facilities in Virginia and one of the largest on the East Coast.”

“We know there might not always be cattle around here, especially with the speed and reach of urban sprawl,” said Jennings, “so we have considered ideas like a future electric car or truck charging station.

“We built this facility for generations to come,” said Beavers. “We may not always have cattle here and we’re already thinking of ways to use the off-the-grid power we make.” 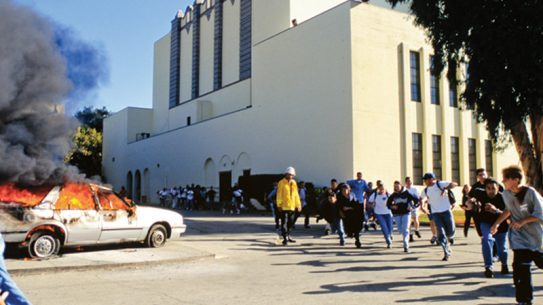 3 Tips for Surviving a School Shooting

Expert tips and tactics for students and teachers to survive a school shooting by...