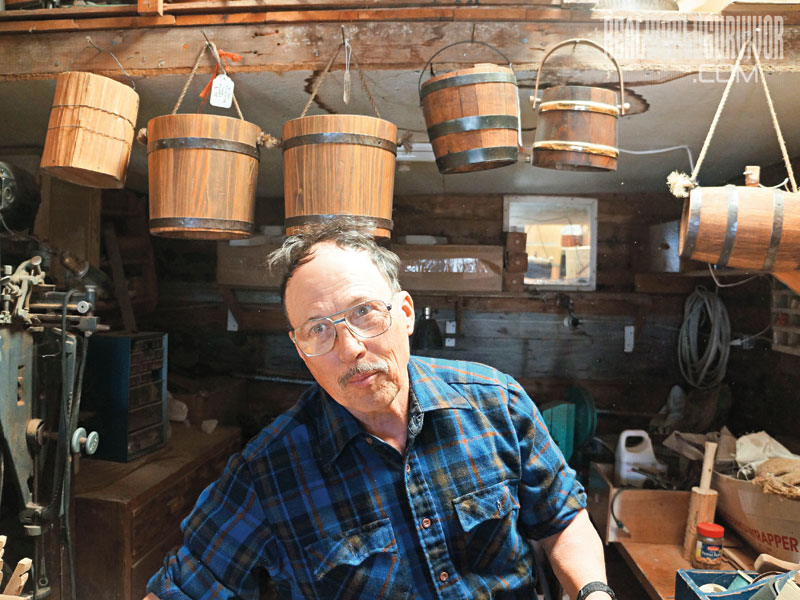 Photo by Gerard Attoun
Jim Gaster and some of his hand-crafted buckets. Every pioneer household and farm had several. They were used for eveything from milking to hauling water.
Comment(s)

1 of 9
Photo by Gerard Attoun
Hand-Crafted
Jim Gaster and some of his hand-crafted buckets. Every pioneer household and farm had several. They were used for eveything from milking to hauling water. 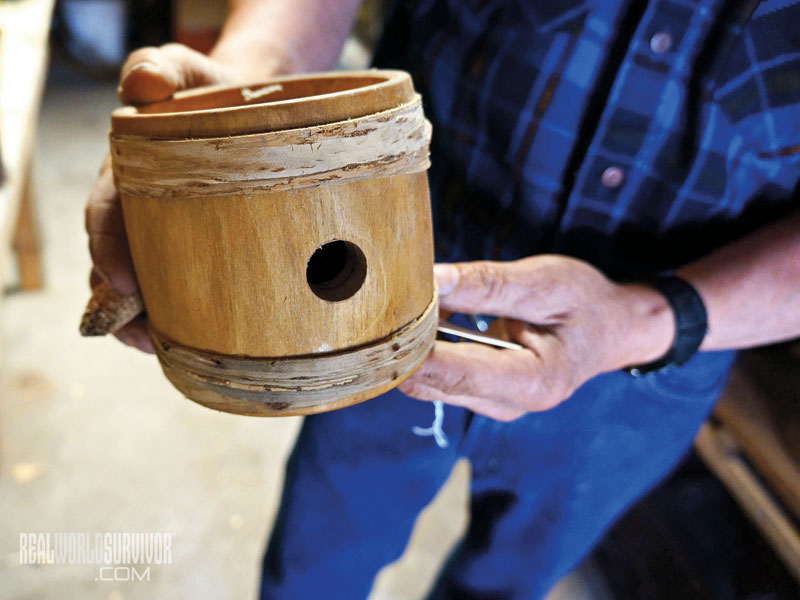 2 of 9
Photo by Gerard Attoun
Swiggler
During the American Revolution, troops carried a small amount of strong spirits in a swiggler to use on the battlefield for medical reasons. 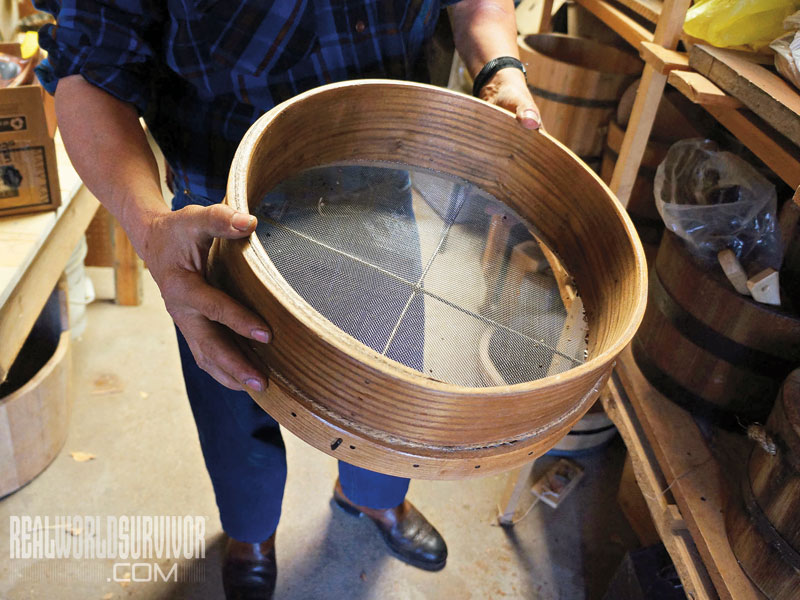 3 of 9
Photo by Gerard Attoun
Bentwood Sifter
Jim displays a round bentwood sifter. The Colonists sifted flour, herbs, spices and seeds in it.

4 of 9
Photo by Gerard Attoun
Finding A Niche
A carpenter by trade, Jim made hist first bucket in 1989 and found his niche.

5 of 9
Photo by Gerard Attoun
Vivandiére Keg
Jim holds a vivandière keg, which held three quarts and was used during the Civil War to bring liquor or water to troops. 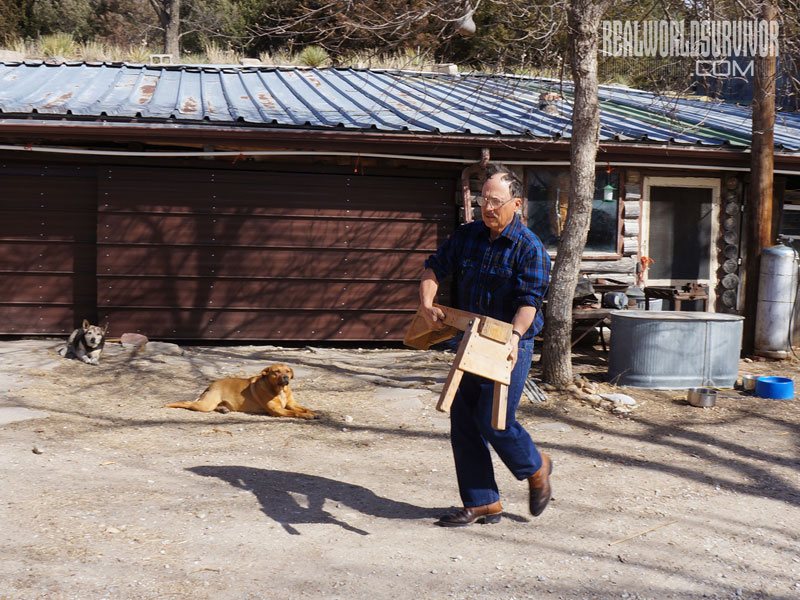 6 of 9
Photo by Gerard Attoun
Preparing The Work Station
Jim bring his shaver’s horse outside and sets up his work area. 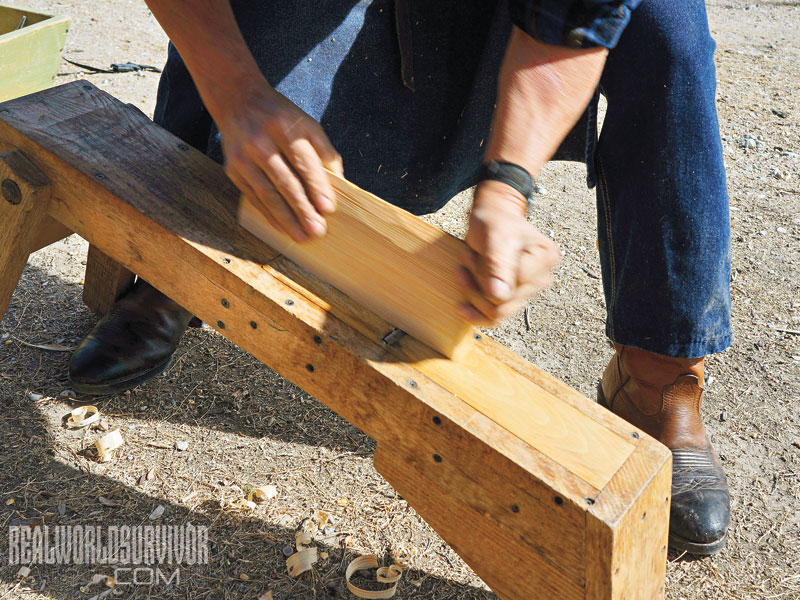 7 of 9
Photo by Gerard Attoun
Meticulous Work
Jim Gaster works on his shaver’s horse, shaping a stave for one of his buckets. This is meticulous, time-consuming work. 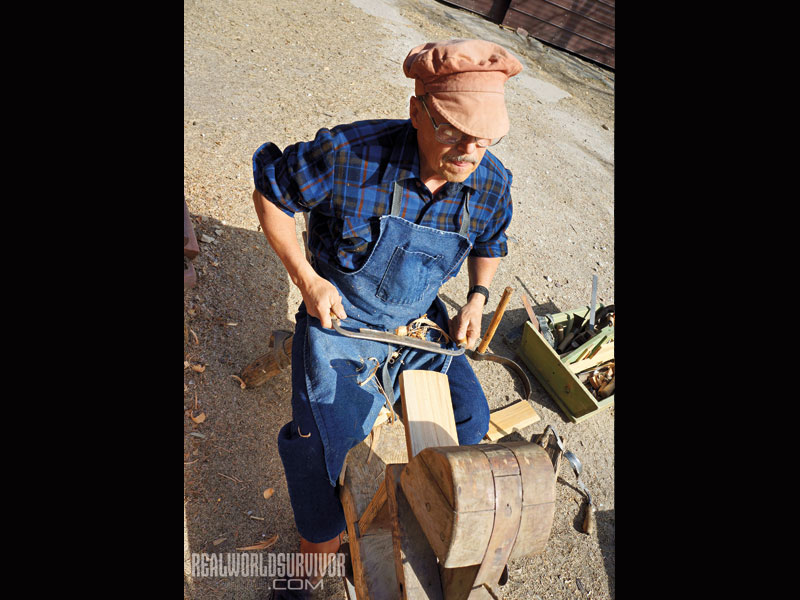 8 of 9
Photo by Gerard Attoun
Shaver’s Horse
Jim Gaster shaves bucket staves on the shaver’s horse that he also built. 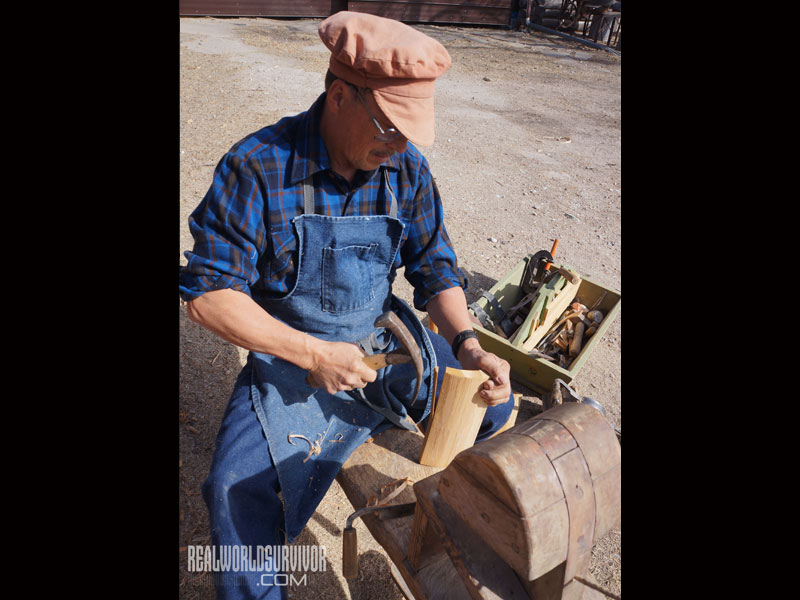 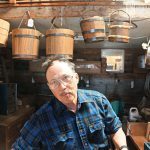 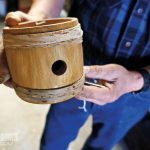 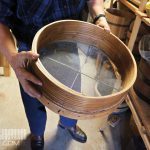 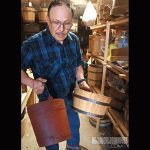 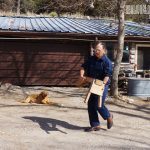 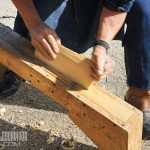 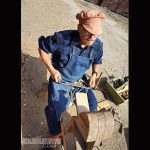 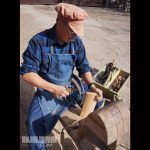 Sitting astride a primitive shaver’s horse, Jim Gaster shapes a chunk of white oak with a curved hollowing knife and then a straight drawknife into a stave for a wooden bucket.

“This is what America used when it was growing up,” said Jim, who carves out a living as a cooper and a new pioneer by making wooden buckets, flour barrels, butter churns, washboards, dippers, yokes and other household and farming items that were used by the nation’s original pioneers.

Jim and his wife, Marilyn, live in a log house that they built over several years on a secluded bluff near Indianola, Nebraska. Patience, pay-as-you-go and finding value in what others reject are qualities that have long defined their lifestyle.

“It was 40 acres of horse-eaten, dried pasture” is how Jim described the barren, rejected property that they paid cash for in 1977. “It was land that nobody else wanted.”

That first year, the Gasters planted 100 pine trees—and only three of the 6-inch saplings survived. Discouraged but determined, they planted 3,000 pines, cedars and junipers. The cedars in particular adapted to the dry land and today, 36 years later, you can’t see their house through the forest.

Nothing is hurry-up, either, about the pioneer products that Jim crafts. For the buckets, he spends half a day making a dozen staves for each one, cutting grooves in the bucket head to hold the staves, then working iron bands or willow saplings around the staves. They must line up perfectly snug or the bucket will leak.

“It’s very relaxing. It’s a gentle craft without noise,” Jim said as he worked outside on a warm day. The sounds of nature provided the background chirps as he thinned yet another piece of oak into a stave.

He calls his business Beaver Buckets in honor of his sharp-toothed silent partners. Along several nearby river bottoms, beavers have gnawed trees, and the shoots that come up afterward are ideal for making bands for buckets.

After banding, Jim seals each bucket with hot wax and adds a rope or metal bail. He then crushes walnut hulls to concoct a dark brown stain.

“Each bucket has its own characteristics because each piece of wood is different,” he said.

Related Stories: A Market Fair Fit For a Colonist

A carpenter by trade, Jim made his first bucket in 1989 after deciding to find a niche where he could put his woodcraft skills to use without crawling around on roofs in 100-degree weather. He knew there was a market for authentic wooden buckets among historic re-enactors who portray life during the 1700s and 1800s.

Jim has long been a buckskinner and participated in fur-trade-era encampments himself. Seeing a trapper or trader toting a plastic or galvanized bucket just didn’t mesh with the scene.

Determined to teach himself the art of coopering, Jim did research in libraries, museums and antique shops. He visited with coopers at living history demonstrations and museums. Sometimes he was able to find rare coopering tools for sale at antique stores, but they were too expensive to buy so he made his own after studying those used by the original craftsmen.

“He likes a challenge,” Marilyn said.

Jim spent about 10 years perfecting his craft before he began peddling his historically accurate and functional gallon buckets and barrels at craft fairs and re-enactments. Although he sold some items, most people couldn’t afford a handmade 19th-century chore bucket or a colonial-era piggin. A piggin has one long stave that can be used as a handle.

“Finally, someone gave me some good advice and said, ‘You’re trying to go to the customer. Let the customer come to you,’” Jim said.

The Gasters’ son, Jeremy, created a website for Beaver Buckets and word spread nationally and internationally about his products that were made with such careful attention to historical detail. His first big break came from the Smithsonian Institution in Washington, D.C., which needed a particular wooden washtub for an exhibit.

More custom orders followed after the Smithsonian’s, some from museums and even Hollywood. Jim has made props for several movies, including Seabiscuit, The Legend of Zorro and The Assassination of Jesse James By The Coward Robert Ford.

Jim’s “biggest bucket” is a 1,100-gallon wooden water tower for the Littleton (Colorado) Historical Museum, and his “oldest” are five water and gunpowder casks modeled after ones excavated from the 1686 La Belle shipwreck off the Texas coast. Customers often bring him rotted objects or send photos and specifications of the items they want duplicated.

Jim crafts wooden canteens like ones used in the War of 1812 and vivandière kegs that were used during Napoleon’s day. Women toted wine in kegs to troops on the battlefield.

Doing research is much of the fun for Jim, who loves history. His ancestors homesteaded near Beemer, Nebraska, and as a child he enjoyed visiting the old family farm. Being able to reproduce some of the wood wares that his great-grandparents used makes him proud.

So does sharing his hard-earned skills. Jim has been a guest cooper at Lincoln’s New Salem State Historic Site in Illinois and at George Washington’s Mt. Vernon in Virginia. He’s written a book, How to Make a Coopered Wooden Bucket, and produced a DVD so that other folks will have the detailed information that he once sought. For more about Beaver Buckets, visit beaverbuckets.com or call 308-364-2528. 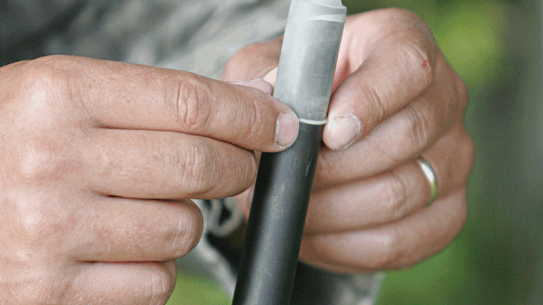 Keep dirt and water out of your black powder firearms with a Gun Jimmy... 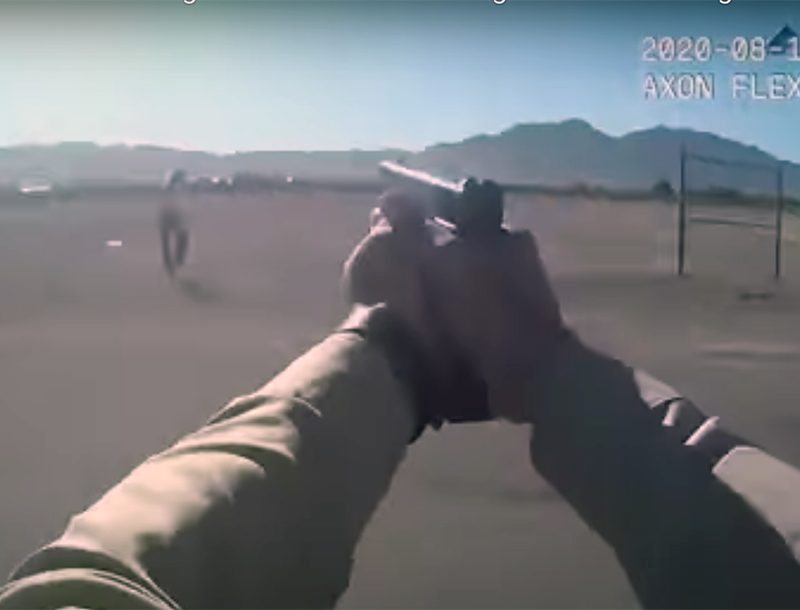 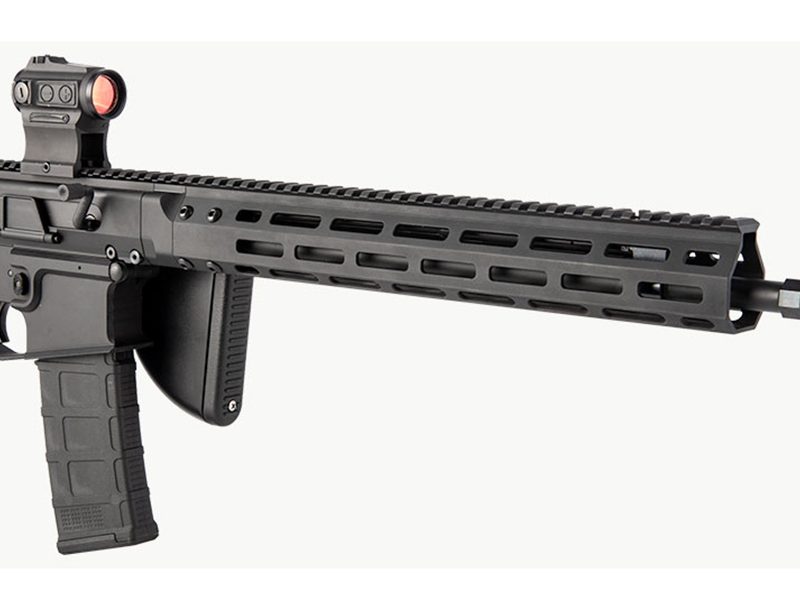 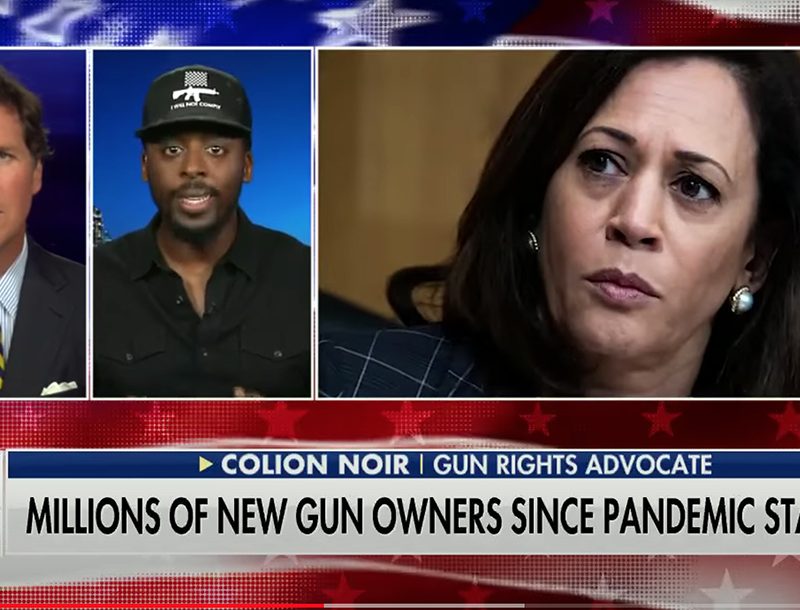