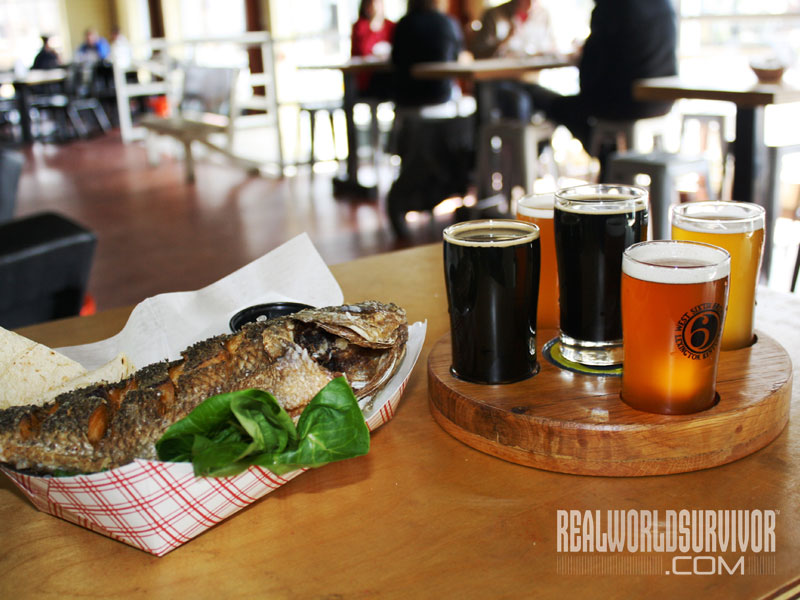 Photo by Jereme Zimmerman
The author enjoyed Smithtown Seafood’s Tilapia Singapore dish and a flight of beer from West Sixth while researching this article.
Comment(s)

1 of 8
Photo by Jereme Zimmerman
Fresh Tilapia and Brew
The author enjoyed Smithtown Seafood’s Tilapia Singapore dish and a flight of beer from West Sixth while researching this article. 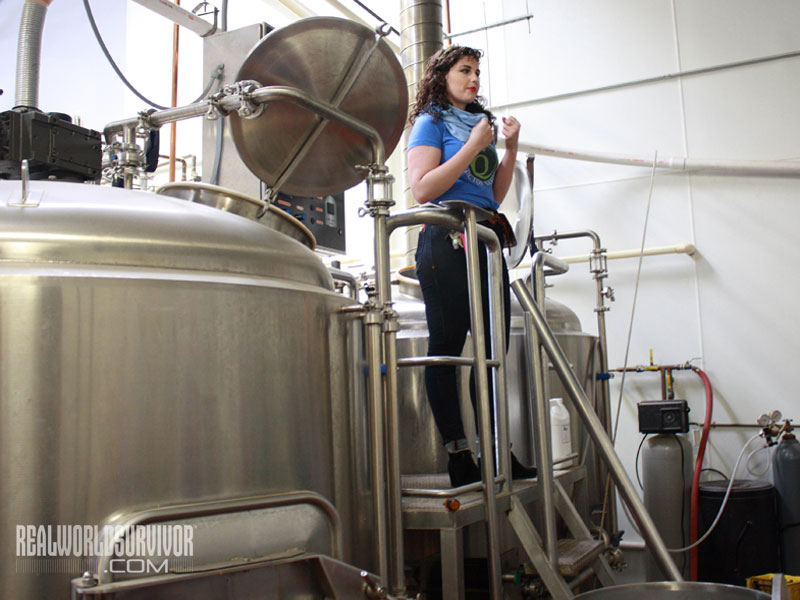 2 of 8
Photo by Jereme Zimmerman
Fermenter in Action
One of West Sixth’s brewery tour guides, Sarah Landolt, demonstrates a primary fermenter in action. 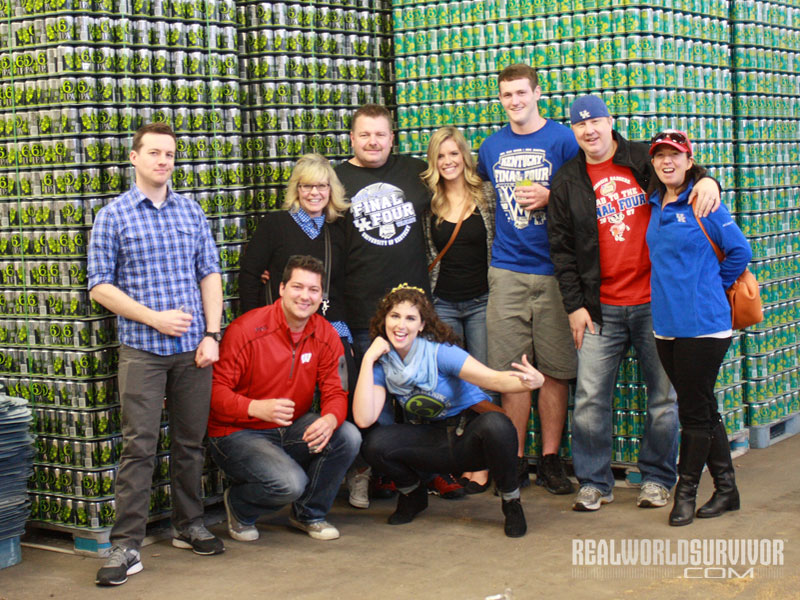 3 of 8
Photo by Jereme Zimmerman
Brewery Tours
Sarah Landolt poses along with a group of fans during a tour in front of cans of IPA and Lemongrass American Wheat. 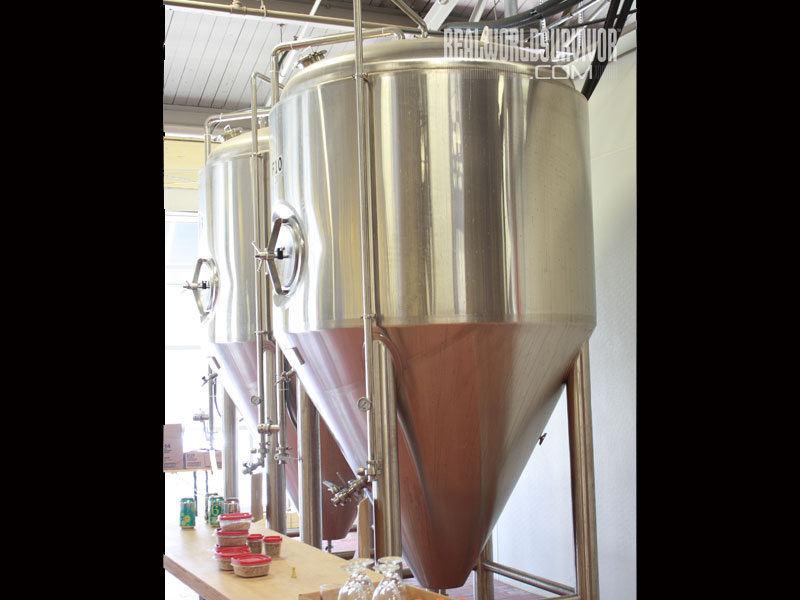 4 of 8
Photo by Jereme Zimmerman
Secondary Fermentation Tank
West Sixth’s secondary fermentation tank is a cylindroconical fermenter that is shaped like an inverted cone to make yeast extraction easier. 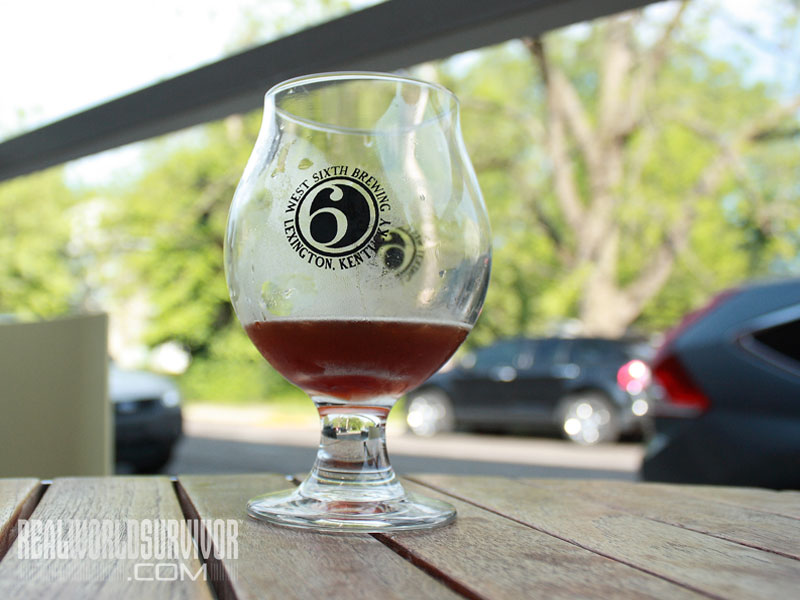 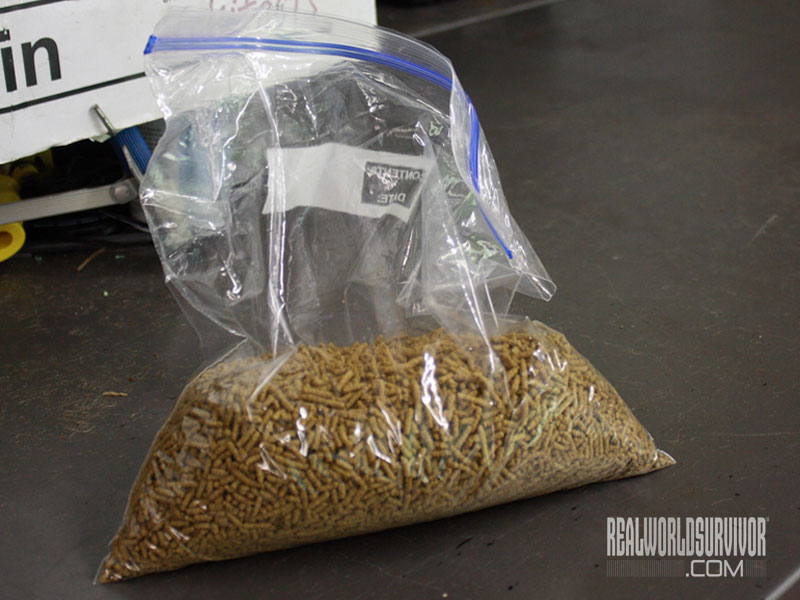 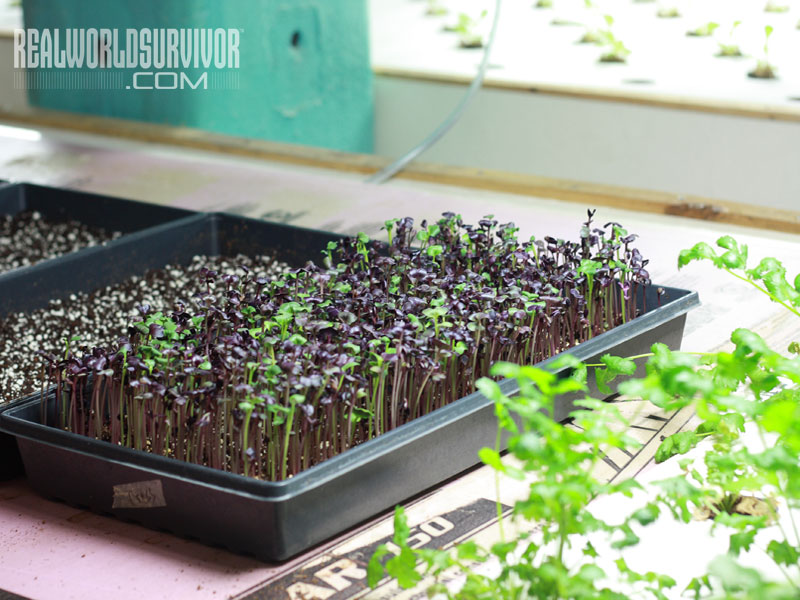 7 of 8
Photo by Jereme Zimmerman
Microgreens
In addition to lettuce for salad and various herbs, FoodChain has recently begun experimenting with microgreens, which are highly concentrated in flavor and nutrition. 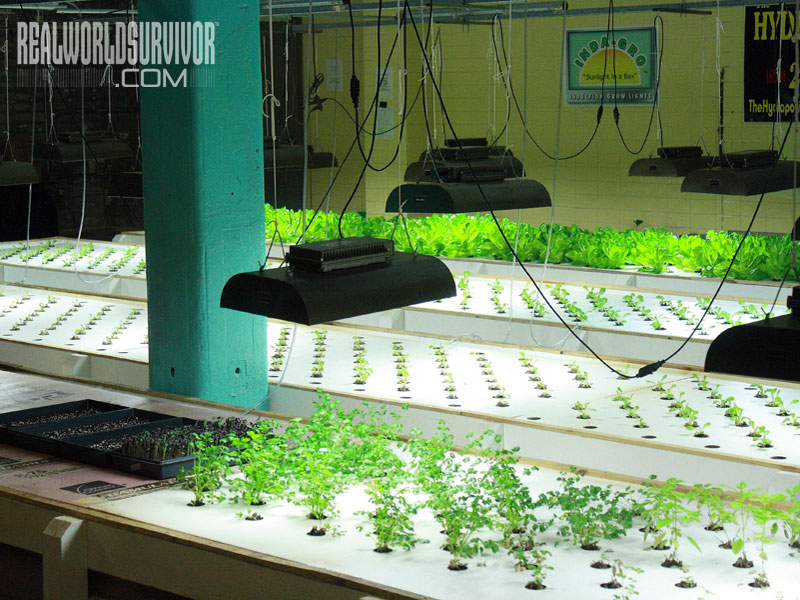 8 of 8
Photo by Jereme Zimmerman
Aquaponics
FoodChain has installed induction lights that use electromagnetism as opposed to electrodes. This provides full-spectrum light akin to the sun with half the amount of electricity that traditional lighting requires. 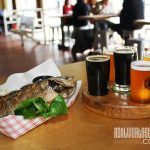 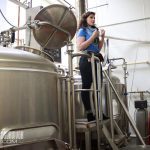 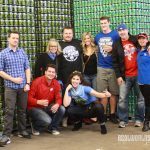 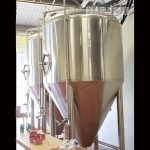 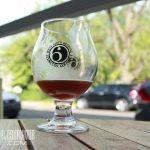 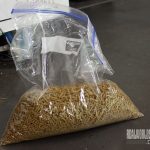 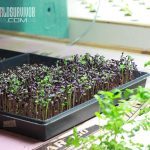 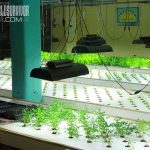 Over the past few years, Lexington, Kentucky has become a hotbed of entrepreneurship, “locavore” restaurants and craft breweries, all focused on sustainability. These trends converged in The Bread Box, a former Rainbo Bread factory, when a group of entrepreneurs rented the space to form West Sixth Brewing, FoodChain and Smithtown Seafood.

The owners already knew each other well. Rebecca Self runs the non-profit FoodChain, which grows food indoors using aquaponics, while her husband Ben is a co-owner of West Sixth. Smithtown Seafood, a farm-to-table restaurant, is run by Ouita Michel, a chef and co-owner of four other Lexington restaurants.

The three organizations have a symbiotic relationship. FoodChain raises tilapia fish, using some spent grains from West Sixth for fish food, harnesses the fish waste to fertilize garden greens, and then provides Smithtown with freshly harvested fish and greens grown in rooftop containers for its menu.

Eventually, the group plans to keep all of the brewery’s waste products on-site by using spent grains to cultivate mushrooms in The Bread Box’s damp basement, which will then be used in Smithtown dishes. They have also recently begun container gardening on the building’s roof, and plan on using vermicompost from the spent mushroom medium to fertilize hoophouse grow beds.

The relationship makes sense from a logistical standpoint. West Sixth has plenty of seating and lots of beer on tap, but only bar snacks for food (in addition to food trucks on weekends). Smithtown, in turn, has no seating and no beer. Patrons of West Sixth hungry for food can visit a restaurant in the same building to place an order, and patrons of Smithtown can use West Sixth’s seating and, if they wish, have a beer with their meal. Behind the scenes are the brewing operations and FoodChain’s aquaponics setup (tours are available).

Can This Really Last?

Rebecca Self, who has a background in education, said, “As an educator, I tend to think of sustainability as that three-legged stool analogy—equal parts community, environment and finance.” Rebecca emphasizes that Americans need to be educated on the real cost of food. “Americans have become accustomed to artificially cheap food (we now know those costs are accrued elsewhere), so we’re working to help folks understand why local food grown sustainably should cost more than heavily processed, calorie-laden, subsidy-supported foodstuffs.”

Smithtown, in turn, spends much more on food production than the average restaurant. Rebecca noted that the staff “clearly labels these costs for the consumer on items that include FoodChain ingredients.” She added, “I think this is important for our transparency and for the needed paradigm shift in consumers if local food is ever to be financially viable. A tilapia dish, for instance, costs $20, which, in addition to being made from ingredients that were nearly all produced on-site, includes an $8 donation to FoodChain, to further its ‘mission of innovative, sustainable agricultural practices.’”

But why run an aquaponics setup in the same building as a brewery? West Sixth, although a small brewery, is expanding rapidly and produces enormous amounts of waste grain daily. From the beginning, its co-founders committed themselves to being good to their community and respecting the environment. Upon having some spent grains analyzed, they found that it had a high degree of nutritional value. So, they partnered with Kentucky State University to produce fish food made from the grains.

The goal is eventually to find a use for all of the grain, which benefits each organization involved and the environment. In the meantime, West Sixth offers the grain to local farmers. According to its website, cows seem to enjoy it, as do chickens; turkeys are less thrilled, and one farmer commented that his pigs just roll around in it instead of eating it.

Ben Self, who oversees marketing for West Sixth, said that while the brewery strives to source its ingredients locally, that isn’t always possible.

West Sixth’s stated goal of running a “brewery whose sole goal wasn’t just making money but also giving back to the community” is evidenced by the choice to can rather than bottle its beers. As Ben noted, “Choosing canning instead of bottling was a natural choice. Not only is it better for the beer because it keeps it fresher longer, but it also is better for the planet.”

Ben emphasized that the smaller carbon footprint from shipping cans instead of bottles, and the fact that aluminum is much more widely recycled than glass made this an obvious choice. The six-packs are held together by PakTech rings manufactured in Eugene, Oregon. The rings are made of 96-percent post-consumer recycled (PCR) materials and West Sixth reuses or recycles them whenever possible.

But how does this affect the flavor? According to West Sixth’s website, “Unlike canned beer of the past, today’s cans are lined with a water-based coating, so that the beer and metal never touch each other, and there is never an off flavor generated.” Currently, West Sixth cans its flagship four-hop IPA, Amber Ale and, most recently, its Lemongrass American Wheat, which is brewed with lemongrass and Sorachi Ace hops that originate from Japan.

West Sixth has also released a limited-edition can for the second beer it brewed in partnership with Country Boy Brewing. Country Western Volume 2 is a brown ale with the flavor of Kentucky. Brewed with Kentucky sorghum, it was then aged in Kentucky bourbon barrels to “kick it up a notch!”

If you’re able to procure some West Sixth brew, I highly recommend it. As the can says: “Why a can? Better for the beer. Better for the planet. Better on the go.”

All in all, this trio of fish farmers, farm-to-table restaurateurs and fine beer brewers is one to emulate. 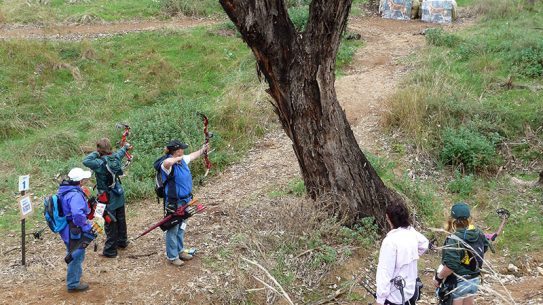 Shoot Like a Pro with the ‘Beginners Guide to Archery: For Women’ DVD