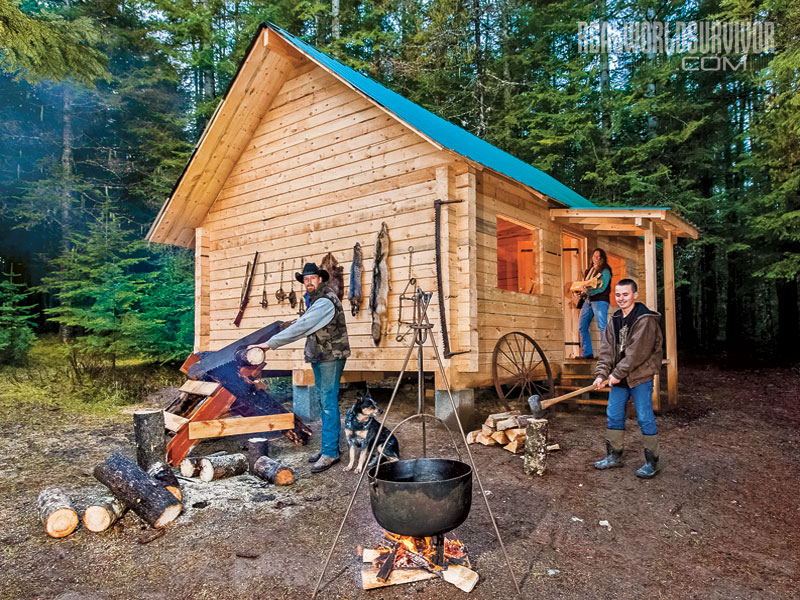 1 of 9
Photo by Thomas Kirchen
The CrossCut Saw
Glen Trayer is using a one-man crosscut saw and there is a two-man felling saw on the cabin wall. 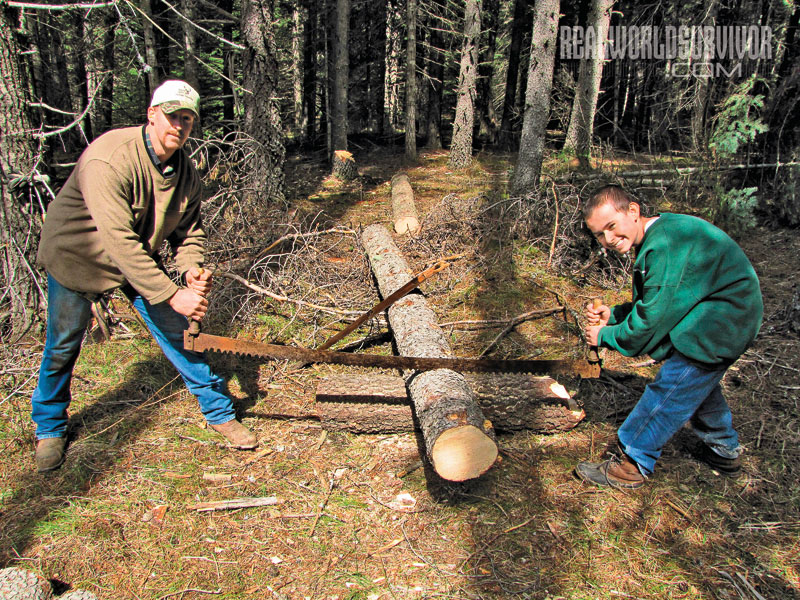 2 of 9
Photo by Tammy Trayer
Two-Man Crosscut Saw
Using a felling saw to buck a downed tree. With this thin, narrow blade it’s critical that the sawyers only pull and never push the saw or it will bend on them. 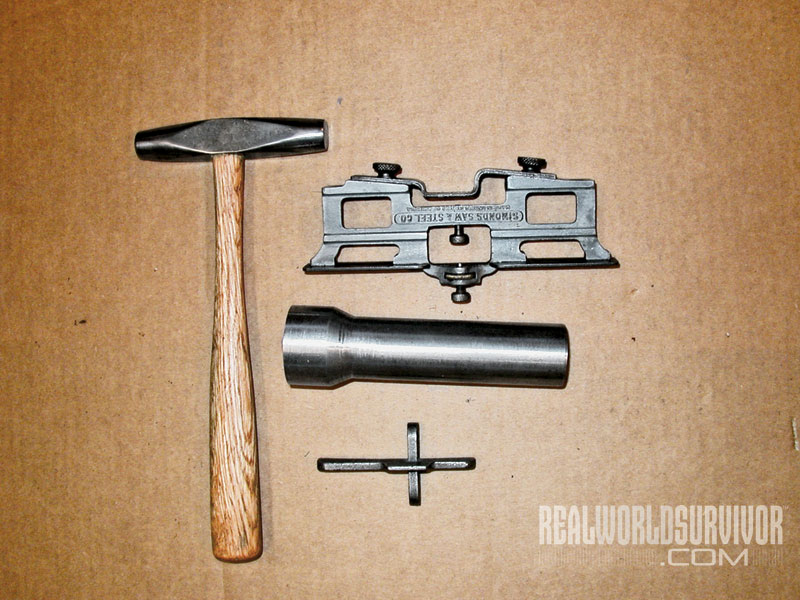 3 of 9
Photo by Jim Talburt
Basic Sharpening Tools
The basic sharpening tools needed for a crosscut saw: hammer, raker gauge, hand anvil and spider. A workman is known by his tools and a good workman will have a full complement of all available tools, not just the basics. 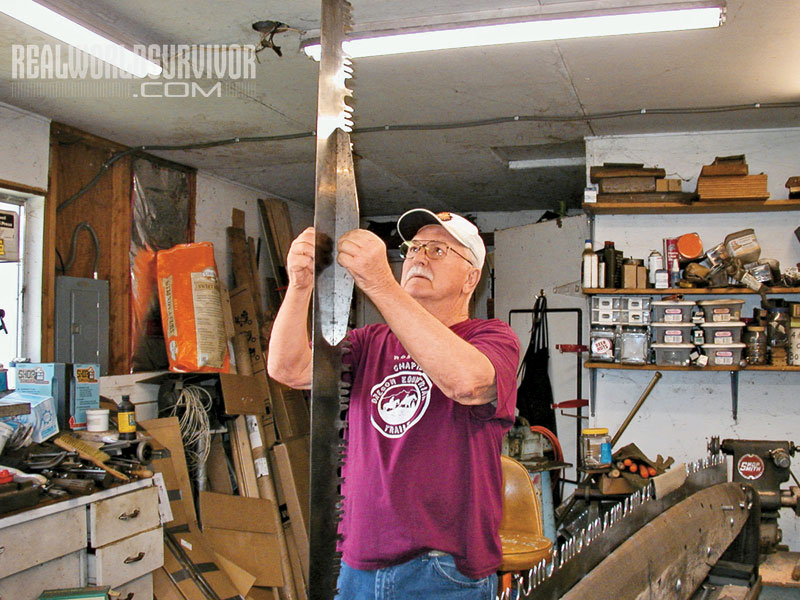 4 of 9
Photo by Jim Talburt
Checking For Kinks
Master saw doctor Jim Talburt checks a saw for bent spots with two steel straight edges. Pushing on a saw and buckling it are a common source of these bends. 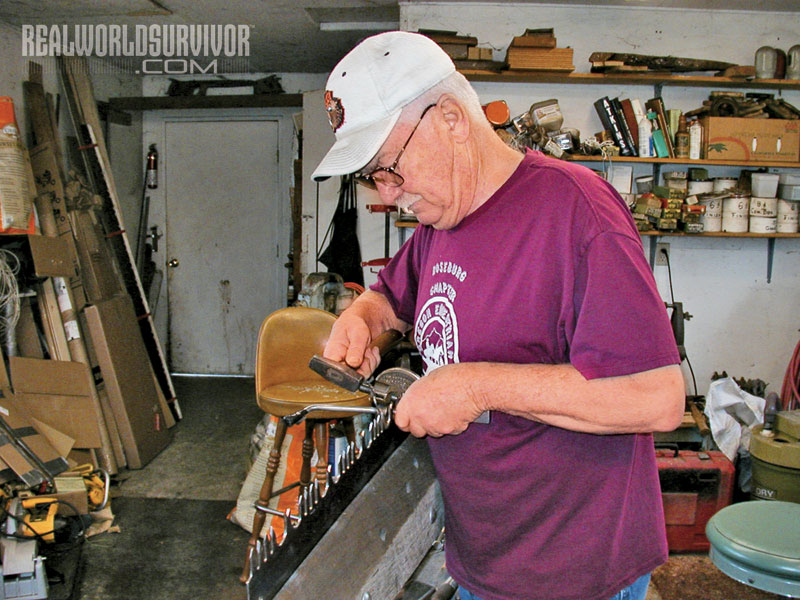 5 of 9
Photo by Jim Talburt
Setting With Anderson No. 5 Saw Set
Setting the saw’s teeth with a hammer and hand anvil. This is tedious work as each tooth must be set to precise measurements. 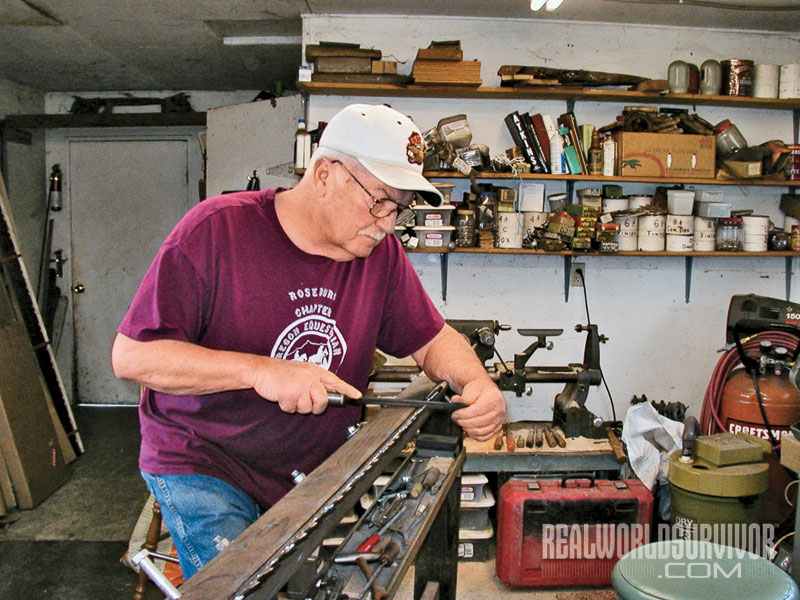 6 of 9
Photo by Jim Talburt
Filing Cutter Teeth
Filing the teeth sharp. One must be careful not to change the height or shape of the teeth. 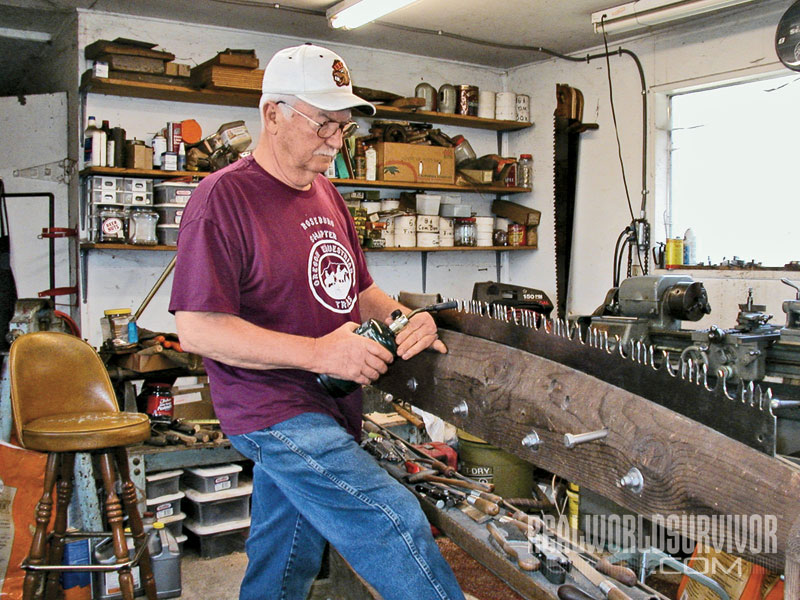 7 of 9
Photo by Jim Talburt
Annealing Raker Teeth
Drawing the temper on a work-hardened saw that has become too hard to set and file. Teeth will break off when you set them if they are too hard to be filed. 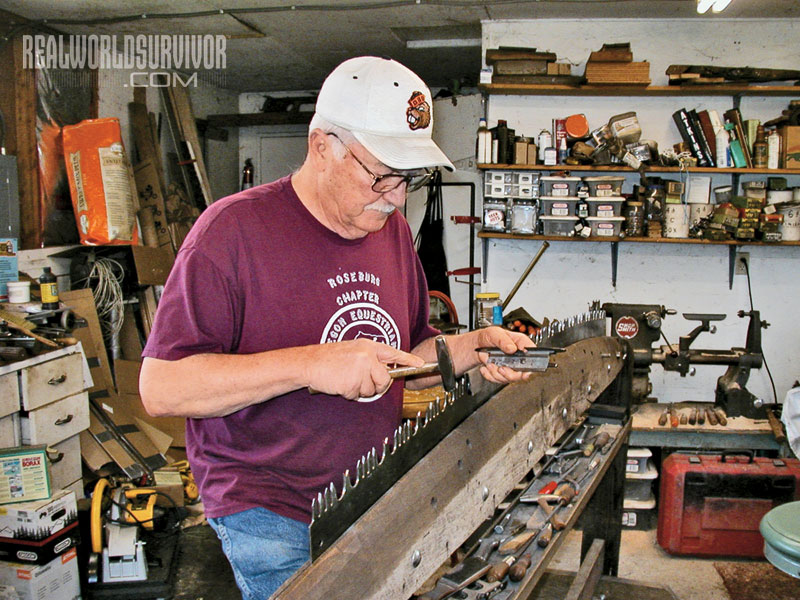 8 of 9
Photo by Jim Talburt
Swaging Raker
Swaging raker teeth. These must be exactly the right shape and height if they are to carry off the saw’s shavings properly to keep you cutting. 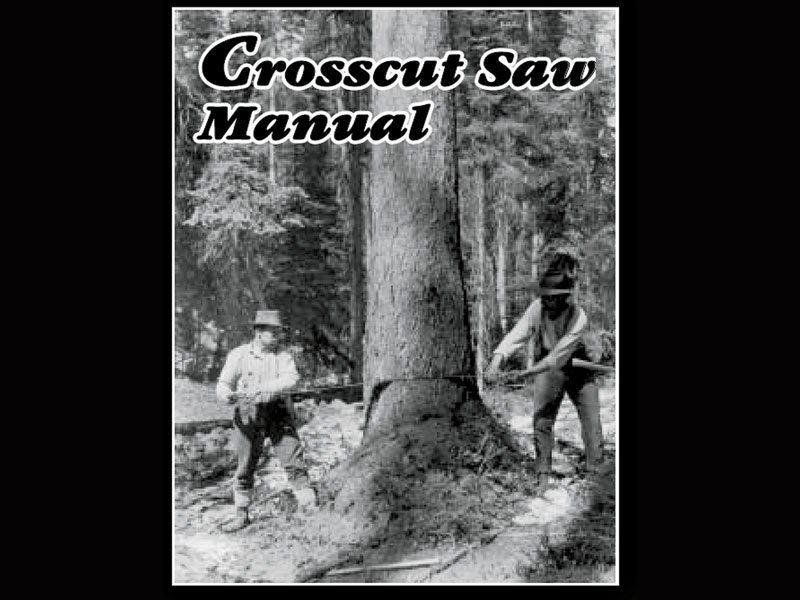 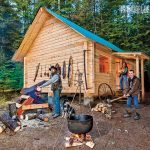 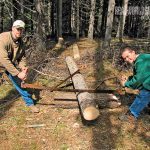 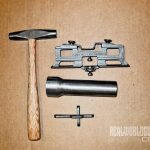 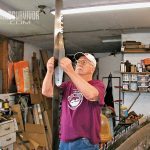 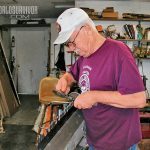 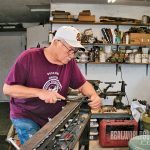 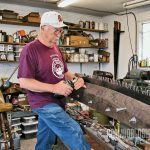 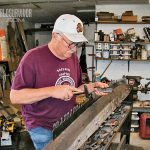 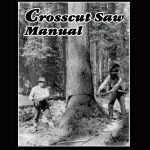 In the days before chainsaws, if you had any sawing to be done you did it with a crosscut saw. Today, if you are in a federal wilderness area, you still do because that’s the only saw legally allowed. One-man and two-man crosscut saws are a lot easier to pack than a chainsaw, and are the only saws that will work for long-term survival when you can’t get parts and gasoline for a chainsaw.

Sharpening a crosscut saw is a lot different than sharpening a chainsaw and requires skill and the proper tools. A man who sharpens crosscut saws professionally is called a saw doctor, and a good saw doctor is worth every penny he charges. Since it is not uncommon to spend up to three full days on a difficult saw, don’t expect his services to be cheap.

Saw doctors are rare today and a crosscut saw user may well have to learn how to do it himself. I strongly advise that you get the best saws and tools money can buy because cheap saws and cheap tools make a saw into a “misery whip,” which is the term for a saw that won’t cut worth a darn. The old saying “They don’t make them like they used to” applies especially to crosscut saws. The factories don’t have the tooling to make the old top-of-the-line, crescent-ground saws anymore, and the customers won’t pay as much for a saw as the old Pacific Northwest lumber companies would when time spent cutting was money out of the company’s pocket and any advantage was worth paying for.

Cheap saws are flat ground, being just as thick at the cutting side as the back of the blade. Better saws are taper ground, with the saw progressively thinner towards the back so they bind in the cut less. The best saws are crescent ground so that the taper is even all the way to the back despite the belly of the saw being wider than the ends. These cut a lot better, but no one has machinery that can make them today. The old saws are also normally tempered harder than the new saws, so they hold an edge better.

To start the sharpening process the saw must be cleaned of all dirt and rust. Any kinks in it can be found by holding a straight edge on either side of the saw so that you can hammer the kinks out with a cross-peen hammer.

Ideally you would make a saw vise  of two boards that’s rounded at the top to match the contour of the saw below the teeth and bolted together at the bottom below the back of the saw. This is then mounted on feet made by notching a bottom board for the top two boards, and this goes on the workbench. Alternatively, you can put a pair of short boards on each side of the saw and mount the rig in your bench vise. Although this is inferior to a proper saw vise it does work.

Next, the arc of the saw must be established by jointing the saw with the jointer. This is a device that holds the file. You hold the jointer in your hand and push it lengthwise down the arc of the file teeth. It has a set screw to bend the file so that it matches the arc of the saw edge. Don’t ever push a file backwards as this ruins a file fast. There are both short jointers and long jointers, with the long ones being the best.

Jointing is necessary because the saw teeth are usually not all engaged in every stroke due to short stroking by the sawyer. This results in uneven wear and repeated sharpening results in an uneven arc. I have seen it so bad that I once had to resort to jointing a much-abused saw on a belt sander, but this was a radically extreme case. Use the jointer to make an arc over the full length of the saw until just a tiny bit of metal has been removed from the tops of the teeth. If one or more teeth are way lower than the rest, then just leave them. You don’t want to file the saw away, wearing it out prematurely.

Next come the raker teeth, those M-shaped projections that have no offset and sit between the rows of cutting teeth. Their job is to rake out a strip of wood after the cutting teeth have scored each side of the cut. The raker teeth should be between .008 and .030 inches below the height of the main teeth. Hardwoods need less depth while softwoods need more. A good average is .012 inches. The raker gauge is used for this operation. It fits over the rakers being worked on, and it has an adjustable filing plate with marks representing .004-inch differences in tooth height. 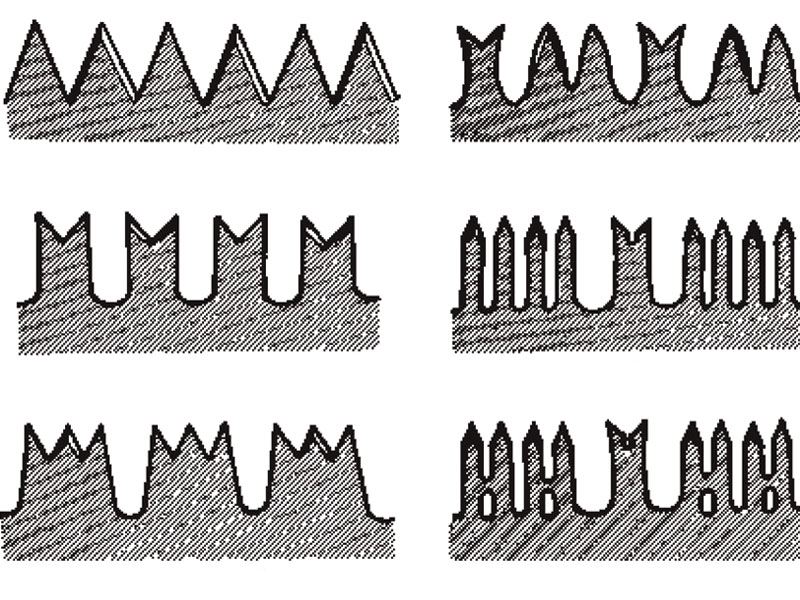 Use a file to bring the tops of the rakers even with the tops of the filing plate. You now can repoint them as square sided with a convex filing to bring the insides to a point, or you can swage them so that they will lift a shaving up better. Swaging is done by striking the inside edge of the raker with an 8- to 16-ounce hammer, bending the edge out and lowering it .002 to .003 inches, as measured by a raker pin gauge.

Some saws are too hard and brittle to swage without breaking. If you can barely file the saw, you need to carefully draw the temper in the teeth with a blowtorch to between a light blue and the second straw yellow color. Don’t let the ends overheat and don’t heat the body of the saw. No quench is needed since you are just drawing some of the hardness off. While some saw doctors don’t like this method, I like to swage my rakers by placing a large, round steel bar in the center of the “M” and striking, thereby forming a perfectly swaged shape. Being a blacksmith may be the reason I have been so successful with this method where others have broken raker teeth. There is a certain blacksmith’s touch that comes with about half a century’s experience at the forge and anvil.

The teeth are filed only on one side, and the teeth are opposing in a saw blade. They should be slightly convex in shape, both towards the edge and the point. Take off any burr with a fine-grit whet rock held flat against the back of the tooth. You don’t want to start a bevel on the flat side.

The teeth have to have their set renewed regularly so that the opposing teeth are bent slightly to the opposite side of each other. Saw teeth are set from next to nothing to .010 to .030 inches. I prefer the latter on all my saws, but this is a matter of individual preference. A handheld steel bar serves as an anvil and the tooth is struck at a point about 0.25 inches below the tip, bending it slightly toward its unsharpened side. The tooth is projecting 0.25 inches above the handheld anvil during this strike. A four-legged set gauge called a spider is used to measure this. I prefer the new dial micrometer set gauges, though.

For a more detailed study than this article, I highly recommend the Crosscut Saw Manual by Warren Miller. It is a free government publication that can be ordered by calling 406-329-3900 or faxing 406-329-3719. It can be viewed online in PDF form at the U.S. Forest Service’s website.

Saw sharpening is precise, tedious work and it is not uncommon to spend up to three days on one saw. If you rush the job the result will be a saw that cuts poorly. Be careful and use a delicate touch—a properly sharpened crosscut saw is a precision instrument. When sharpened right, it will outperform a chainsaw, as it has repeatedly proven in crosscut competition sawing events.

If this project looks a bit intimidating I can recommend a good saw doctor—Jim’s Crosscut Saws (541-673-6940; jimscrosscutsaws.com).

You can ship the owner, Jim Talburt, your saws for sharpening. He is also a good source for used saws and saw-sharpening tools. When starting with a dull or perhaps somewhat abused saw, you will also find it easier to touch up his work as it dulls rather than to put a well worn or abused saw right yourself, if you are planning on doing your own sharpening.

Related Stories: 11 Tools for Every Adventurer 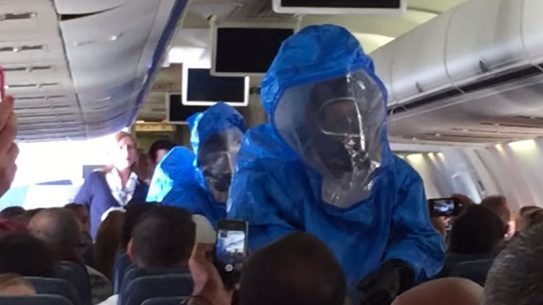 Ebola joke after sneeze results in man being escorted off of US Airways flight...