As public figures, politicians and cultural icons make bold statements about the Ebola virus, panic has begun to rise rapidly in the United States. CNN.com recently met with Ebola experts to discuss the truths, the lies, and the embellishments that are being spread in the media regarding the virus.

“If you bring two doctors who happen to have that specialty (Ebola) into a room, one will say, ‘No, it will never become airborne, but it could mutate so it would be harder to discover.’ Another doctor will say, ‘If it continues to mutate at the rate it’s mutating, and we go from 20,000 infected to 100,000, the population might allow it to mutate and become airborne, and then it will be a serious problem.’ I don’t know who is right.” — Martin Dempsey, the chairman of the Joint Chiefs of Staff, told CNN.

A mutation such as the kind Dempsey describes “would be exceedingly rare” in one epidemic, said Edward C. Holmes of Marie Bashir Institute for Infectious Diseases and Biosecurity at the University of Sydney.

“It happens over evolutionary time, millions of years,” Holmes said. “This idea that it takes one or two of those mutations and ‘Wham!’ you pick up airborne transmission, that is way too simplistic.”

“If someone has Ebola at a cocktail party, they’re contagious and you can catch it from them. — Sen. Rand Paul

Experts say the contact with an infectious person must be tactile, or direct touching, and involve bodily fluids — blood, sweat, feces, vomit, semen or spit.

People in West Africa are avoiding hugs and handshakes because the virus can be spread through the sweat on someone’s hand.

Related Stories: Can You Contract Ebola on an Airplane?

“The most comforting thing that I heard from (Dr. Brenda Fitzgerald, commissioner of the Georgia Department of Public Health) was that water kills the Ebola virus.”Georgia Gov. Nathan Deal told the Marietta Daily Journal.

In fact, water alone does not kill Ebola. Soap and water does. So does chlorine and bleach.

“As with other infectious diseases, one of the most important preventive measures is frequent hand-washing. Use soap and water, or use alcohol-based hand rubs containing at least 60% alcohol when soap and water aren’t available,” the Mayo Clinic said about the prevention and spread of Ebola infection.

“The U.S. must immediately stop all flights from EBOLA infected countries or the plague will start and spread inside our ‘borders.’ Act fast!” — Donald Trump said on Twitter.

During the SARS outbreak and H1N1 ‘swine flu’, travel bans were were put into place but the viruses were still able to enter foreign populations regardless of the the measures that governments took to keep them out.

No ban will completely stop people moving about the world, experts said.

“It gives us the false assurance that we can ignore the problems that are happening in Africa,” Wendy Parmet, director of the Program on Health Policy and Law at Northeastern University School of Law, told National Geographic. “At the end of the day, we can’t. And our own safety depends on our getting it right there, not on building the walls.” 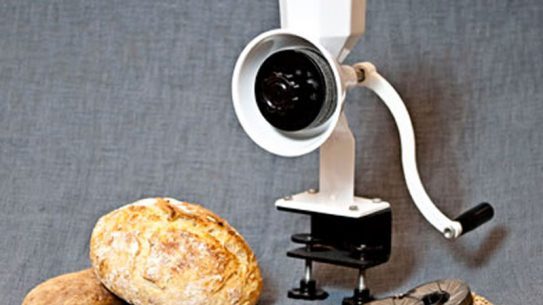 Milling Your Own Flour For Better Health

Embrace the off-grid lifestyle and take advantage of the health and budget-friendly benefits of...