The Make Ready to Survive instructional video series will debut both on DVD and HD streaming video in December with three titles from the series. Then additional titles will be released each month from January through April of 2015.

Unlike many reality shows on prepping and doomsday survival, the Make Ready to Survive videos are a true tutorial to help you and your family. Whether you live in the heart of the city, on the outskirts in a quiet neighborhood, or out on a farm, the Make Ready to Survive videos show you techniques that are critical for survival, review gear and supplies to have on hand, and all aspects of proper planning. Most importantly, the videos will bring you piece of mind.

“This was a pretty large undertaking for us. In order to get the shots we needed, our crew filmed on location in the everglades of FL, the back country of Ohio, the mountains of Colorado, and eastern Texas. Five instructors were selected to teach the series based on their background and life experiences. Each brought something different to the table and combined makes for one heck of a learning experience,” said John Tormey, Director of the Make Ready to Survive Series, in a statement released this morning.

The video series, like Panteao’s other series, is instructed by world’s most experienced and highly regarded instructors including former US Army Delta Operator Paul Howe, Dave Canterbury from the Pathfinder Self Reliance School, US Army Special Forces Green Beret Kyle Harth, disaster preparedness consultant and author Jim Cobb, and NE MacDougald, who started his career in Vietnam with the 519th Military Intelligence Bn (MACV), and today is an author and consultant.

“We received a tremendous amount of support from manufacturers and suppliers when we told them about the survival series.” said Fernando Coelho, president of Panteao Productions. “It was with their help that we were able to make this series possible. We originally thought we would have content for three videos. When we were finished filming we ended up with thirteen different titles in the series.”

For more information on the survival series as well and Panteo’s other insturctional videos, visit their website. 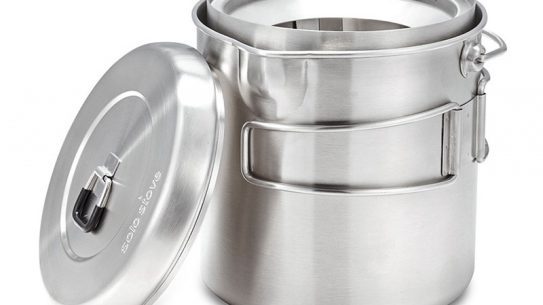 The Pot 1800 from Solo Stove is ideal for outdoor cooking with its folding...