Thirty soldiers, until recently stationed in West Africa, will be quarantined in Italy when they arrive Wednesday after leaving the Ebola-stricken region Monday morning, Army officials tell CNN.

The soldiers will join Army General Darrly A. Williams, commander of U.S. Army Africa, as well as 10 other personnel who are in “controlled monitoring” in Vicenza Italy.

Williams and his team have been in West Africa for 30 days, to set up the initial U.S. military assistance there and have traveled extensively around Liberia. The team was in treatment and testing areas during their travels.

There is no indication at this time that Williams or any members of his team have symptoms of Ebola, however, they are still being housed in an access controlled location on base, and are not allowed to go home for the 21 day period while they undergo twice daily temperature checks.

According to reports on CNN.com:

Officials could not explain why the group was being put under into controlled monitoring, which is counter to the Pentagon policy. The current DOD policy on monitoring returning troops says “as long as individuals remain asymptomatic, they may return to work and routine daily activities with family members.”

White House Press Secretary Josh Earnest said Monday that the Defense Department “has not issued a policy related to their workers that have spent time in West Africa.”

“I know that there was this decision that was made by one commanding officer in the Department of Defense, but it does not reflect a department-wide policy that I understand is still under development,” Earnest said.

However, on Oct. 10, Jessica L. Right, the undersecretary of Defense for personnel and readiness, issued a memo stating that troops who have faced an elevated risk of exposure to Ebola will be quarantined for 21 days — and that those who haven’t faced any known exposure will be monitored for three weeks.

This same memo outlines the Pentagon’s plans to train troops prior to the deployment to West Africa as well as procedures for monitoring them during their time in the epicenter of the Ebola outbreak. 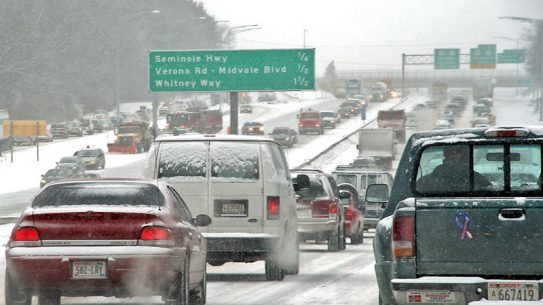 The Red Cross offers these tips about how to drive safely during a winter...