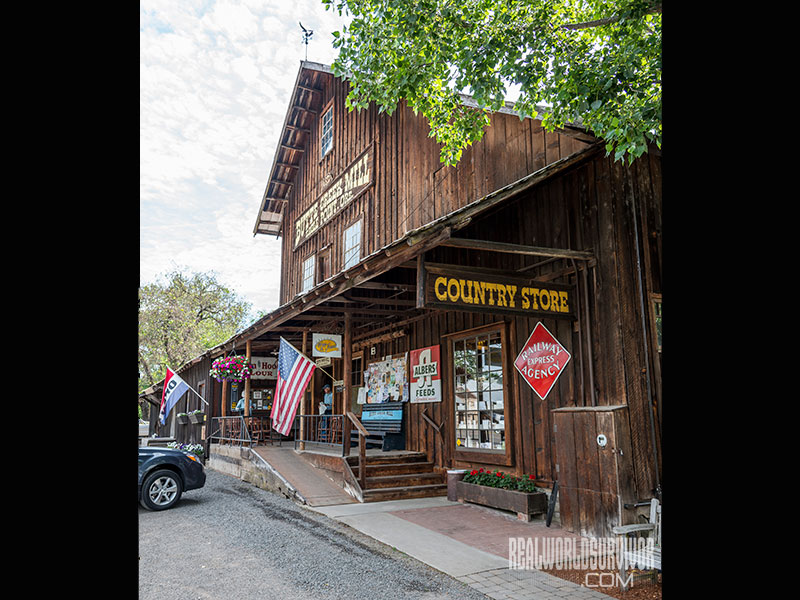 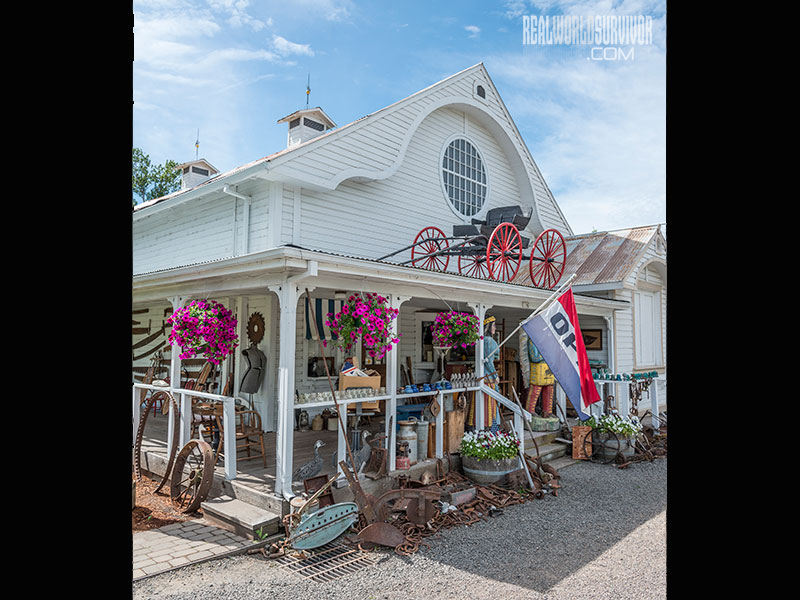 2 of 10
Photo by Thomas Kirchen
Antique Store
Bob converted the old shop next to the mill into an antique store filled with his treasures. The building needed extensive remodeling to comply with current building codes. 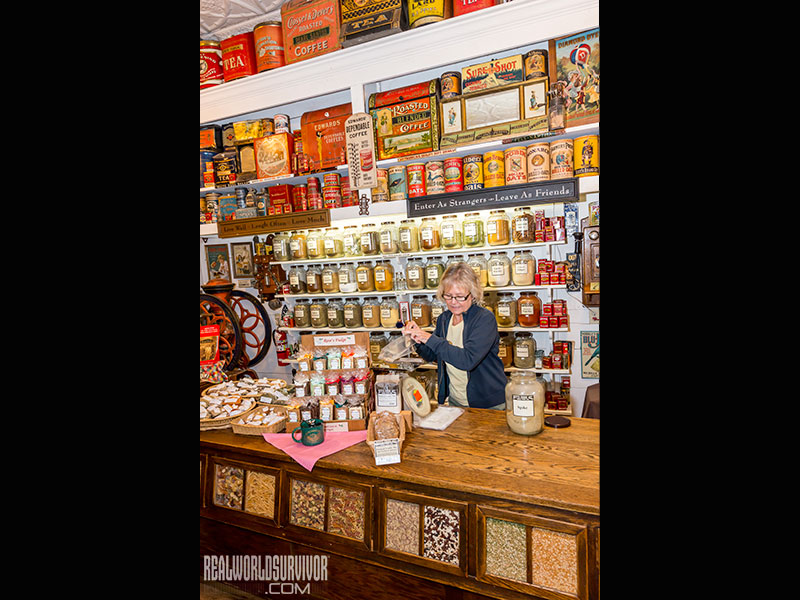 3 of 10
Photo by Thomas Kirchen
Working The Country Store
Debbie fills an order for spices, one of the country store’s most popular items. While raising her kids, she worked part time as a bookkeeper and started a business out of her home with friends. At the mill she runs the store, keeps the books and fills the web orders. 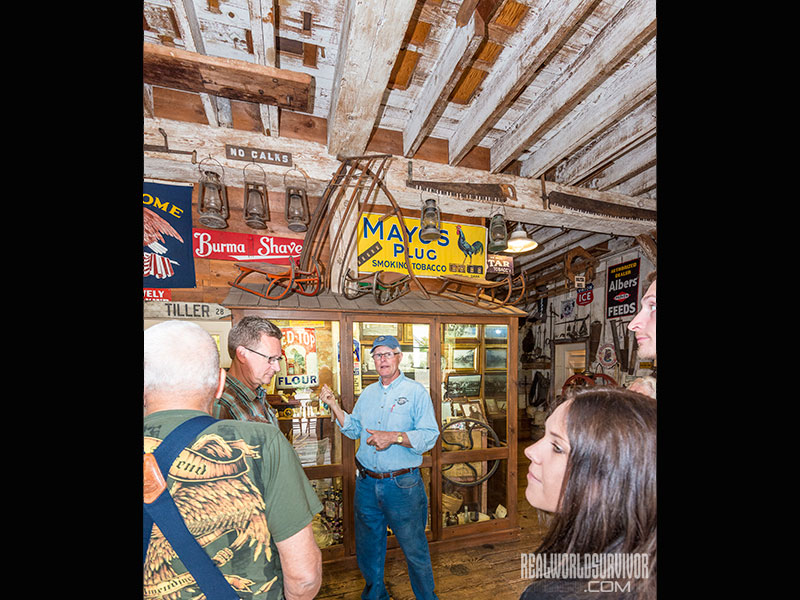 4 of 10
Photo by Thomas Kirchen
Mill Tours
Bob gives visitors to the mill a tour and explains how the mill operates. For someone who knew nothing about stone grinding flour a few years ago, he’s become very knowledgeable. 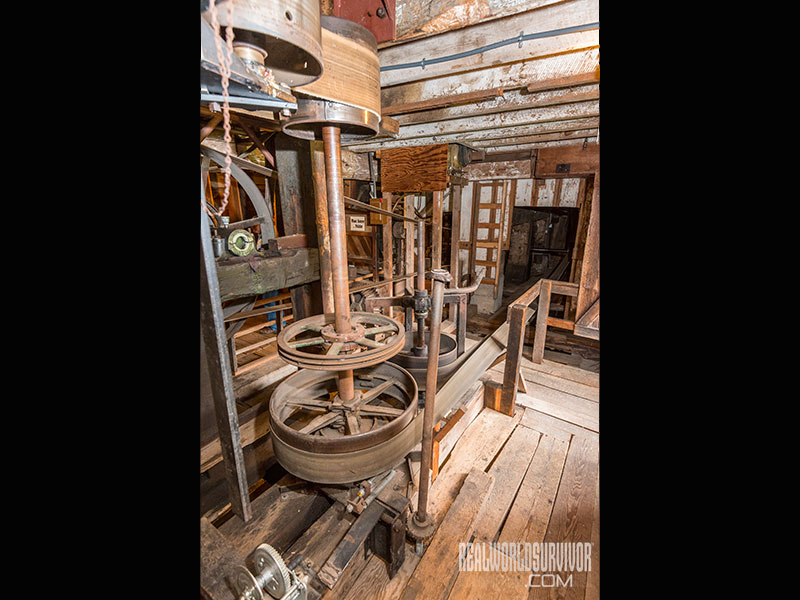 5 of 10
Photo by Thomas Kirchen
Powering The Mill
Powered by the turbine sitting 12 feet below in water, these belts and pulleys are part of the system that operates the mill. 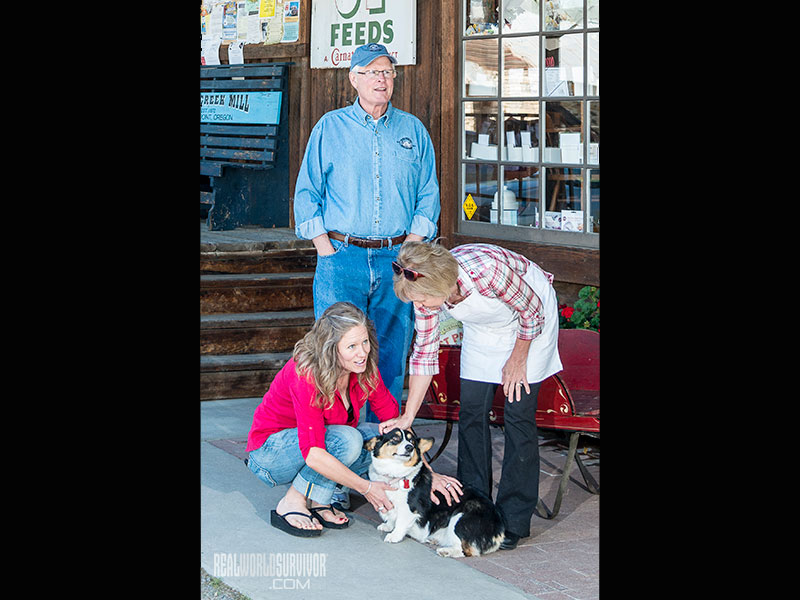 6 of 10
Photo by Thomas Kirchen
Small Town Charm
Kristin and Debbie pet a friend’s Corgi in front of the store while Bob watches a customer checking out stuff on the porch of the antique shop. 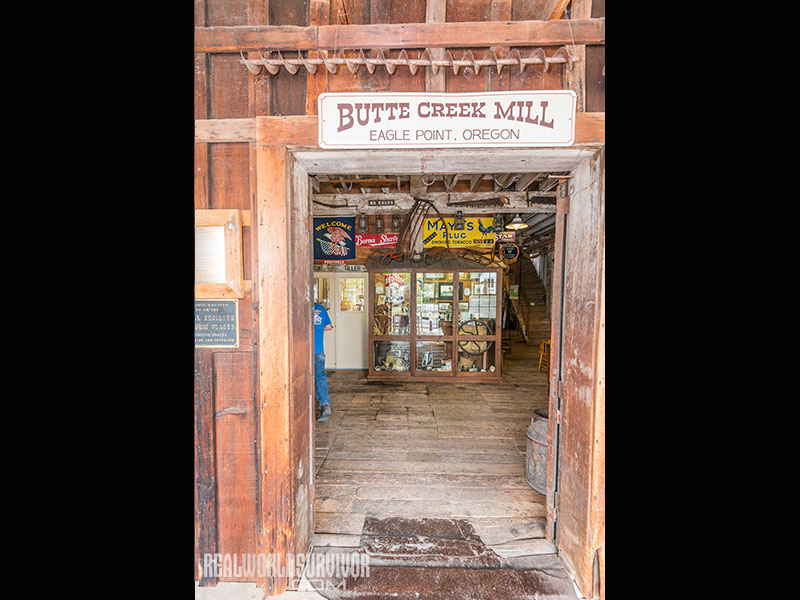 7 of 10
Photo by Thomas Kirchen
Entrance to Butte Creek Mill
The entrance to the mill, where farmers brought their grain to be ground and Klamath Native Americans brought leather goods and berries to trade for flour. 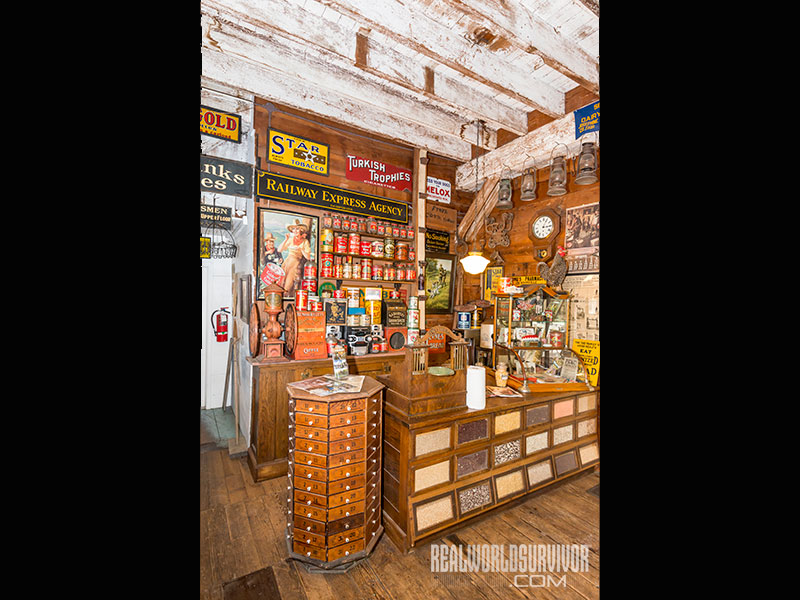 8 of 10
Preserving History
“Saving the building was my opportunity to preserve a bit of American history,” said Bob 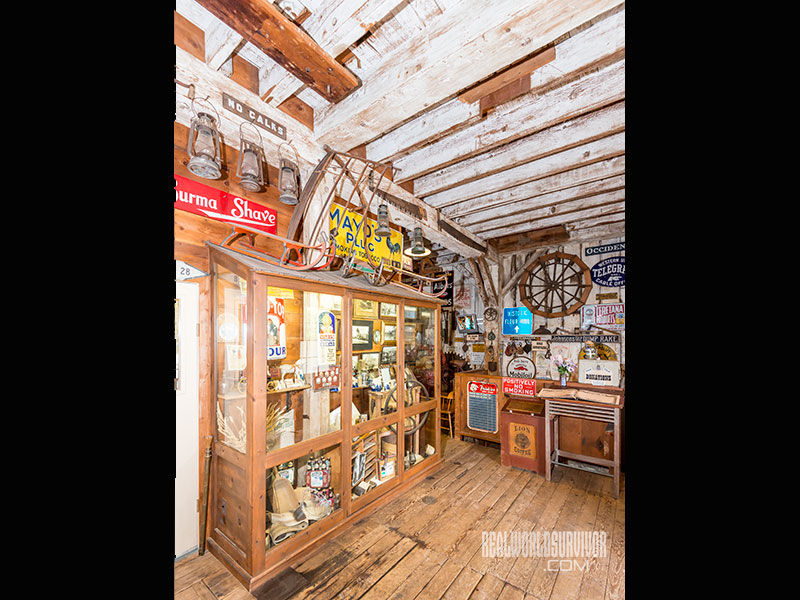 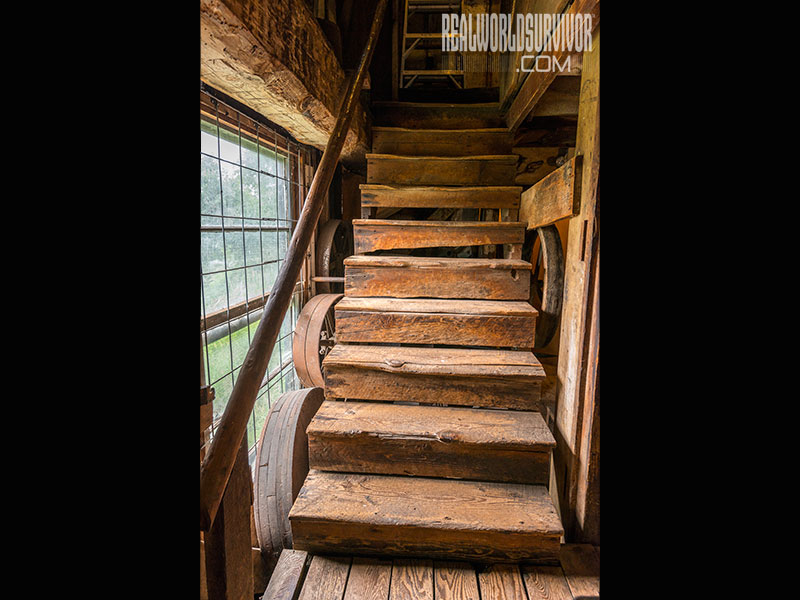 10 of 10
Photo by Thomas Kirchen
Original Structure
While much of the Mill had to be renovated to meet current building codes, there are many aspects of the mill that are original. 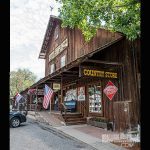 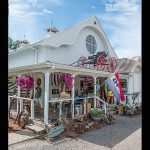 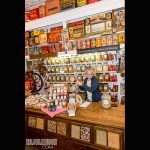 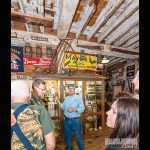 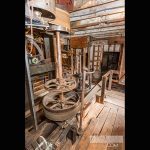 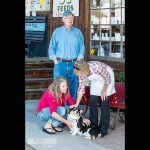 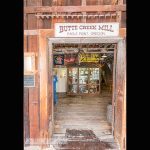 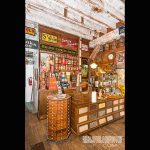 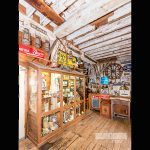 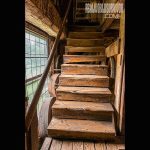 For 30 years I was a coat-and-tie guy, but I always wanted to own a country store or antique shop in a historic building,” Bob Russell said as we chatted about his new career as owner of the Butte Creek Mill and General Store in the small, rural town of Eagle Point, Oregon. Now a jeans and denim shirt guy, he gave me a roundabout answer when asked what possessed him to give up a good job and comfortable life to buy “the last water-powered grist mill, still commercially operating, this side of the Mississippi.”

“One day I overheard my wife, Debbie, talking to a customer who asked the same question. ‘I was able to do what I wanted,’ she said, ‘be a stay-at-home mom and raise our three kids—that was very important to me—while Bob supported us. When the opportunity to buy the mill came along, I figured it was time for him to do his thing.”

“His thing” was to own a place built during the glory days of the Old West, one where he could display and sell his collection of Americana and what he calls his “neat stuff”—old tin cans, posters, lanterns, stained glass, trunks, and so on—items that he has been collecting since he was nine years old.

In 1961 Bob’s family took a road trip to Carson City, Nevada, where he fell in love with the town and its artifacts—from the polished bars in the saloons to barber shop poles. “Maybe that’s where the idea of living in a small historic town came from, I don’t know,” he said.

One of five children, Bob grew up in Portland, Oregon. The collecting bug bit him early. At age nine, he spotted a Woodrow Wilson campaign button in a store. “I decided then I wanted to collect a button for every candidate in the presidential campaigns that used them. My mom liked that kind of thing, too, and she would take me to antique/junk stores in Portland looking for them. I have never lost my appetite for the treasure hunt, for anything that tells a good story.”

The kids in his family all had chores to do, and on Saturdays Bob would offer to go to the dump with his dad—if he could look for stuff. On his other treasure hunts he kept finding more. Before long, he was selling some of it.

“I was a paper boy and earned $15 a month. In Portland at the time, they were tearing down a lot of old buildings, and I would go looking for things to see what I could find. I found an old oak icebox one day and took it to an antique store to see what the owner said about it. She offered me $12 for it, and I thought, ‘This beats $15 for a month of delivering papers!’”

Along came college, where Bob earned a bachelor’s degree and met Debbie. Before long, they were married and the first of three kids arrived, and Bob took a job in sales with Proctor & Gamble.

“What an opportunity that was. When I would call on drug stores and talk to the managers, it was routine to ask if they had out-of-date merchandise they wanted us to buy back. I would get to go down in the basement and there would be all kinds of good stuff, in addition to outdated toothpaste.”

Bob’s collections kept growing. In his spare time he would go to auctions, conventions devoted to a specific item as well as read about antiques and collectibles. It also helped that he had a good eye both for value and for looks, and he also learned how to repair and restore his finds. Bob eventually left Proctor & Gamble and became a regional sales manager for Canon. The family’s house was too small for the kids and his “neat stuff,” so they bought a larger place.

In December 2004, Bob heard about some antiques for sale by the owner of the Butte Creek Mill, built in 1872.

“Debbie and I drove down there—it was so foggy we got lost—and I knew the second I walked in that I wanted the place. It smelled like ammonia from the walk-in meat locker. Debbie looked like a deer with headlights in its face. We put in an offer on the place, but it was turned down. Debbie was as relieved as I was crushed. We were going on a vacation and I said to the real-estate agent, ‘Just in case, let’s put in a backup offer.’ While on the trip we got a call from the agent. ‘You’re up. The mill is yours.’”

Bob had his dream—a historic building complete with a country store, and a flour mill, to boot.

Of course, then the Russells had to pay for the place, and they didn’t want a mortgage. Besides, Bob didn’t think a bank would lend on the building.

When he found out the offer was accepted, Bob gave notice at Canon and went to work selling some of his collections to pay for the mill. He knew he had good stuff and phoned auctioneers around the country to see if they would be interested. His timing was perfect—it was 2005, before the economy started to slide.

Some of his items brought record prices: A shooting gallery in the shape of a clown brought $23,000; a tin can of Planter’s Peanuts, $8,000; a penny arcade with a tug of war, $40,000. Hard as it was to part with them, Bob even sold some of his collection of campaign buttons. Before long, he had sold enough of his neat stuff to pay for the mill. He and Debbie now owned it outright.

“I was scared to make the change and thought Bob was crazy. What did we know about grinding flour? But it was an ideal time in our lives to move,” said Debbie. “Our children had all left home and we were ready to downsize, and Bob was tired of corporate life. When we got here, we were so busy I didn’t have time to think and the people we met were so supportive.”

The Russells took over as owners on June 2, 2005, and the daunting task of renovating the building and improving the business began. They worked seven days a week making repairs and remodeling while keeping the mill and store open. Fortunately, Mike Hawkins, the miller who worked for the previous owner, agreed to stay on. Both Debbie and Bob say they couldn’t have done it without him.

Debbie stood at the cash register, helped customers, kept the books and handled website orders. Meanwhile, Bob and his son, Scott, worked on the building, doing dirty jobs like tearing down the old meat locker that had 4 feet of frozen sawdust in it, which had to be thawed and hauled out by wheelbarrow. They moved truckloads of Bob’s stuff down from Portland. The old storeroom next to the mill became his antique shop but had to be extensively remodeled to comply with current codes. “Scott’s help made it possible,” said Bob.

Related Stories: Milling Your Own Flour For Better Health

Today, the Russell’s daughter Kristin helps out in the store, and Bob and Debbie are enjoying small town life. Bob is now the mayor of Eagle Point and has reinvigorated the sleepy town. And the mill is thriving once again, just as it did 152 years ago.

What advice would he give to people considering such a change? Would he do it again? “I say, follow your heart. I have never worked harder for less money or been happier. Go for it! You put in sweat equity, but it’s never enough. I still pinch myself. It’s a great adventure.”