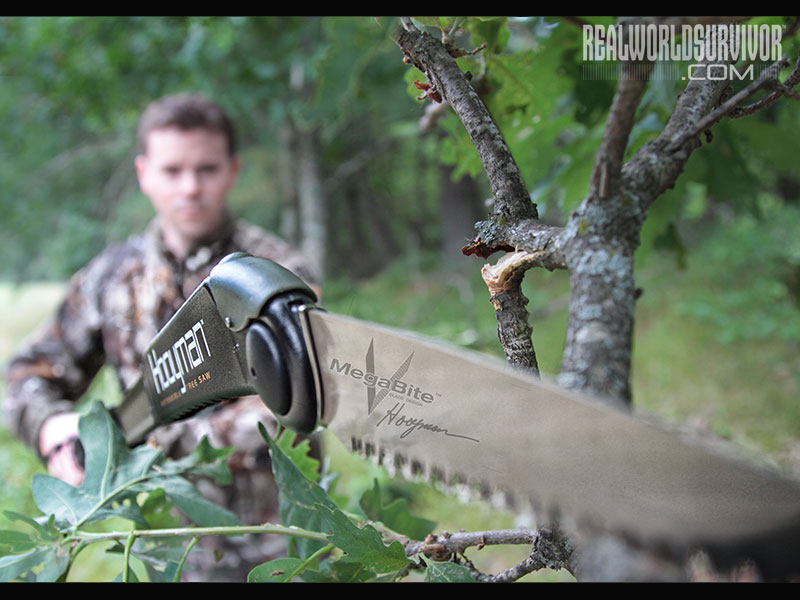 1 of 7
Photo by Hooyman
Hooyman Saw
The business end of the Hooyman saw, the MegaBite blade, makes for quick and easy removal of unwanted tree limbs. 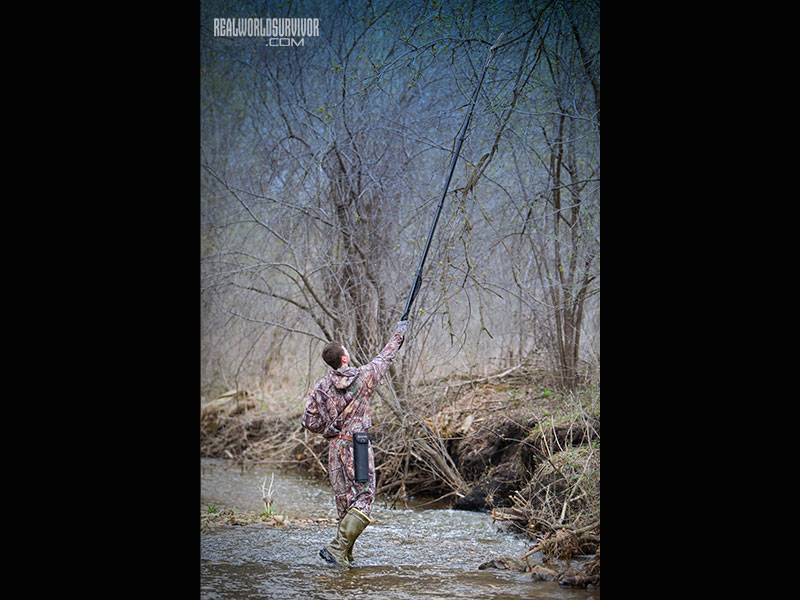 2 of 7
Photo by Hooyman
A Clean Shot
Bowhunting truly is a game of inches. One tiny limb or sapling can easily cost hunters a clean shot at a buck. 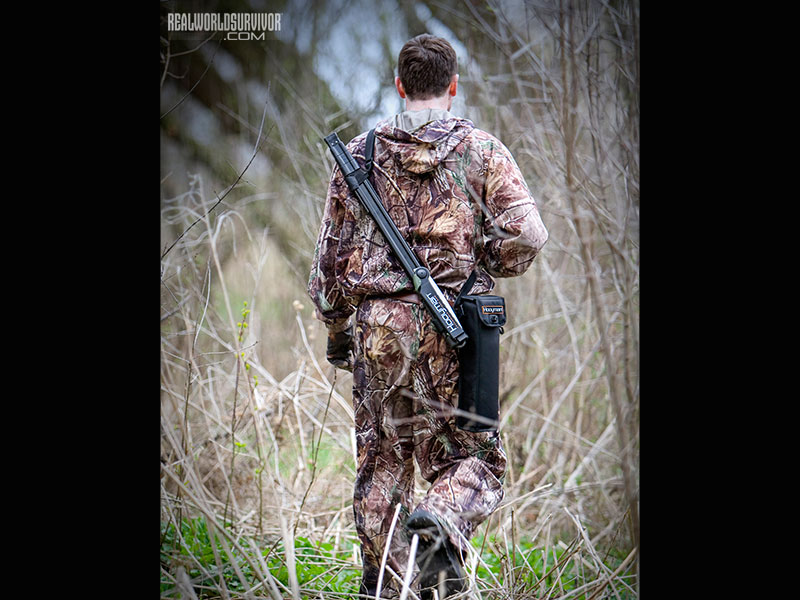 3 of 7
Photo by Hooyman
Easy Carry
The convenient carrying strap allows you to keep your hands free while walking to and from your treestand. I 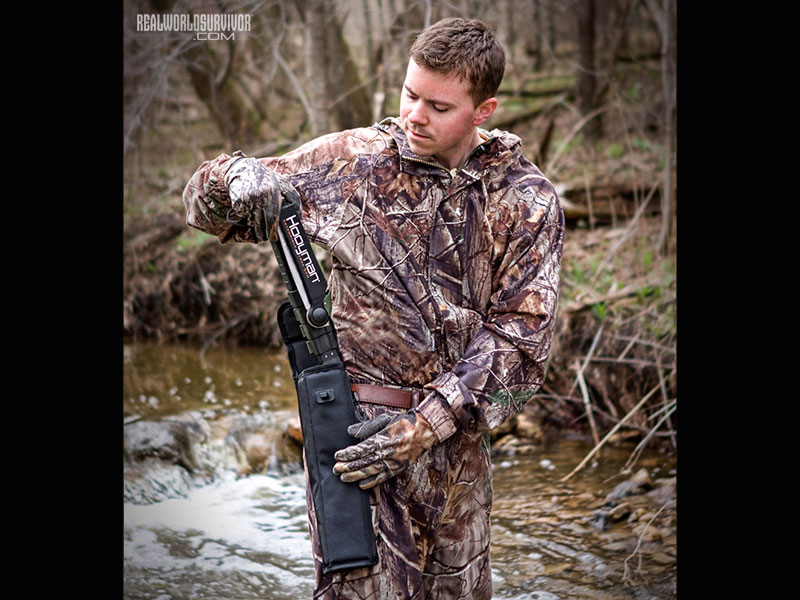 4 of 7
Photo by Hooyman
Versatile
The Hooyman Saw is foldable, extendible, portable and lightweigh 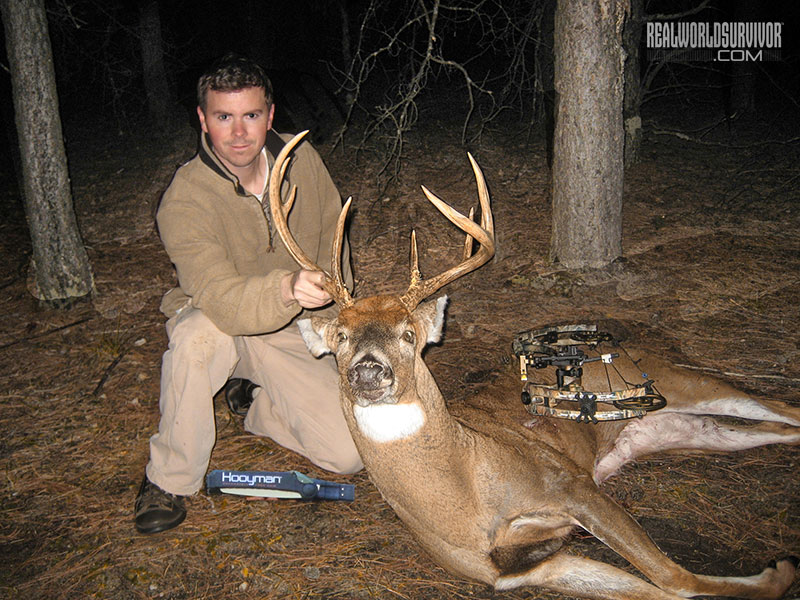 5 of 7
Snagging a Stag
Andrew Hooyman with a fine 9-pointer. 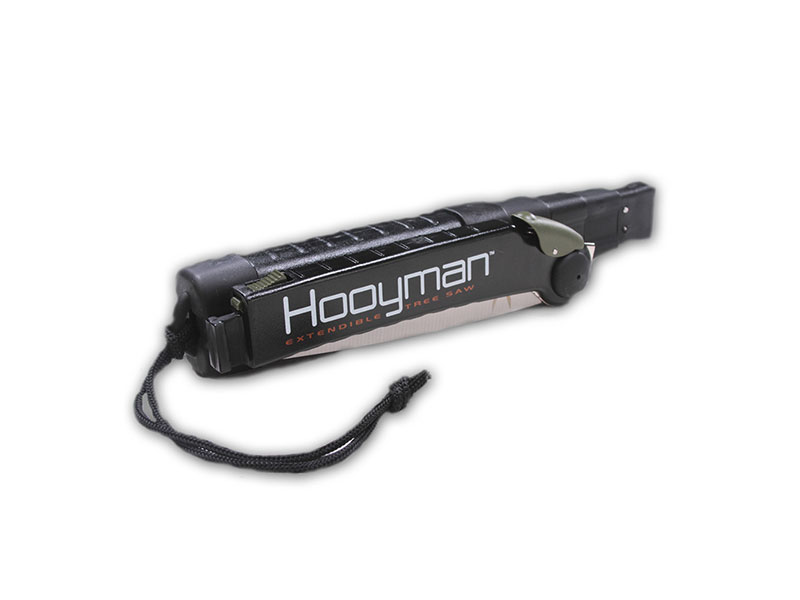 6 of 7
A Success Story
“Now at age 33, Andrew Hooyman, with his mother, father and brother on board, has 400 to 500 independent retailers, and their famous extendible saws are being sold in big- box stores…” 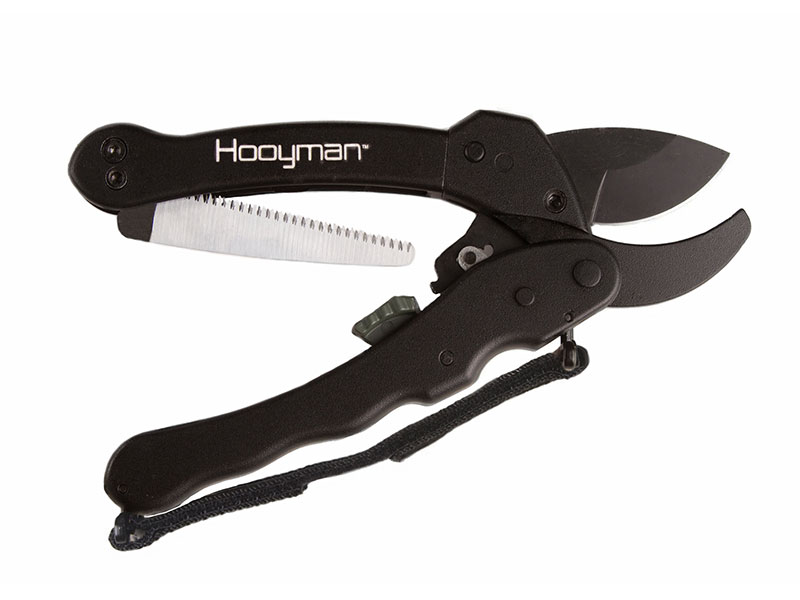 7 of 7
Hooyman Ratchet Pruner
To clear shooting lanes, use the Hooyman ratchet pruner to remove ground-level brush and its detachable saw to cut saplings and such. 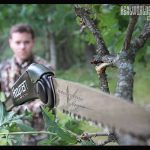 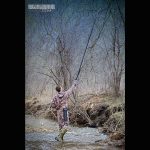 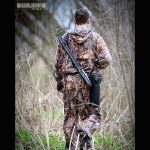 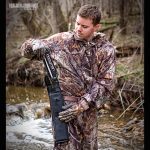 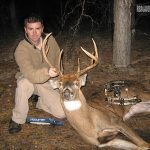 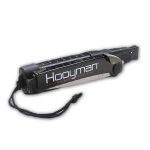 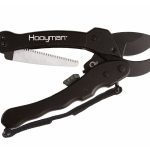 It was something Andrew Hooyman always wanted to do, and anyone who grew up with Hooyman knew that some day he would be a self-employed businessman. Indeed, ever since he was a young boy, Andrew dreamed of becoming an entrepreneur. He would think constantly about products he could sell and how he would advertise them. He desperately wanted to be his own boss, much like his father and mother who operated a very successful photography studio.

According to Hooyman, “Dad was creative and built the outdoor sets, the backgrounds and then snapped the photographs, while my mother did the advertising, marketing and accounting. I watched how they ran the studio and how important it was for them to maintain customer satisfaction. I knew early on that someday I wanted to impart those same qualities to my own business ventures.”

Hooyman also thought a lot about bowhunting, the second passion he shared with his father. “I loved being in the woods at first light with dad and watching how the animals interacted with their environment. It soon became apparent that hunting was in my blood, and when I was not thinking about starting my own company I was thinking about being outside hunting deer with my bow and arrow. The hunting instinct was indeed strong in our family, and soon I was wondering how I could combine my love of the outdoors with my goal of becoming a successful business man.”

Although a daydreamer throughout his childhood, Hooyman did not neglect his studies. He excelled in the courses and work-study programs that he thought might help him run his own company and earned a degree in business from the University of Wisconsin-Whitewater. Upon graduation, several job offers were placed before him, but he did not want to work for someone else—he wanted to be the boss and head his own firm. Even so, he was still faced with a conundrum: What could he sell that would utilize both his business acumen and his love of the outdoors?

At first, Andrew Hooyman started a small outdoor-related company that purchased and sold overstock merchandise. “I sold directly to retailers and attended consumer shows regularly. It was a good experience and I worked hard, but I soon learned that there was not enough money involved for me to make a solid living. I needed something else to present to the outdoor marketplace. I needed to create my own brand. But what could it  be?”

One morning, while bowhunting for whitetail deer with his father, Andrew needed to trim some shooting lanes. “I could cut those branches that I could reach by leaning out from the stand, but there were others that were just too far out of my grasp to safely trim. We were aware that several pole saws were available on the market, but some of these units were too heavy and cumbersome to bring with us to our hunting area. Others were too expensive and still others were too flimsy to effectively trim larger branches. What we needed was an affordable, foldable, extendible, portable and lightweight saw that could easily and safely trim branches several feet from our treestands.

“The more we thought about it, the more we were convinced we were on to something. We had two problems that we had to overcome, however. First of all, many pole saws were too flexible, leaving them difficult to use and basically ineffective when the pole was fully extended. You simply could not put enough pressure on the pole to cut those large and far-away branches without the unit bending in the middle. We solved this by constructing the pole with an I-beam configuration. That gave the pole rigidity when it was fully extended, allowing us to exert sufficient downward pressure to easily cut through large branches.

“Secondly, we needed to improve on the latching device. All too often the extended pole would slip, causing it to collapse upon itself. This is where dad’s photography experience with tripods helped us out. He developed a positive metal-to-metal locking system that prevented the pole from slipping and collapsing.

“We were even more excited now that these two unique features were in place. After applying for a patent, we attended our first consumer show, the Archery Trade Association Show, in 2008. We only had a prototype saw to show prospective customers, but we were well received and took lots of orders.”

Andrew began thumbing through magazines and opening up websites to study those outdoor companies whose advertising he admired. Then he called the marketing manager at these publications and picked their brains. He wanted to know how they presented their products to the public, how they chose certain themes and when they advertised. Andrew added, “I also wanted to know who did their graphics, and how they went about getting that done.” He realized that those companies all had the same advertising agency, and he called that agency to set up a meeting.

“I wanted my own brand of advertising. I wanted to let customers know that we have a unique product. I wanted them to know why we believe it would be useful to them in the field and how it will make their time afield more productive. I wanted to educate them to the many benefits and features our saw has to offer, and I wanted our potential customers to know how different our saws are  compared to other similar saws now on the market. In essence, I wanted the story of Hooyman Saws to be told. I did not want just a slew of pretty advertising images slipped into a magazine.

“Sales reps liked our product and spread the word. Eventually, outdoor writers got wind of our saw, tested them on hunts and began writing articles about the saw’s usefulness. Their testimonials gave us more exposure and let our customers know that Hooyman saws are being used by some of the best-known outdoorsmen in the country.”

Now at age 33, Andrew Hooyman, with his mother, father and brother on board, has 400 to 500 independent retailers, and their famous extendible saws are being sold in big-box stores like Cabela’s, Bass Pro Shops, Canadian Tire and Gander Mountain. But he is not resting on his laurels. Not for a minute!

Hooyman has recently launched the new Ratchet Pruner—a pruner and detachable handsaw in one convenient package. This new multi-tool is a perfect match for hunters and homesteaders alike.

For more information and videos of Hooyman tools in action, visit hooymansaws.com or call 920-733-3870. 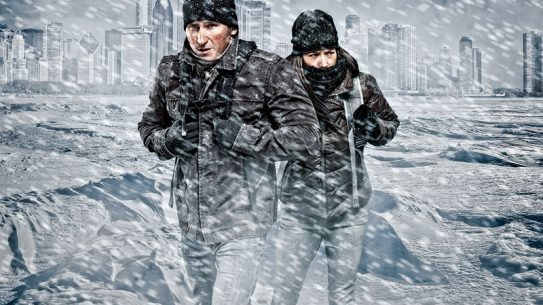