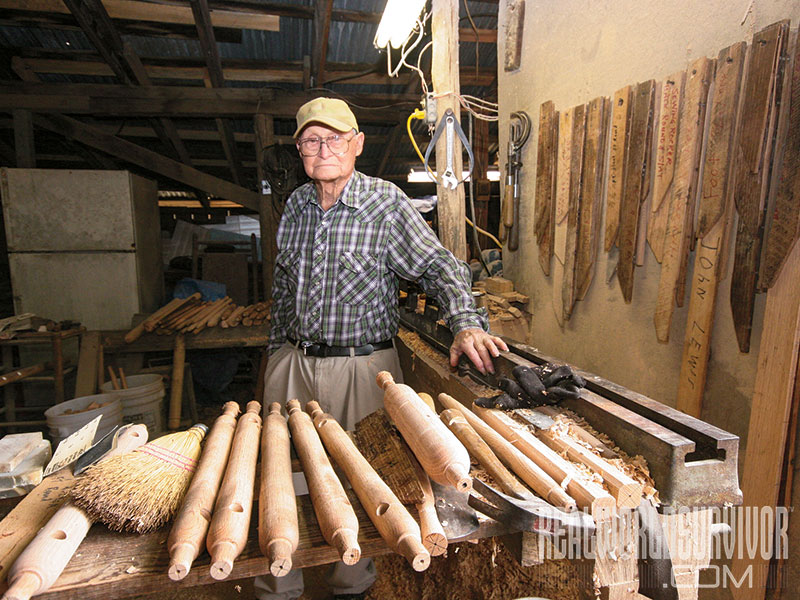 1 of 7
Dallas with chair parts
Dallas enjoys turning wood today as much as he did when he first started making chairs. Here he has just finished turning a leg. 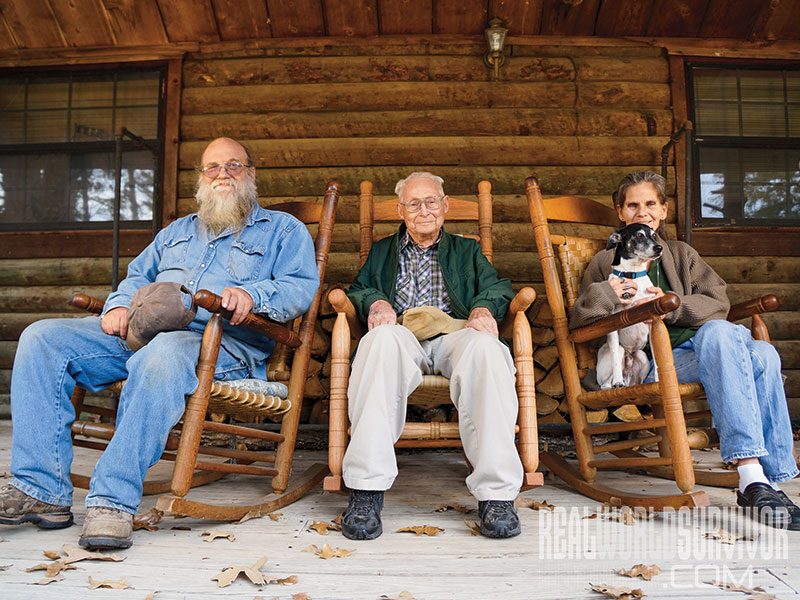 2 of 7
The Bump family
From left to right: Leon Sutton, Dallas Bump and Donna Sutton sitting in Bump rockers on the front porch of the Suttons‘ log home. 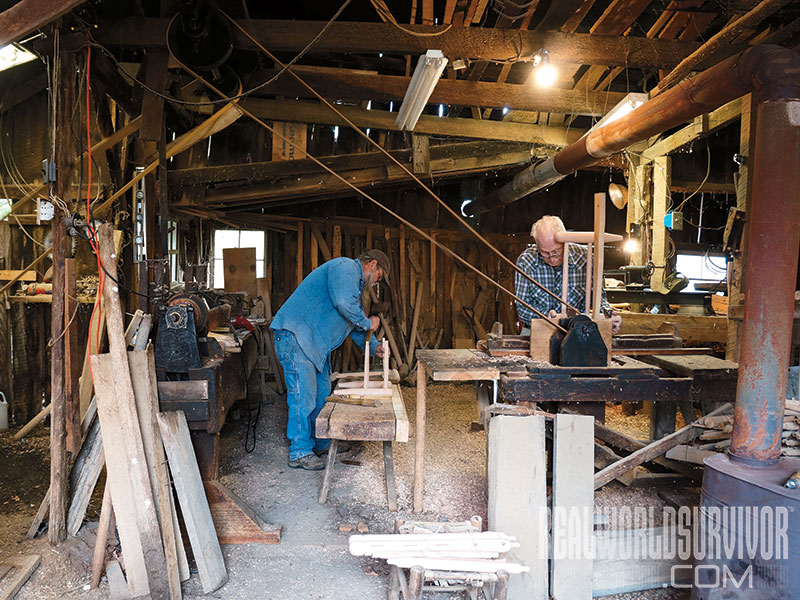 3 of 7
The Bumps at work
Leon and Dallas assembling rockers. The tight fit is achieved by curing the wood. The posts and frame are half dried, then “we drive them together and they shrink down to make the lock,” said Leon. 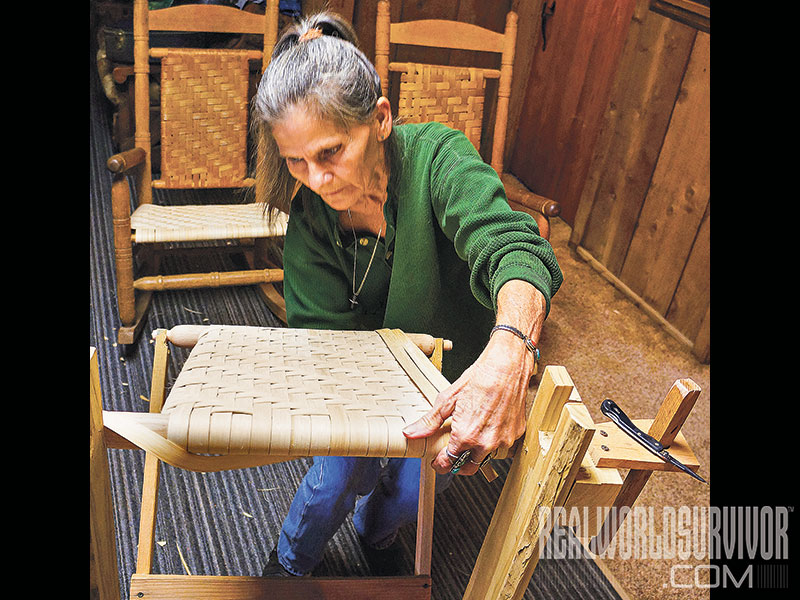 4 of 7
Donna working
Donna uses the same pattern that has always been used for the Bump seats. She weaves two strips of cane over and two strips under. 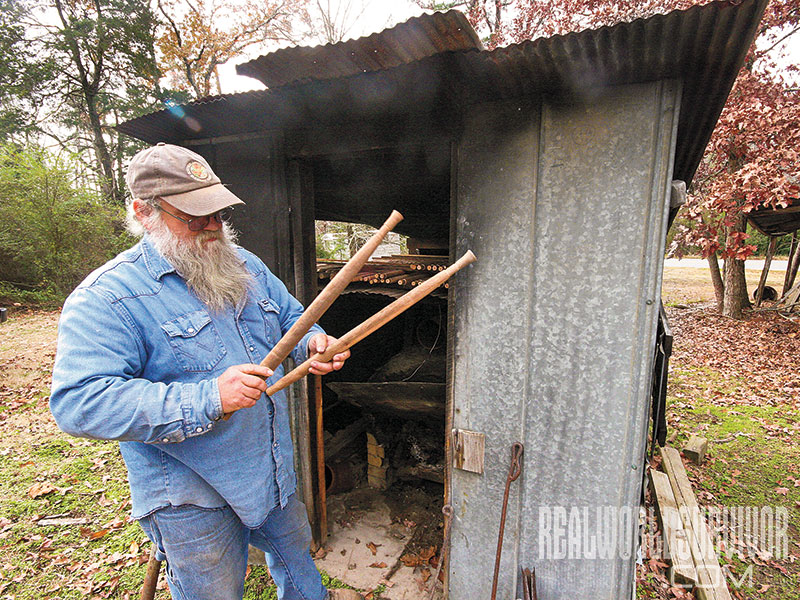 5 of 7
Leon testing wood
Leon tests wood to see if it is dry enough. He cuts the trees and puts them in the kiln to dry for about two weeks. When ready, these two chair spindles tapped together sound like “hollow bones.” 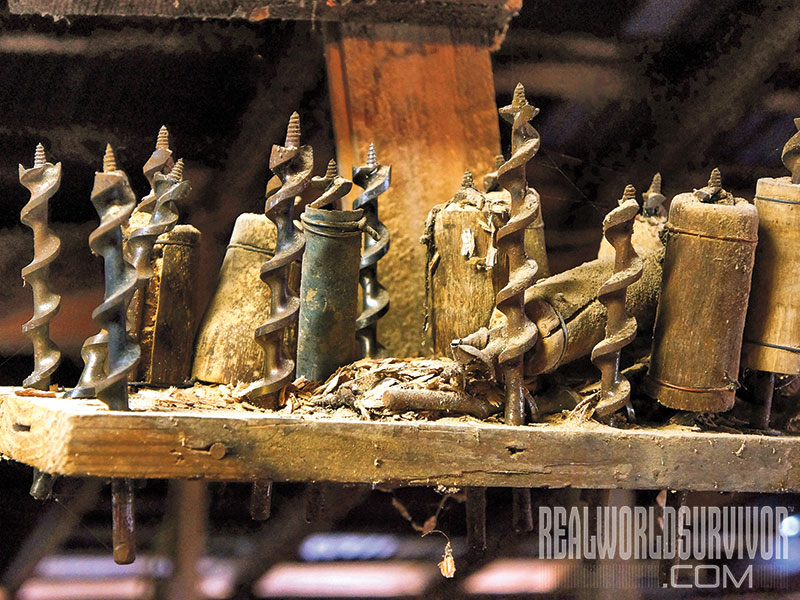 6 of 7
Tools
Some of the tool bits used in the Bumps’ workshop. 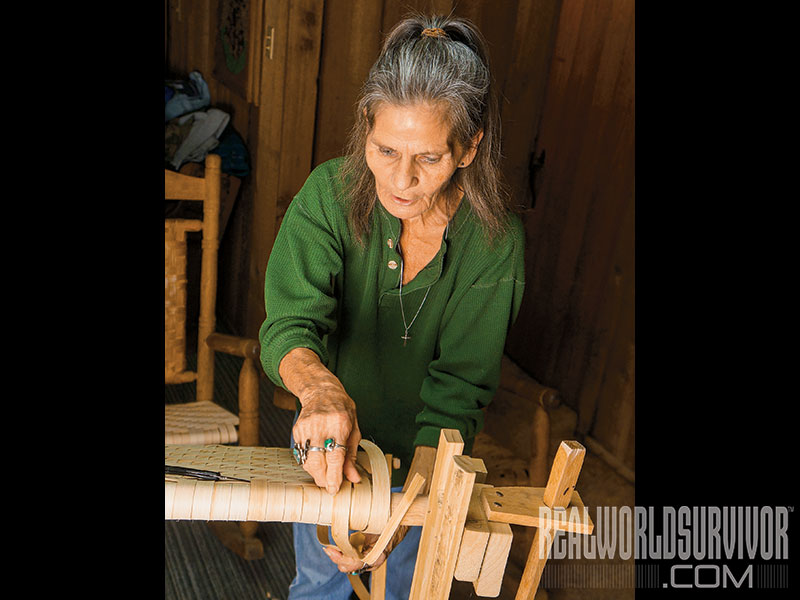 7 of 7
Donna caning
Donna Sutton weaves cane to make a chair seat. She learned how from Dallas’ late mother. She says that weaving cane is a lost art today. 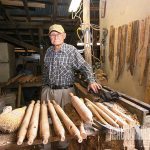 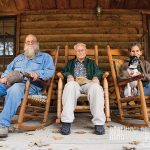 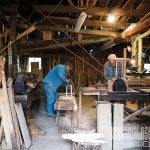 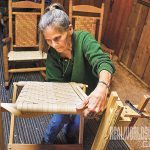 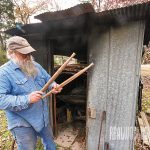 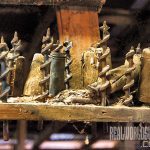 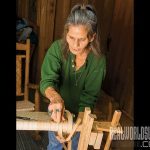 On the roads that cut and curl through the Ouachita Mountains near Bear, Ark., nearly every house sports a front porch with a view. And parked on plenty of those porches is a rocking chair made by the Bump family.

Since 1870 the Bumps have been handcrafting red and white oak rocking chairs with woven seats. Little has changed through the decades other than the addition of electricity to the dirt-floored 1880s livery barn turned workshop. The same tools, patterns and methods are used today by Dallas Bump, 97, his nephew Leon Sutton, 64, and Leon’s wife Donna, 64, as were used by Dallas’ father and grandfather.

We watched as Leon cranked up the old gasoline hit-and-miss engine and a series of belts rumbled loudly to life and powered the century-old machinery. Dallas secured a square chunk of red oak on the lathe, and wood shavings soon piled up on his hands and tumbled through the air as he expertly worked his gouge over the spinning wood, reshaping it into a smooth, round side post.

“I’ve always liked the turning,” said Dallas, who started helping in the chair shop more than 80 years ago when he was in grade school. “I could sit there for two hours at a time watching my dad turn. Daddy kept me busy keeping water in the old engine. Water was used to keep it cool, like a radiator.”

All hands were needed in the family’s chair-making business as the craft was passed down from one generation to the next. Dallas apprenticed under his father, Fred Bump, who learned the trade from his father, Philander Bump. Philander, who migrated from France, learned furniture making from a master European craftsman. He and his father-in-law Wiley Rouse, who homesteaded in the Ozark mountain community, developed the Bump rocker.

“The same tools, patterns and methods are used today by Dallas Bump … as were used by Dallas’ father and grandfather.”

Chairmaking thrived in this hardwood-rich region in the 1920s and 1930s. Dallas remembers five or six chair shops operating within five miles of the family home. His dad would pile the truck with chairs and peddle them on the winding mountain roads to shops along two routes.

Today, the chairs don’t need to go on the road. Customers come to see the chairs and place their orders at the Bear Chair Shop next to Leon and Donna’s log house in Bear, Arkansas, a hamlet between Hot Springs and Mount Ida. The livery-turned-workshop is a mile or so away at Dallas’ place.

Nothing is hurry-up about the old-fashioned chair crafting and the family always has a backlog of orders to fill. Leon selects and cuts the trees, mostly red oak, then dries the wood in an outdoor, wood-fired kiln.

“No glue, bolts or nails are used in the chairs. Instead, the snug-fitting parts are achieved by curing the wood.”

“It takes two weeks if the weather’s good,” Leon said. He removed some of the chair spindles from the kiln and tapped them together.

“Hear that? They sound like hollow bones when they’re ready,” he said.

No glue, bolts or nails are used in the chairs. Instead, the snug-fitting parts are achieved by curing the wood. Spindles are fully dried, whereas other chair parts are partly dried.

“The posts are half dried so they won’t crack. We half dry the frame,” Leon said. “Then we drive them together and they shrink down to make the lock. After about two days you can barely take a chair apart.”

The chairs are assembled one by one on the same nicked and weathered bench where Dallas sat as a boy. Leon bores holes in the posts, then uses a cut-down axe to pound the spindles into the posts.

Donna weaves thin strips of white oak for seats and backs, an art she learned from Dallas’ late wife, Amelia, who learned this skill from her mother. In warm weather, Donna works on the front porch, then moves the weaving indoors during the winter.

She dampens the strips in a tub of water to make them pliable and uses a pocketknife to notch and split the strips. She then weaves a pattern of two strips over and two strips under—the same design the family has always used. She and Amelia used to weave the chair seats on their laps, but now Donna clamps the seats on a stand that Leon built. It’s easier on her back.

“It’s a lost art,” Donna said about the weaving. The women used to have timed races to see who could weave the fastest. After years of experience, it now takes Donna about an hour and a half to complete a chair bottom.

The rockers, which Leon cuts with an old band saw, and the arms are the last pieces to be assembled on the rocking chairs. The Bump family makes rockers in sizes for children and adults. The family’s popular “John Lewis” rocker, so-called since the 1930s, is built for ample bodies and named in honor of a local man.

The Bumps stain some of the chairs and leave some natural. The chairs sell for $300 to $500 today. They also build craft stools and double loveseat rocking chairs.

Parked on Dallas’ porch is one of his favorite rockers, which his dad made in the 1930s for a local shopkeeper. One of the arms is extra wide to serve as a desk where the shopkeeper could sit and figure his account books.

The Bump chairs are famous in these parts and well beyond. Dallas was named the 2013 Arkansas Living Treasure by the Arkansas Arts Council and his chairs have been exhibited at the Smithsonian Center for Folklife and Cultural Heritage.

Donna said that the best part of the chairs is the comfort they provide. “You can just curl up in one, look around and reminisce. It’s relaxing.” 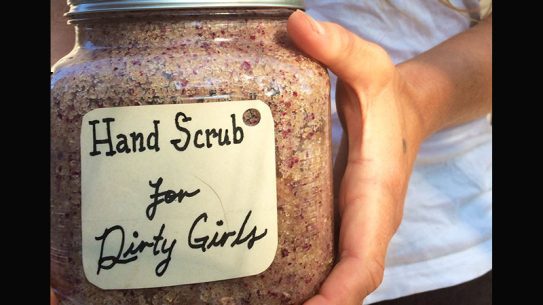 How To Make All Natural Moisturizing Hand Scrub

Use this sweet-smelling scrub to clean even the grimiest hands