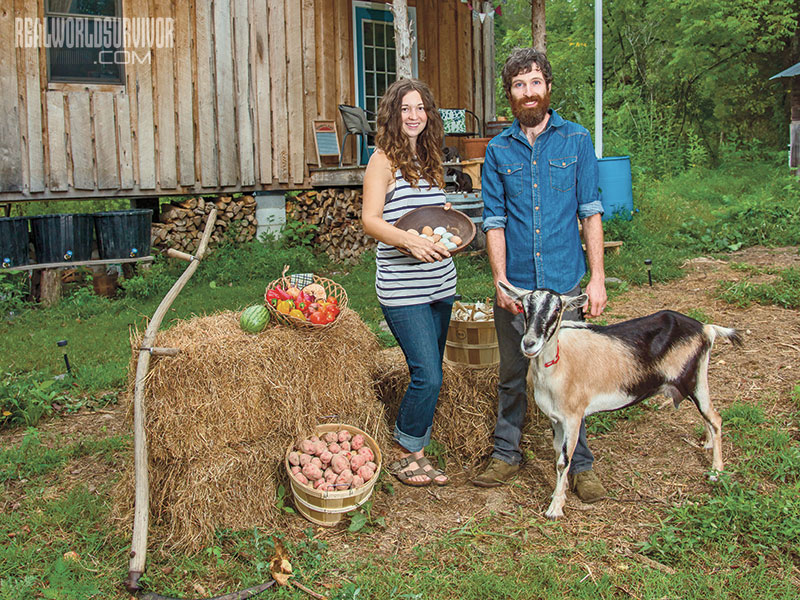 1 of 5
Photo by Thomas Kirchen
Rough Draft Farmstead
Hannah and Jesse in front of the cabin they built with the help of friends. They hired professionals to do what was beyond their expertise. 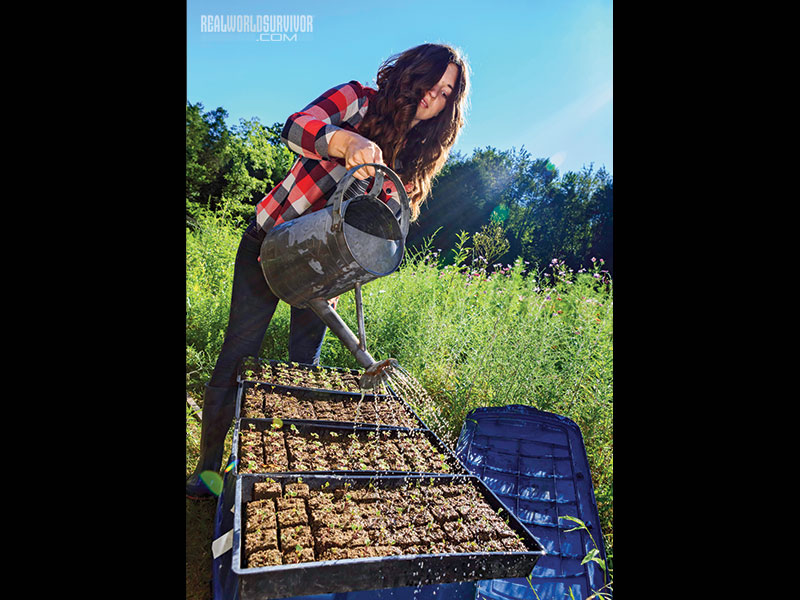 2 of 5
Photo by Thomas Kirchen
Rough Draft Farmstead
Hannah and Jesse start seeds on a continual basis to meet the demands of their CSA members and for their own cooking. 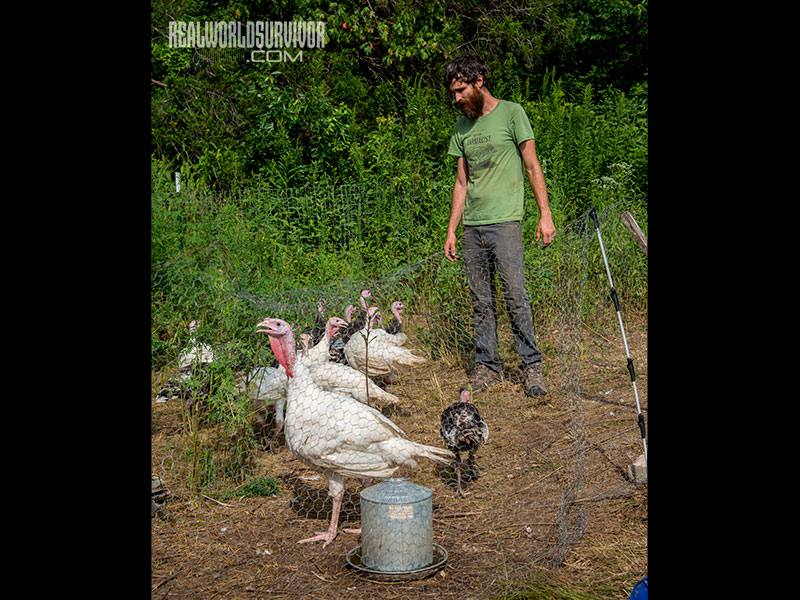 3 of 5
Photo by Thomas Kirchen
Rough Draft Farmstead
Jesse checks out the turkeys in their pen. So far, Rough Draft has five. They are foraging on ground he wants to plant. 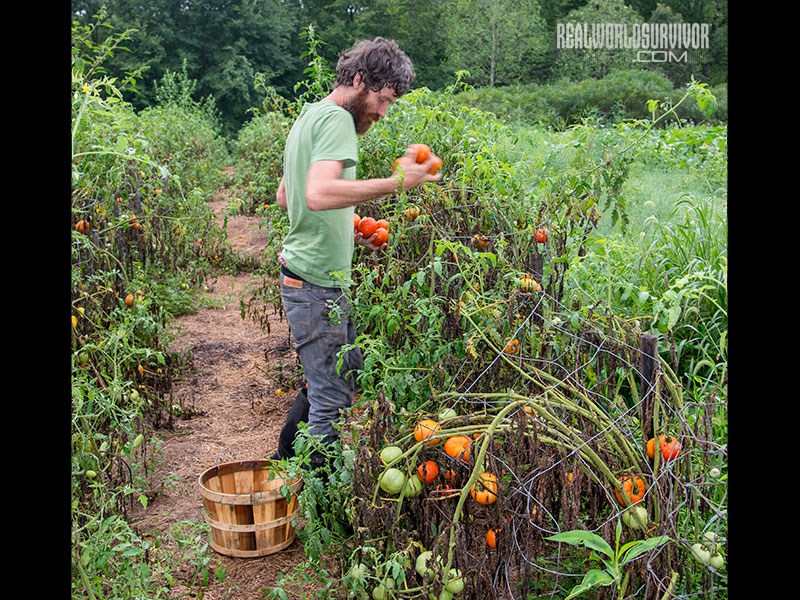 4 of 5
Photo by Thomas Kirchen
Rough Draft Farmstead
At the end of summer, Jesse harvests the last of the tomatoes. 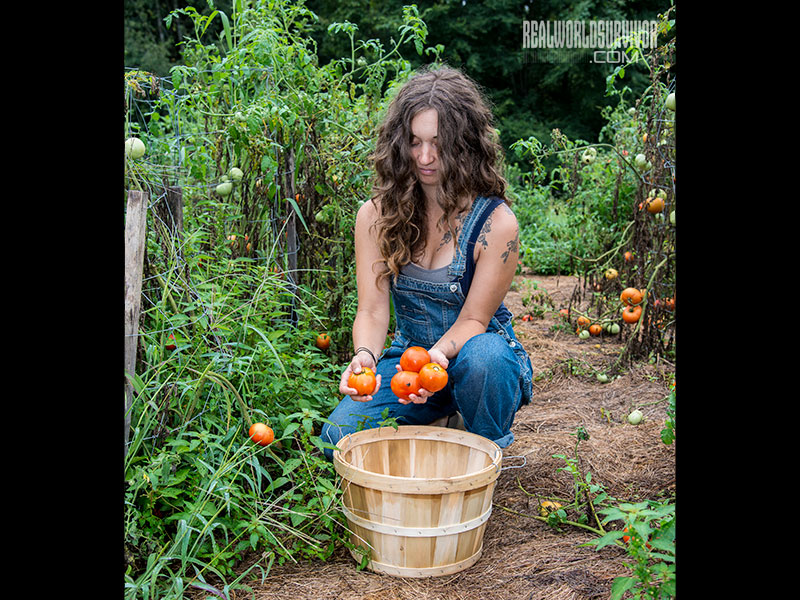 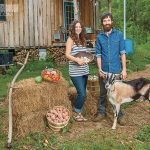 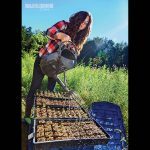 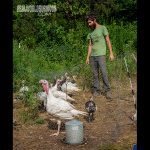 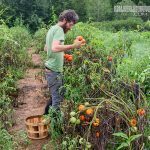 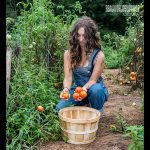 Close your eyes and imagine for a moment your off-grid dream life. What does it look like? A little cabin in the woods? Growing most of your own food? A high tunnel? Some livestock? Perhaps a little farm business to provide a small amount of income?

Chances are the scenario you just imagined is something very similar to the life of Hannah and Jesse Frost, the duo behind Rough Draft Farmstead in Gamaliel, Kentucky, population 371. Just a few short years ago, Hannah and Jesse were living in Chicago and New York City, until they felt the tug of going back to the land. Now they have developed a beautiful working homestead that includes a 560-square-foot log cabin and a 20-member CSA. For anyone looking to get out of the rat race, the Rough Draft Farmstead story is both inspirational and informative.

Hannah and Jesse left their big city lives to pursue agriculture through a desire to immerse themselves in the food system. Hannah was working as an artist in Chicago when she met a group of urban beekeepers who became the catalyst to make her want to know her food. Jesse developed a love for biodynamic wine while working in a specialty wine shop in New York City. His aspiration to become a winemaker led him to the realization that he needed to get to the real roots of wine—the soil.

All it took was some basic web searching by both Jesse and Hannah to find a little farm called Bugtussle in rural Kentucky that seemed like a great place to be an intern and learn the basics of farming. There they met and fell in love. It seemed like a foregone conclusion that after getting married, they would be on the search for a farm of their own.

Their long journey to find a place included several failed attempts at purchasing the right land for their farm. Deals fell through, plans changed and they experienced the frustrations faced by many homesteaders who do not have access to family land or vast capital resources. Despite the hard times, the two persevered and eventually found themselves back where it all began—at Bugtussle.

Eric and Cher Smith of Bugtussle Farm rescued Hannah and Jesse by offering them a piece of their own farm for sale. It was a win/win situation, giving Rough Draft a permanent home and allowing Eric and Cher to get some much-needed help around the farm.

While perhaps unconventional, Jesse said that the arrangement has worked out great for them. “We have our mentors a stone’s throw away. We still have so much to learn and having access to their wealth of knowledge is so helpful. It makes sense for them, too, because it is just the two of them and they have three small children. It is too much for them to do all of that by themselves, so we can help them. Since we are still learning this property and don’t have a lot of garden space, it works out.”

Hannah and Jesse immediately set to work on building both a place to live and a new CSA membership base. It soon became apparent that doing both things at once was seemingly impossible from a financial standpoint. They weren’t looking for much by any stretch of the imagination, but after several false starts, their homestead startup budget was completely depleted. They did the only thing they could do—ask for help.

The couple started a crowdsourcing campaign using the site IndieGoGo.com to fund their cabin. They turned to friends, loved ones and long-time blog readers for support. They were asking for $8,500 but the goal seemed pretty lofty. In the end, the campaign raised the full amount and they were able to begin work on their cabin immediately. While the online fundraising route may be unconventional, it was a good fit for Hannah and Jesse who were already choosing an unconventional lifestyle anyway. The “virtual barn raising” of sorts harkened back to the day when neighbors joined together to help neighbors accomplish their goals.

“Everyone wants to be Thoreau,” Jesse said. “We all want to go out into the woods and disengage from society, but I think there’s something really special about doing the opposite, which is still going into the woods but engaging others to help you.”

While this plan wouldn’t work for everyone or every farm, it succeeded for Rough Draft Farmstead in part because of the time they have invested in building their online presence.

“It may seem stupid that we are living off-grid and have to take time to work on our blog when we go to town, but that is how things are now,” said Hannah. “It is so necessary. For us it has been invaluable to have an online presence. It literally built our house. If we needed anything, we know that we have a lot of readers we can turn to at any point who would help in any situation. Many have turned into both real friends and real customers.”

Just as their cabin came together, so did their CSA. Going with the community-supported agriculture model was a no-brainer for Rough Draft, especially after watching Bugtussle Farm succeed as a CSA for many years.

“As far as a sustainable model for small-scale farming, having a small CSA and selling market vegetables is really a good choice,” Jesse explained. “You do your CSA in the middle of the week and sell your extra vegetables on the weekend when the market is busy.”

Now, a few years into life on their new property, Hannah and Jesse have settled into their dream life. It is unbelievable hard work, but they insist that it is more manageable than one might imagine. They still have no electricity of any kind and no running water.

“There is just so much work to do on the farm. We’ve had the stuff to hook up the water from our spring for a while, but it seems there is always something more pressing that needs tending to,” Hannah said. She was elated when Jesse surprised her with a real outhouse after months of the bucket-in-the-woods method, which wasn’t any fun in inclement weather.

Solar panels are on the long-term list—the house is already wired for power and waiting. “We do hope to get solar panels eventually,” Hannah continued, “but we still won’t be looking to power the things most people are looking to power, like a refrigerator or a television.”

Since they have no refrigeration, Hannah and Jesse eat most of their food fresh, canned or fermented. The few things that require cooler temps are stored under the house in a cooler. They use frozen milk jugs, stored in a neighbor’s freezer, to keep these items cold. “In some ways, this is our biggest challenge,” said Jesse, “but in other ways, it just isn’t. We have access to so much fresh food here.”

Though the cabin is done, they continue to work cooperatively by farming alongside their mentors, Eric and Cher Smith of Bugtussle Farm. For over 10 years the Smiths have sold their farm products to CSA members in the Nashville area. Now, Hannah and Jesse help them grow their CSA shares in exchange for garden space and products for their own CSA.

The couple are very grateful for the opportunity to learn how to build a sustainable, financially viable homestead model from the Smiths, but even under the best of circumstances it is a learning process for everyone. “You have to be  careful to make sure that no one feels that they are getting the short end of the stick,” Jesse advised. “It just takes conversation. We’ve gotten better at just talking stuff out and making sure everything is fine. You might dread it beforehand, but you always feel better after you talk it out.”

Farming communities of years past often succeeded because neighbors helped neighbors. Co-farming can be one possible way to recapture that spirit, even on a small scale. “We feel very lucky to have known the Smiths,” said Jesse, “and have our mentors be the ones who saved us when trying to find our land. It means so much to us to have them be there for guidance, helping to start our farm and for us to share in their family.”

Despite the obstacles, immersing themselves in the off-grid lifestyle has been a great experience for Hannah and Jesse. They are expecting their first child and look forward to growing a family on their farm. Connecting to the food system is one way that they can contribute to improving the planet for themselves and for future generations. As Jesse recently wrote on their blog, “We will raise our children to understand where they came from, too, and what fuels them, in hopes that they will learn to treat the planet with the same respect they treat themselves.” 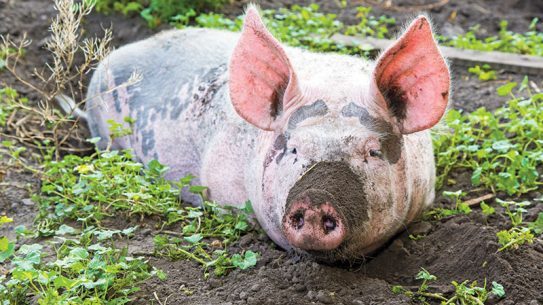 How to pasture-raise ’em to enjoy their natural tilling talents and … fine hams,...