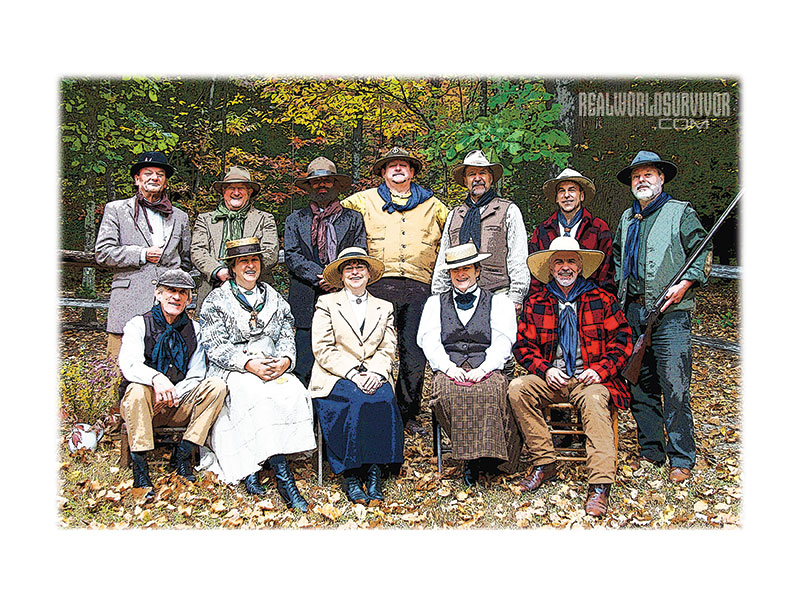 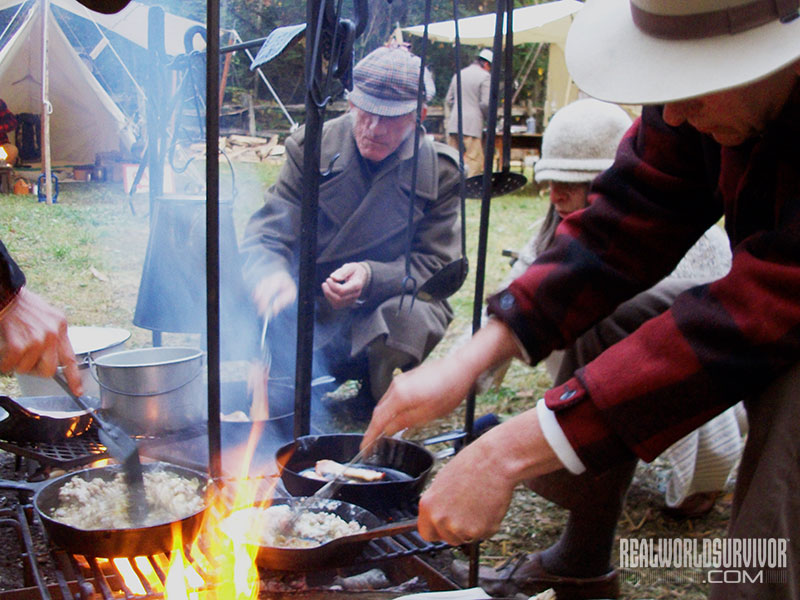 2 of 9
Photo by Steve Watts and David Wescott
The Comeback Campers
The hearth is the heart of the traditional camp. It’s about honest grub cooked over an open fire. 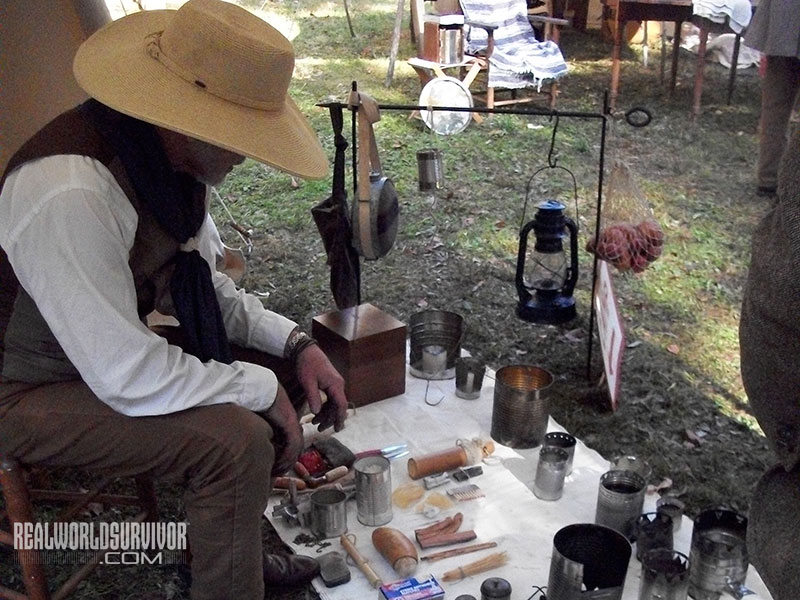 3 of 9
Photo by Steve Watts and David Wescott
The Comeback Campers
Classic Camping is the use of tools, techniques and traditions in the style of the Golden Age of Camping (1880-1930). 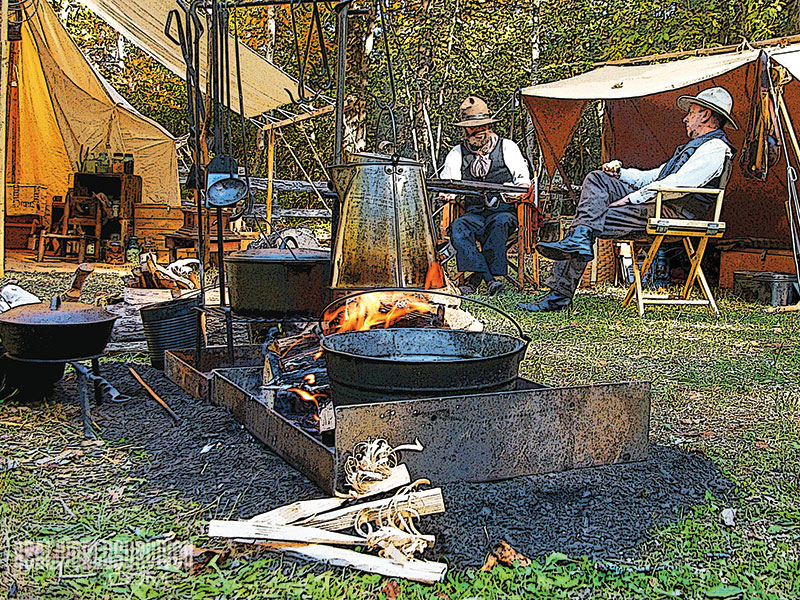 4 of 9
Photo by Steve Watts and David Wescott
The Comeback Campers
A life under canvas is about the senses…the smell of wood smoke and paraffin lamps…the feel of sharp-edged tools, snug knots and the crisp air of morning. And, let’s admit it, it’s about style…khaki riding breeches, broad-brimmed hats, soft wool shirts and well greased boots. 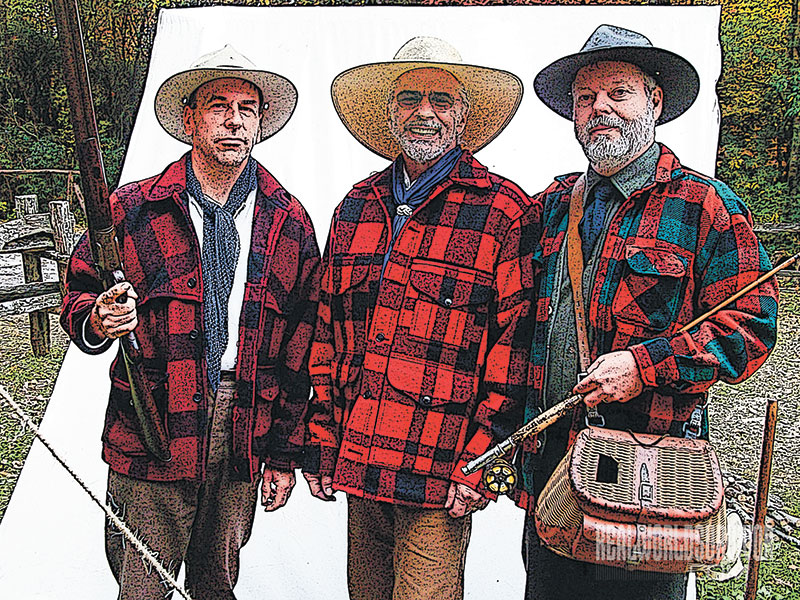 5 of 9
Photo by Steve Watts and David Wescott
The Comeback Campers
Men in classic camouflage. 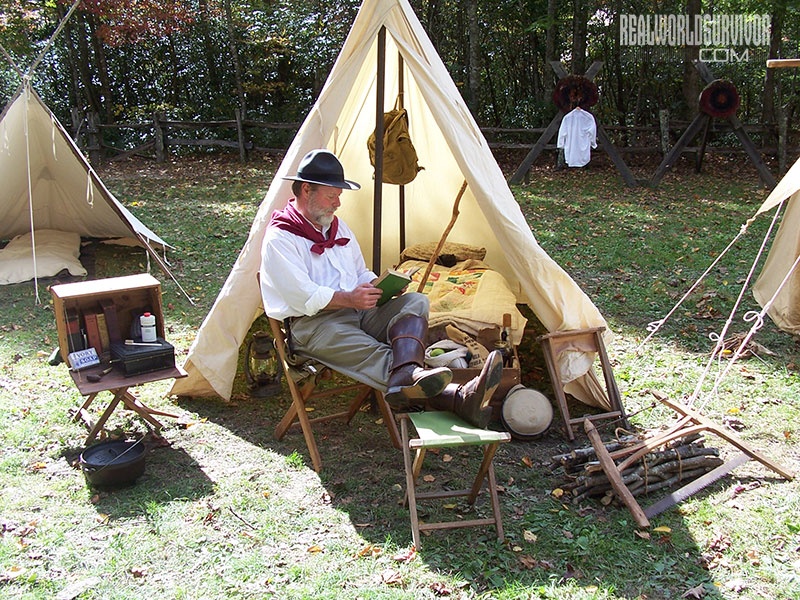 6 of 9
Photo by Steve Watts and David Wescott
The Comeback Campers
Classic Camping is: • directly connected to its historic context. • an understanding and appreciation for handmade craft. • the use of classic style, timeless utility and aesthetic efficiency. • a comfortable confessed relationship with romance and nostalgia. 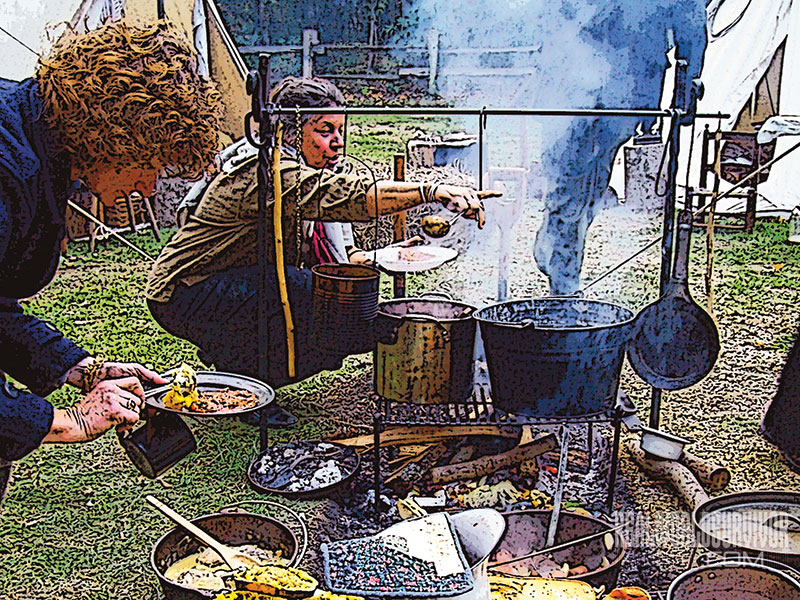 7 of 9
Photo by Steve Watts and David Wescott
The Comeback Campers
The hearth is the heart of the traditional camp. It’s about honest grub cooked over an open fire. 3 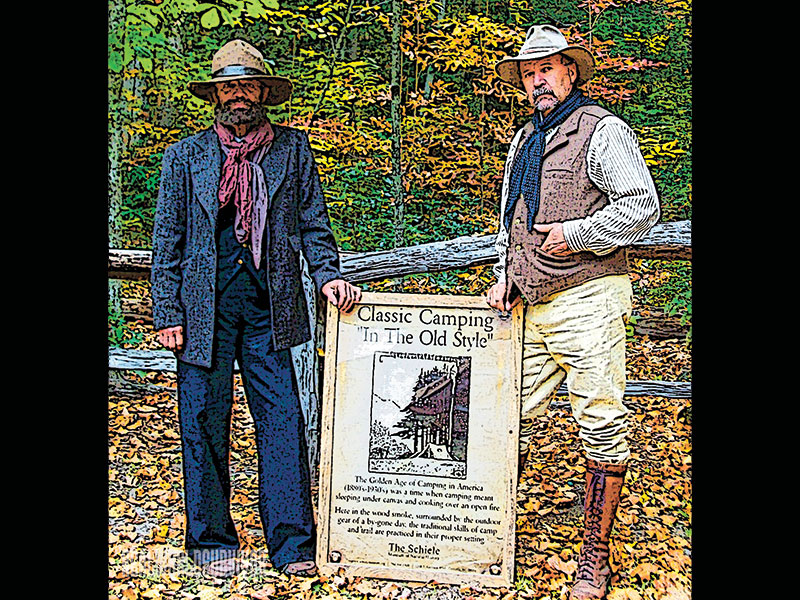 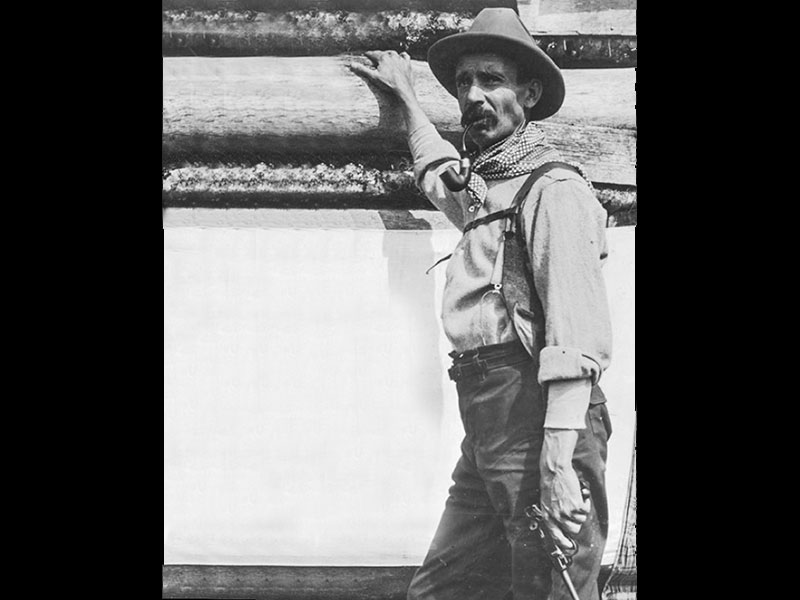 9 of 9
KEPHART QUOTABLES CIRCA 1906
“In the School Of The Woods, there is no graduation day.” “The instinct for a free life in the open is as natural and wholesome as the gratification of hunger and thirst and love. It is Nature’s recall to the simple mode of existence that she intended for us.” 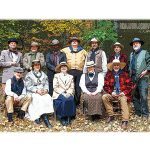 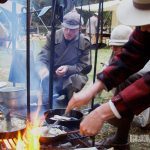 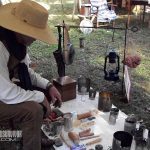 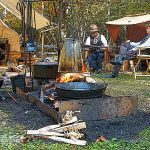 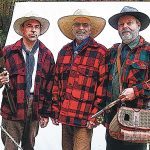 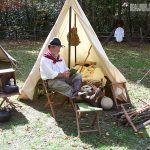 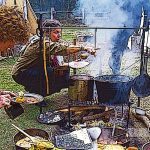 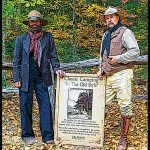 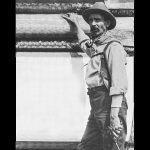 “Daniel Boone…a master of woodcraft, able to find his way hundreds of miles through unbroken forests, able to maintain himself alone not merely for a day or a week but for a year or more without other resources than his rifle, his tomahawk and his knife; and this in the face of the most wily of foes. He was muscular and strong and enduring; victor in many a hand-to-hand combat, conqueror of farms cut from the forest; performer of long journeys afoot at speeds that would seem incredible to a college athlete. He was a dead shot with the rifle, an expert hunter of game. Other men, long since forgotten, were all
these things.”—Stewart Edward White, 1922

The U.S. census of 1890 officially declared that the American frontier no longer existed. At this same time, the Golden Age of Camping in America was on the rise. As the frontier was vanishing, campers looked back with nostalgia to the skills of their not-so-distant pioneer ancestors. Their camps became their own personal journeys into their own personal frontiers. To be a master camper was to be in some sense a frontiersman, a wilderness scout, a backwoodsman, a shirt-tailed man, or a forest rover of old—self-reliant and skilled in a sylvan world that was quickly slipping away. Thus, an American camping and woodcraft style emerged with a smoky frontier flavor all its own.

This frontier connection was acknowledged by the masters of traditional camping and woodcraft. Coming out of this tradition was George Washington Sears (“Nessmuk”—Woodcraft, 1884), born in 1821 (only one year after Daniel Boone’s death.) Nessmuk traveled by foot and canoe in a style that would have been familiar to any frontier scout. His lightweight kit would not have been out of place in any backcountry settlement, fort or deep-woods hunting station: rifle, hatchet, belt knife, clasp knife, knapsack, haversack, blanket and oilcloth. Horace Kephart (The Book of Camping and Woodcraft, 1906), “The Dean of American Campers” (and considered by many to be the grand master of outdoor practitioners in his day) was himself seeking the spirit of the frontier in the Great Smoky Mountains of North Carolina. It is no accident that Dan Beard (Camplore and Woodcraft, 1920) named his pre-Boy Scout youth programs the “Sons of Daniel Boone” and the “Boy Pioneers.” Ellsworth Jaeger opens his classic volume Wildwood Wisdom (1945) with “The Woodsmen of Yesterday”—his homage to “our ancestral buckskin men” and acknowledges the direct link between skills of the frontier and the campcraft that he so tirelessly taught and promoted throughout his life.

And so, we return to the trail…to the camp…to the fire. We are not alone. We are connected to the old masters—and thanks to them—to the frontiersmen of legend. We are the inheritors of a uniquely American outdoor legacy. We walk in their shadows—as they walked in the shadows of the great trees. We drink from the well of their knowledge—as they drank from the clear mountain streams. And, ultimately we sit by the fire—together.

The love and practice of these traditions is being carried on today by a group known as the Acorn Patrol, who are dedicated to planting the seeds of the classic camping revival in America.

The idea of the Acorn Patrol grew out of Kamp Kephart—a series of traditional camping skills workshops conducted at the Schiele Museum of Natural History, Gastonia, North Carolina. These courses were inspired by the works of the classic camping authors and practitioners of old, and the publication of David Wescott’s Camping In The Old Style (2000). From this foundation, the
Kamp Kephart Field Courses were initiated and the classic camping revival in America was born.

The eight original members of the Acorn Patrol hailed from New York, North Carolina, South Carolina, Idaho and one from parts unknown. Today the home patrol numbers 16, with newer recruits from Georgia and the Carolinas, and is rapidly catching fire across the country. They continually practice, participate in workshops, conduct research by referring to literature from the masters of woodcraft, and apply their skills in demonstration camps, contributing their time and treasure to the preservation of the craft. Unlike some other living history events, life in an Acorn Patrol camp celebrates life in the outdoors through leisure and recreation. The Acorn way includes finding teachers, honoring those teachers, reading historic texts, and applying new skills in the field—you can never know too much and you can never be too skilled.

The first Acorn Patrol outing was held at the Pisgah National Forest’s Cradle of Forestry in America, a U.S. Forest Service historic site which tells the story of the Biltmore Forestry School (the first forest school established in America) and pioneering forester Carl Shenck, chief forester for George Vanderbilt’s Biltmore Estate. Imagine, Vanderbilt had so many trees that he needed to start the Forest Service. The team was initially invited to the site in 2007 by Cindy Carpenter, chief interpreter, to conduct a demonstration camp exhibiting camping in the classic style. The Acorns have gathered on this same site for their annual fall encampment ever since.

In 2010 the Acorn Patrol was invited to set up a camp as a part of the Horace Kephart Days celebration in Bryson City, North Carolina (Kephart’s adopted home). They have been involved with this unique annual gathering ever since. As Libby Kephart Hargrave (event organizer and great granddaughter of the Old Master) said, “They dress Kephart, they cook Kephart and they camp Kephart.”

Many Kephart family members and scholars from across the country attend this event, including George Ellison, author of the insightful introduction to the newest edition of Camping and Woodcraft available exclusively from the Great Smoky Mountains Association. This direct link to Horace Kephart and the Kephart family is a treasured gift shared by all Acorn Patrol members.

The Patrol has been invited to such notable events as the 75th anniversary of the Blue Ridge Parkway at Appalachian State University, and the 100th anniversary of John Muir’s camp in Idaho’s Harriman State Park. Members have also conducted research resulting in projects such as In Seton’s Tracks: Grace and Ernest Thompson Seton In Idaho, as well as Thomas Ray’s work on Kephart’s knife (see American Frontiersman #175) and his recent reproduction of the folding Kephart camp desk. A national conclave took place in the summer of 2013 at the Woodsmoke Symposium held in Idaho, where an international contingent of participants gathered to celebrate classic camping; and the 2015 Woodsmoke (July 12-18) is set to happen again in Idaho on the banks of Henry’s Fork of the Snake River, bringing this fraternity of classic campers together once again. Find out more by visiting woodsmokeusa.com.

Clothing is gear—it’s your first line of protection against the elements. When you dress in the traditional style, you learn to think and move in ways that are efficient and effortless, and put you in rhythm with life outdoors. You have to work with, rather than in spite of nature, and the outcomes are based a bit on your technology, but more importantly upon your skill, knowledge and experience. Living in clothing made from fibers that are safe near fire, and keep you warm even when damp, is far more practical than our contemporary fashion. The pioneers knew their clothing and how to dress—they survived for hundreds of years with fur, hide and natural fibers.

“But wouldn’t they use Gore-Tex if it had been available?” The answer to the question is simply that they didn’t have it so there was no choice, and they learned how to live comfortably without it, and became better outdoorsmen because of it.

“Why would modern re-enactors choose to go without it?” Because we have the choice to learn skills and techniques informed by the land and gain a richer experience because of that interaction. Not to mention the fact that in classic clothing you just look classy. The trade-off with modern over traditional gear is that when new gear is introduced, it’s usually for convenience, and when you adopt that gear, the price you pay is usually the loss of knowledge.

Backpacking killed camping. Camping is what you do when you get to camp, and hiking is only one of many ways you may choose to get there. The word “backpacking” didn’t even arrive in the outdoor literature until the 1940s. Historically, it was known as woodsrunning, and in later years man packing, hiking or more popularly tramping; and gear was manufactured, modified or homemade to accommodate concerns for weight and bulk. Now that backpacking is the model for how we camp, gear is thought of in that context and is engineered backwards to fit the model, hence we get gear that is totally inefficient and undependable in the “camping” market because it was designed from a backpacking paradigm. Weight is only one small factor when considering the camp outfit.

When you think of camp from a classic camper’s perspective, a whole new world of possibilities is rediscovered. Campers got to camp in cars and wagons, or on trains or horses, or were self-propelled in canoes or on skis, all of which make weight a secondary concern. The sturdiness and dependability of canvas tents with wooden poles, cast iron and steel cooking gear, the beauty of brass and leather fixtures and the warm glow of oil lamps in the evening—now that’s camping. No more crawling into nylon cocoons to spend the evening; sit upright in a chair and read a book or loaf with friends and bask in the woodsmoke for a while. Camping was meant to be pleasurable, so get comfortable and re-create yourself. 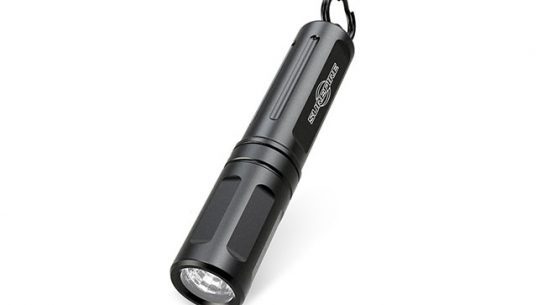