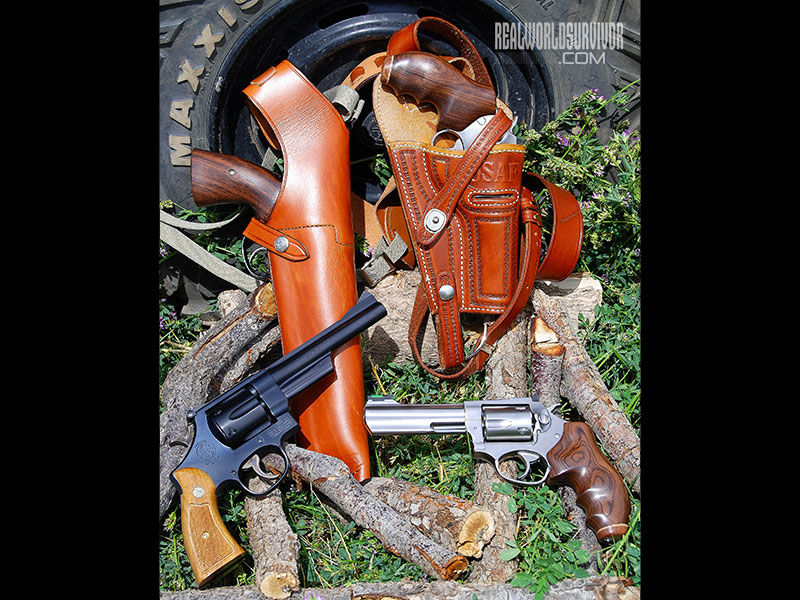 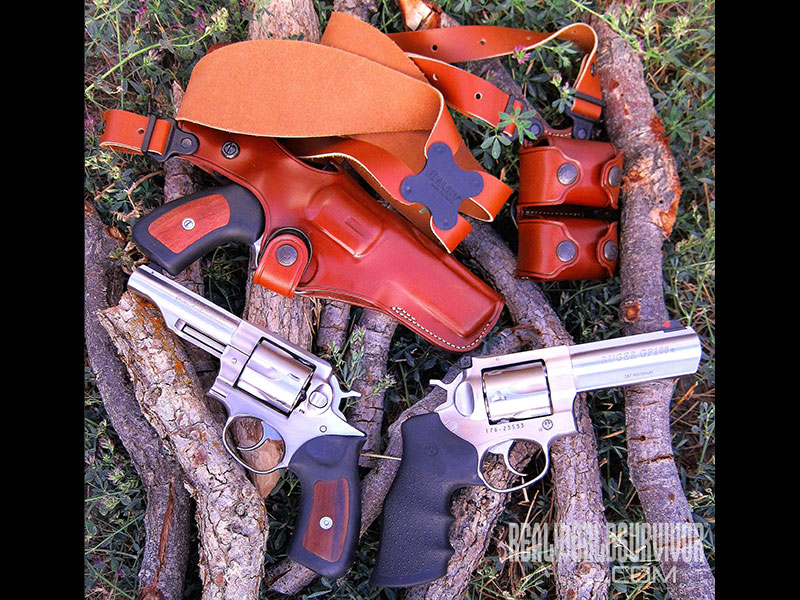 2 of 8
Photo by Denis Prisbrey
Off-side Speedloaders
Adjustable sights are more versatile with different loads, but either of these Ruger GP100s in the Galco VHS Shoulder System with off-side speedloader pouches can get you there and back. 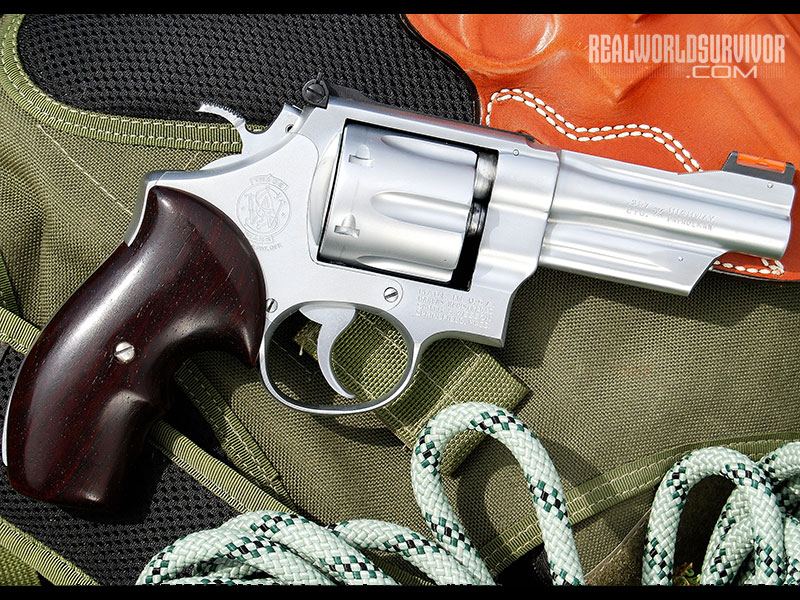 3 of 8
Photo by Denis Prisbrey
Backwoods Companion
The .357 is a natural for backwoods use, and a smaller-framed revolver is a handy travel companion on ATV four-wheeler expeditions 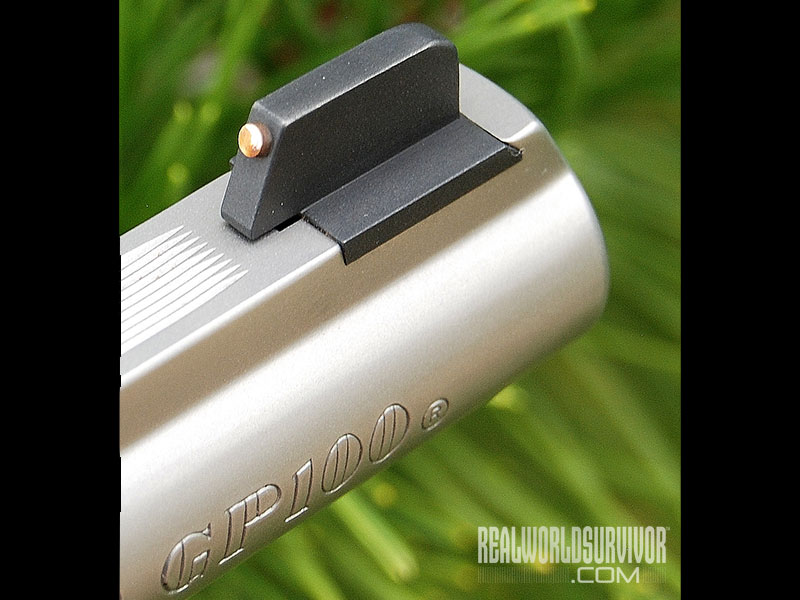 4 of 8
Photo by Denis Prisbrey
Sights and Fiber Optics
Basic black doesn’t do it for everybody. If you need more sight visibility, explore options like fiber optics and gold beads. 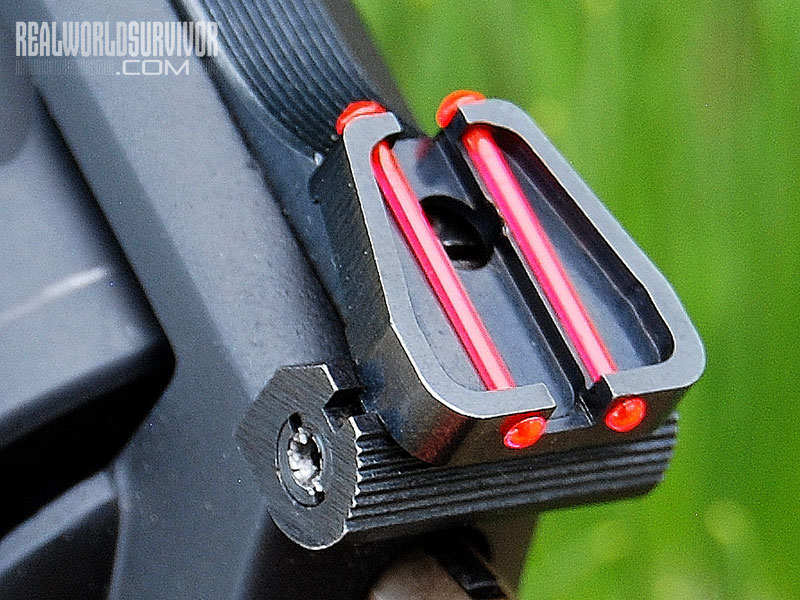 5 of 8
Photo by Denis Prisbrey
Sights and Fiber Optics
Basic black doesn’t do it for everybody. If you need more sight visibility, explore options like fiber optics and gold beads. 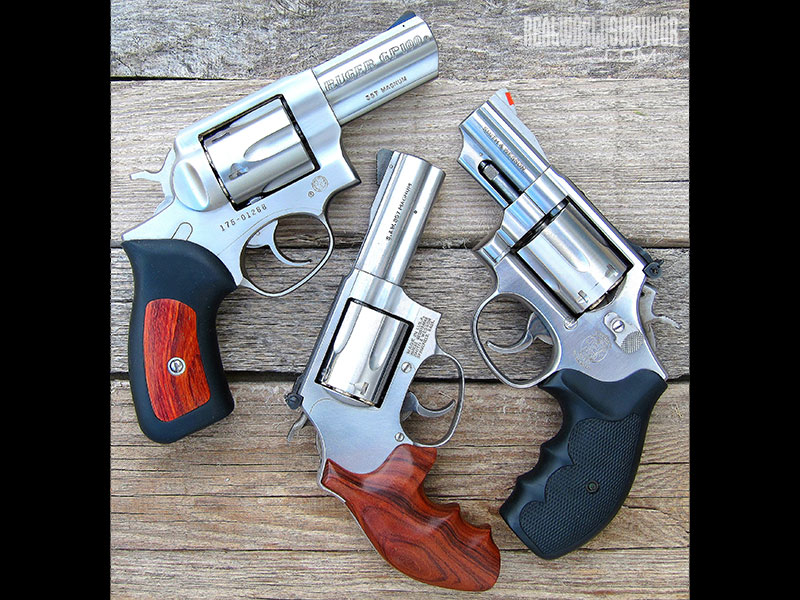 6 of 8
Photo by Denis Prisbrey
Barrel Lengths on Magnums
Barrel lengths are determined by projected use. The 3-inch Ruger at left, the 3-inch S&W Model 60-10 at center and 2.5-inch S&W Model 66-4 at right are excellent choices for concealed carry or hiking use. 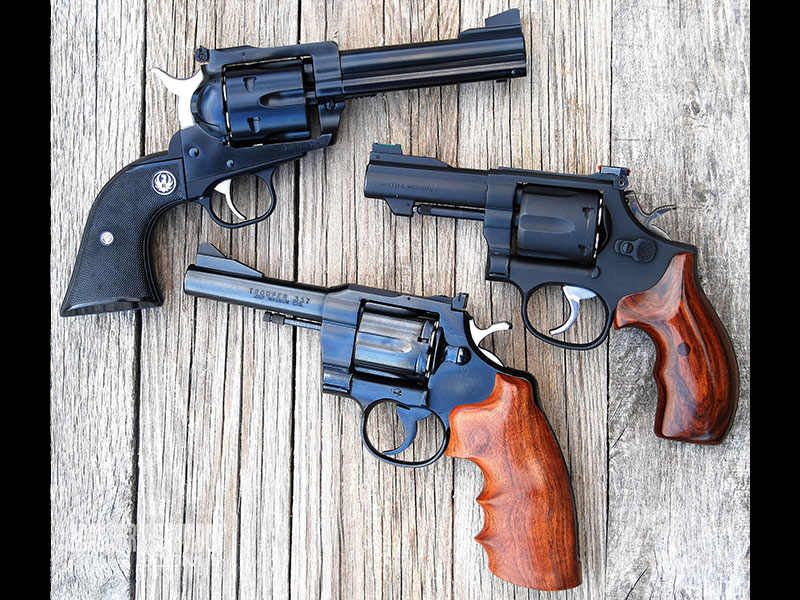 7 of 8
Photo by Denis Prisbrey
Custom Wheelguns
From full customs like the 1980s 3.25- inch-barelled S&W Model 586, to a 1960s Colt Trooper .357 with hand-filled Hogue grips added or a brand-new, totally stock Ruger 4.63-inch-barreled Blackhawk, there’s a .357 Magnum out there to fit everybody who wants one. 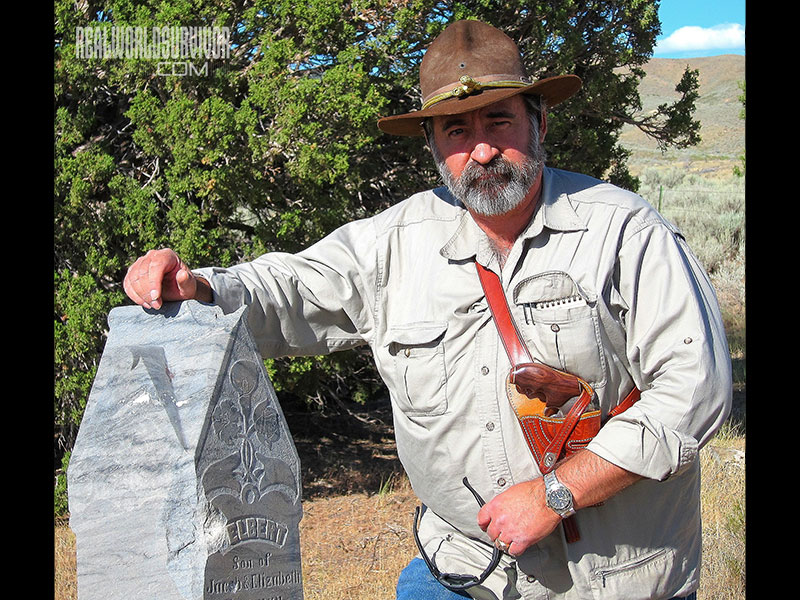 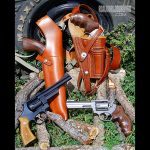 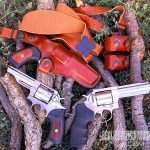 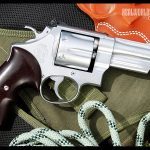 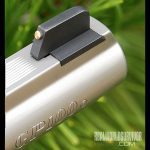 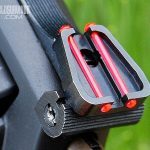 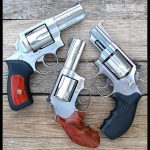 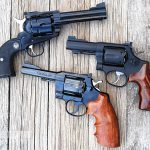 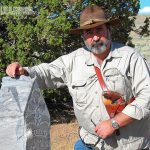 America’s first magnum handgun caliber, the .357, was considered hot stuff when it was first developed in 1934.

But as the market began to shift heavily toward self-defense handgunnery in the late 1980s, and with the proliferation of full-capacity autopistols and the later development of high-octane hand cannons of the .500 S&W Magnum type, the magnum that started it all was slowly edged into the shadows.

Once considered perfectly proper for anything from jackrabbits to grizzlies in the wilds, and from engine blocks to muggers on the mean city streets, the .357 has taken a back seat to either greater-capacity autos or higher, big-bore horsepower among those looking for “civilized” self-defense in town or a trophy Kodiak in the woods. This is unfortunate since the exponential progression of modern ammunition for the .357 Magnum since 1934 has made a good .357 revolver in the right hands every bit as capable of getting the job done as a heavier magnum caliber, and with markedly less fuss and bother.

The .357 is much more manageable than its big-bore magnum successors, and while it doesn’t have quite the same sales figures as it once did, it still has a solid following and a wide variety of configurations to choose from.

If you’re in the market, the first step in making the right selection is to define what you want your .357 to do for you. Around town as a regular concealed-carry item, you’ll probably want to stay relatively small in overall dimensions to avoid alarming the natives.

Smith & Wesson (S&W), Ruger, Taurus, and Charter Arms offer small- to medium-framed, five- and six-shot .357 Magnum revolvers with barrels in the 2- to 2.5-inch vicinity that carry well. If you’re of a personal size and bulk sufficient to pull off a bigger gun, S&W, Ruger and Taurus produce 3- and 4-inch double-action (DA) .357 Magnums in capacities from 5 to 7 rounds and in small to larger frame sizes.

For open carry where the natives may be sparse, or local customs don’t immediately dictate a police response at the sight, S&W and Ruger currently offer a good range of revolvers with full-sized features and longer barrels. For the hunt, Ruger still has several variations on their long-running Blackhawk theme in the .357 Magnum caliber for those intrepid handgunners who like a little more challenge than the average rifle hunter, and Colt still sells its venerable Peacemaker in the caliber to those willing to wait long enough for delivery.

Traditional fair-weather blue and foul-weather stainless are both standard offerings, and if those don’t render enough visual appeal there’s always an aftermarket coating in either a quality plating like durable hard chrome or a bake-on in almost any color variation of the rainbow that can be applied later on if you’re willing to send your gun out for it. Coastal dwellers, swamprats, rainforest denizens, fishermen and women often find a stainless revolver a better way to go. Blue covers the situation nicely for the rest of us and eventually wears itself into a comfortable greyish patina that says, “Been there, done that, don’t care if I ain’t pretty anymore.”

Unless you’re dressing to impress, your .357 doesn’t have to be new and shiny. Every day there are hundreds of used .357s listed on internet sites like Gunbroker.com and Gunsamerica.com that range from run-hard/put-away-wet to well-used-but-serviceable to rarely-fired and even totally-unused/new-in-box. Older Smiths, Rugers, and Colts are often good buys and excellent shooters, and prices can be surprisingly reasonable. It never hurts to check under glass in the used-handgun section at a couple of your favorite neighborhood gun shops. Pawn shops are also productive sources for used revolvers, but you have to watch pricing, as some tend to value their take-ins a little on the high side.

The DA revolver is one of the simplest and easiest to operate in just pulling the trigger until it stops making loud noises. The DA also offers rapid-fire capability (important in feral dog or feral hog country) and quick reloading (for more “civilized”

environments), along with the ability to cock the hammer on each shot for better long-range accuracy.

A single-action (SA) Ruger is more durable than a single-action Colt, but the Colt has 140 years of tradition behind it (which is enough to tip the scales right there for some shooters). Both will propel the same bullet at the same speed with standard commercial loads in the same barrel lengths, and accuracy can be comparable. The Ruger will be much more affordable, the Colt will be…a Colt. And there are the various Italian-made Peacemaker copies, if you can find one chambered for the .357. There are some who do carry a SA for concealed-carry self-defense today, which can leave you at a disadvantage if you should need to reload. I personally think the thumbbuster is better reserved for use as a woods gun for either hunting or tooth-and-claw repellent purposes.

There are so many different aftermarket grip makers that if you can’t find something in wood, rubber, buffalo horn, stag, plastic, pewter, mother-of-pearl, or ivory to fit your own digital appendage, you’re just not trying. While the .357 Magnum is not as much of a fire-breathing buck snorter as the bigger magnums that start with a 4, a good fit between gun and hand does reduce discomfort and increases efficiency.

During more than a few years of carrying numerous revolvers for a living and for recreation, I can truthfully say that I’ve rarely met a factory grip I really liked. Most just don’t fit my hand well. Don’t be afraid to explore options, and above all, don’t feel obligated to accept a grip that’s uncomfortable in your hand just because that’s what came on the gun. Do some internet research if you have access, hit a well-stocked gun shop if you can and don’t stop until your gun fits you.

Wood is traditional, usually anchors well in the hand in dry conditions, and wears well. Rubber can be a better non-slip choice if the gun will be handled wet (rain, blood, etc.) and offers some cushioning under recoil if that’s important to you. Horn can shrink over time and can get slick in the hand if not checkered. Plastic/polymer is normally impervious to liquids and shrinkage. Pewter looks downright avant garde (if you like that sort of thing) but gets very cold to touch in frigid weather. Ivory is the classic expression of pride of ownership, while pearl is prone to breakage and snide comments from men when carried by men. (Ladies, you can probably pull it off.)

Sighting is another area that has to match your own needs. In general, fixed sights (with a groove on top and a blade up front) are the most durable and least susceptible to being knocked out of alignment during a rough life, but they are also the least adaptable to different bullet weights and velocities. If you plan to be switching back and forth from a lighter “town” load to a heavier “country” load, adjustable sights to match up where the bullet hits to where the gun points are worth the money, and that includes aftermarket sights, too.

Like the grips, if the sights that come on the gun don’t give you a clear sight picture, look for a combination that does. White-outline rear blades coupled with a colored front blade insert (or a gold bead, or a tritium glow-in-the-dark insert) add contrast and get your eyes on target quicker. A wider-than-factory rear notch or a different style front blade may work better with your eyes. Conversely, if you’ll be sticking to one load in your .357 and you can mate it well to a fixed sight setup that works for you, you may save a few dollars in buying a more basic gun without adjustables.

Lighter bullets typically run faster and may be more effective on deer or smaller critters, particularly with a good expanding hollow-point load. Heavier jacketed soft points or hard-cast, lead, flat-nosed types run slower but produce deeper penetration for larger animals like bear and elk if used for defense or hunting.

A longer barrel will produce more velocity than a short one (delivering more energy on target), which can be useful when shooting at longer hunting distances. But obviously a shorter barrel is easier to conceal and lighter to carry all day long.

What types of holsters are available for the .357 Magnum? More than you can possibly keep track of. Standard holster materials include leather, Kydex and nylon, all of which can be built for ankle, belt, pocket or shoulder carry. Don’t cheap-out here—spend the money and get a quality rig for your magnum investment.

Evaluate your needs in a town or country magnum revolver and I think you’ll find the right .357 Mag can handle 80 percent of them, from mild to wild, with the added bonus of being able to use .38 Special ammunition if somebody in the family prefers a shade less noise and recoil. 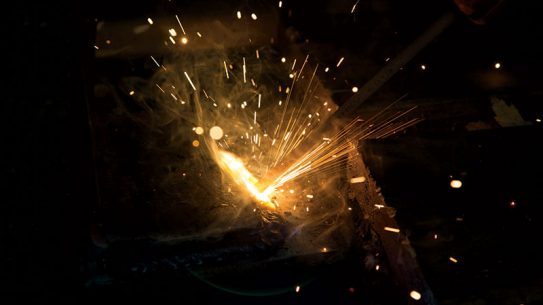