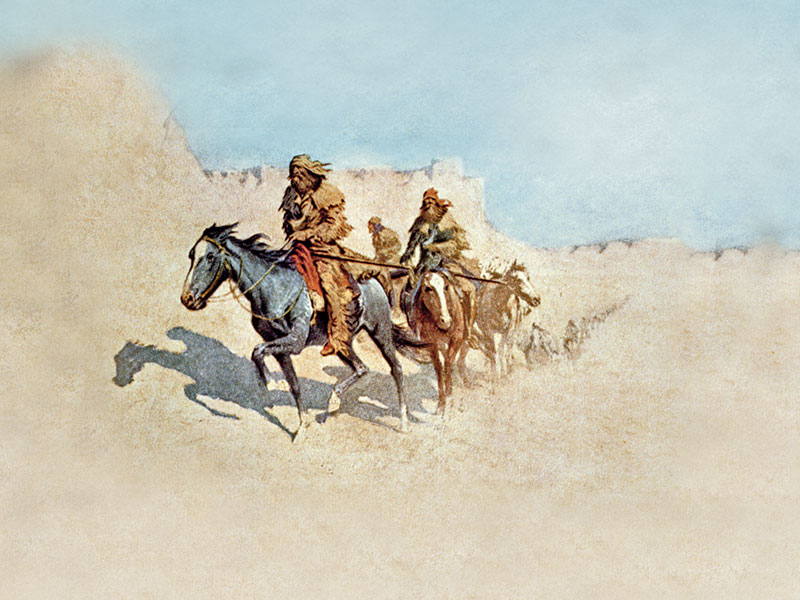 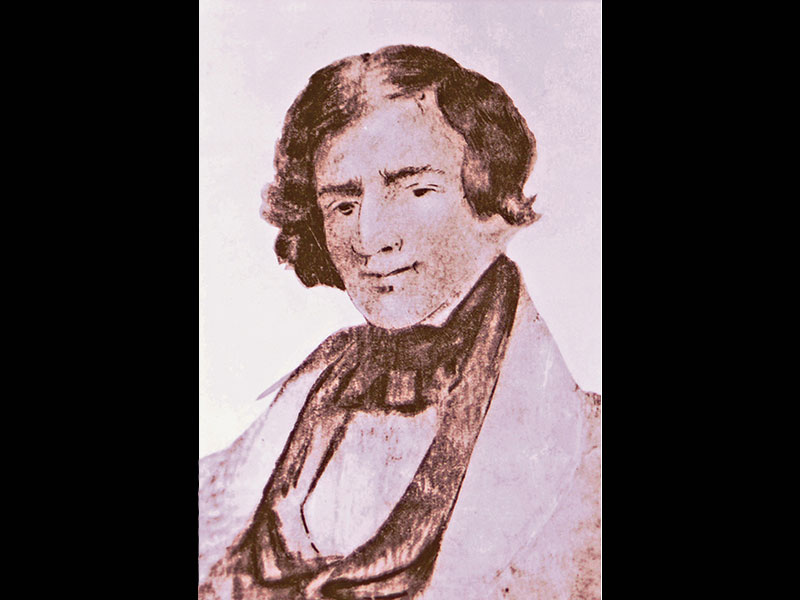 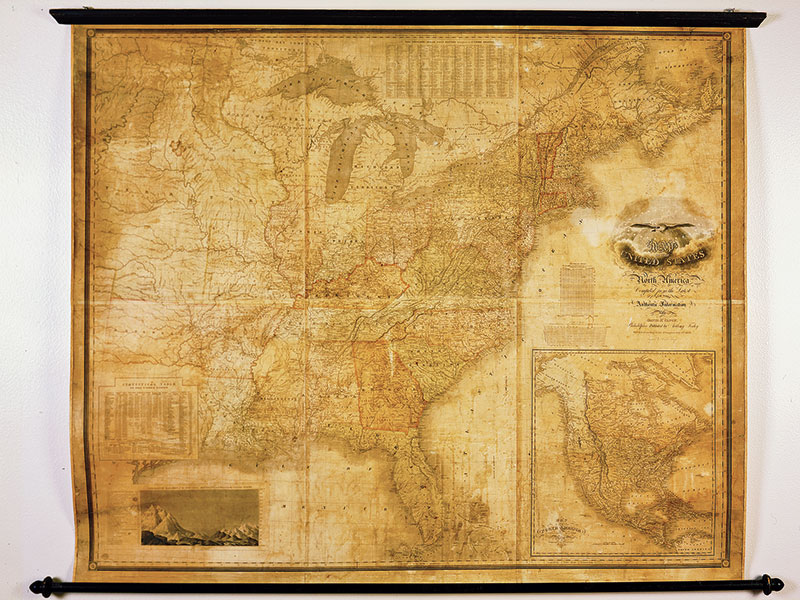 3 of 8
Photo by Buffalo Bill Center of the West, Cody, Wyoming, USA; Gift of Mr. and Mrs. Wallace S. Walsh, June 1983, 1.69.2052.
Smith’s Maps
Jedediah Strong Smith’s original maps did not survive to present, but his travels greatly influenced contemporary western maps. This map, from 1827, reflects the extent to which the eastern United States had been charted in Smith’s time, but also highlights the lack of detail on the western half of the country. 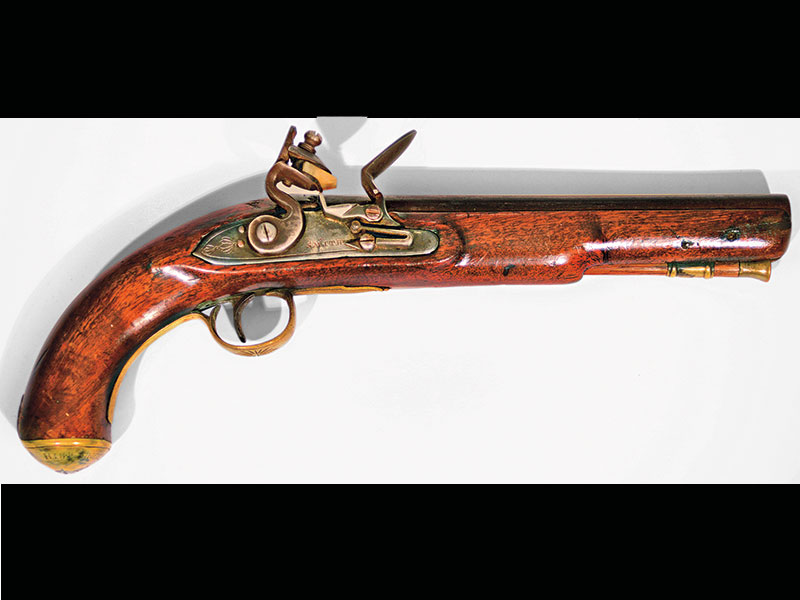 4 of 8
Photo by Buffalo Bill Center of the West, Cody, Wyoming, USA; On loan to the museum by Bob Kingsbury and Steve McKnight, L.242.2010.1
English Trade Pistol
This English Trade pistol was owned by Jedediah Strong Smith. It was originally a percussion model but was converted to flintlock. 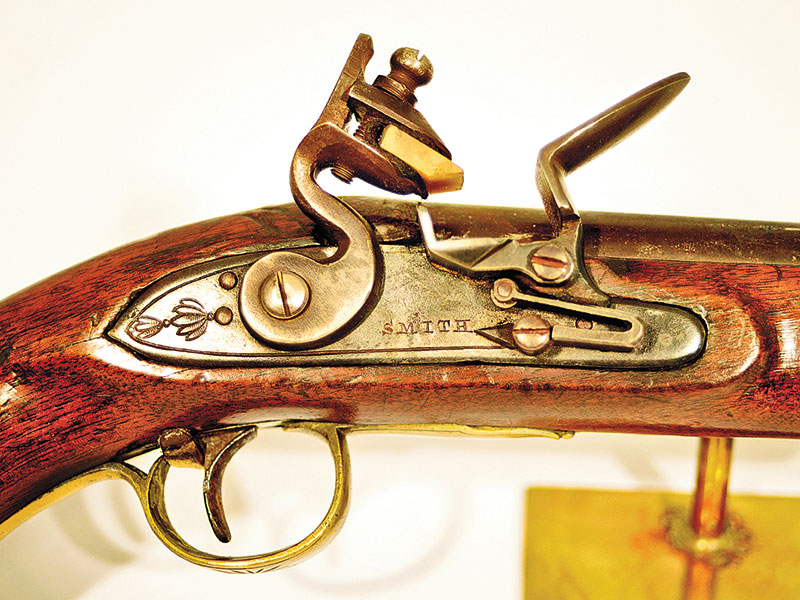 5 of 8
Photo by Buffalo Bill Center of the West, Cody, Wyoming, USA; On loan to the museum by Bob Kingsbury and Steve McKnight, L.242.2010.1
Flintlock or Percussion
This trade pistol is seemingly a flintlock. Through closer analysis of the internal parts, however, the firearm was authenticated as initially percussion. 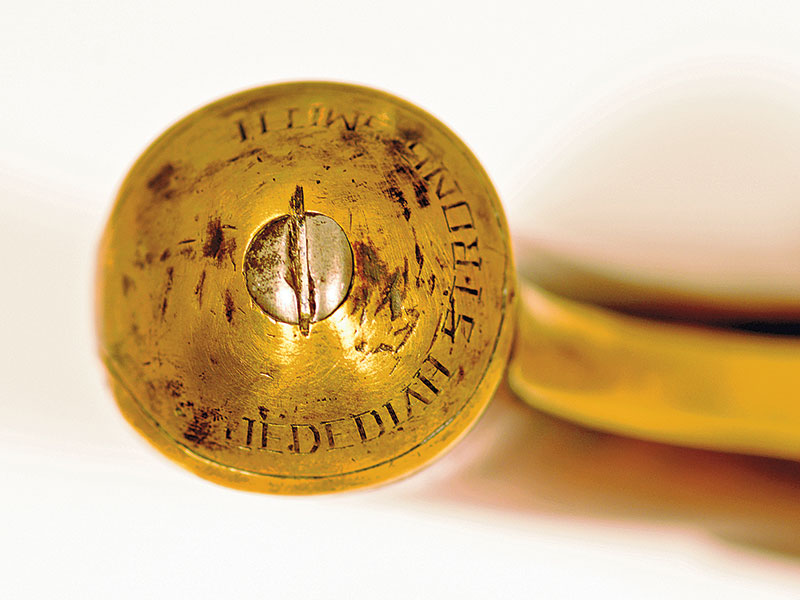 6 of 8
Photo by Buffalo Bill Center of the West, Cody, Wyoming, USA; On loan to the museum by Bob Kingsbury and Steve McKnight, L.242.2010.1
The Buttcap
This brass buttcap reads, “Jedediah Strong Smith.” 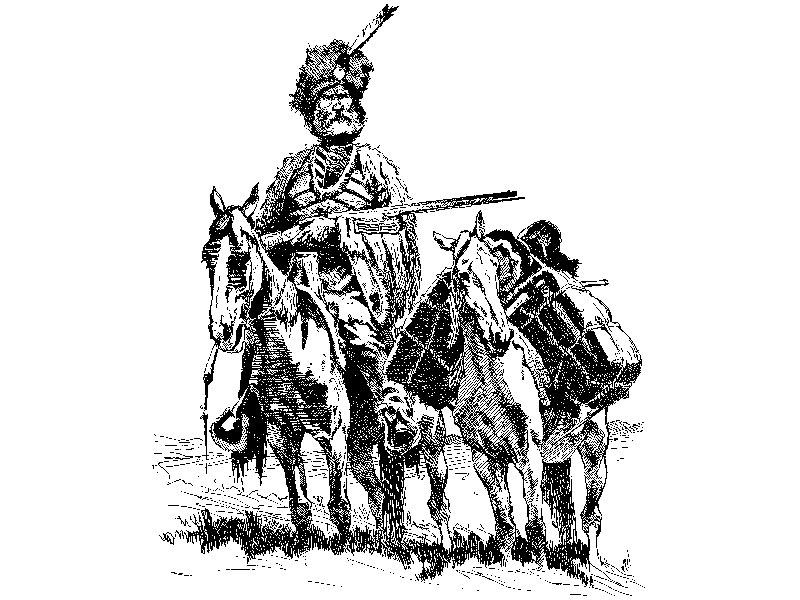 7 of 8
The Ultimate Mountain Man
Jedediah Strong Smith was a distinctive frontiersman. Despite his short life, he ventured farther than any mountain man of his time… 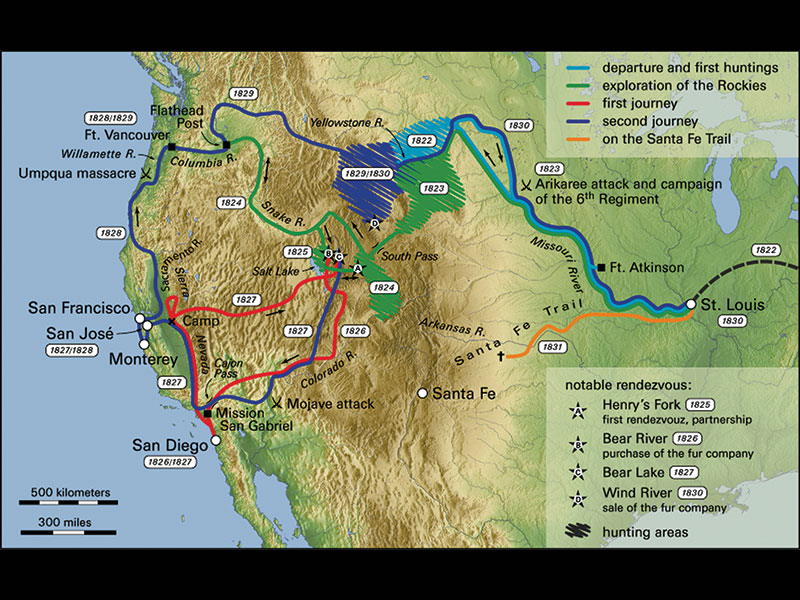 8 of 8
Photo by WikiCommons
Going West
The exploration of the West by Jedediah Smith. This map is an illustration of several routes that Smith traversed and documented in his journals. 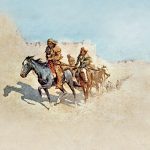 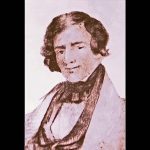 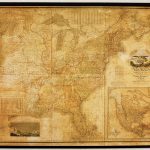 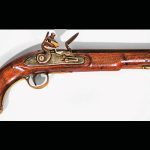 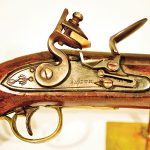 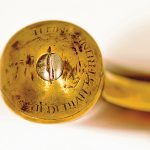 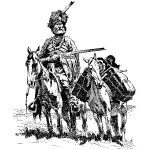 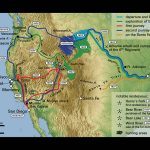 “Lost satellite reception.” The dreaded words no motorist wants to hear. We often curse our global positioning systems (GPS) when they temporarily force us to acknowledge our surroundings. But we don’t readily consider those adventurers who journeyed through uncharted territories to provide the maps we now take for granted.

Long before GPS, the American West was an untamed frontier. Prior to the 19th century, men and women who migrated west followed natural navigational markers, quite often stumbling upon their destinations. In the early 19th century, the U.S. government sponsored expeditions to research this landscape, but it took one man, operating within private enterprise, to successfully chart more territory than any white man before him. His name was Jedediah Strong Smith. His life is the story of a frontiersman—one whose accomplishments and character can only be fully understood through the context of adversity.

Jedediah Strong Smith was not a stereotypical mountain man. Although he was a trapper, fur trader, explorer and cartographer, he lacked certain personality traits often characteristic of frontiersmen; Smith was deeply religious, refraining from drinking, smoking and cursing.

He was born to a devout Methodist family in Bainbridge, New York. In 1810, the family relocated to Erie County, Pennsylvania, where Smith met his mentor, Dr. Titus Simons. Simons would instill Smith with a lifelong passion for nature and exploration.

Due to familial financial struggles, Smith traveled to St. Louis, Missouri, in 1822 in pursuit of work. He answered an advertisement for employment placed by William Ashley and Andrew Henry, co-owners of the American Fur Company. Smith accompanied them west, where he learned to trap and hunt. He quickly earned the respect of Ashley after fending off an attack by Native Americans near Missouri. His bravery earned him a promotion.

Smith swiftly rose through the ranks, and in 1825, when Andrew Henry decided to retire, Smith purchased his share of the American Fur Company. Smith would continue to lead expeditions throughout the Rocky Mountains, the West Coast and the Southwest until his untimely passing in 1831.

Smith traversed more territory than any white man of his time. He is best known for discovering a shortcut from St. Louis to the Rocky Mountains. He was the first American to enter California and travel north, discovering an overland route to Oregon. He was also the first white man to cross the future states of Nevada and Utah. His travels were essential to the development of contemporary maps of the western United States.

Listing these accomplishments, however, almost trivializes the hardships he endured along the way. Throughout many expeditions, Smith overcame obstacles that pushed his abilities, tested his perseverance and earned him the respect of many.

In 1824, Ashley assigned Smith to lead a party through the Rocky Mountains south of the Yellowstone River, in search of a shortcut to Utah. While separated from his group, Smith was attacked by a grizzly bear that overpowered the 6-foot-tall mountain man, tearing into his side. Additionally, the bear’s claws almost completely ripped off Smith’s scalp and ear. When the party found him, they reluctantly sewed on his scalp and ear with needle and thread, bound his ribs and cleaned his wounds.

As soon as he could travel, Smith and his party continued on the expedition, where they met a band of Crow who would guide them to the South Pass, the shortcut they originally set out to find. The party passed through the Upper Wind River Valley and ultimately through the pass into the current state of Utah.

Smith made two trips to California between 1826 and 1828. During that time, California was under control of the Mexican government. Smith and his party ventured into the territory as private entrepreneurs. Although they went without authorization from the U.S., that did not deter the Mexican government from perceiving the party, particularly Smith, as a threat.

In August 1826, Smith led an expedition that headed south through Utah to the Colorado River in search of new beaver hunting sites. Shortly after departing, Smith and his men found the arid climate difficult to traverse, so they decided to journey to California, where they would restock supplies. Along the way, they encountered Native Americans who guided them toward the San Gabriel Mission in California, following the Mojave River into the San Bernardino Mountains.

Smith and his men arrived in California on November 27, 1826, to a warm welcome. The San Gabriel president advised Smith to speak with the California governor, who was not as enthusiastic about their arrival. The governor subsequently arrested Smith on suspicion of espionage.

Smith’s party would remain at the mission until their leader’s release from jail a month later. As a condition of his release, the party was to return to U.S. territory following the same path by which they entered.

Smith disregarded this request, and took his men 350 miles north to the San Joaquin Valley in search of an overland route to Oregon. They attempted to pass through the Sierra Nevada mountain range, but could not find a path due to heavy snowfall. Smith made an executive decision to save his men by leaving them, with the promise to return with reinforcements later that year.

In 1827, Smith kept his word. He set off with 18 men and two women to recover his party. Along the trail, hostile Native Americans attacked Smith and his new team, leaving 10 men dead and the two women taken. He continued with the survivors to the San Gabriel Mission, where he was arrested again, this time along with his men. Despite having violated their agreement, the governor ultimately released them, and they were able to rescue the party that Smith had left behind the previous year.

The aforementioned expeditions are only a few representations of the hardships that Smith encountered in his travels, hardships that forced him into an early retirement. In 1830, he sold his fur-trading company and moved back to St. Louis.

In Missouri, Smith began making a map of his western travels, but noticed a region he had neglected: the Southwest. In order to complete his map, he needed more detailed information of the region. So, on April 10, 1831, Smith came out of retirement and journeyed to the Santa Fe Trail.

In May, near southwestern Kansas, Smith left his group to search for water and never returned. His party proceeded to Santa Fe without him, hoping he would meet them there. Upon arrival, they discovered a Mexican merchant selling several of Smith’s personal effects. When questioned, the merchant said he received the items from a band of Comanche hunters who had taken them from a white man they killed near the Cimarron River.

Smith’s body was never found. The exact events surrounding his death vary. According to his biography, Smith came across 15 to 20 Comanches, who shot him in the shoulder. In retaliation, he killed their chief, causing the group to descend upon him.

Not many of Smith’s belongings have survived to the present. The original copies of his maps no longer exist, even though their impact still persists. The transcription from his journal remains in circulation and sheds light on Smith’s travels and experiences. He wrote often about several rifles and pistols, many of which were recovered in Santa Fe. One of his pistols is on display at the Cody Firearms Museum in Wyoming.

The firearm is a .62-caliber English Trade pistol. It came to the museum as a percussion gun that had been converted to flintlock for reasons unknown. This pistol is marked “London,” indicating it was made and proofed in Birmingham and stamped in London, but two tobacco leaves engraved on the iron tang, as well as the brass triggerguard, ramrod thimble and buttcap, indicate this gun was meant for a North American market. The brass buttcap is engraved “JEDEDIAH STRONG SMITH.”

While this pistol is one of the few surviving items belonging to Smith, he is remembered significantly through commemoration. In northwestern California, the Jedediah Smith Redwoods State Park and the Smith River are named after him. And memorial trails run between Folsom and Sacramento, California. Most of the western slope of the Wyoming Grand Tetons is known as the Jedediah Smith Wilderness. And numerous roads and rivers are named after him in Colorado, Wyoming, Utah and New Mexico.

Jedediah Strong Smith was a distinctive frontiersman. Despite his short life, he ventured farther than any mountain man of his time and is partially responsible for the maps used today. So the next time your GPS is “recalculating,” examine the surrounding environment and think back to Smith and others like him, because without them, you quite literally would be lost.

Note: Many photos for this article were reprinted with the permission of the Buffalo Bill Center of the West in Cody, Wyoming. 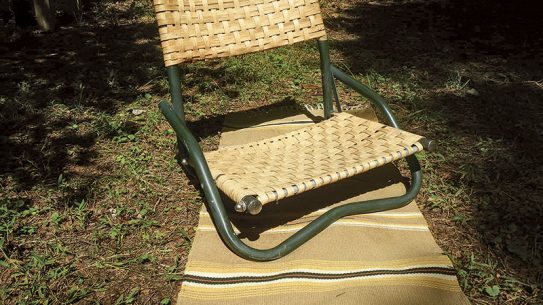 For canoeing, camping or sitting for hours in a hunting blind, this budget- and...