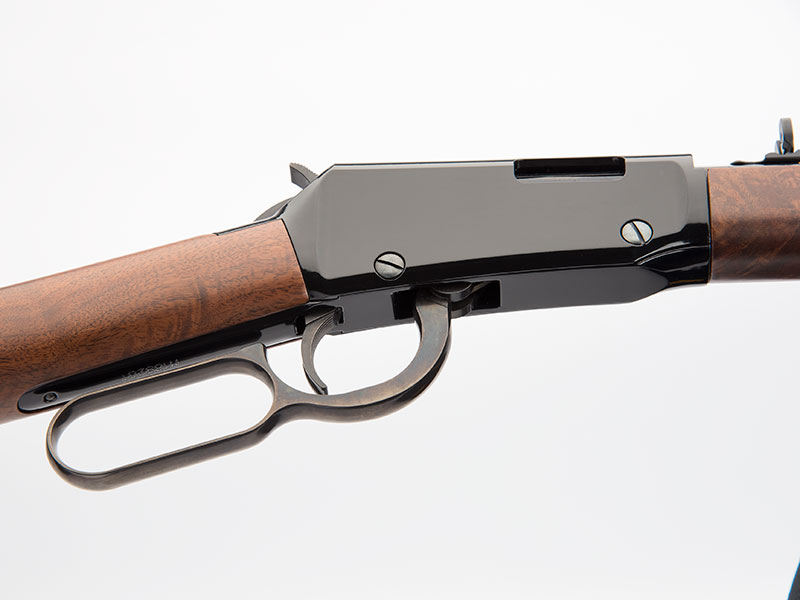 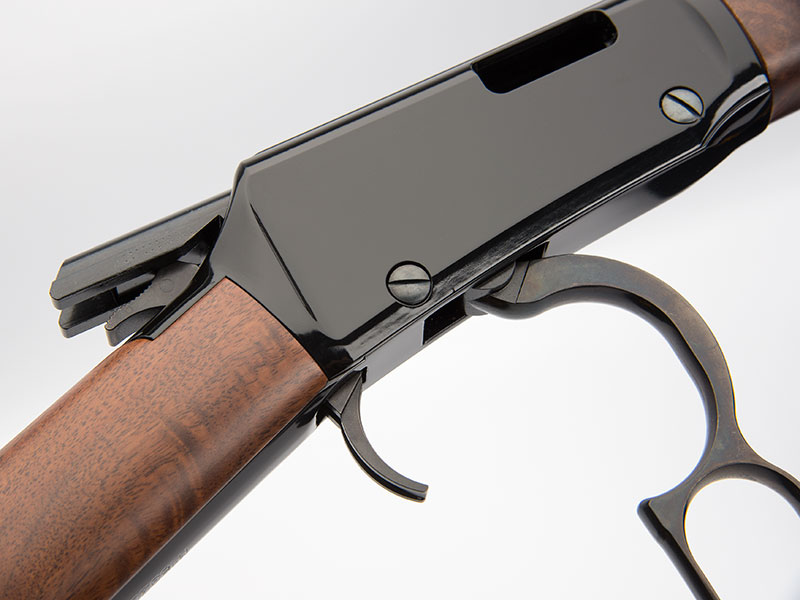 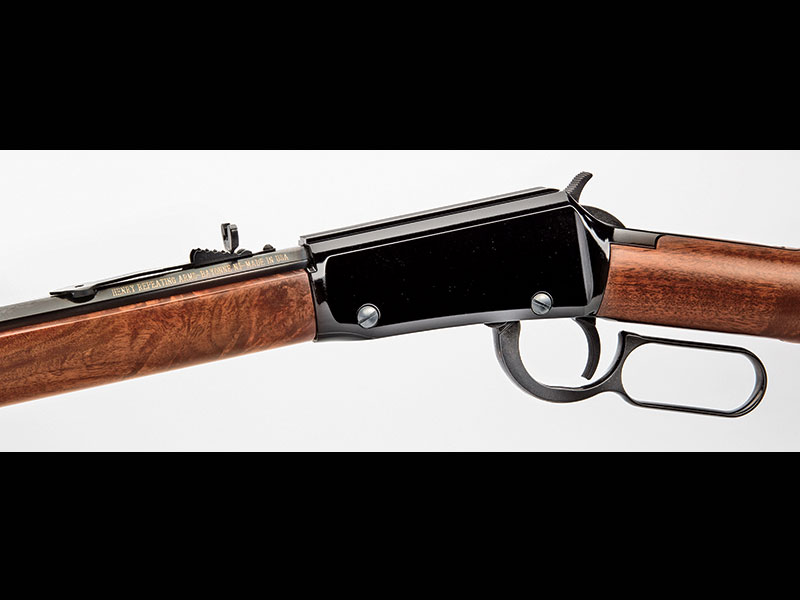 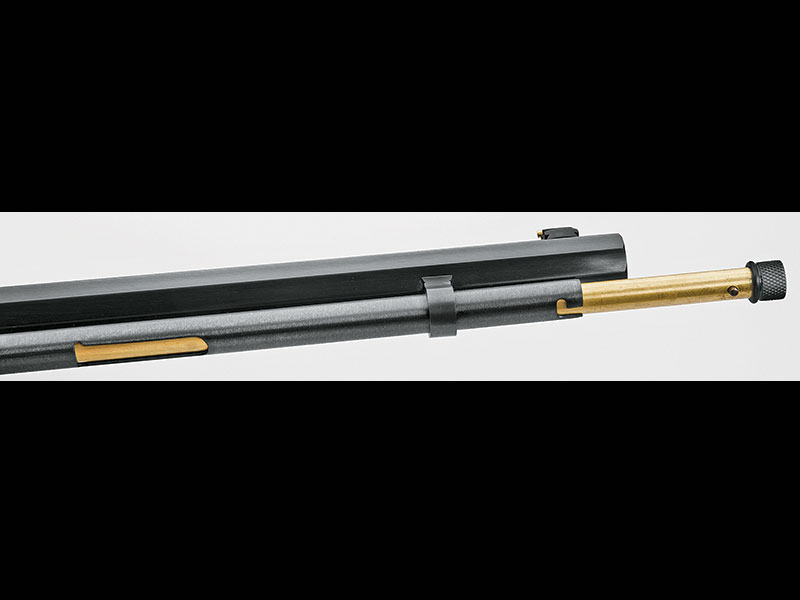 4 of 11
Photo by Bill Buckley
Conventional Tube Magazine
Conventional tube magazine carries good capacity without getting in the way for balance-point carry. 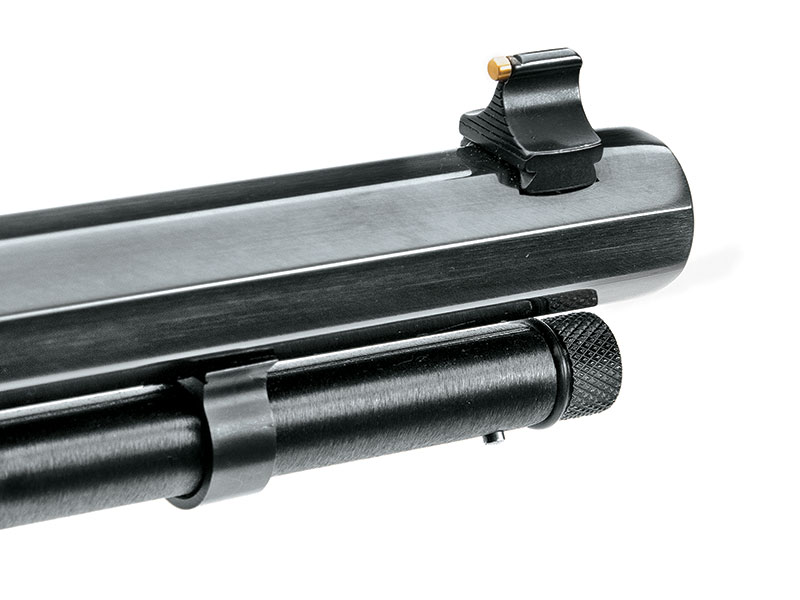 5 of 11
Photo by Bill Buckley
Sights
Fully adjustable sights are tall and visible in the field. 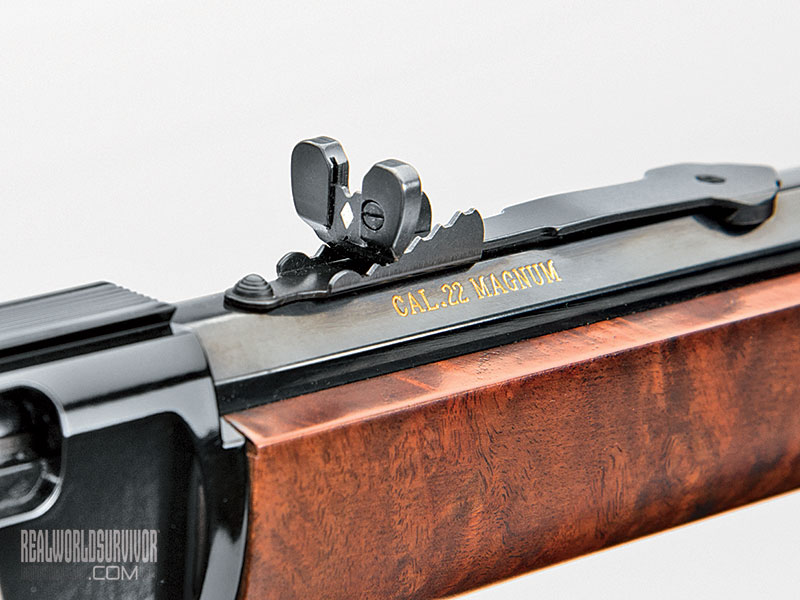 6 of 11
Photo by Bill Buckley
Visibility
Fully adjustable sights are tall and visible in the field. 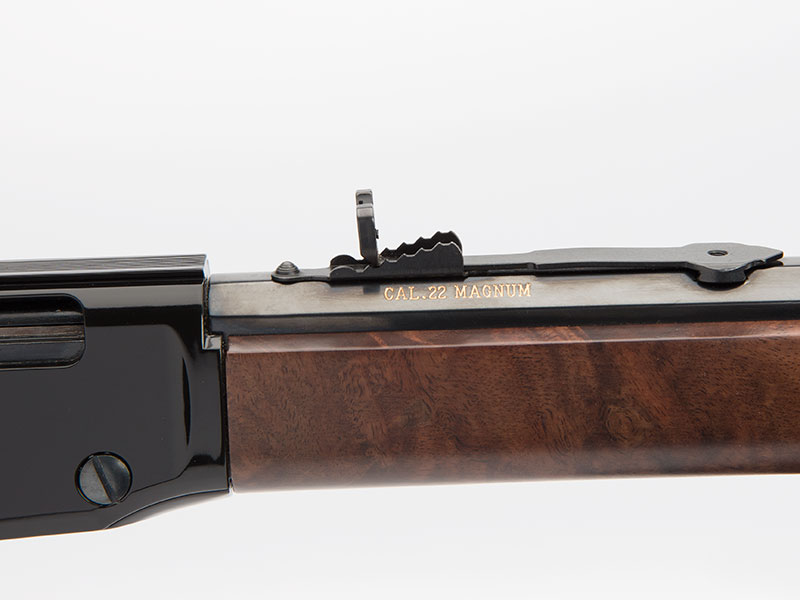 7 of 11
Photo by Bill Buckley
Rear Sight Profile
Fully adjustable sights are tall and visible in the field. 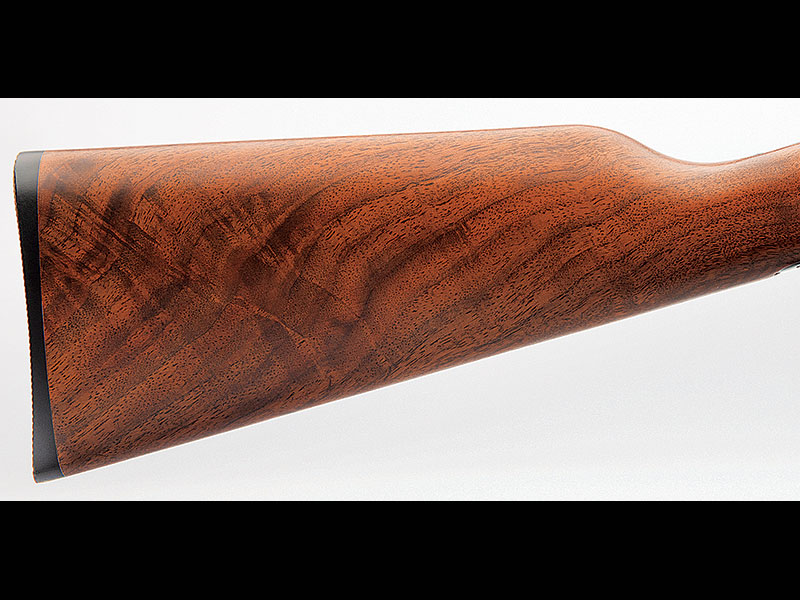 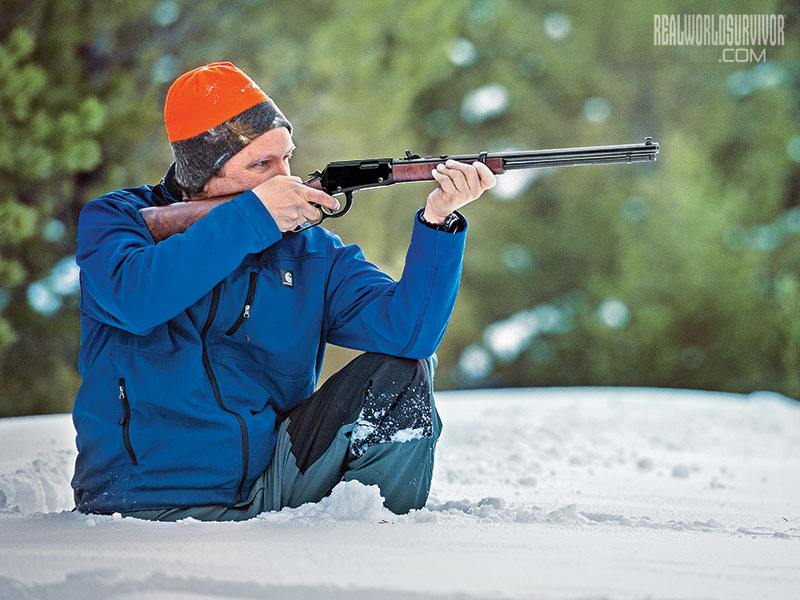 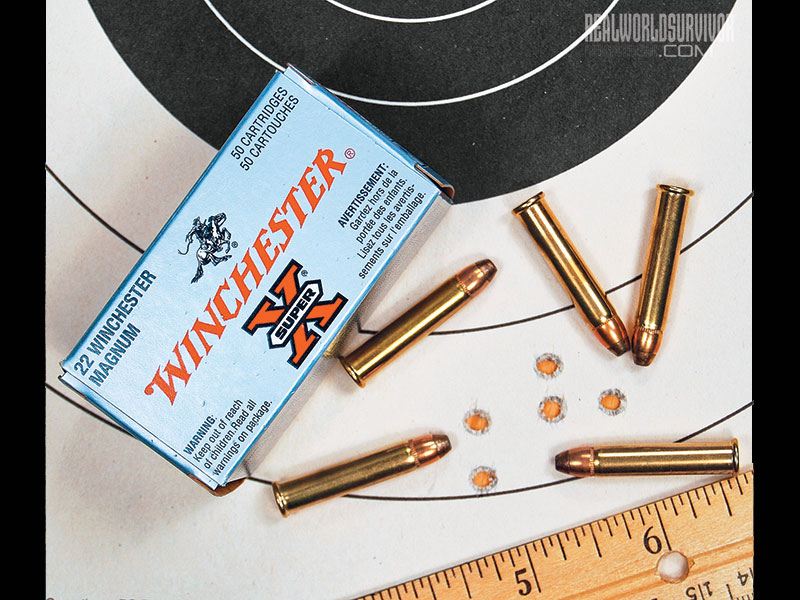 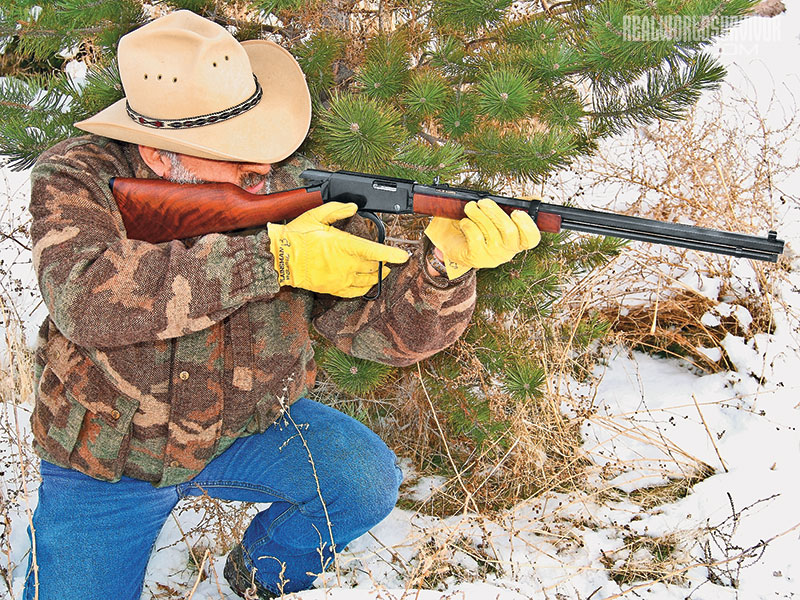 11 of 11
Photo by Bill Buckley
Golden Boy Comparison
The author found the action was as smooth as a Henry Golden Boy. Top-grade, through and through! 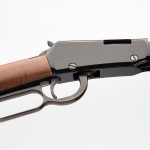 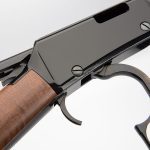 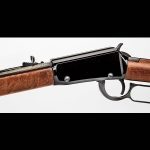 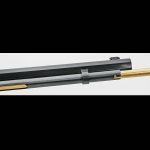 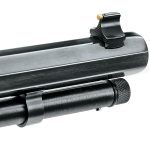 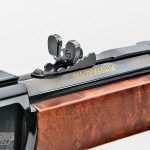 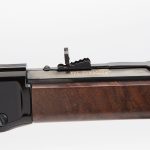 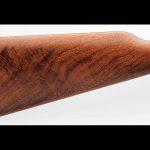 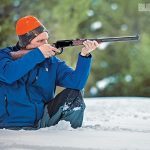 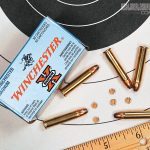 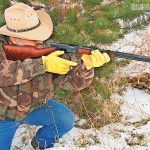 In the lever-gun section of the official Prisbrey Encyclopedic Dictionary of Firearms, when you look up the definition of “smooth,” it starts out with “Henry” and pretty much ends up with “Henry.” The company has built its reputation on that word, from its early rimfires to the more recent centerfire models, and when you cycle a Henry lever-action rimfire for the first time, you truly begin to understand the term. Over the years, I’ve worked with several Henry rimfire lever guns, and each one carried on that tradition, without exception. Where you can feel other designs working to get through their various stages of extraction, cocking, feeding and chambering, these Henrys typically just glide their bolts along on oiled glass. If you’re a fan of both Old West tradition and a mild-mannered caliber you can actually afford to shoot, you owe it to yourself to check one out, especially if you’re a varmint-buster or hunter of small game like rabbits, squirrels and similarly sized critters that don’t require 10X optics and velocities of 3,000 fps.

America’s most beloved cartridge, the .22 Long Rifle, is the first entry in looking up “fun” in that same dictionary, but stepping up to the .22 Magnum boosts performance without also boosting any significant discomfort to your ears or shoulders. The wallet? Admittedly, yes, but the longer .22 is more of a specialty caliber and more of a dedicated hunting proposition than a plinker.

Magnum Rimfire
The .22 Magnum, pedantically referred to by its formal designation as the .22 Winchester Magnum Rimfire in more long-winded circles, was introduced in 1959 and until the advent of the relatively recent .17 calibers was the rimfire powerhouse for the popular market in several handguns and rifle action types. The .22 Magnum’s longer dimensions and thicker case walls safely contain pressures that its older .22 LR cousin can’t, and the .22 Magnum also uses modern, conventional jacketed bullet types that seat inside the case mouth without the need for the shorter rimfire’s heel-base lead bullet and exposed lube. Besides offering increased range and terminal performance, the jacketed .22 Magnum loads are also cleaner to shoot, leaving no lead or lube deposits from high-volume shooting between cleanings.

Originally, there wasn’t all that much variety, but that’s changed, and the .22 Magnum now gives us a wider choice of bullet types that can add up to 800 fps over a standard .22 LR and with near-explosive effects in some cases on small game. Few experienced .22 LR hunters will expect much in the field beyond 75 yards or so, but with a good bore and either good eyes or better glass, the .22 Magnum can easily be a true 100-yard proposition. Granted, .22 Magnum ammo can be harder to find than the ubiquitous .22 LRs, but it is still cheaper than most centerfire ammunition, much quieter, much easier for those of lesser height and age to manage, and the .22 Magnum round isn’t intended to be a 500-round-per-session blaster anyway. If you like what it offers as an intermediate-range small-game hunter, you’ll find a source for it somewhere.

Frontier Model
Built as a slightly less expensive alternative to the company’s Golden Boy .22 Magnum, octagonal-barreled lever gun, the new Frontier model is essentially the same rifle but with a more subdued dark receiver cover instead of the bright and potentially game-spooking Brasslite version used on the showier gun.

Using a 20-inch barrel as a compromise to keep velocities up and weight down, the Frontier features Henry’s typical quality, from the polished and uniform bluing to the nicely figured and fitted American walnut furniture it wears. The metalwork is well done, with no external tool marks visible and flat barrel flats with straight corners. The wood on the stock sits slightly high around the upper and lower tangs, but without gaps, and the area that always indicates attention to detail on a quality rifle to me, the fit of the black synthetic checkered buttplate to the wood (a small inspection point that doesn’t affect function but does show the commitment of the maker), was perfect.

Inside, the Frontier came fully packed with the usual amount of Henry smooth, along with a nearly full-length magazine tube and the capability to tote 12+1 rounds onboard for an afternoon stroll through the woods. I freely grant those who prefer detachable-magazine-fed rifles as hunting guns their right to those preferences, but I happen to be among a different demographic that finds the combination of no protrusions at the natural balance point for carry and the very practical capacity of an under-barrel tube to be a much better way to carry out business—not to mention the infinitely smaller chances of losing a magazine that doesn’t detach in the first place.

Also inside, despite the outline of the Frontier and its operation being totally conventional, the guts are their own deal; Henry doesn’t reproduce or copy earlier classics internally and uses a totally different mechanism. What looks like, and would be, the frame or receiver on any other lever gun is only a removable action cover, which is why and how it can use a non-ferrous, powder-coated cast alloy that obviously isn’t as strong as steel, but doesn’t have to be, and costs less to mold than steel does to machine. The actual receiver’s inside, and the system is more than strong enough to hold up to extensive use. The barrel band, a non-stressed part, is made of the same material.

Up on top, Henry stays with the Marble fully-adjustable, steel, semi-buckhorn rear sight and the tall, brass-beaded front blade used on its other higher-end models, and while I don’t have much fondness for either the rear notch or the white diamond painted under that notch, the bead’s highly visible in most lighting. This setup also provides options for fine-tuning with a small removable insert between the buckhorns that can be raised or lowered slightly to mate more precisely with a given load than the coarser step-elevator can do; it gives a choice of a larger notch on one end and a smaller one on the other, and it can be repositioned with the diamond facing to the front instead of the rear. This is actually another versatile feature of the rifle, and these sights are fairly popular in use by other makers, too, so my likes or dislikes there certainly aren’t binding on anybody else.

The maker proudly wants you to know where the Frontier’s made and to have no confusion whatever over its caliber, so barrel stampings showing “Henry Repeating Arms—Bayonne NJ—Made In USA” and “Cal .22 Magnum” are both stamped large and filled in with gold just to avoid any doubts.

Related Stories: Your Guide To Town And Country .357 Magnum Revolvers

To The Bench
On a sunny, 18-degree December day, I ran four different loads through the Frontier from a bench to test its accuracy at 50 yards. The rifle was 100-percent reliable, with neither hitch nor glitch in feeding, extraction or ejection. Fired out of the box, with no additional lube, the Henry cycled exactly the same, whether hot during strings or cold between strings while I measured groups and the rifle had time to cool down again.

The sights were up to the job on paper, using the top of the circle aligned with the top edge of the semi-buckhorn rear, but in certain lighting angles both the bead and that white diamond can glare a bit. I find the diamond that is intended to quickly draw the eye to the notch above it more of a distraction than a benefit, and on a personal keeper I’ll either black it out with a felt-tip pen or reverse the insert entirely if I’m feeling energetic. Here, I shot the gun as it came, as a test of how the factory sets the model up. On a centerfire rifle used for larger critters, the bead’s typically placed in the center of the dark fur, where it stands out well against a dark background, and it’s a more efficient system than trying to locate the tip of a conventional black post against an equally black hide; but on smaller fur at 75 yards and farther, the bead can entirely cover what’s inside the fur, so that center-of-varmint sighting method doesn’t work as well. Still, it’s not a deal killer, just an adaptation in the field. Those interested in glassing the rifle can do it; Henry includes mounting grooves in the action cover, and that should easily take the Frontier out another 30 yards.

The Frontier’s trigger pull was very clean and broke at a consistent 3.5 pounds—a definite factor in the sandbagged accuracy of the rifle. One oddity that did crop up was the puzzling tendency of the Remington Premier 33-grain AccuTip load to fully keyhole on the bullseye targets, which obviously wasn’t conducive to creating tiny groups. I’ve not encountered this before with the Remington ammunition, and neither had Henry’s president, Anthony Imperato, when I asked. His thought was that such things are often caused by a defective muzzle crown, but under a 10X jeweler’s loupe, I couldn’t find any dings, dents, scrapes, scratches, chips or missing chunks, and the other three loads were all capable of holding five holes under 2 inches, so that one remains a head-scratcher and an illustration of why you test things on paper before you hit the trail with them. Some guns just don’t like some loads, and for whatever reason that bullet apparently wasn’t stabilized well enough to fly straight in this one.

There are more “modern” rimfire rounds, and more modern rifle designs to shoot them through, but the .22 Magnum still has a place, and if you’re as much of a sucker for a good lever gun as I am, the Frontier deserves consideration for a slot in your truck rack or safe. Few rifles can carry as naturally in the hand as a trim lever gun, and this Henry is a natural for the trail. For more information, visit henryrifles.com or call 201-858-4400. 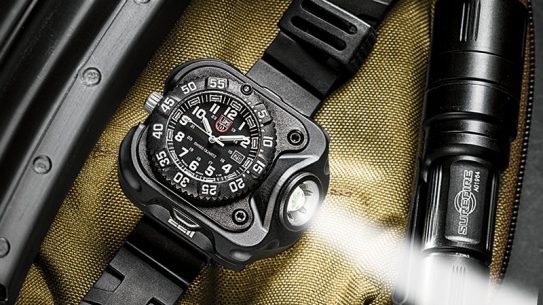 Light up the dark woods or abandoned road with this powerful, hands-free beam.