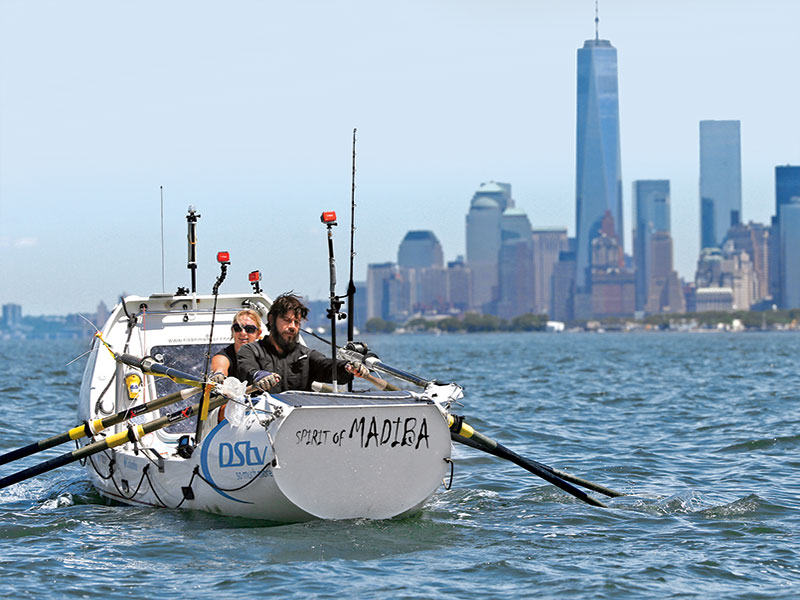 One couple endures six months of Mother Nature’s wrath in the Atlantic.
Comment(s)

Riaan Manser and his girlfriend, Vasti Geldenhuys, 40 and 36 respectively, set out across the Atlantic Ocean from Morocco on December 30, 2013, and made it to the Statue of Liberty nearly six months later in a custom-built 23-foot rowboat. That is 133 days at sea, 74 of which were beyond the sight of land. They had no support ship and rowed by day while watching movies on a laptop at night. They estimated that the trip required about 3.6 million strokes on the oars.

“We were naïve,” Manser said. “We thought the Atlantic would be this calm, little pond that you just row across. By the fifth day we were saying to each other, ‘What is going on?’ The sea was very, very, very angry.”

Modern technology made the trip a bit more bearable for Manser and Geldenhuys. The couple had a solar array for power, modern navigation gear, a weather station and a desalination device to make seawater potable. Their food consisted of freeze-dried rations and whatever they could catch while fishing.

The couple’s route took them to the Canary Islands, Barbados, the Bahamas, then Miami and on to New York. They averaged a speed between 1 and 3 knots, and they narrowly avoided disaster on several occasions. Two months into the trip, the boat capsized in a storm, trapping Geldenhuys underneath and throwing Manser overboard. On another occasion, weeks later, Manser drifted away from the boat while swimming and was retrieved only after fortuitously snagging their fishing line.

How does one learn the skills necessary to row a boat from Northern Africa to New York City? Geldenhuys works as an attorney and Manser is a professional adventurer. He was the first man to circumnavigate the periphery of the continent of Africa on a bicycle. To a degree, when you wish to undertake something this outlandish, you just prepare as best you can and then jump right in.

However, anyone contemplating such an undertaking should proceed soberly and methodically. Any time you decide to poke Mother Nature with a stick this big, don’t be surprised if she pokes you back. The resolve, dedication and daring that these two adventurers demonstrated in this nearly six-month undertaking are undeniably admirable. The basic physical fitness required to propel such a craft 3,600 miles borders on the unimaginable. Once you edge your way out into harm’s way in the outdoors, it takes only the simplest of mistakes to place you in a life-or-death situation. When undertaking any long-term journey like this through the untamed outdoors, you must realistically understand that injury or death is always a possibility.

What’s next for Riaan Manser and Vasti Geldenhuys, the couple who marked the 14-year anniversary of their relationship by rowing across the Atlantic from Africa to New York in a 23-foot rowboat? “Maybe get married and have children,” Manser said. “That seems difficult to me.”