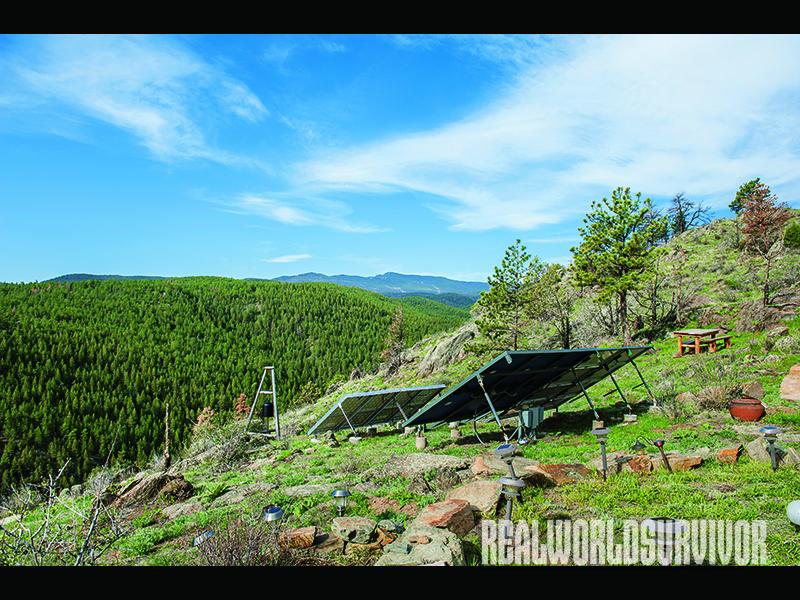 1 of 5
Photo by Thomas Kirchen
Solar Energy Arrays
Without the solar energy from these two arrays, life in these rugged mountains would be a step back into the pioneer days of the 19th century. 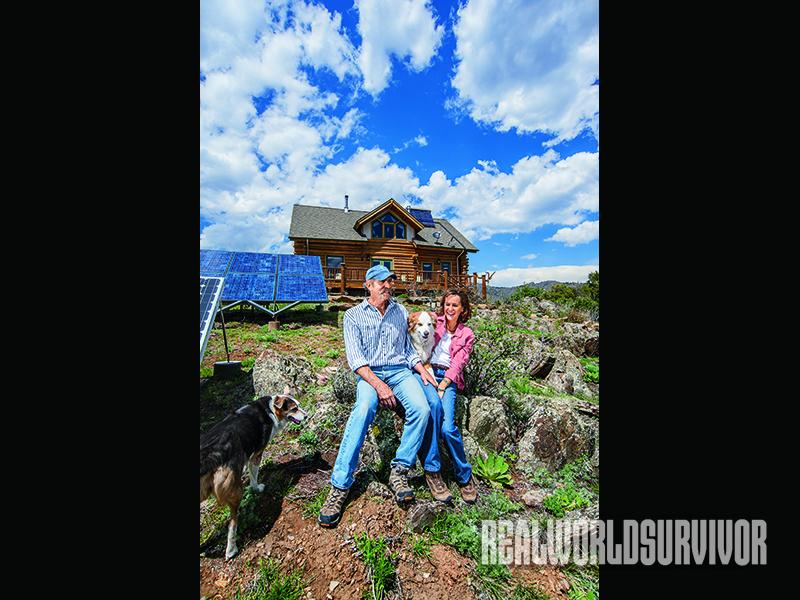 2 of 5
Photo by Thomas Kirchen
LaVonne and Rex Enjoy A Sunny Day
People and dogs need sunshine, too. LaVonne and Rex take a few minutes to enjoy a banner solar day with their dogs, Tazi and Maggie. 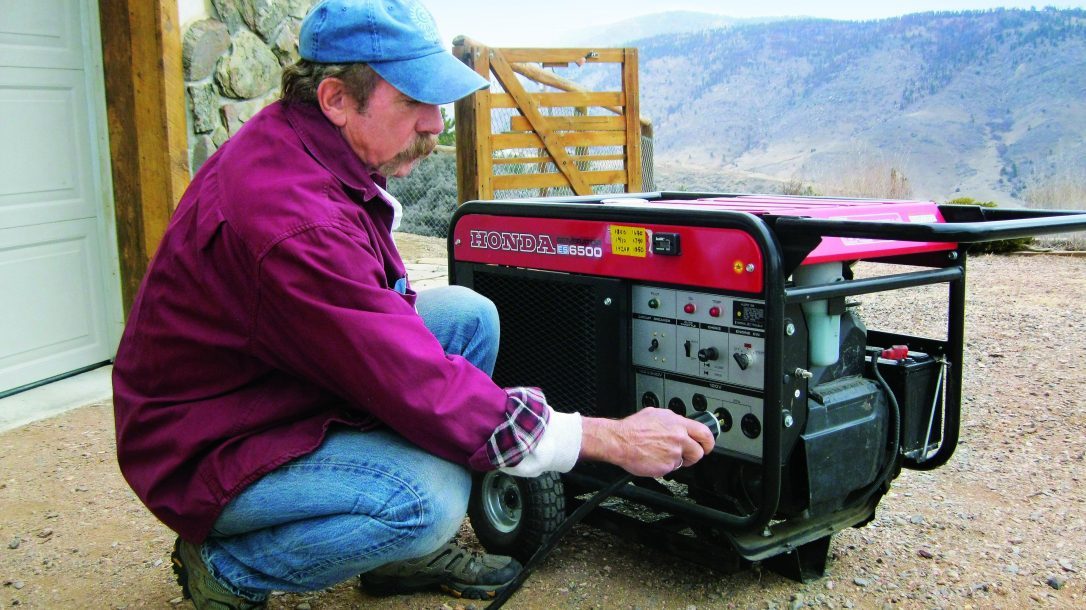 3 of 5
Photo by LaVonne Ewing
2.Rex-plugging-house-into-generator
The author plugs in his trusty Honda generator, which he tries to use as seldom as possible. He has three backups, but the Honda is his favorite. 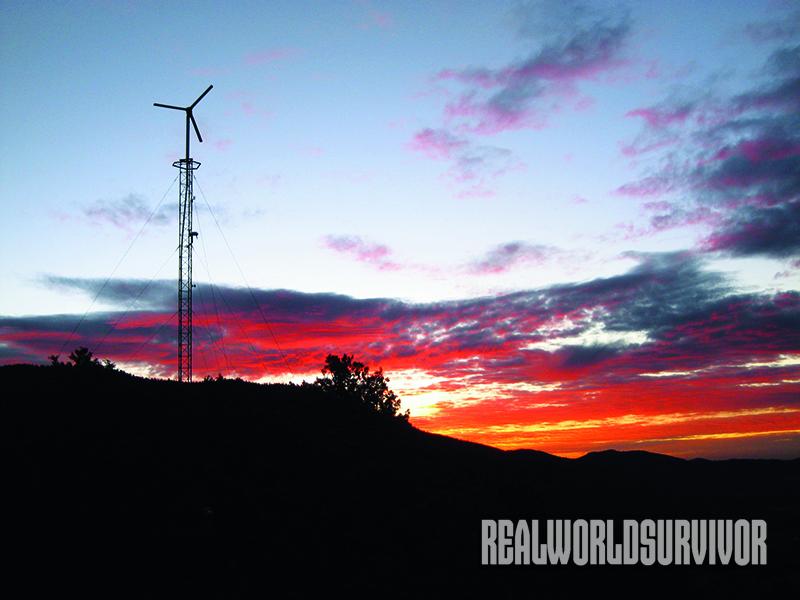 4 of 5
Photo by LaVonne Ewing
LaVonne Ewing Sunrise
Sunrise; Each morning the author checks the skies to determine how great are the chances there will be enough wind during the day to turn his wind turbine. 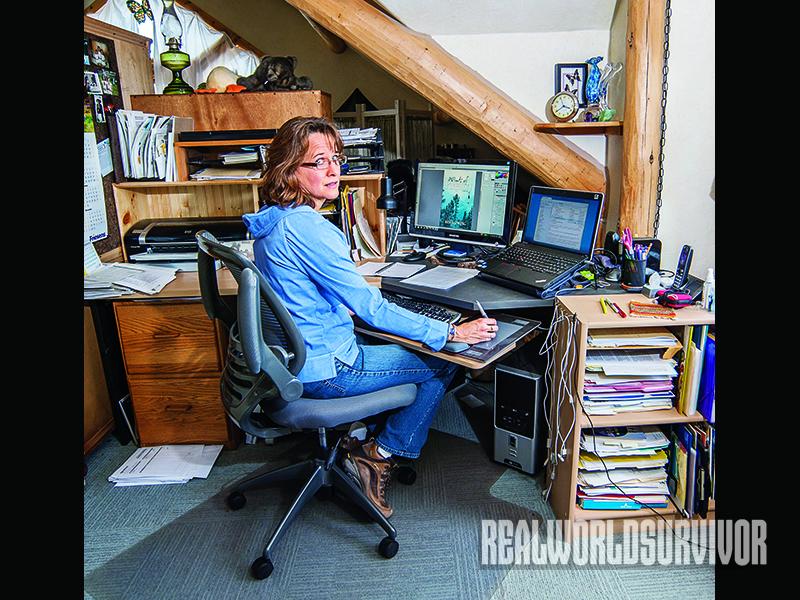 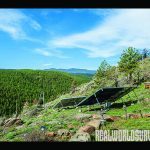 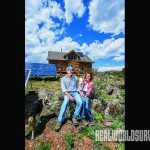 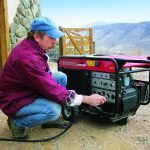 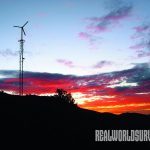 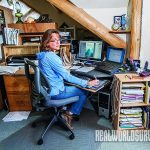 The term “off-grid” evokes different mental images for different folks. Some imagine rugged individualists who have been freed by their solar arrays and wind turbines from the tyranny of the establishment’s power-generation apparatus. Others see a bunch of backwoods hicks holed up on the fringes of civilization with sheds or basements full of leaky, smelly batteries.

The truth is, most of us are a little of both. It’s impossible to live off-grid without feeling a certain sense of self-sufficiency, knowing that you’re getting by just fine without a giant corporation’s electric meter bolted to the side of your house. And it’s a feeling that is compounded several-fold every time the power grid goes down, leaving our grid-dependent neighbors shivering in the dark. But there’s also a bit of boondocks tinkerer in all of us; it’s a survival trait that spurs us on, day after day, year after year, in an unending quest to perfect the art of off-grid living, a venture fated to forever yield imperfect results.

Whatever off-grid living may or may not be, it is fundamentally different from on-grid living. Once you go off grid, you will find that your mind is continually processing information involving weather conditions and solar and wind charging possibilities that will enable you to make the most advantageous decisions regarding the day’s activities.

Every off-gridder I know, my wife LaVonne and I included, begins each morning by assessing the solar and wind conditions that will likely prevail that day. Clouds in the east but not in the west mean it’s clearing and there are good prospects for sunny weather for most of the day. Clouds in the west portend an increasingly overcast sky. Cirrus clouds directly overhead often mean a pressure ridge is building along the “Front Range” where the mountains meet the plains, signifying a strong chance the day will be a bust for solar energy.

After that, I check the battery meter to see how many percentage points we lost in the night. As per my programming (which only takes into account half the theoretical battery capacity), a percentage point on the TriMetric for either of our two identical battery banks—each comprising twelve 400-amp-hour L-16 batteries—registers as approximately 0.14 kilowatts hours (kWh) of available power.

If the meter indicates 100-percent charge at sunset the previous night, it will be in the low 90s by bedtime and, on a windless night, will lose another seven to nine points by sunrise. In other words, on a typical fall or spring day, our house will consume roughly 2 kWh of power from dusk to dawn.

Any meter reading above 85 percent indicates that it was at least somewhat windy in the night. This usually means there is a better-than-average chance the wind will pick up again as the day warms—even if there is little or no wind at sunrise—and therefore our 1,000-watt Bergey XL1 wind turbine will figure into the day’s energy equations.

The ongoing goal of every savvy off-gridder is to draw from the batteries as little as possible. The best way to do this is to restrict the use of high-wattage tools and appliances to times when it’s windy and/or bright and sunny. In practice, this is pretty much impossible. In our system, an 11-amp, 240-volt well pump is wired to a pressure switch that can be automatically activated any time of day or night. It takes the pump six minutes to fill a 30-gallon pressurized tank, using about 0.25 kWh—nearly two battery percentage points—in the process.

Then there is breakfast, which we take before sunrise most of the year. It is always a battery-battering affair involving a coffee maker, toaster and microwave. Invariably, breakfast draws the batteries down two to three points, but neither is it optional, making it a fact of life that no amount of fretting about can ever change.

It’s up to me to decide what powers breakfast—batteries or generator. Unless both battery banks are down and/or it’s cloudy out with no apparent chance of becoming otherwise, the batteries pull the duty. Whenever I do wheel out the Honda (maybe one day in 20), it provides a steady 3.1 kilowatts, which is enough to add four to five points to the batteries, in addition to the energy it provides to prepare our morning meal. The problem is, the purist in me considers it cheating, a feeling that intensifies if, as often happens, the heavy skies later burn off in spite of my careful divinations to the contrary.

Within a half hour of sunrise on a typical cloudless day there is enough sunlight hitting our solar array to keep the batteries charging, even with two home offices up and running, and by mid-morning the array will be cranking out nearly 2 kilowatts. If the wind turbine is also getting in on the action, so much the better. It’s harvest time.

Whenever possible, we save our high-wattage activities for the period from two hours after sunrise to two hours before sundown. When it’s sunny out, there is very little we can possibly do during the middle part of the day to prevent the batteries from reaching full charge.

By the time the sun begins inching its way toward the western mountains, we suspend our high-energy activities for another day. Computers are shut down at or soon after sunset, leaving only compulsory loads such as the fridge, freezer and the well pump, or small loads like the iPod stereo system, to run during the evening hours. The only exception to this self-imposed miserliness is the TV and its peripherals, which together consume less than 100 watts and are rarely on for more than two or three hours.

The off-grid lifestyle may seem a terrible inconvenience to anyone currently living with an inexhaustible supply of energy, but for us it quickly became a lifestyle to which we soon adapted without complaint. It is an ancient way of life, after all, and one that follows the silent drumbeats of each day and each season.

For most of human history darkness and sunlight, along with rain, snow and fair weather, were all elements that naturally constrained or enabled our ancestors’ activities. It engenders a sense of humility in the face of nature that appears to have been all but lost—and at a very dear price—to an age of easy and abundant energy.

This, more than anything, is the reason LaVonne and I remain off-grid, despite the fact that grid power has now crept to within a few hundred yards of us. 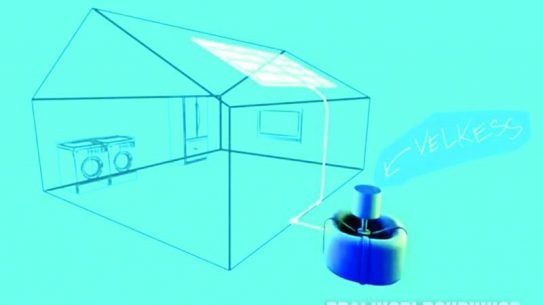 If you’re going off-grid you can’t live without batteries no matter how much you’d...